Cedar faces the challenge of meeting “the one” with her typically unflappable attitude.

Cedar found a job–as an astronaut, which was her wish, not mine. I would have chosen an artist or writer for this creative Sim, but as soon as I selected “Find a job,” the thought-bubble of astronaut appeared, and she is enthusiastic about her career, talking about space and thinking about her identity as an astronaut often. For a Sim who loves the outdoors, living al fresco is a true source of happiness.

“And this our life, exempt from public haunt,
Finds tongues in trees, books in the running brooks,
Sermons in stones, and good in everything.
I would not change it.”

Cedar, are you quoting Shakespeare? I thought you were a goofball–where comes this flux of poetry?

Cedar was so happy living outdoors. I’ve made a pact with her that we will keep the outdoors dining area and we’ll have her bed out in a back courtyard, too, even when we’ve got the money to build a house.

The first part of Cedar’s young adulthood was focused on building her career and earning enough money to pay the bills. About halfway through young adulthood, she decided it was about time to start meeting her soulmate, someone with whom she could build a future and a family. Time was ticking, and since I wanted her to get together with someone she truly loved, I was beginning to feel a little nervous.

Thus began a new daily routine: home from work and off to a park or a lounge, someplace where she could find prospects. 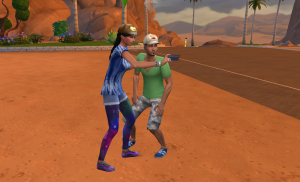 She met River Best at the park in Oasis Springs. His name is cool–a name that a nature-lover would like. And he’s cute and family-oriented. But he’s also hot-headed, so I wasn’t sure if he’d be a good match for impish Cedar. Her pranks might drive him nuts!

The lounge was full of elders.

Cedar enjoyed telling jokes, enthusing about space, and getting to know everyone around town, whether they were younger, older, single, or married. Cedar wasn’t worried that one day she’d find her true love, but I was starting to get a little worried, and time was ticking. Cedar had still not rolled a romantic or flirty wish for any specific Sim, and I always like to respond to my Sim’s romantic whims, rather than initiate something on my own. Still, I decided it was the right moment to give a little nudge in the right direction…

So, on her next day off of work, a steamy shower followed by a trip to the Willow Springs park seemed in order.

The gardeners were all flirty.

Cedar enjoyed meeting the gardeners, and one of him (the one seated) seemed into her. Time passed, Sims passed by, the sun set, and in the moonlight, Cedar found herself playing chess (and winning) with Timothy Milton.

Tired and uncomfortable, Cedar still can’t bring herself to leave the chess game with Timothy.

I liked Timothy a lot–he’s cute. He’s a loner. He’s family-oriented. To me, those seem like great traits. But would Cedar like him? She seemed to. Before I let things progress any further, I checked to see if he was townie. Yup. A consultation of “manage household” revealed he was “currently not in world.” Joy!

The next step, invite him over. I decided to put her in the flirty hat and sit back and see what happened.

A little fiddle makes for a great first get-together. 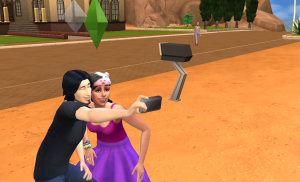 Timothy captured the moment of their becoming lovebirds with a selfie.

During this visit, Cedar learned Timothy’s third trait: goofball. What? Goofball? Really? Could life be sweeter?

I could not believe my luck. I felt like the Maxis gods were smiling at me and Cedar. Here was the perfect guy: eligible

Since Cedar’s lifetime aspiration is soul-mate, she needed to have a few dates and initiate 10 kisses to reach her first milestone. Time to get started racking up the aspiration points!

The first kiss was sweet–as first kisses should be.

Successful dates can really tire a gal out!

I had no idea that TS4 dates lasted so long! Cedar was really tired from a full day of being an astronaut, so before the date was over, she napped on the ottoman. It was ok with Timothy, though. As a loner, he was perfectly happy to take a little break by himself and read. 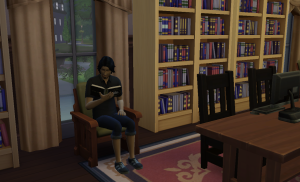 One more date, a few flirty visits at the gym, and I decided it was time to move Timothy in. Since Cedar was at the gym when she asked him to move in, he popped over to the home lot while she still had to travel back home.

As soon as we checked in with him back on the home lot, we found him doing what every woman dreams her live-in boyfriend will be doing…