That time of year thou may’st in me behold
When yellow leaves, or none, or few, do hang
Upon those boughs which shake against the cold,
Bare ruin’d choirs, where late the sweet birds sang.
In me thou see’st the twilight of such day,
As after sunset fadeth in the west,
Which by-and-by black night doth take away,
Death’s second self, that seals up all in rest.
In me thou see’st the glowing of such fire
That on the ashes of his youth doth lie,
As the death-bed whereon it must expire
Consum’d with that which it was nourish’d by.
This thou perceivest, which makes thy love more strong,
To love that well which thou must leave ere long.

In other words, knowng that Acacia will be leaving soon, we love her all the more. The family has been spending as much time together as possible.

Yup. We got the first warning that her time is almost up.

She quit her job as a watercolor dabbler so that she could spend her last days doing what she wanted. And what she wanted was to spend time with her family, explore science, paint, and play Sims Forever. All of her favorite things! “I can’t believe it. One of my Sims just died. Oh, heartache.”

She took selfies with her chldren. So touching! I’ve noticed in other legacies that parents whose time is nearly up take lots of selfies with their kids so that their children will have happy photos to remember them by. “My mom is the coolest mom on the planet.

Manzanita has become Acacia’s second shadow, wanting lots of hugs, lots of deep conversations, lots of chat. I was so moved, that even though I took dozens of screenshots in my mind, it seems I failed to take any in actuality. “Mwahahaha! Your impending sadness brings me such glee! This is what I orchestrated all those ‘tender’ moments for!”

Acacia catered Kyler’s elder birthday party. From sheer enthusiasm and an overabundance of love, she made two cakes and started a third!

The best birthday present for a Soulmate Sim.

Acacia has enjoyed getting to know Cassandra. She seems happy that her son has found a woman of quality.

Cassandra, for her part, has been enjoying getting to know PV’s family. She and Uncle Mesquite share a special bond through their love of music.They are also irresistibly attracted to each other. I’ve decided not to interfere. I won’t encourage it, but I also won’t cancel out free-will romantic interactions from their queue.

I figure that Mesquite deserves to connect with a woman who’s his intellectual and emotional peer. Besides, maybe I rushed Cassandra into this relationship with Palo Verde. 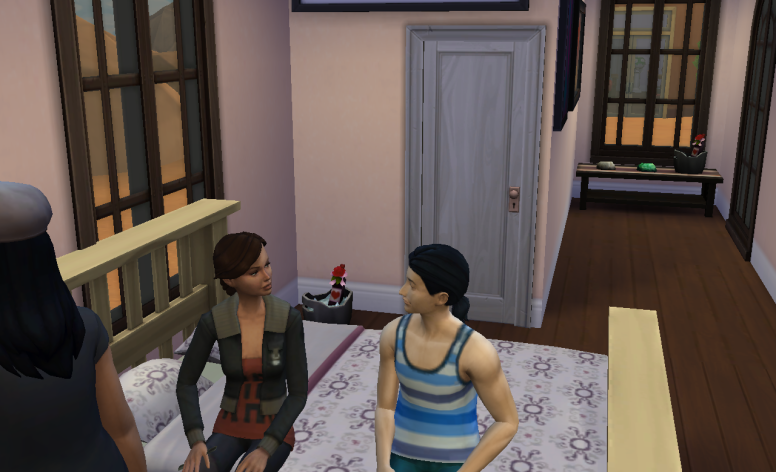 “You like Brahms, too! Oh, the theme of his third symphony, ‘Free and alone!’ That’s been my song for so long. But now, I don’t know. I’m starting to understand his romantic side, too.”

Acacia seems wise to what’s going on, and she is careful not to leave Mesquite and Cassandra alone for very long. “You do realize that he and Clara Schumann burned their correspondence, don’t you? There’s something to be said about discretion, even in the truest love stories.”

But Mesquite still seems to love Anya, in spite of whatever this is he feels for Cassandra. “It’s complicated. I’m not one who’s used to being tied down. I love PV. And yet I can’t deny this connection that I feel with Mesquite.” They shared their first kiss. It’s not too sudden, PV! I had not dared to hope for this–I planned that, being noncommittal, she would just live at Cradle Rock and have PV’s lovechild, if PV were the heir.

I wonder if Cassandra is rushing into this so that they can have the wedding while Acacia is still around. Or maybe, she became afraid of whatever it is that’s going on between her and Mesquite. Or maybe, she just loves Palo Verde and wants to be his wife. “I love Cradle Rock, and I want to stay here and be part of this family. Mesquite is already married to Anya, and he and I can share our special bond while I enjoy being married to PV. This is going to work out!”