During Manzanita’s birthday party, when Acacia suddenly left her post as caterer to keep her date with Grim, the Oasis Springs Catering Services immediately filled the vacancy. Meet Princess Watson. 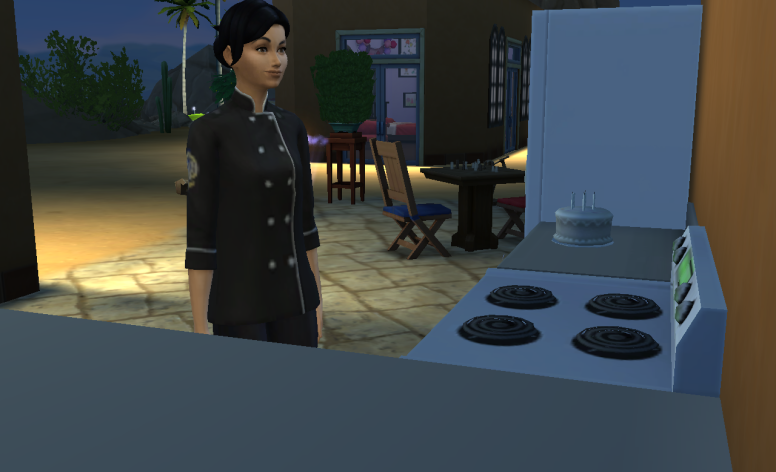 “In the kitchen, I have the royal touch.”

I was immediately smitten. Look at her! She looks like Audrey Hepburn in Roman Holiday. She’s gorgeous.

Paris introduced himself to her, and she’s so cute, with such a great name, that I decided, what the heck. Let’s throw out a flirt. Paris impressed her with his video game prowess, and the Princess swooned. She is a geek! And she is modeling clay in his hands. I have never seen a Sim gal fall so suddenly, so deeply, in plum-love with a Sim before.

She doesn’t care that his time is almost up. She looks at him, and she thinks one thing: “Let’s put the woo into who!” 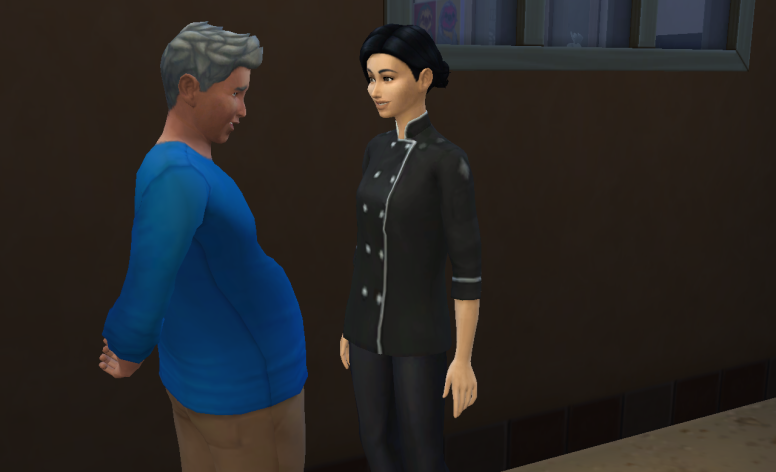 She is perpetually flirty around him. And Paris doesn’t seem to mind.

Who am I to question May to December? Let’s give Paris some fun during his last few days. “Shoot me with your video game prowess!”

They have been adorable. You know this happy dance means only one thing! Score!

And I’ve fallen in love with Princess. I think that I’ve transferred some of my affections for Acacia onto her. It’s like with friends I know: a cat dies and they replace it with two kittens! Poor Paris is red plumbob tired. But look how rejuvenated Princess is!

I had Paris ask her to move in.

I know, I’m crazy. It’s a full house again, and PV and Cassandra will need to have at least one kid, two to be safe. And Manzanita doesn’t have plans to move out any time soon, and she’ll need to move in a boyfriend or girlfriend eventually, to make progress with her aspiration.

But we have one open slot–and Princess is taking it! It will help me face the coming losses of Paris, Kyler, and Mesquite if Paris’s spot as caretaker is filled by funny, beautiful Princess Watson. “It’s like a dream come true for this ‘Currently-not-in-world’ gal!”