I’m the only one grieving Palo Verde, unless there are a few heart-broken fans of the Royal Llama Tamer out there. The rest of the family is just fine. Cassandra, since she pled with Grim, didn’t get the grieving moodlet, and everyone else was busy doing something. So far, no one has even gone out to mourn him. 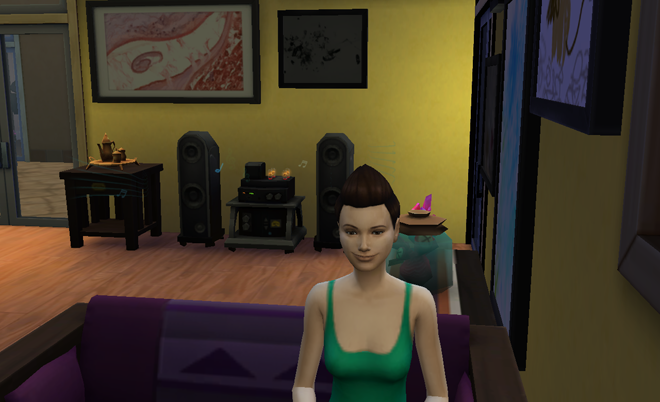 “Don’t feel bad that we’re not sad, CathyTea. This is how Dad wanted us to remember him, by smiling on the inside at the jokes he told.”

Ironwood had his young adult birthday the day after PV’s demise. He rolled creative–a great trait! It’s a bit of surprise for me, as I never really pegged him as the creative type, despite his being an artistic prodigy as a child. He seems happy with it. His renaissance Sim aspiration fits him well, for he gets to be a dilettant, rather than a specialist. 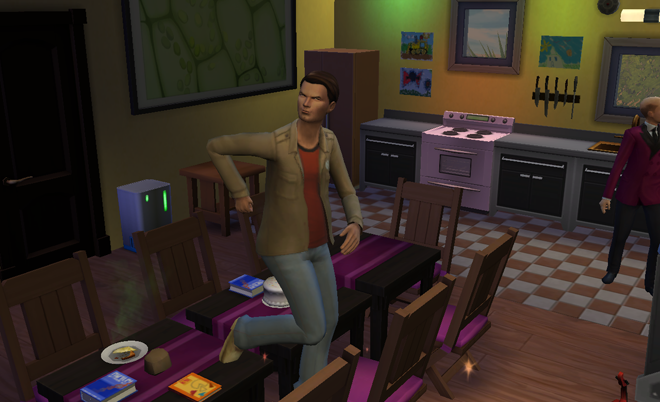 Spinning to adulthood in a cloud of green dust from spoiled eggs and toast.

When Saturday rolled around, the family decided to do something new, different, and radical: to brave the load screens and go to a community lot! 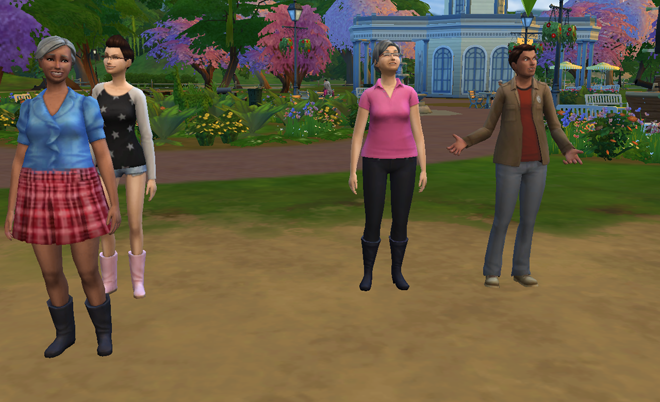 Cassandra: Ah the fresh air!
Willow: Ah, the flowers!
Princess: Ah, the blue sky!
I-dub: De moin! What? Why did we have to come here?

I seem to get the legacy family out about once or twice per generation, usually not until the eldest elder has met his demise and the youngest youngster has become a teen, which is exactly where we are with the family right now!

Everyone has something that needs to be done away from home.

Cassandra needs to earn 100 Simoleans in tips for the next milestone of her second aspiration.

Princess needs to find two more MySims trophies to complete a collection for the curator aspiration.

Sweet Willow needs to introduce herself to five more Sims for the first milestone of her Joke Star aspiration.

And I-dub. Well, it’s time for Ironwood to start looking for a mate. He’ll wind up being the heir if Willow doesn’t roll goofball when she becomes a young adult, and it’s not too soon to get started.

At the park, the Boughs were happy to see their cousins along with Aunts El and M. Yeah, someone in the family is always mad. I wonder why, Manzanita. Happy elderhood, Manzanita! I’m sorry I lost track of time and forgot to throw you a party.

Willow met this beautiful gardener playing chess, and she introduced her to Ironwood. 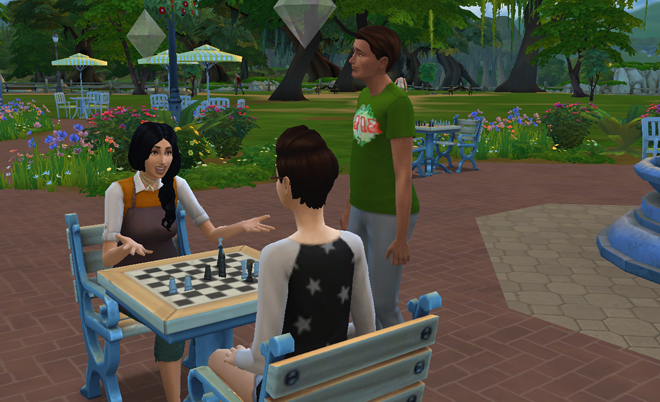 “So this is your brother? He looks like he just spun into young adulthood!”

Ironwood has never enjoyed a chess match so much before. Look at him! He’s all grins! (I love that he has inherited Palo Verde’s grin. That’s a gift from the squint-eye-square-jaw glitch that I will never regret! This smile lights me up inside!) 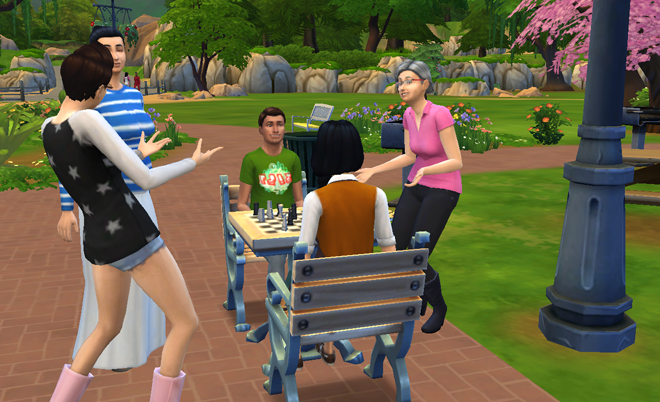 I-dub is thinking check-mate without the “check.”

Oh, my. Alivia is wonderful. So beautiful! She’s a foodie, so she appeals to I-dub’s glutton nature. They talked a lot about grilled cheese.

She’s cheerful, one of my favorite traits.

And she’s a geek,–a delightful trait, too.

I had never seen I-dub smile so much before! He completely forgot that he woke up one the wrong side of the bed that morning.

After the chess match (which drew quite a crowd), they enjoyed burgers, and Cassandra and Willow joined them. 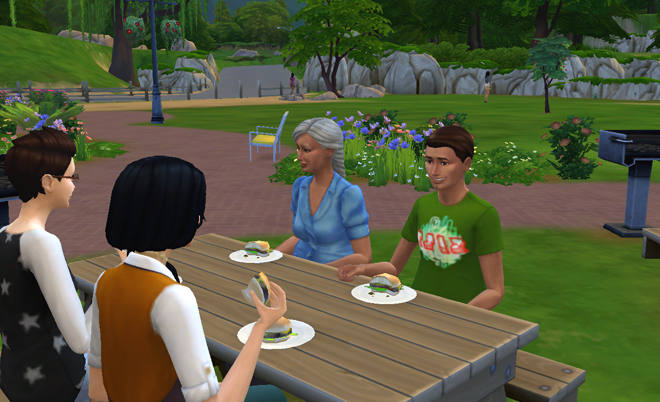 It’s starting to feel like cozy family time around the picnic table! “Is she just too beautiful to be true?” I-dub is wondering.

What a successful day at the park! Willow introduced herself to everyone she needed to. Cassandra earned her tips. Princess got a few more trophies, but not the ones she needed, alas. And I-dub met a beautiful gardener.

When he got home, I-dub invited Alivia, the gardener, over. I have my Sims move fast, for townies disappear overnight in my game. “She makes our kitchen look classy, don’t you think?”

They enjoyed dancing together. She can really bust a move TS2 style! 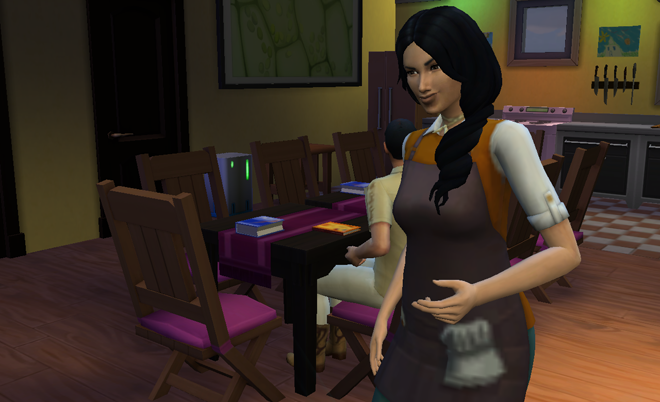 “Yeah, I’m just not feeling it. Besides, legacy-living is really not my style.”

So much for my matchmaking! I thought she was perfect–beautiful, wonderful traits, and she made I-dub smile. But I guess that while the friendship was strong, the sparks were just not there. “Hey! Not everyone’s cut out to be a Bough off the old tree!”

The next day, Alivia disappeared from the world and right out of  I-dub’s relationship panel.

Since there were few opportunities to flirt when the rest of the family was around, I sent I-dub out on a solo excursion to the museum the next day.

Of course, the cousins and aunties were all there. El was mad again, of course. (Thanks, Manzy.)

Before long, I-dub had a circle of beautiful women around him, including his cousin Kourtney in the yellow-striped shirt, who wasn’t too thrilled with his burgeoning mixology skills. Some of the women were mean, some were insane, and some hated children–but they all seemed to love Ironwood. 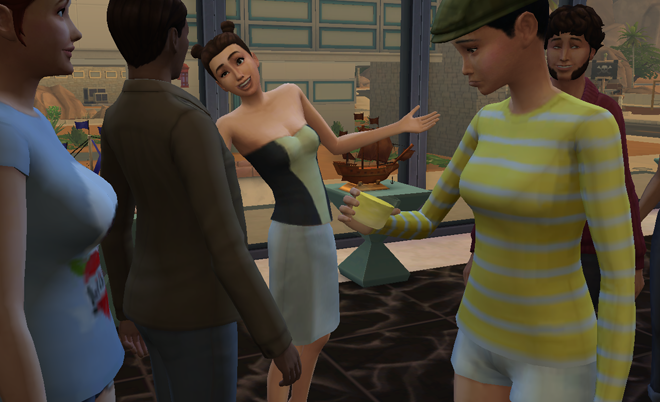 Kourtney: “I’m not so sure about this sweet and sour drink you fixed, I-dub. And that woman in the black-and-white you’re talking to? She’s insane.”

He chatted and viewed the art while the sun went down and his hunger meter turned yellow. At the park across the street, he grilled up some veggie burgers. Dining al fresco was never more fun! Before he left, he spied a young woman in a frilly party dress across the street.

Who knows? It never hurts to introduce oneself. 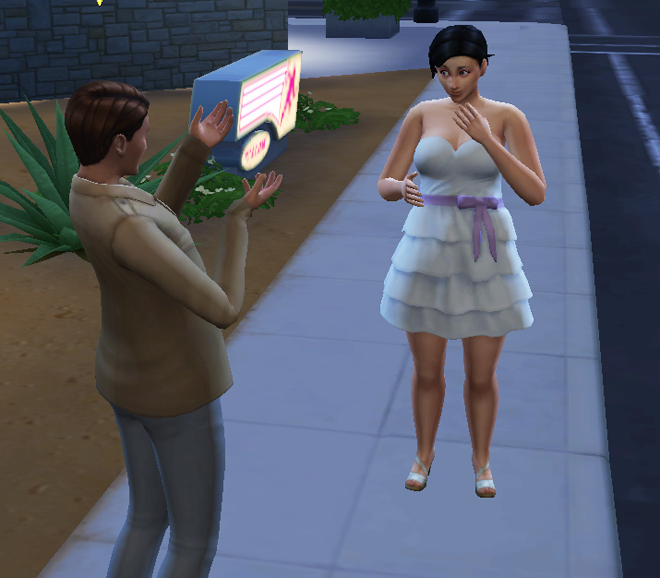 “Really? You think I look like a cupcake? Covered in sparkly frosting?”

She was a little flirty.

She enjoyed his jokes.

She revealed that she’s a bro. Wait… shouldn’t that be a sis?

And she’s gloomy. Ah, well. Dad was gloomy, and Willow is gloomy, too. It’s not the worst trait. It adds depth.

Best of all, she is all over I-dub’s flirts, and she can merr-ow like a she-cat on the prowl! 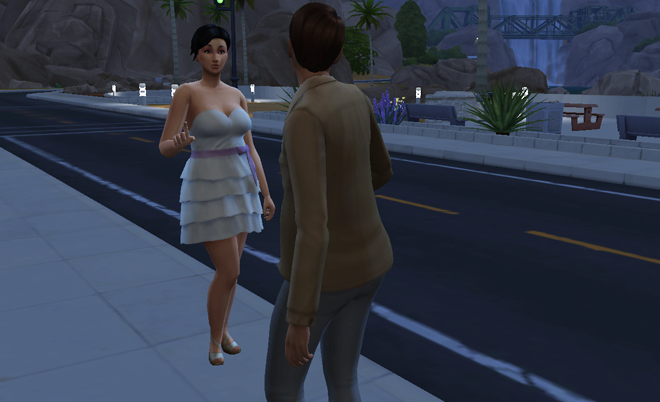 “A big boy like you. You like to lick the frosting? I’ve always liked a Sim with an appetite!”

So, maybe the solo excursion was not for naught after all!