The first official guests arrived on the first morning of Plum Day–and they’re kids! From the land of AkramA, these three “gnome kickers,” as they’re called, have come bursting onto the scene.

They won’t kick gnomes if they can dance instead!

For Dr. Jasmine, it was love at first sight. I’ve never seen her so excited to meet anyone as she was to meet little Philip.

Philip’s two friends, Dandre and Rose, are just as sweet as he is!

I met Dandre over the chess board and before either one of us said “Chok tee!” we were friends!

I was worried at first when I heard that these three kids would be traveling alone. They’re not even siblings–just really good friends, like Plum’s Three Musketeers. But they’ve been good as gold, and Dr. Jasmine has made them feel right at home!

Dr. J. dances just as hard as they do!

Their guardian wrote to us to say that as long as they had music to dance to, they’d be fine. And he was right! These kids dance wherever they go!

It really feels like Plum Day when you’ve got kids in the house!

They’re keeping us all happy just by being kids!

“So, Captain Plum jumps out of the space ship, and the planet he lands on is a big fat plum!”

I’ve been baking at the B&B to help Dr. Jasmine keep the fridge stocked. Little kids eat so much! And she’s expecting lots of other visitors in the next few days, too.

I’ve been baking so many cookies! That’s what Plum Day is all about!

For me, the best part about baking is watching how happy it makes others when they get to eat the cookies! I mean, look at Philip’s smile–wouldn’t you just do anything for that smile? 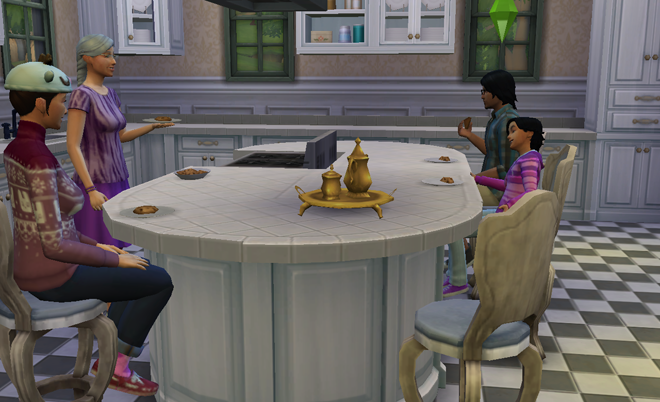 And the cookies disappear just about as fast as I can bake them!

After we had cookies and milk, we headed over to the Nunleys’. I still hadn’t met the whole family, and the Gnome Kickers wanted to get to know them, too.

Those kids just marched right into the Nunley’s house as if they owned it!

As soon as the kids heard the music, they started to dance!

That afternoon, we had our first Plum Fest book club at the library. Alex got into the holiday spirit by bringing his own glass of plum-nog with him. Not everybody thought it was cool to BYOB to the library! 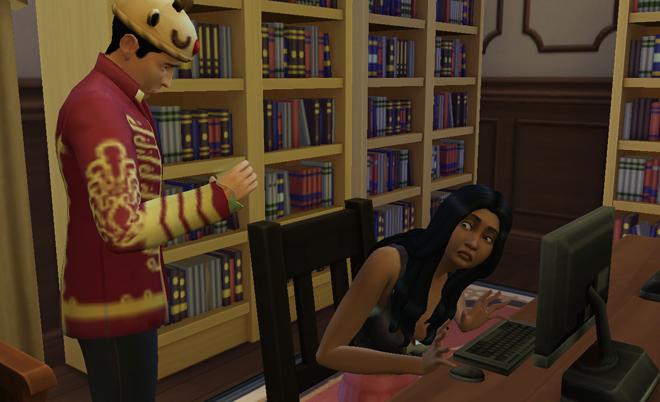 “Help! Librarian! This Goth kid is drinking plum-nog! In the library!”

It was such a beautiful afternoon that some of us read outside. Nina Caliente joined us, and I was pleasantly surprised by some of her observations about Andre Plum’s The Count of Monte Cristo.

“Listen to this, Forrest and Cathy Tea: All human wisdom is contained in these two words, ‘Wait and Hope.’“ 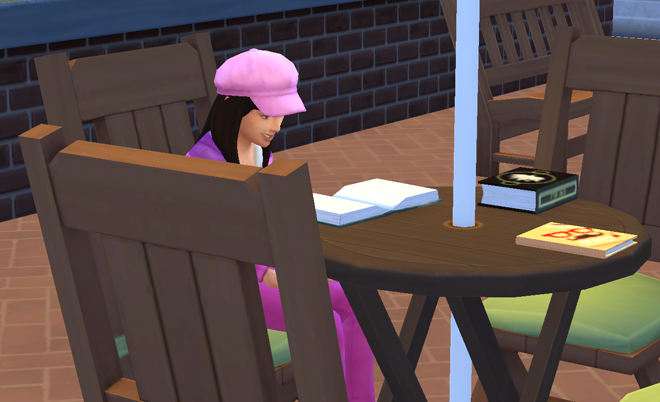 “It’s so exciting when he has to run from Fagen!”

Later, Dandre joined me and shared some of the new Plum-Plum jokes he was learning. Even though I was reading the sad part of Little Dorrit, he kept making me laugh.

“What do you get if you cross a plum with a man-eating monster? A purple people eater!”

Isabel Nunley really got into Plum’s Dombey and Son.

“It’s just amazing how the points he brings up about the distribution of capital are just as valid now as they were then.”

And Betsy Nunley seemed to be swept away by Philip K. Plum’s Do Androids Dream of Electric Sheep? “It’s a profound discussion of what constitutes consciousness.”

When I took the kids back to the B&B after the book club, I had a chance to meet one of the next guests that had arrived: Irene Diaz. We’d heard a lot of gossip about Irene–how she got pregnant with a married man, whose wife and daughter left him because of the betrayal. They’ve been called “home wreckers.”

We don’t know what makes other Sims do what they do, right? I mean we aren’t them, with their situations and their internal coding. So we all agreed we’d just approach her fresh–I mean, this is Plum Day! It’s all about acceptance of each of us, pits and all.

Rose and Irene bonded over watching ice-skating on SimNBC.

Irene didn’t look pregnant, so I figured that the rumors were just that: rumors. And she was really amazing: passionate, enthusiastic, friendly, and so sure of herself. I really like her a lot. Her lover, Roland, had stepped outside to take a personal phone call, so I didn’t get a chance to meet him that afternoon.

I left the kids dancing and watching ice-skating at the B&B, and I returned home to whip up another batch of cookies for our household. I thought maybe we might even have some left-over for the parties we’ll be throwing soon.

But first Tani found them.

I love it when Tani enjoys a good snack, and I always sneak a few extra nuts and wheat germ into the cookies that she’ll be eating.

And then Emma found them.

“Something about eating warm cookies on a holiday makes me think of Mom and Dad. Wish they were here.”

I know that we all wanted to throw this Plum Day celebration to give something to the community of Sims, but I had no idea that it would make our household so happy.

We walk around smiling and hugging each other all day! 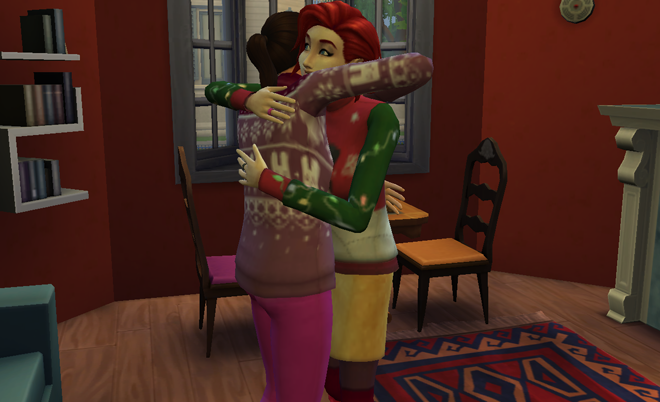 “Thank you for organizing this, Cath!”

“This was such a great idea!”

I’ve never seen Tanisha feel so happy. This celebration makes her feel like we’re family. I know she grew up with a mom and a dad and a brother in the big fancy mansion across from the Goths’, but it takes more than a fancy home to make a family. It takes celebrating together and sharing in feelings of love and support. That’s what Plum Day is all about.

Tani’s so happy she dances on the landing!

Since Forrest and I don’t have jobs, we’ve been coordinating most of the Plum Day activities. But I think all of us feel tired in a happy and good way from all the extra things that we’ve been doing. Rest up, Emma! Tomorrow, we take the Gnome Kickers on a nature walk!