Did you know that Frost wrote “The Road Not Taken” as a means of teasing his friend the poet Edward Thomas, who literally could not make up his mind which fork to take whenever the two went walking in the English countryside? Google “robert frost edward thomas the road not taken” and you’ll see what I mean.

An air of wistfulness enters into the final draft of the poem because Thomas, perhaps spurred by the joke at the heart of an earlier draft of it he’d read, went to fight in a war from which he never returned. “Way leads on to way,” and we don’t know if we will ever come back.

Any sentimentality in the poem originates entirely in the reader, for Frost was no sentimentalist.

He was a Modernist.

I’m not Modern. I’ve got a post-modern mind and a Romantic heart. I am sentimentality itself.

I wanted to spend some time alone with Elder, before his way led him away.

It’s Elder’s last Sunday in town, and I want to spend it with him at the park.

We met up at Magnolia Blossom Park.

Elder was like a blossom to all the teen bees. This must be a new friend of his from school.

But at last, we got a chance to talk just the two of us.

“I’m glad you could meet me here, Elder. So this is like one of my favorite places in the universe.”

Elder gets so excited when he talks about movies and tv shows–it made me feel excited, too, just listening to him.

‘”What about that time when he says, ‘I’ll fight it, but I won’t kill it. Now, what about my dynamite?'”

We got hungry, so I offered to grill up some lunch for us, and we jogged over to the picnic tables.

Freezer bunnies, I loved the way it felt to have him running behind me. I couldn’t tell if it was like he was following me or like he was trying to catch me, but either way was sweet.

At that moment, I felt thankful that I’m a good cook. He’s a foodie.

I grilled up some veggie burgers. He loved them, and even took some pics of them to post to his twitterSim feed. 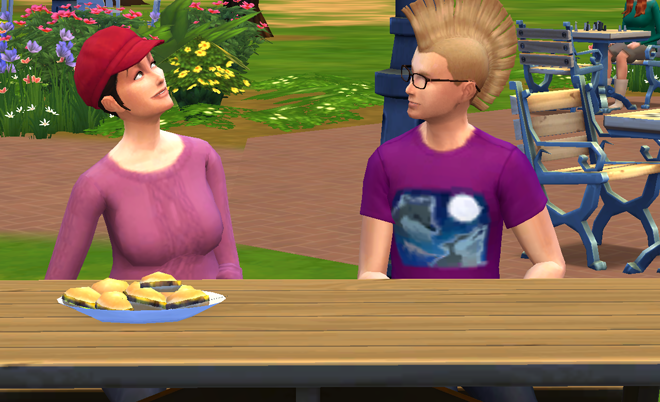 “Can I ask you something personal?” he asked. “And will you tell it to me straight?”

“I’ve been wanting to ask you this, but I needed the right moment.”

He asked me about woo-hoo.

“So, you know when two Sims feel really close to each other?”

“I haven’t had personal experience with it,” I told him. “The most I know about it is from reading. In fact, your family blog has shown me what it can be at its best. Your mom and dad–or better yet, your grandma and grandpa! Wow. There’s a story to make any space cowboy weak in the knees.” 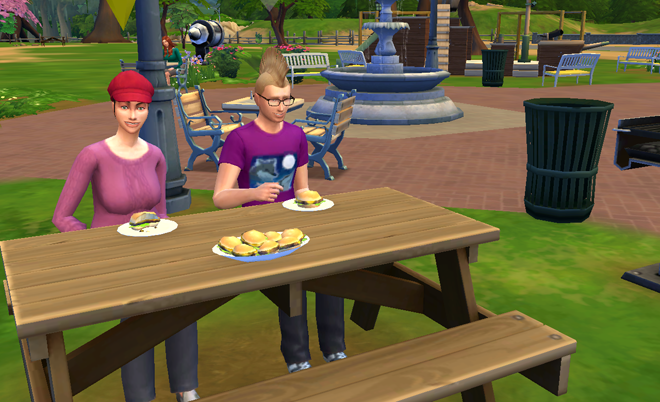 This is going ok, right? I’m not crossing any personal boundaries I shouldn’t be crossing, am I?

Neither of us felt embarrassed yet, so I kept talking, as honestly and straightforwardly as I had always hoped some young adult would have answered me, back when I was a teen asking this question to every open-minded Sim I met.

“You know, I’ve realized recently that it’s ok with me if I never experience woo-hoo. It’s the deep connection I’m after, not the mutual activation of each other’s pleasure coding, and I can have that connection with other Sims without woo-hoo.”

What I said instead was, “If I ever do, then it will be with someone that I love, someone I trust, someone with whom I can be so vulnerable that I can let that person see into my deepest coding.”

I didn’t hear what he said just then. There was this daydream that was trying to get my attention.

We switched gears and played chess. We didn’t even finish the game because, well, we got kinda caught up looking at each other. 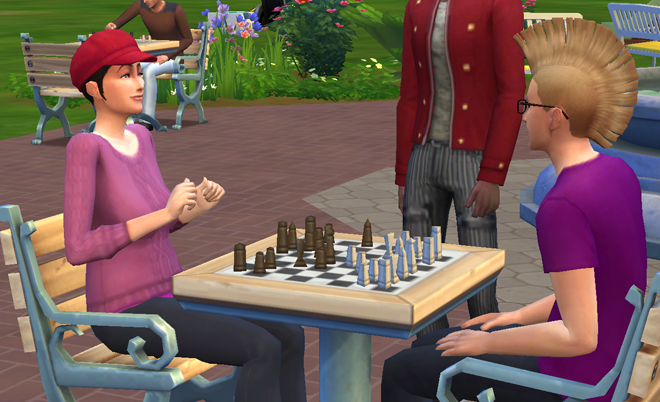 Oh! This day is just so perfect! I wish it would last forever!

“Ok, you remember the time when he says, ‘Son of a bitch! I’m sick of these dolphins!'” 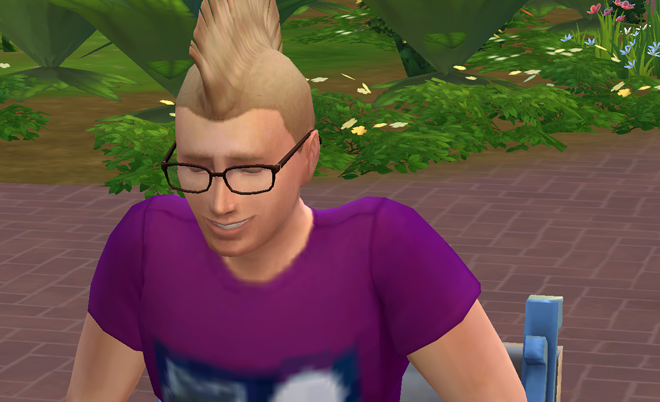 “Oh! Oh! Oh! And what about when the festival director says, ‘That’s an endangered species at most. What would be the scientific purpose of killing it?’ and Steve Zissou answers, ‘Revenge.'”

Soon it was time for him to head back to the B&B. I knew I’d see him there later that evening, for Gray and I were heading over there to meet the Alien family.

“Thanks for today, Elder.”

He kinda made this sigh when we hugged that sounded like, “Anphora.”

But still, after we hugged good-bye, I watched him walking down that fork in the path, and I thought about how way leads onto way. 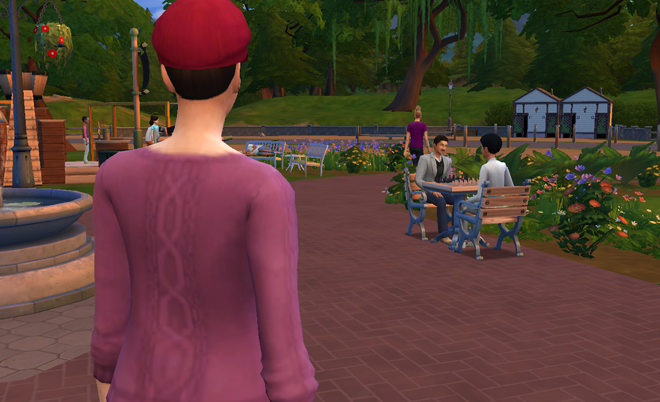