Aspen has a raging grin.

She’s got a reason.

It has been just over a month since I’d played Goofy Love, so I thought I’d start with a quiet planning session with Aspen, just so we could get everything in order before Linda’s elder birthday. I thought maybe we could talk about the whole heir-thing, and meeting a guy–or not meeting one–and what type of pace we might want to take as we move into the future of generation five.

Aspen had other ideas.

As soon as I opened the game, a mailman walked by, and there wasn’t even any mail to be delivered. 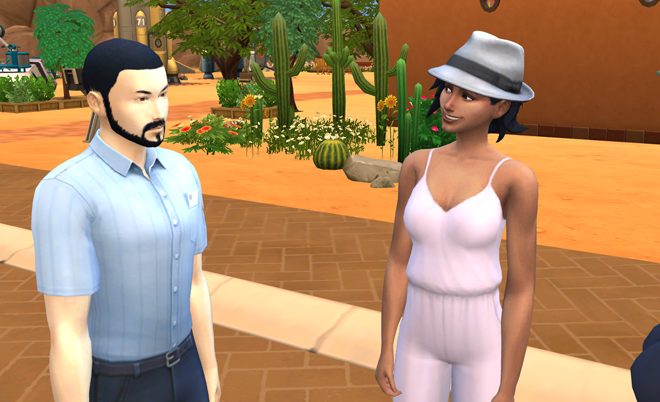 Now every reader of the Wolff Legacy knows that you don’t just let a mailman walk by, especially if there’s an heir or heir-potential looking for a mate. That legacy was built by a founder and a mailman, and the current gen five Wolff legacy heir and the mailman she married have officially been named “Best Couple Ever.”

Linda, tending garden, ran out to meet the mailman while Aspen woke up and got out of bed.

We learned his first trait early: he’s good! I do love a good Sim.

“He’s worth looking at.”

Aspen was studying him like a scholar studies ancient Greek. I hadn’t seen her show such interest in another Sim before.

He’s not like the other game-generated Townies. He’s got something going for him, even if it is just a mailman uniform.

Then, another mailman walked by in the opposite direction! Two mailmen! It was almost too sweet to believe!

“Am I seeing double in blue?”

We asked them both to hang out. The second one, Niko, started talking about robot invasions, so I knew he was a geek right away. We’ve got a long history of geeks in the family. Aspen’s a geek! 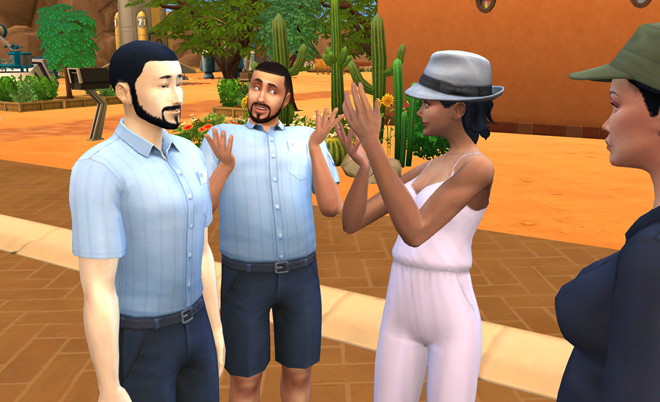 While we were talking cupcakes and robots with the mailmen, we got the pop-up to throw a rocking party to celebrate Linda’s birthday, so Aspen took a vacation day, we invited the mailmen, all the wiener-head boys, and Blue Skullhead, and Kourtney and Poppy. Kamden didn’t show up on the potential guest list. Guess we’ve lost Cousin Kam. (And now I remember why I haven’t been playing this family for a month. Deal with it. Move on. Party anyway, like the Reaper’s not knocking on the door.) 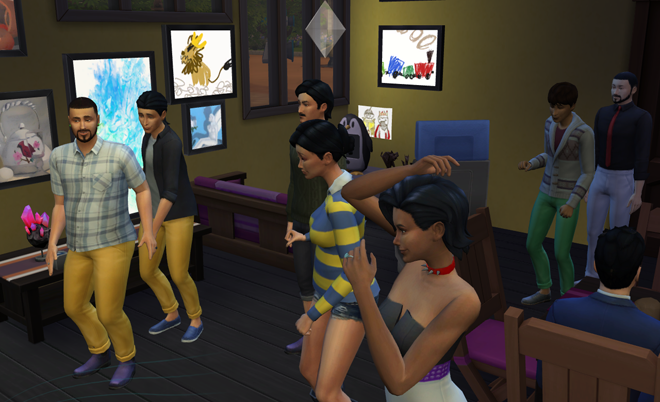 It was a pretty cool party. Aspen dressed like a rock star that still wears knee socks. With her high heels. It’s cool. It’s Aspen. She can wear what she wants and pull it off. Because. You know. Aspen.

The last birthday party she hosted, she wore her PJs. I wonder if teammailmen influenced her wardrobe choice.

She had eyes for Mailman #2. And what a smile. What a party. 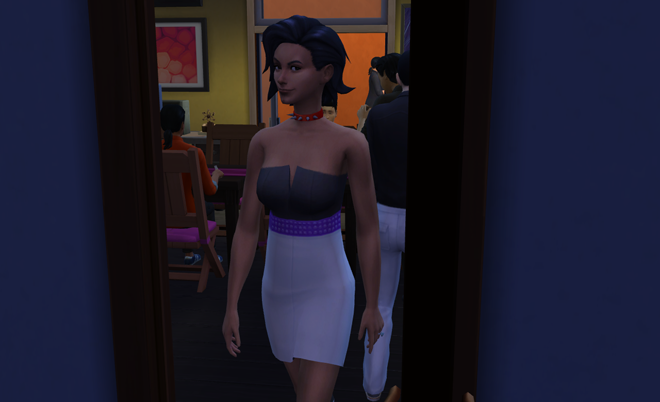 “Did a certain mailman out-of-uniform wander back here to the work-out room?”

They chatted while he worked out. Or rather, they stared at each other while he sat in his workout clothes on the weight machine. Time passed. Dancing stopped. 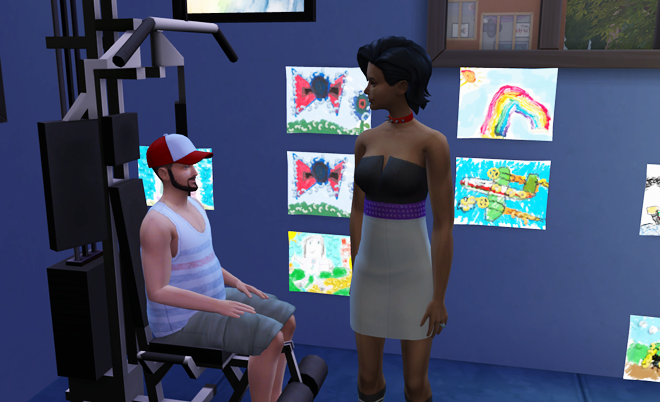 Linda blew out the cake, with only her best friend and sister-in-law Willow there to cheer.

“I hope my three girls will be as happy in love as I have been.”

You’re always a beautiful cupcake, Linda Noel, especially with the story of your life written on your heart-shaped face.

We asked Mailman #2 to hang around for a little while after the party. “Oh, sure. I can stay for a bit. Something tells me my route might be cancelled by the time morning rolls around.”

He’s pretty sweet. In addition to being a geek, he’s also a foodie, and childish. I like a childish Sim. “Have you really been living here all along? Why haven’t I seen you before today?”

It was 1:01 a.m. Thursday. Madrona, tanked up on coffee, thought she’d do a few rounds on the punching bag before hitting the sack, even though she was red-plumbob tired. Her new self-assured trait, combined with her new career in business, is really suiting her! We cancelled the workout and sent her to bed.

“Just a hundred punches, and I’ll be ready for bed. Need to be ready to face the management team tomorrow!”

Niko was using the gaming rig. (Did I mention he’s a geek?) When I realized what it meant that it was Thursday, I freaked out for a moment from all my stored-up culling fears, so I dashed into Manage Worlds and quickly moved him and Lamont, Mailman #1, into a house. Nothing like keeping #teammailmen together, right?