In my time stream, Willow Bough was born at 9:25 p.m. MST on October 20, 2014, and she became translucent at 9:45 p.m. MST on March 21, 2015. Five months is a long time for a legacy spare to spend with a Simmer. No wonder seeing her final transformation is nearly game-stopping for me.

“You’re just my little queen of the night, aren’t you?”

She grew up adored by her Aunt Manzanita, her dad, Palo Verde, and her mom, Cassandra. Cassandra always had this full-of-love smile on her face when Willow was around. She and Willow were different from each other in many ways–Willow has always been Willow. And Cassandra gave her the warm and loving space that Willow needed to grow and thrive into her own beautiful being.

“Hi, Poppy… Thanks for calling… Oh, I’m just sitting around with my mom.”

Willow’s childhood was centered in family. With her big brother I-dub there to cheer her on and do homework with her, her mom and dad filling their home with laughter and support, and her cousins across the street, childhood was a happy time.

In the evenings, the kids do homework while Mom and Dad catch up on the day.

When Willow became a teen, we saw for the first time her iconic Bough smile–a gift from her father. I think it was this smile–this smile and those eyes–that hooked me. Such intelligence in that face!

Ironwood and Willow were very different in appearance and temperament, yet they were close and supportive siblings throughout their lives. Willow respected everyone, and as a result, she was always treated with respect. She brought out the best in those around her, including her hot-head brother, who never once took out his anger on another Sim.

The siblings that study together…

Willow’s gloominess brought depth to her generally happy nature. It added insight to her humor, and it brought reverence to everything she did. They didn’t call her the Weeping Willow on stage for nothing.

Could this be my favorite Sim ever?

Willow remained single throughout her years, without a lover. I attribute this to the conversation she had with Grim, when she asked him about woo-hoo. Perhaps hearing about the little death from Death himself was just too much–and she chose a life of celibacy instead.

Her comedy had a cerebral quality. It wasn’t so much that it made you laugh. It was more that it made you think. And then later, perhaps, you might crack a smile. Or you might even find your mind opening up, and then, from way deep, a belly laugh might rumble out and fill the room. But once the reverberations of laughter faded, you’d feel something of the sanctity of life, and you might wonder what it was you were laughing at in the first place.

Willow was an amazing aunt. She and Aspen became BFFs when Aspen was a child and remained best friends for the rest of Willow’s life. When Aspen was very little, she wanted to be just like Willow when she grew up. Willow told her, “I’m the one who’s completely Willow. There’s no need for two of us to be. You’re the one who can be completely Aspen.” 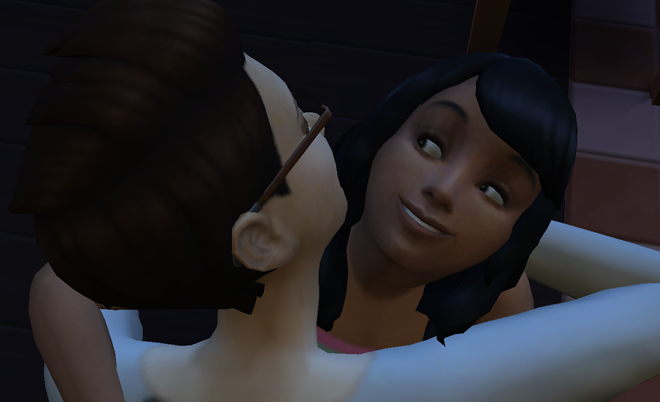 Aspen took her words to heart, and it is, perhaps, because of Willow’s awesome Willowness that Aspen has achieved her awesome Aspenness.

In unison: “Ah! The blue sky! The fresh air! The flying… what is that?”

Willow, her sister-in-law, Linda, and Aspen were all three gloomy. Occasionally, they would send each other into a tail-spin with their gloomy conversations, but as long as they kept the topics between them light, they got along beautifully. 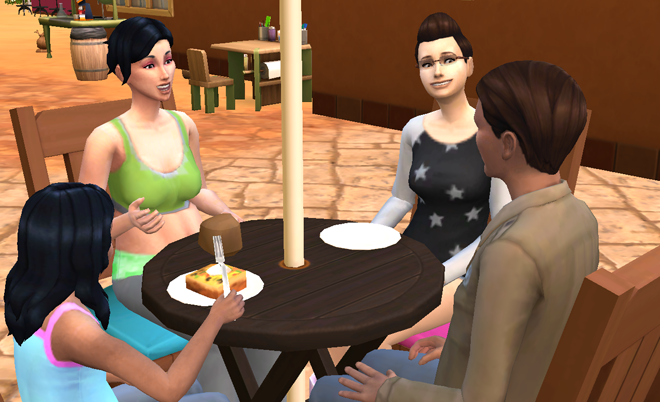 “We get along best when we keep things light.”

Willow drew depth and strength from her gloominess. Mourning those who passed before was a daily activity for her. I never cancelled it from her queue, for she seemed to find solace in remembering her parents, grandparents, and great grandparents. Some of her more profound comedy routines found their genesis in quiet moments by the fountain in the family cemetery.

The Weeping Willow finds comedic potential in the most serious of matters.

Even from beyond the grave, Willow’s comedian father, the famous Royal Llama Tamer, mentored and supported Willow’s professional career. She and Aspen spent many late nights during Aspen’s Zzz-juice and skilling years, joking with Palo Verde’s ghost and sometimes, even with the ghost of Grandfather Kyler.

Palo Verde’s jokes could knock a ghost plum out of his chair!

Willow exemplified oneness to me.

So whole. So complete. In and of herself.

To me, she represents Venus in Virgo. Since I share that astrological placement, I feel a deep resonance when I see her personal integrity–there’s a ripeness, and yet it’s contained. A generosity of spirit and warmth, yet she will not give away that which is most dear to herself. She will love everyone she pleases, and no one will own her.

Perhaps of all her qualities, this is the one that most speaks to me.

In my life, I’ve noticed that sometimes we are drawn to love when the one we love shows us aspects of ourselves that we want to be able to call on and express. Sometimes, these are aspects that confuse us or are buried deep within us. Or aspects that we want to develop further. When we see those qualities in another, sometimes we fall in love. Slowly, through holding that love in our hands, turning it towards light and shadow, feeling its weight, examining it from all sides, we can see those qualities more clearly. We can feel where they are within us.

At that point, we can release our beloved from holding the symbol of that quality in him or herself. The quality has become ours. And now, we can see our beloved as who he or she is without the weight of symbol. Simply as being.

That is the process I went through with Willow. And I love her the more for it.

When the symbol dropped away, she was able to see me, too, clearly through the screen, face-to-face with the recognition that we are. 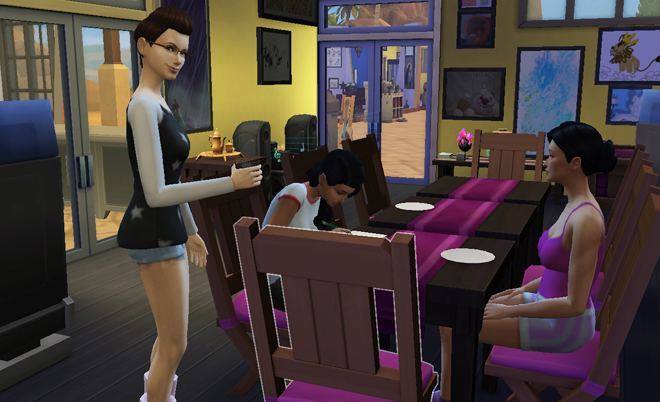 Love, once symbolic, becomes deeper when the burden of symbol drops away and it is simply the rawness of one to one. 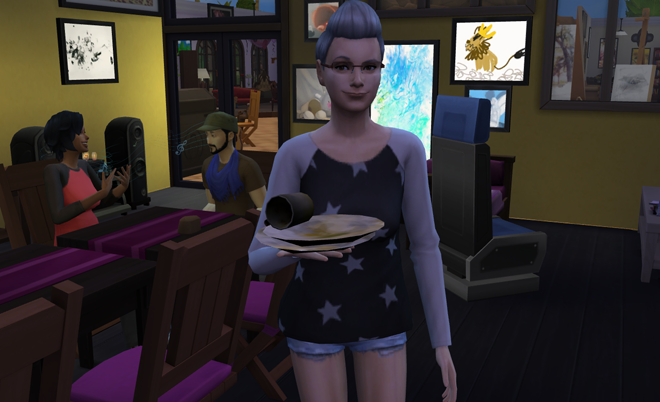 “Oh, my. Looks like the circle of life all over again.”

After her father died, Willow faced life with a quiet inward smile, as if she were remembering his jokes, his kindness, and his one-of-a-kind ways. I know that’s how she would want us to respond to her transformation, too–remembering her Willowness with a smile. That’s what I’m going to try to do, calling upon those qualities that I recognize within myself when I look at Willow and feel love, and remembering, too, Willow’s own inherent being, completely independent from symbol and form.

“This is how Dad wanted us to remember him, by smiling on the inside at the jokes he told.”

I’ll end this retrospective with one of Willow’s comedy routines. It’s called “Binary.”

This zero walked into a bar where he saw a lovely one sitting in a sun hat.

“Think maybe we could get together and create a lot of little zeroes and ones?” he asked her. “This could be the start of something big!”

“Are you trying to get my number?” she replied.

Yeah. I don’t get it either.