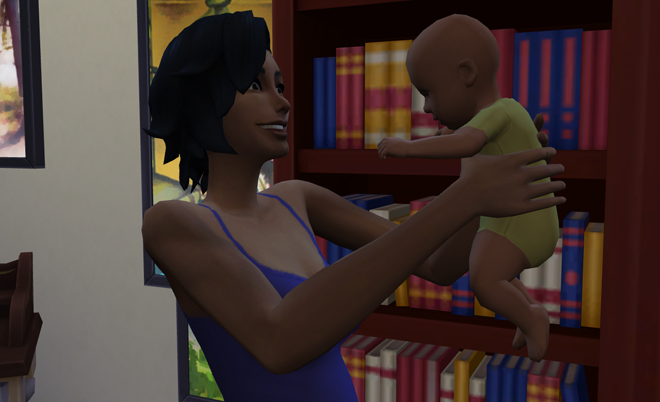 This screenshot is for RachelRosebud and all you fans of Yoga with Adriene: “I’m SO holding Simba right now! The Circle of Life!”

With the birth of a baby, life takes on a new focus. Our joy funnels to Salix, this newest Bough daughter–gen 6, baby!–and we create time for nurturing, expressing love, and settling into the rhythms of caring for a newborn.

Pregnancy was uncomfortable for Aspen. “It’s just morning sickness,” she said, and her discomfort never once detracted from her happiness.

“I may look like I swallowed the soccer ball, but I  scored the winning goal!”

She waited until the third trimester to take family leave, since she wanted to help her sports team finish the season. She kept active, swimming and running on the treadmill. Linda mentored her, though she doesn’t need pushing, or even tips on technique. It was the moral support which she appreciated.

She felt the flow of life–within her, and without. Though she didn’t make a big deal out of it, she felt saturated with love. Sitting alone at the computer one evening, her thought bubble contained a big bright pink heart–the hearts that appears when adults “Express love” to child Sims.

My heart was touched to see her, sitting alone, expressing this love to the waiting baby inside her.

Life within, life without.

Aspen amazes me. She went to the S-GAS Transformation sessions, more to meet Jamie Rose and support me than to participate. I wanted a friendly face to glance at when my stranger-danger kicked in while befriending all these new Sims on my hard-drive.

Aspen watched and listened, soaking up all the perspectives and experiences of the Sims around her. 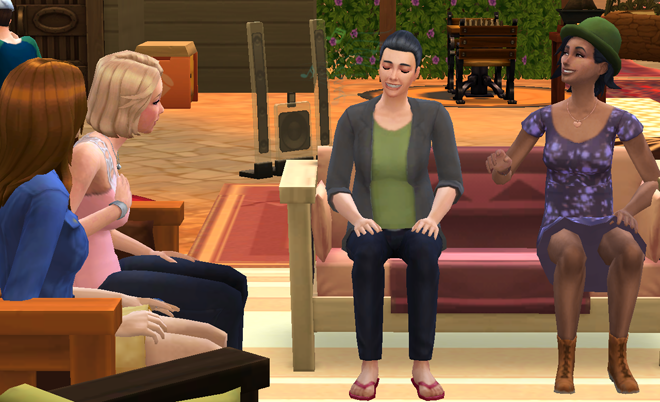 “I just realized! All three of you are SimSelves of legacy players! So, Sarafina Raisin Plumsin, is it true when they say that mailmen really know how to deliver?”

She was a tremendous support to me–and when we got back to her game, she did indeed seem transformed! Perhaps meeting all those other Sims–some of whom were spares from fourth and fifth generation legacies–helped her to value her role and responsibilities as the fifth-generation heir.

For since we’ve been back, she’s had the sole focus of discovering how to joyfully live within the constraints that a legacy imposes. From choosing the right spouse to witnessing the passing of generations and welcoming the new–her life has now found its purpose within the structure of the legacy game.

I have a theory that our imagination and feelings influence the game–that the energy that composes our imagination–all those sparks that fire the synapses–and all the energy of feeling, in whatever form it takes–that this energy of thought and feeling enters our game, influencing the behavior of our Sims. I know that this is a crazy scheme–and it’s one that’s shared by one of the most insightful Sims, young Rose Fletcher.

And for support of my observation that one instance of a Sim informs all instances of that same game-aware Sim, all you need to do is listen to Cassandra Goth Bilmonaghan.

At any rate, Aspen, who before S-GAS seemed unsure of the suitability of the life of a legacy heir, is now self-directed, responsible, and joyful within that role.

She’s been lending emotional support to her family, still upset over the reaping of Cousin Kourtney.

“Meeting Grim is a part of every life, Nik.”

Niko’s been thinking about Aspen’s words of consolation, and when he dances with the happy-green ghost of Willow, his sorrowful heart eases some.

“Maybe Aspen’s right and their spirits really do dance the ground they loved!”

We have–in the recent spirit of saying good-bye to all Sims Four–received Linda’s final warning. This feels like a bum deal to me, since Linda had the Long-Life reward. I expected her to be around throughout her grandkids’ childhood.

And Madrona is following her sister’s example. She rolled the whim to marry Mailman No. 1.

“I like the way you’re looking at me right now.”

She followed Lamont out to the family cemetery–so many gravestones now!–where, as a Good Sim, he was drawn to mourn the long line of family and friends buried there. And she proposed. 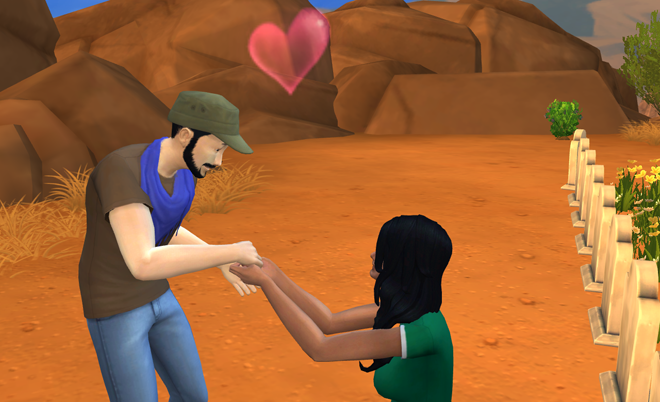 Remember this moment, too.

Lamont, like Laurie in “Little Women,” may not have married his good friend and the sister he’d first chosen–but he found in the younger sister a woman who loved him. And, one way or another, he became a member of the family.

Which brings us to Daughter Number Three.

She’s been enjoying many whims related to her new Creative talent, and since this provides a break from being mean, I’m happily assisting her in fulfilling those. I’m thinking that maybe finding a creative outlet for expressing herself will help reduce her meanness and hot headedness. “I can’t believe I painted the plumming Social Bunny for my first painting EVER!”

She was a little–ok, very–angry when she realized she’d painted the Social Bunny as her very first painting. I think she is perhaps worried about what the art critics will say once she becomes a famous painter. When Blue Skullhead came over to visit, he was very flirty. Poplar likes him as a friend. But she thinks of him as old. I try to reassure her that we have plenty of youth potion and that age differences aren’t a big deal at all. But she’s not sure about those wrinkles as the corners of his eyes. Kinda makes him look like he’s smiling, even when he’s not. 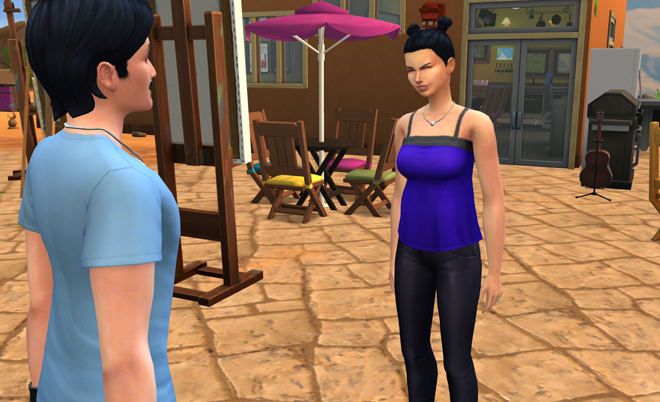 “I dunno. Maybe he’ll look younger if I squint.”

When a third mailman walked down the street the next day, Poplar thought maybe she’d toss her hat in with her sisters’. 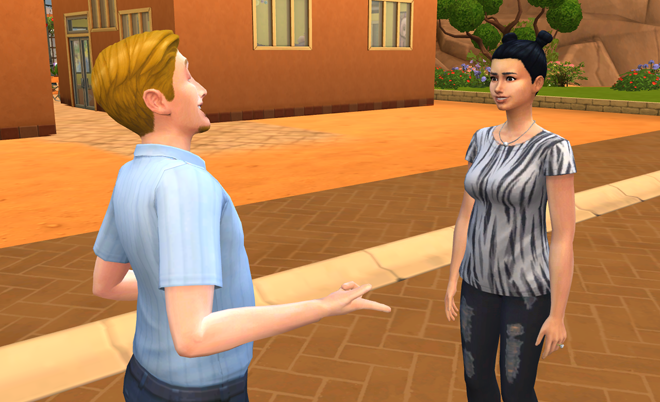 “I dunno. What HAVE you heard about mailmen?”

They became friends–good friends, even–within their first conversation right there on the street! This is saying a lot for a young woman who has, maybe, one other friend who’s not a family member. 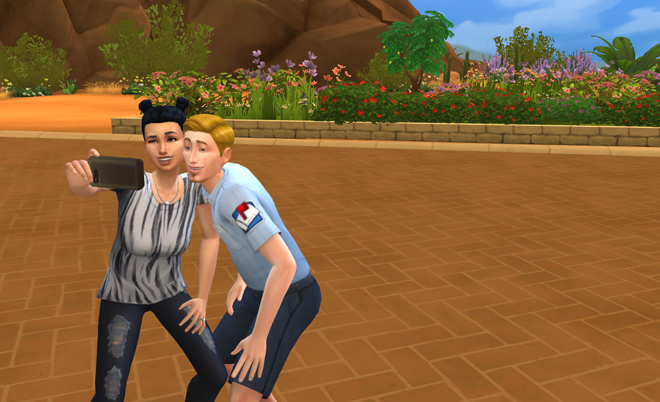 Later that evening, he came over flirty, too. 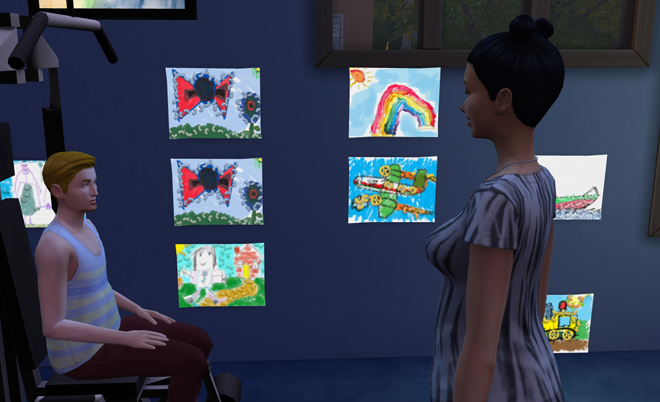 I think she likes him? She’s not scowling or squinting, at least.

And by the time all of this courtship had taken place, it was time for a home delivery! I was going to write that this home delivery didn’t involve a mailman, but since Niko is the father, I guess that’s not true! 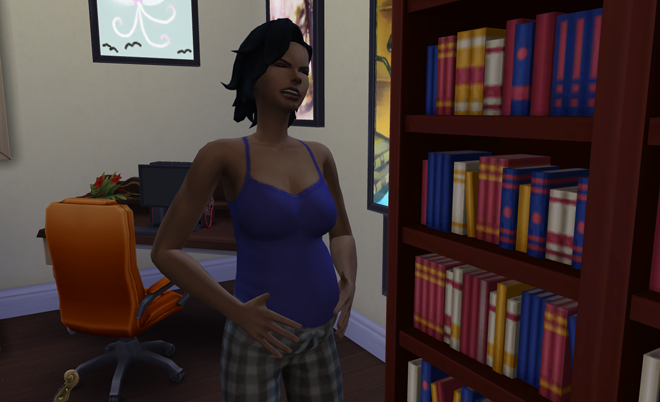 “I’m a professional athlete. I KNOW how to breathe through pain. And this is killer!”

Aspen was up for the task. She is tough. She’s not about to let a little thing like pain interfere with a big thing like life.

It was harder for Niko to watch.

“Oh! It looks like it hurts! Hang in there, baby!” “Yeah. That’s my girl. She’s got this covered.”

And all those days of nausea, all that pain during labor–and all that love in the conception and gestation of this little nooboo–look what it brought into the digital world: a new baby girl named Salix Bough.

This is why Aspen dedicated her life to being a legacy mom with such a single point of focus.