This day is the culmination of a dream.

Lamont Alley had been hoping to become a member of the Bough family for a while. He knew that with his traits of Good, Family-Oriented, and Romantic, he would make a supportive father and a loving husband. He hadn’t been sure how many trips along this hill-top route it would take before one of the Bough girls came out to meet him, and when Aspen and her mother finally greeted him one morning, he had to clench his jaws to keep from smiling, or he was sure he would turn giddy. 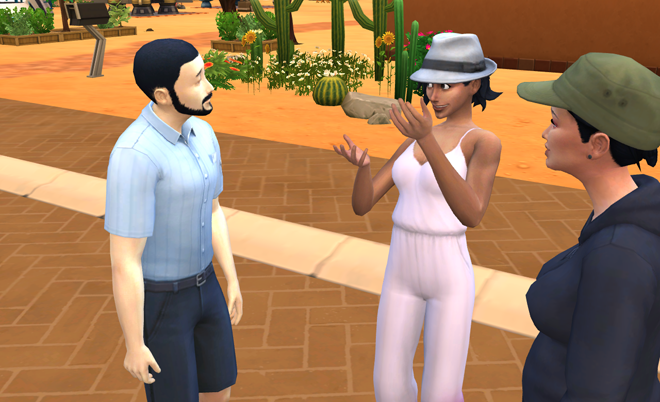 “Super happy to meet you!”

Aspen’s smiles felt encouraging–and he had great faith in his own ability to attract women. Usually, all it took was one lazy lean and a toss of his head. He knew my steadfast belief, founded on the love stories from one of the greatest TS4 legacy families, that mailmen make the best husbands, so he felt he could count on Aspen’s player to provide a few nudges, and a few nudges should be all it would take.

When Niko, the other mailman arrived, Lamont wasn’t worried. Look at the belly on that guy! Those wide hips. And an opening conversation about a robot invasion? Get real.

Which one is she smiling for?

But then he noticed Aspen’s spark. She didn’t light up like that when she looked at him.

Rome wasn’t built in a day.

They had a birthday party. Aspen made her choice. 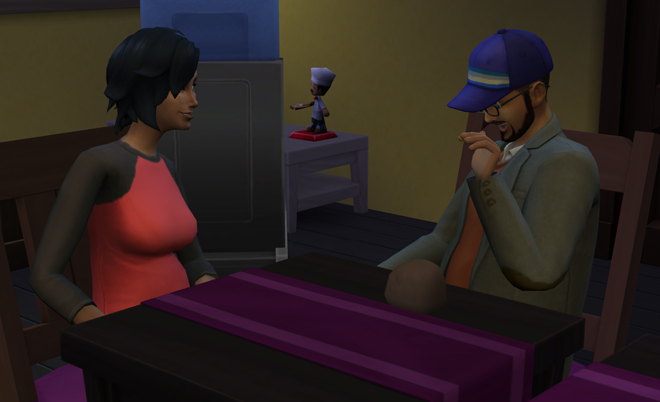 And, it looks like she chooses the other mailman.

There were two more sisters as yet unchosen.There were a few flirts, and a fumble. There was a wedding, and the softening of a heart. The death of a beloved aunt, and tenderness all around.

There was a kiss.

Now, Lamont was the fiance. He wasn’t the heir’s fiance, but he was the fiance of a beautiful, soft, mischievous, smoldering woman with depths that called to him like a flugelhorn in the forest.

He and Niko still harbored the hatred of rivals. It wouldn’t last. After the wedding, and some therapy that I would provide, Lamont knew that their red relationship bar would slowly grow clear and sprout green.

He knew they would all live here for a while, where we could work on aspirations, raise cousins, spend time as an extended family, and when the pressures of too many Boughs weighed down Cradle Rock, he knew that there was a great aunt’s mansion across the street, waiting for just the right spares to fill its haunted hallways with the laughter of children.

This was his purpose: to nurture and tend the scions of this family which grew in the quiet center of Oasis Springs.

And now, the moment has come.

All this went through Lamont’s mind while he waited for his bride to join him under the alter.

She wore white–he knew she would. No animal hats, no sassy purple shirts and tight shorts, no frilly skirts or knee socks. Just the smooth classiness of satin and a line of tiny buttons down the back.

And the way she looked at him.

Before the ceremony, he’d swept her into his arms, and it was almost enough to keep him from noticing Aspen, coming out in her slip of sunlight to greet the wedding guests. 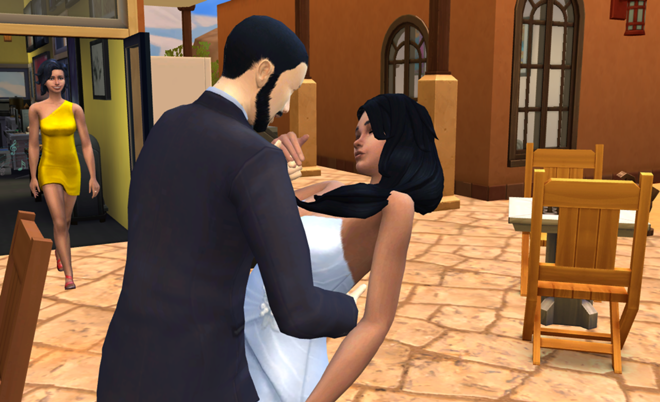 In the morning sun, while he and his bride waited beneath the alter, the family and friends came to witness their ceremony. Poplar, his bride’s sister and best friend, applauded their joy. Aspen shared a glance with her husband, the mailman who was her choice and with whom she was growing a family. 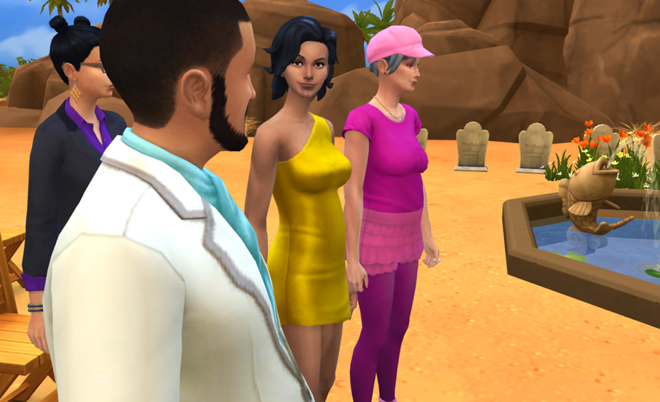 I think they’re remembering when they stood under the alter.

Linda Noel had her own memories. She wore the same outfit she’d worn on her wedding day, all those decades before, when she’d been pregnant with Aspen, standing beside her and now a mother herself. It had been so long since I-dub had called her Cupcake. She felt, within her own tingling life bar, that she would be joining him soon, and she wished that her Long Lifespan trait would not prolong these sparkling days too long. She was ready to leave, if she was honest with herself. 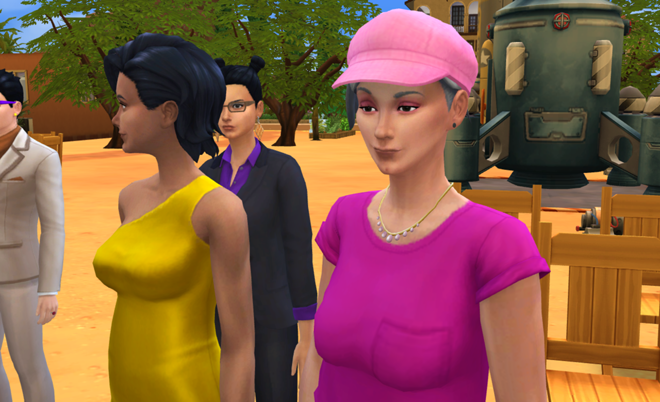 “It was a lifetime ago that I joined this family.”

Poplar had her own thoughts about her life. She was on a mailman’s route now. Was it what she wanted?

“I wonder if I’m too mean to make a good wife. Maybe, I should either choose a mean husband or stay single.”

Brody, the mailman who’s been coming around for Poplar, sent his own wish up to the heavens. Be careful what you wish for, Mailman No. 3! And behind him, one of the wiener head boys thought he might have just the right amount of meanness in his own stony heart to be able to successfully spar with Poplar.

Blue Skullhead showed up an elder, dressed in dashing Mortimer-Goth fashion. He seems satisfied with his status as the bachelor friend of the family. “The kids can call me Uncle Blue.” “Wait! I’m not sure if this will be legacy-compliant! I’m not in my animal hat!”

For Lamont, the one kiss under the alter brought everything into a rushing completion of the goal he’d set for himself when he was generated by this game. 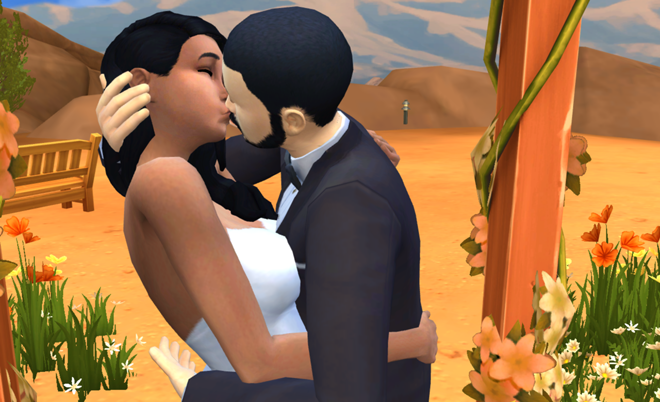 This moment is it.

Family, friends, and the men who wished they might stand under that alter with the last single Bough took a moment to respect the passing from one stage of life to the next.

Niko feels grateful that he stood there first, with golden Aspen.

After the wedding, the family and guests took time with each other.

Though the conversation remained light, Linda conveyed to Aspen the trust of continuing the legacy. Aspen knows Linda won’t be with them for long.

Linda’s shared all she knows about living, being a mother, and being a wife with Aspen, and Aspen, in her own true-to-herself spin, has made this her own.

When the cake was cut, Niko, who’d been enjoying his sweet and spicy, broke out into the birthday song.

Madrona and Lamont shared a slice of cake under the alter. Lamont felt like he could spend the entire day there, at that one magical spot that had brought his dream to fruition. “This is my new favorite spot!”

They had the dance floor to themselves.

During the ceremony, baby Salix, who’s already got the Bough grin, delighted in the happy feelings that babies know best. 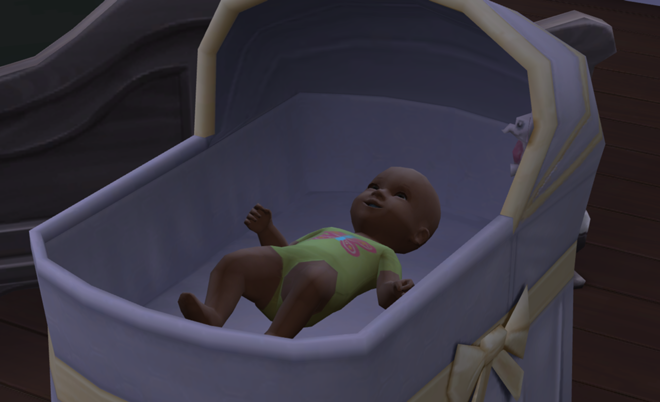 Aspen and her mom, who’d been up since before dawn, took naps while the guests ate cake and chicken stir-fry. 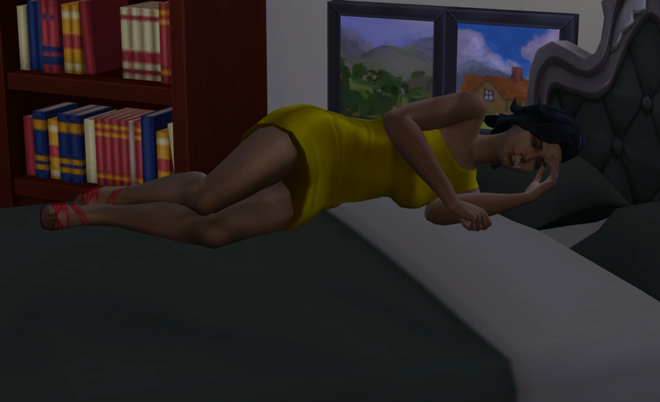 Rest well, Aspen! You deserve it!

Sleep well, Linda. We’re glad you were here to watch your daughter get married.

Madrona escaped for a while to enjoy her favorite hobby. And it felt great, too, just to be ‘Rona, and not the bride.

“This molecular structure is endlessly fascinating!”

Brody, Mailman No. 3, found Poplar on the dance floor. All it took was a glance at her to put Brody in a flirty mood.

“She’s got the greatest moves!”

Poplar, while enjoying Brody’s flirty energy, kept thinking about those crazy purple star glasses. Maybe a mean Sim would be a better match for her, and she intended to find out before things went much further with Brody.

“You look pretty cute over there, Starboy!”

While she finds him cute, it doesn’t seem that they’ll be able to sustain a relationship. Every conversation ends in a yelling match!

Linda, alone in the workout room where she and I-dub had shared their first date and spent countless hours working out together, felt the stillness and emptiness of the room.

The brothers-in-law did their best to bury the hatchet of rivalry. It will take time. At present, their jokes don’t line up, sparking more red. Stay to the safe topics for a while, boys, until you see yourselves as #teammailmen, and not mailmen opponents. They don’t trust each other yet.

Evening came on. The guests left. Madrona’s mailman headed to the edge of the lot where the long line of tombstones lay. He walked up and down, reading each inscription, until he found the one he was looking for. “Mesquite loved you, Anya,” it said.

He took a moment to honor the memory of the first NPC service Sim to marry into the family–Anya, an NPC maid, who married Mesquite Bough, the first spare.

Such a long row of graves.

This mailman, generated by the game to deliver packages and letters, has set for himself a new course, one determined not by the game, but by his own dedication to legacies. If he cannot be the husband of the heir, then he will be the best spouse of the spare that he can be, fulfilling this tradition passed down through the generations, offering happiness and love to this Sim who is now a side branch, rather than the central trunk. There is merit in supporting the off-shoot, as well.