This chapter is dedicated to the memory of Carewren123’s grandma, also named Linda, whose “favorite thing to in the whole world was spending time with her grand-babies and tending her garden. She was just able to meet her newest great grandchild right before Easter” (words in quotations courtesy of Carewren123). We love our Sims because through them all the gifts of our lives become clear to us. Love is never lost–it’s an energy that becomes a part of who we are.

Linda, going on three weeks now with a sparkling life bar, knows she won’t be around to witness all the changes that will happen in her family. So she has decided that, rather than looking forward to the next change and hoping that she lives to see it, she will instead celebrate this time between the changes. That’s right–three! Madrona stopped by to announce that she had given birth to twins! 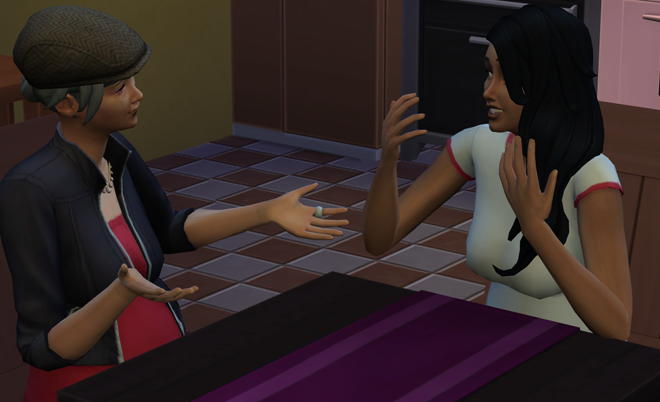 “The first twins of the family! Can you believe it?”

Linda headed across the street to meet her grandsons.

Little Irving Bough was being tended by a ghost, a friend of Mesquite. The baby seemed delighted with his ghostly caretaker. 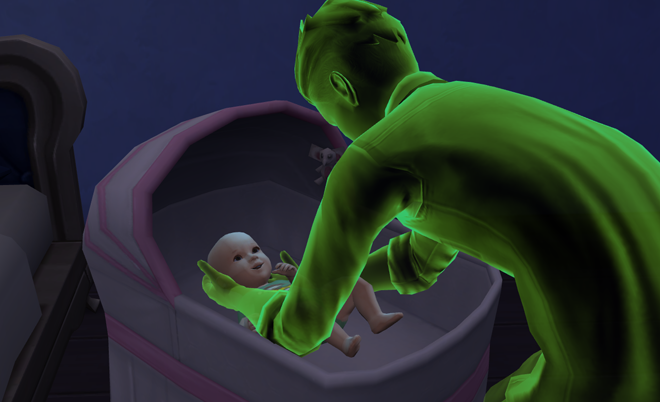 Who is this ghost, and where did he come from? And what’s he doing here?

Little Daryl looks like he inherited the famous Bough grin. So cute! He looks a little like the Royal Llama Tamer, to me!

Mesquite, who still lives in the Mansion of the Spares, also helps with the baby care.

Most of our other ghosts–if not all of them–seem to have been culled, so I consider it a gift from the game gods to have Mesquite–my gen 2 Mesquite!–living here in this house. I will never know how he came to move in–did he do so all of his own accord?

Linda relaxed into the sensation of holding a baby: the warmth, the settled weight, the gaze that reaches so deeply into you.

To think: she is able to hold each! These children of her beautiful middle daughter. Look at that cute little nose.

She had almost forgotten what it felt like to hold a baby nestled against her, with her palm supporting the head.

A stream of memories flowed through her. She felt again the softness of her own three daughters which was a sensation that she had never quite released, but which seemed to be stored so deeply within every cell. Would these boys look like I-dub, she wondered? Oh, that baby smell. 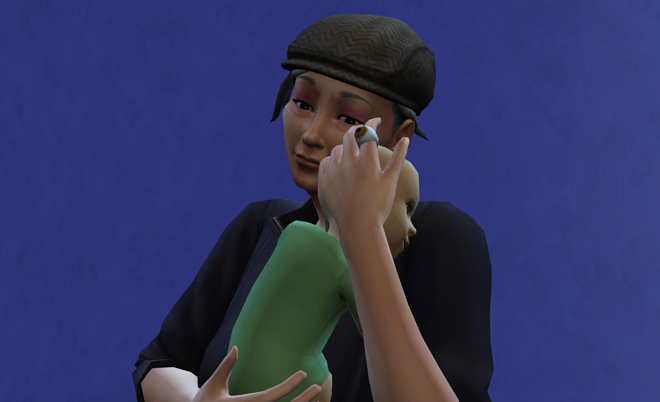 A feeling she will never forget

In the moments before the next change, it is possible to feel such deep gratitude. She had lived to hold these two grand-babies!

She had been part of Salix’s childhood, the first grandparent in the family who had lived long enough to be there during a grandchild’s childhood.

Salix, who had completed Artistic Prodigy and Rambunctious Scamp, was now busily working on Whiz Kid. She’d reached a bit of a stalemate, as it was the weekend and, in order to move to the next level of her aspiration, she still needed to complete one more set of homework, which wouldn’t be available until after school on Monday. But in the meantime, she was maxing out the mental skill–just to be ready!

Once she accomplished that goal, we let her be a kid for a bit. She slept at night, and spent Sunday afternoon playing the piano. She’s such a good kid–she’ll just become engrossed in whatever skill-building project she’s playing with at the moment.

Linda hasn’t been thinking about whether she’ll see Salix become a teen. She’s just glad that she’s been there for this long stretch of childhood. 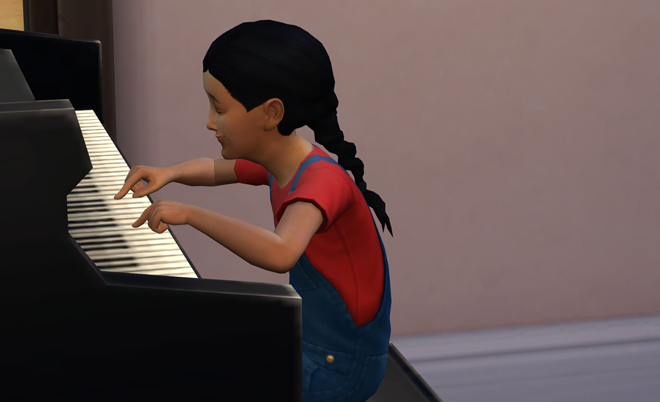 Linda also wasn’t concerned about whether she’d live long enough to see Poplar get married. When it came to love interests, it wasn’t that Poplar didn’t have a choice: she had plenty of options.

On a typical Sunday, any one of the now adult wiener-head boys, Brody the ex-mailman, and Minsk, Poplar’s childhood friend, might all stop by. 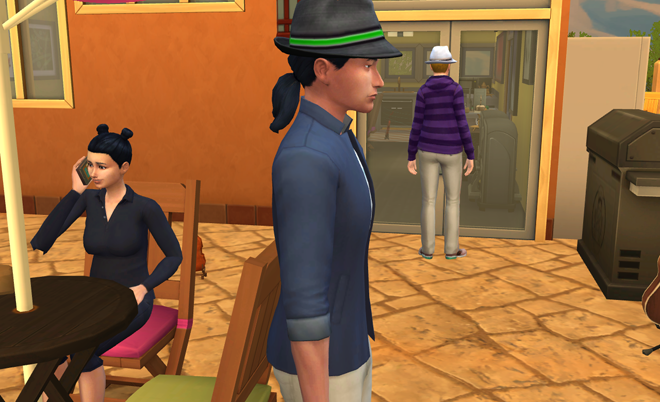 “Sure, come hang out, Minsk! It’s not like we don’t already have all the guys in town over.”

There’s just something about Poplar. It’s not like she’s the most beautiful Sim–though she is beautiful, cute, and interesting looking. It’s not that she’s kind and empathetic–she’s not. She’s mean. It’s something else. I think it’s this intelligence in her eyes that gets me, that little halfway smile and that laugh that looks like it’s about to burst out from her. What is she thinking?

Linda, her two sisters, her niece, and her brother-in-law all adore her–even though their friendship bars are daily pruned back to half-full through Poplar’s careful servings of wanton acts of meanness.

She’s her own person, I’ll say that for her. And she seems to have her life all figured out.

“I’m planning on being the best tech guy the company ever hired. And the best programmer, too. And a master painter.”

Linda is hoping that she’ll still be around in a few days to meet her next grandchild. Aspen and Niko had expected to have had their second child already, but this time, it took a few tries.

That made it all the more exciting when Aspen ran in–autonomously, I might add–to share the big news with Niko. “Nik–are you ready for the best news ever?”

Niko’s hoping for a son. Or two. He wouldn’t mind if the twin cousins across the street had twin boys to play with over here.

“Doesn’t matter if it took three tries. It took. That’s what matters!”

And everyday, whether it’s a day of changes or a day of the same, the garden needs to be tended.

It’s been Linda’s job since she moved in. She knows each of these plants so well. And they know her, she feels.

“Tending a family is like tending a garden, I guess.”

She doesn’t feel old, though she’s lived longer than any Sim in any of my games. She feels the same as she did when she first moved onto this lot, only more. She’s got layer upon layer of memories now.

Maybe that’s what makes this time between changes so sweet: when we’re in a period before the next big change, we haven’t yet made the next big memory, so we can focus on all the little memories that we’re making. And we can enjoy, too, all these memories we’ve got stored up of all the other times when life was just so.