“Hey! So glad you could drop by at the last minute!”

“Hey, Eugene! ” Salix said. “Friday evening and no plans–that makes two of us!”

Salix invited Eugene over to hang out on Friday night. Though he’s not Minsk, I like him. He’s active like Salix, and none of his other traits are deal-breakers.

“So, tell me more about yourself. What’s your career?”

Salix was impressed. It’s not every day you meet somebody who’s got his own set of handcuffs.

“So I guess you’re sort of the keeper of law and order, huh?” she said. 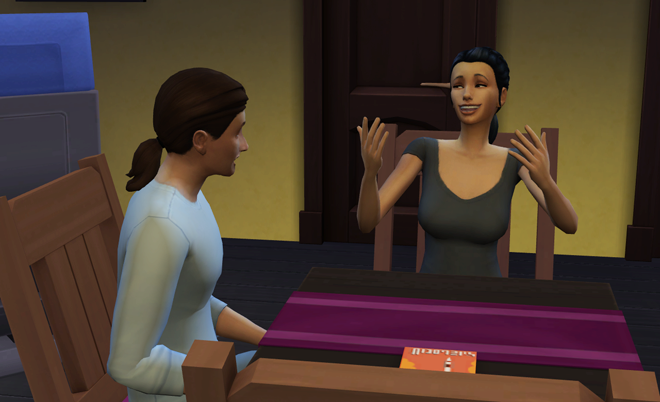 “Like, if I broke the law, you could arrest me!”

They chatted a bit. Then Salix got the urge to work out, Eugene got the urge to use the microscope up on the science rooftop. And before we knew it, the evening was over, it was time for Eugene to take off, and nobody had flirted with anyone.

The next day, Sal and Shug celebrated Shug’s decision to become a serious bodybuilder by heading over to the gym. With an active Sim and a bro bodybuilder, I’ve got a feeling we’re going to be spending a lot of time jogging, running on the treadmill, and lifting weights.

As soon as Salix entered the kick-boxing room, this guy became flirty. Salix has that effect on men, thanks to her romantic trait.

“Yeah. I have been working out for a while. How did you guess? Is it obvious?”

Salix needed around seven more friends for her Friend of the World aspiration. She just got the Incredibly Friendly reward trait, so now, after a cheerful introduction, she’s friends with the person she just met.

Grim stopped by, and he became Sal’s fourteenth friend.

“Just here to see if I can bulk up a little.”

Sugar’s best friend Miracle met them there, and while she and Shug joked and shared secrets in the punching bag room, Salix went to work making more friends. Soon, she stood in a circle, with her friend total now at 18.

Another Grim entered, and my game got a little glitchy. None of the Sims’ icons showed up in Salix’s queue of social interactions, just empty outlines where their icons belonged. I guess with two Grims on the lot, you don’t really want to advertise your identity: “Chat with blank.”

Amazing how quickly a circle of men forms around Salix.

While they were talking, one of these men felt a little brave, in addition to feeling a little flirty, and he blew a kiss to Salix. She was eyeing the red-head, instead of the guy blowing the kiss.

“Dude,” says the guy in orange cap, “there’s this thing called privacy. Heard of it?”

“Whee?” said Salix. “So, here we are. In a gym. What are we doing standing around? Shouldn’t we be working out?”

“Yay? Aren’t you excited? Ready to work out?”

What do you think, Salix? Lots of single guys here–are you interested in anyone?

She wasn’t sure. They were all kind of cute. Seems like facial hair is really in right now.

“I like that he was brave enough and goofy enough to flirt with all these guys standing around.”

When they were done at the gym, Miracle went home with them, and Madrona, who’s become an elder, dropped by. I felt happy seeing Sugar Maple sitting with her aunt and her best friend. When women at three different life stages gather in a corner of a kitchen, swapping jokes and telling stories,this ancient fabric of continuity gets a few more rows of stitches.

This brings up happy memories of doing homework while my mom chatted with neighbors who dropped by.

“So, I’m trying to decide what job I should get when I graduate,” he said. “Any suggestions?”

Poplar can only take so much conversation, and then she’s got to do something creative or geeky–by herself. Some project that is hers. This evening, she chose to paint while Aspen and Niko enjoyed catching up with their nephew.

After Irving left, Niko and Aspen grabbed a late-night snack.

“I’m a little worried about Salix,” Niko said. “I met that guy she liked. He’s got some bad habits. I’m afraid he won’t treat her well.”

“We had a talk,” Aspen said. “I’m not sure, but I don’t think she’s gonna be pursuing anything with him.”

“You think she’ll meet somebody else?”

“Are you worried, Nik, that she won’t find anyone that deserves her?”

“Nah. Well, yeah,” he said. He’s a dad. He knows there’s nobody that deserves his daughters.

“I just want her to find somebody that will cherish her, you know?”

Aspen knew what Niko meant. She knew, too, that there were all sorts of wonderful men out there, and that, with time and discernment, and a little luck and trust, her daughters would find somebody wonderful.

After all, she had. 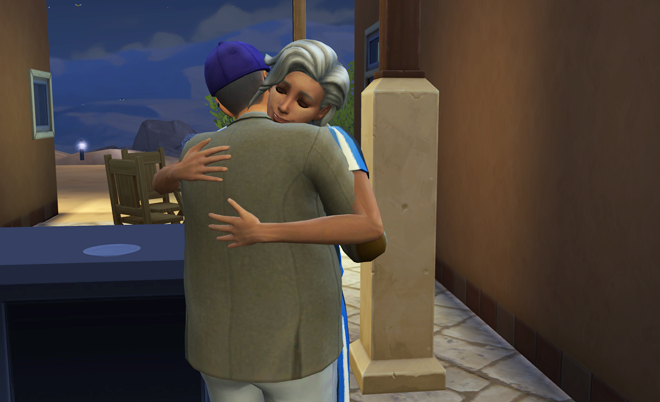 When Salix was out for a walk the next morning, she met a cute red-head, a male maid who seemed friendly and nice. While they were talking, one of the guys she’d met at the gym yesterday walked by. She rolled the whim to flirt with him. Before she got the chance to, he started yelling at the maid.

“What kind of job is cleaning houses for a guy? Are you a sissy?”

Sexist and mean–we can do better than that, Salix!

“Now, just one second. Gender does not determine profession! Any job done well is an honorable job–for anybody!”

Salix wanted a job herself. I thought that a career as a musician might be enjoyable for her, for she loves to play the piano, but when she went to call the employment agency, the chef’s hat showed up in her thought bubble. Culinary, it is!

While she was at work, the red-head from the gym stopped by. Was he this bulked up yesterday? I guess a few hours working out can make a big difference!

Sugar Maple chatted him up, trying to discover his traits before Salix decides she wants to flirt with him. He played it pretty close to his chest, and we didn’t learn much about him, except that he really likes to work out.

“I wonder if I’ll be as ripped as he is when I achieve bodybuilder.”

Towards evening, Sugar Maple ran into Minsk as he was heading home from the Science Lab.

“Not bad,” he replied. “I don’t have everything I want, but I’m healthy. I’ve got a job I really love. I’m always happy when I’m outside. That’s enough, don’t you think?” He’s so sweet. I still remember how cute he was as a little boy in those rain boots. Who wears rain boots in the desert?

That night, after Poplar and Sugar Maple went to bed and Aspen and Salix were still at work, Niko was joined by Linda’s spirit.

“I’m worried about Sal,” he said. “We want her to meet someone, right? I mean, she’ll probably be heir. And so far, the only guys she’s into aren’t the type to treat her right.”

“It’ll work out,” Linda said. “There’s plenty of time. Think of me and I-dub! I’d just become a young adult the day we met, but he was almost at his adult birthday! He had to look for a long time–and be turned down a few times, too–before he finally met me. And look how well it turned out! Some things are worth waiting for.”

She thought of how long it had taken before Niko had come into her life. She was nearly an adult. She thought of her mom and dad, and how long it had taken for the two of them to meet. And while she reflected on this, I thought back to Cedar, who was nearly an adult when she finally met Timothy, and Acacia, nearly an adult when she finally met Kyler. And Mesquite and Anya. Paris didn’t meet Princess until he was making the most of his final days. And Willow never did choose a romantic partner. Palo Verde and Manzanita were the only two who met their loves in their youth.

Sure, we could make any relationship work–or at least work well enough to get an heir and a spare. But that’s not what we’re after. We’re after the type of love that runs through this family, the kind that Cedar started when she told Timothy, “In my love, you’ll find you’re free.”

It’s that open-palm type of love that Palo Verde and Cassandra had. It’s a love based on honor and respect, like Niko and Aspen share. It’s a kind of love that, when it happens, you open up inside–that big lotus inside of you just blooms, and you let it shine. It’s that kind of love where you know that the one who values you most is the one you’ve chosen to live your life with. You treat each other with tender regard, for you know what you hold in your open palm–this amazing gift which your love has shared with you, the truth of his or her self, right there, shared with the truth of you. 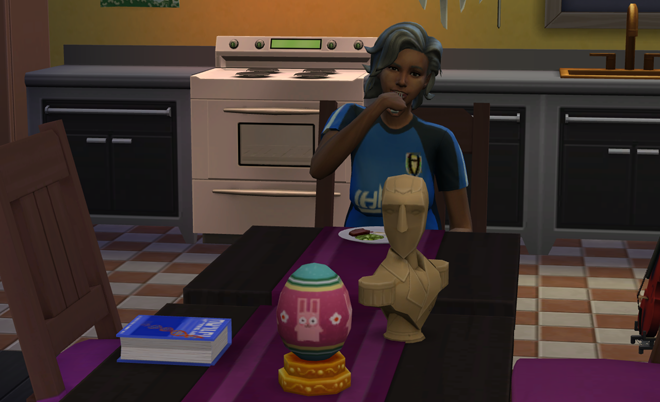 Aspen and I have trust in life and trust in the game. We know that sometimes it takes a little while to discover the one that you can show yourself to, knowing that you’ll be honored in return.