This conversation is the first part of a four-part series, with each participant hosting one part. We’ve provided links at the bottom of each part to the next and previous part. Grab a cup of coffee or tea, pull up a chair, join in, and enjoy! 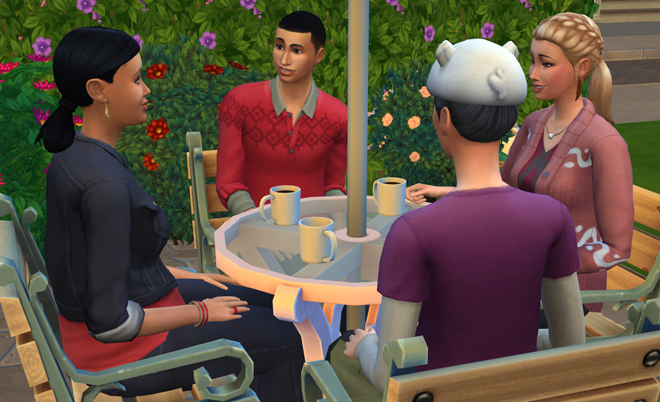 CT: Awesome Js, thanks for joining me! We’re talking with JRose (aroseinbloom, AKA Rosey ) of aroseinbloomsims.com, Jessica Brown (Jes2G, AKA Jes2Grand) of Jes2Gstories.com and the Jes2GNetwork, and Joel Rochdale (Welsh Wooly Sweater, AKA Mr. Cupcake… err.. WinterRising…. errr–I got it! SummerFalls!) of Summer Falls’ Stories.

So glad you all could join me, and I’m looking forward to continuing the conversation as we stroll through your various hard-drives, too. 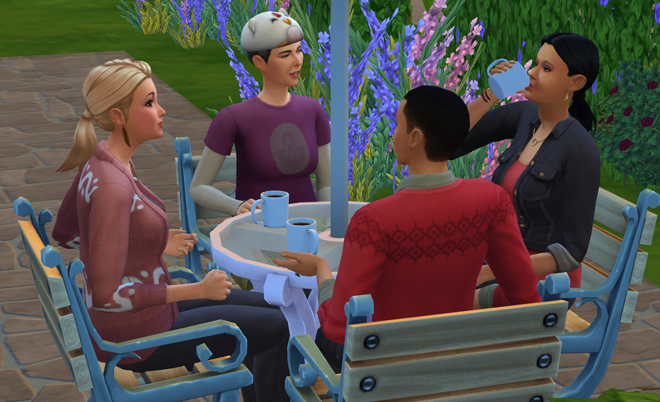 CT: You know, for months now, I’ve been receiving such joy from the friendship that the three of you share at the EA forums. It’s like this circle of support and love and respect and appreciation! It’s so apparent from the way you communicate with each other that you cherish each other, and so just being able to witness that has bolstered my spirit and brought me such deep joy! It’s a gift that you all share with the entire storytellers’ community. Thank you. 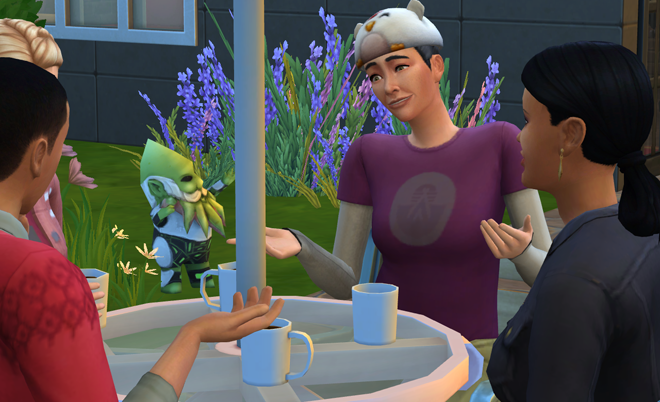 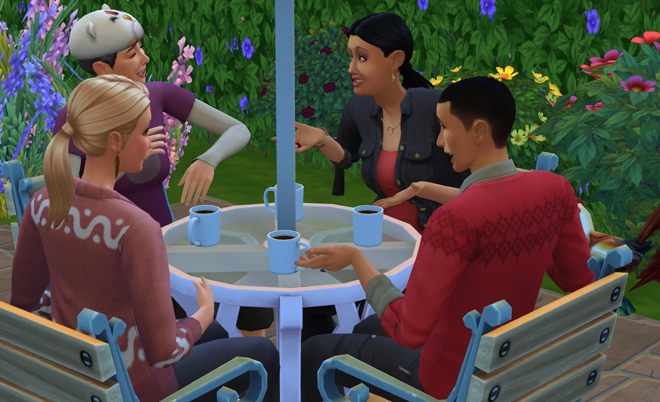 Jes2G: Thanks for having us! My first thought is that we’re all just terribly excited to have people in our lives who share two interests that are near and dear to our hearts. When I discovered the Storyteller group, I felt so energized and excited to finally have people with whom I could discuss my love for The Sims and writing. Sometimes I feel like I could stay up all night chatting with everyone! Whenever you have a large group of people, smaller groups will inevitably form because we tend to gravitate toward people with whom we have things in common–unless you’re CathyTea who has the uncanny ability to be part of everyone’s group at the same time. It’s like you’re omnipresent! 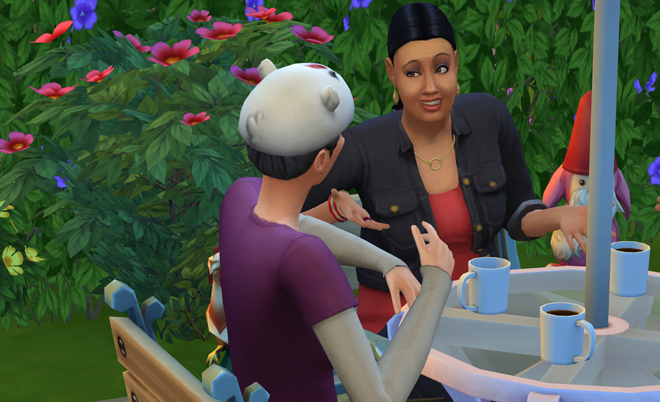 Jes2G: HA! Anyway…where was I? Oh yeah…I originally “met” aroseinbloom on my blog. She was one of the first people to comment and follow me! Through replying to comments, I got to know her a little and felt like she was, like, my twin or something! Similar thing with SummerFalls except I know he was a young buck, so he couldn’t be my twin. That’s how he became “little brother!” 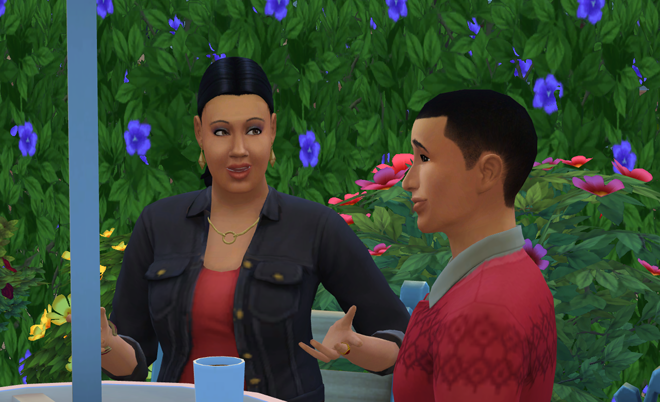 Jes2G: I just had another thought…

So, I was trying to answer the question about “the” secret, and…I don’t really know. I started to say that maybe part of the “secret” has to do with likeness and shared interests. But, then I thought, “Well…there are many people on the forums who I’m like, and of course we all share the same interests–as far as our purpose for coming together is concerned.” So, there has to be something else. Something deeper. 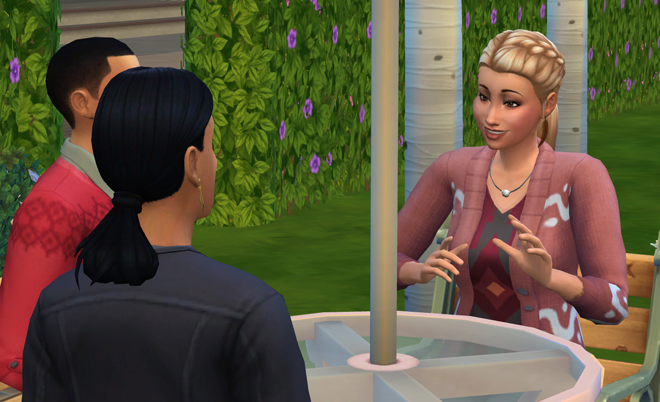 Rosey: Perhaps a willingness to share and be authentic? Again–not to say that others aren’t, but we found ourselves having genuine conversations through your comments (haha!) from early on. And same goes with Joel–there’s something genuine and open there! 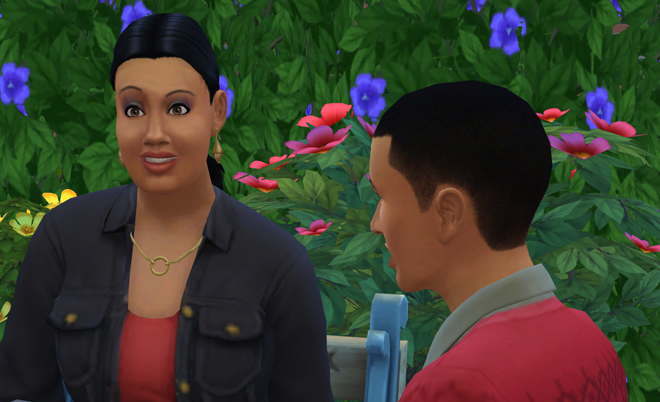 Jes2G: Truth! But, even in that, how is it different? There are many Simmers we converse with who are very genuine.

Rosey: Perhaps it’s less being genuine and more being willing to share it openly? Again, I know others do that, but maybe we just felt drawn to what each other shares–like either we’ve been there and can offer advice. Or we’re there now and can share the commonality of it. Or…we wish we could be there. I know for me (looks at her toes) I was just in awe of the fact that there was someone out there who a) loved the Sims and b) was bold enough to write about it. So…maybe I just looked up to you a lot. (blushes) 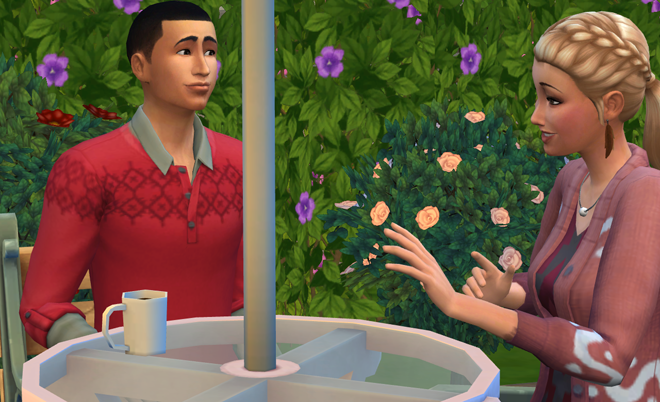 Rosey: But I think that’s what drew me towards you, Jess. As for Joel, it was very much meeting someone so YOUNG who knew who he was and wanted to share it. I wanted–and still do!–to offer whatever support I could. I wish I had someone who told me to go for it when it came to writing and gaming and being myself when I was his age. (I say that a lot when I’m talking to you, huh?) 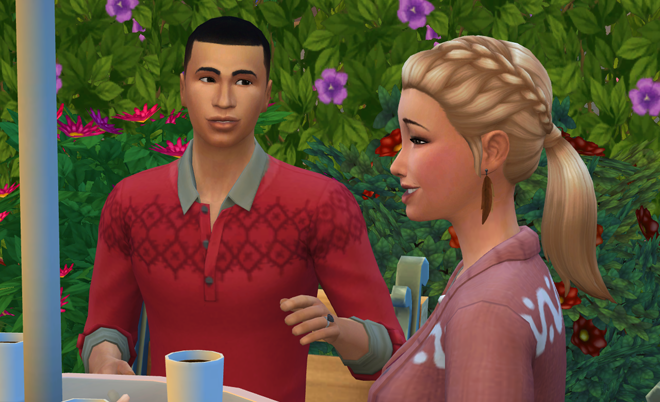 Joel: Yeah! You do, haha. I met Jes2G through the Pruett Family Legacy and I also met ARoseInBloom through comments on her blog / on my blog! I think we definitely grew closer because of S-GAS which allowed us to get to know each other more, even though we didn’t realize it. 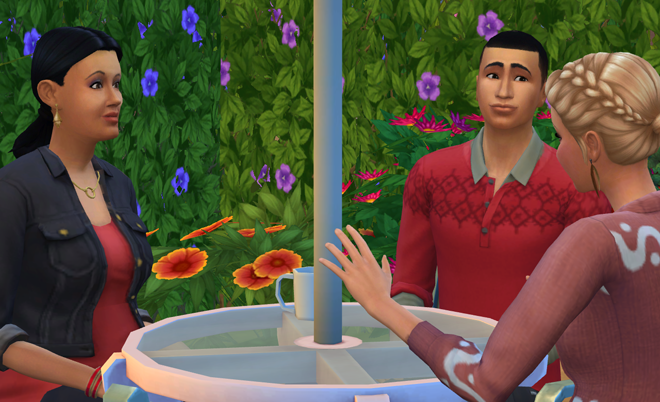 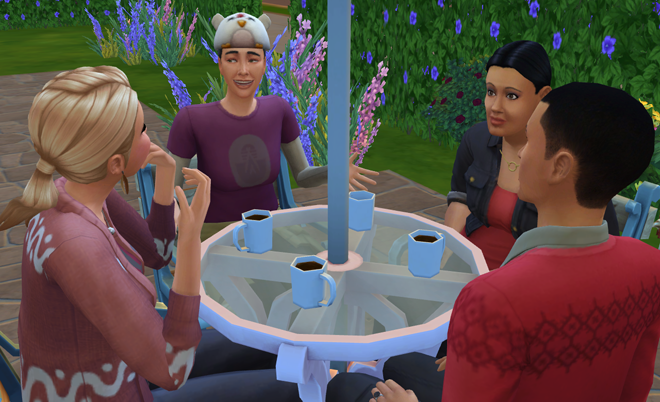 CT: I think for me, it’s a matter of sharing really deeply and really openly through my Sims stories. And in my life, going all the way back to when I was a little child, I was very much used to the experience of every time I shared deeply, the people around me–family, friends, teachers–would not understand. They’d look at me the way that the residents look at Silduun in my story “Where I’m From.” When I decided to write this blog, at first I had so few readers that I just decided to simply write it for myself. Write my own truth and let the Sims help me express it. Then, when I found people responding–and Rosey, you were one of the first to respond to the posts I felt were most risky–like remember that one you shared on facebook? Anyway, when I found that there are people who can relate to what I’ve always been told were my “quirky, off-the-wall insights,” it felt amazing. Like I was no longer alone in my perspective. So, that right there is certainly grounds for developing solid friendships. 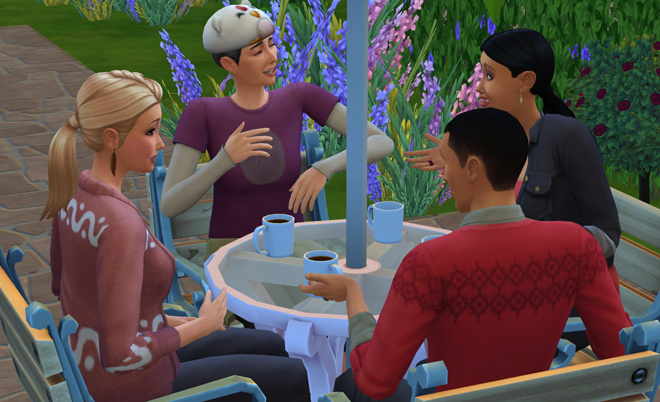 CT: With that degree of openness, it’s important to trust, too, and I can see that the three of you have developed safety and trust with each other. Your way of talking with each other is full of respect and affection, even when you tease each other. 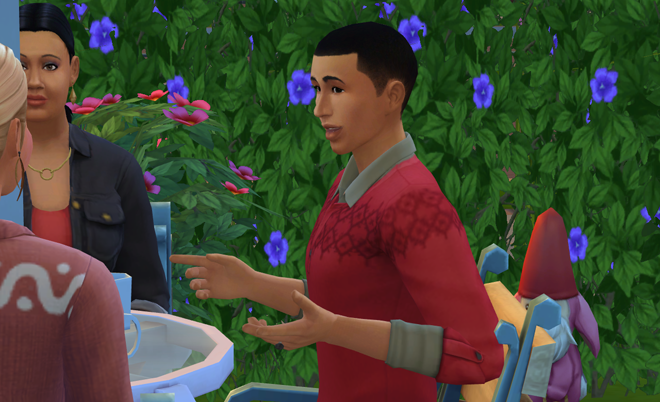 Joel: I feel that talking with both Jess and Rose, I feel confident in being open with them, although I’m not sure what the ‘secret’ is. I do agree with Rose about being willing to share things openly because that’s what friends do, I think through everything that we’ve shared between the three of us, we’ve certainly grown a bond. Also, even as a young person (sorry everyone), I feel that when I ask Rose and Jes for advice, I’m getting it at someone who’s been at the writing craft longer than I have and I really do build on their advice. 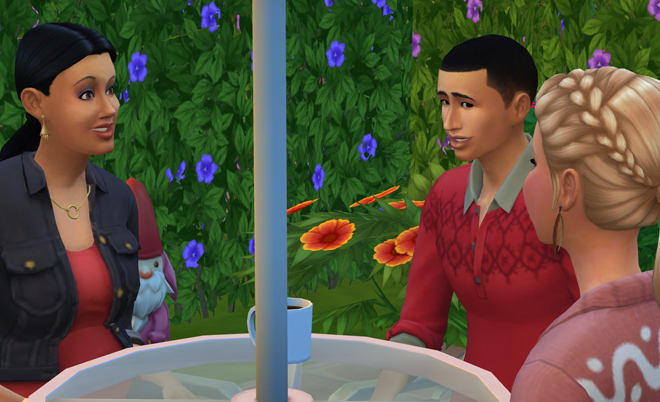