The private journal of CT 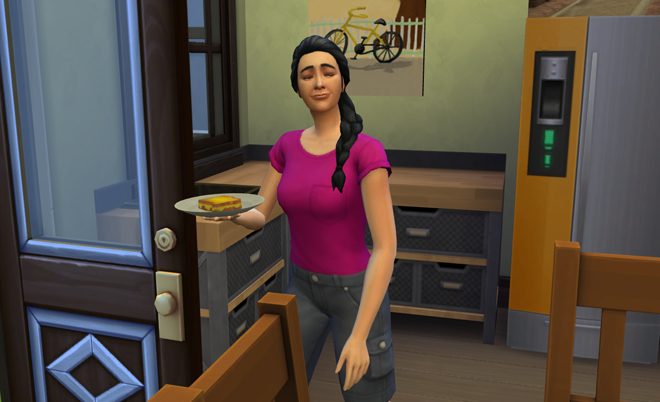 I opened my eyes, and it was Session Four! This session is going to be amazing. We’ve got three goofballs (including me), three cheerfuls (including Joel), two grandkids of the one-and-only (ok, make that the 3.9 million-and-only) Alexander Goth, and a geeknik and a neatnik, and I’ll be the beatnik.

We started the session in true Animal Hat beatnik fashion–with a dance!

As I watch these kids, I realize that everyone, each one of us, was once somebody’s baby. 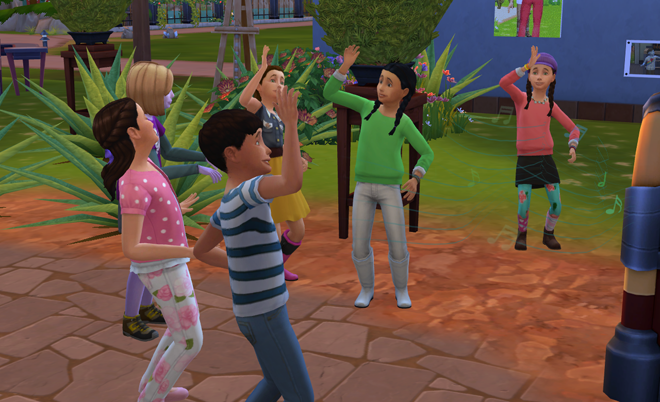 Here’s cheerful Dillan. He and his sister came to us from a hard drive halfway round the world. When it’s morning on our hard drive, it’s night time on his. We’ll take such good care of this little bear–even his mom Erica will be able to rest at ease. (And yes, I did remember to call her as soon as Dillan and Violet arrived.) 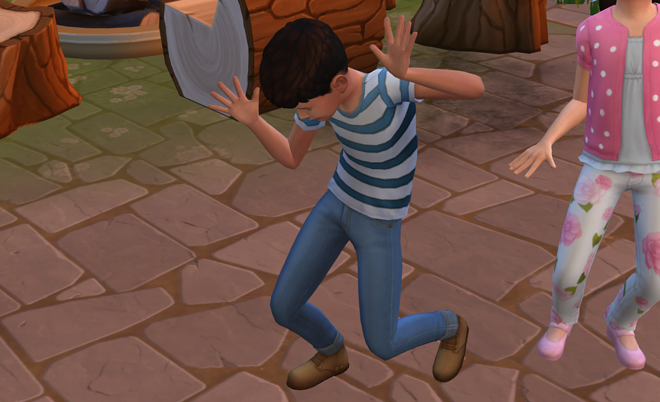 Felicity is our one neat Sims. She’s one of Alexander Goth’s granddaughters, and I can see his features in her face. She’s got those AG eyebrows! 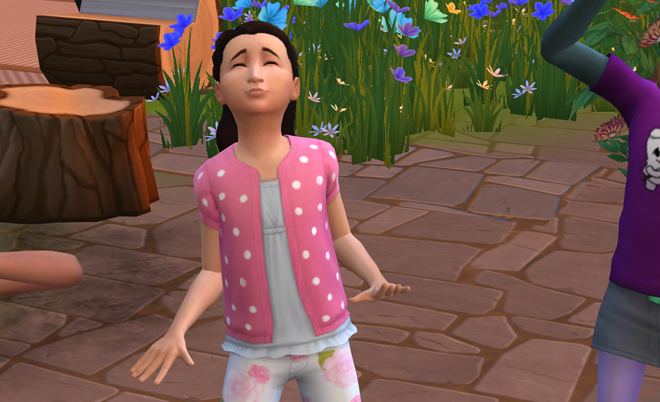 Her cousin Fiona is one of the goofballs, so she and I hit it off immediately. She looks a lot like her mom, Elise Tesla, who’s one of my favorite Sims in the realm of Legacy stories.

Violet, Dillan’s sister, is our new resident geek. She’s got great taste in accessories, with that little geeky hat, her daisy chain necklace, her bracelets–and wait until you see her socks and leggings! The cutie with the braids is Amelia, Joel’s little sister. She’s cheerful, and the more I get to know her, the more I suspect there’s a hidden goofball trait in there somewhere. I mean, look at that face! 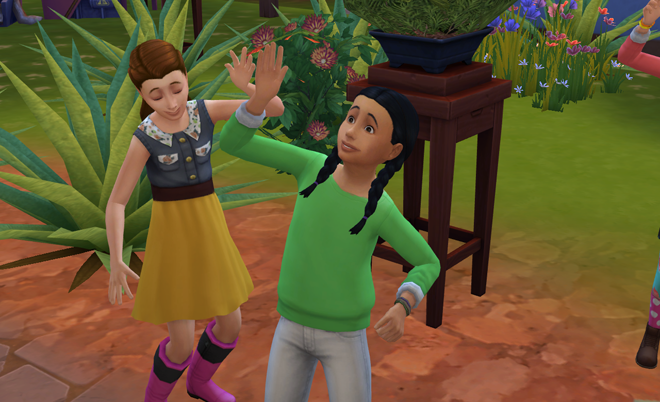 And Lola. One of #teamgoofball. This is a special day for Lola, a birthday and a day for remembering and honoring who she is: a beautiful, magical girl, who will always be loved and who will always have a spot in her mother’s heart. 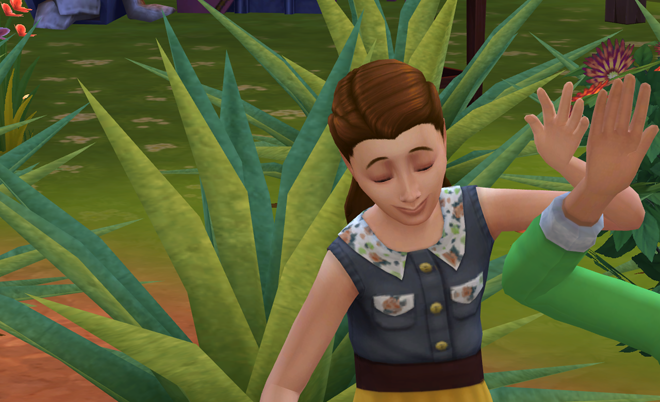 Lola and I had lunch together shortly after the kids arrived. 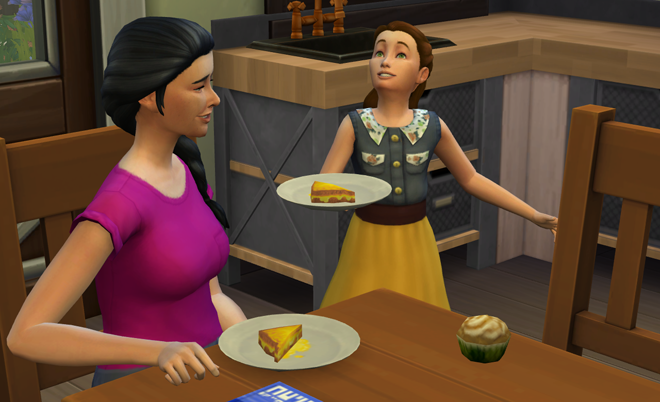 “I can feel this is someplace magical,” she said.

I smiled. Joel and I were just talking about magic–the magic of the secret of his cupcakes, the magic of imagination, the magic of how, in no time at all, we come to love these kids so much!

“Well,” I said, “when you’re someplace magic, you’ve got to keep your eyes open! You never know when you might see a fairy! Or a gnome. Or a little garden elf.” 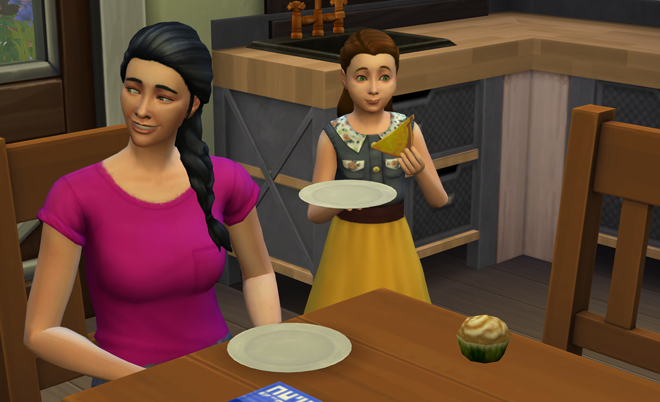 “Are there really such things, Miss Cathy?” she asked.

“Of course!” I answered. “What else do you think makes this place magic but the elves, gnomes, and fairies?” 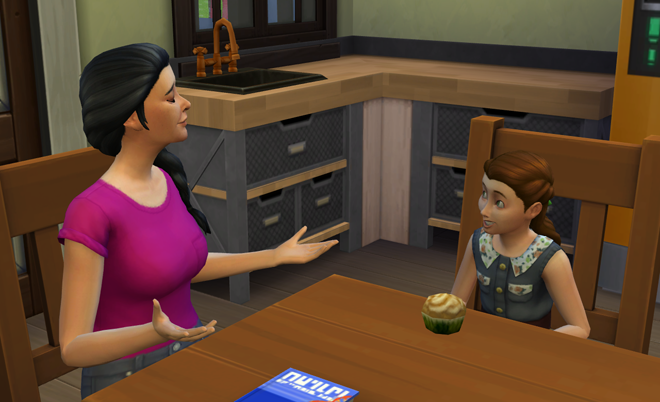 “Why, just the other day,” I continued, “I was coming around through the calendulas, and what do you think I should happen to see? There was a tiny fairy drinking out of a buttercup!” “I asked the little fairy, ‘What are you doing here?’ ‘I’m on a mission,’ said the fairy. ‘I’m searching for someone very special.’ I didn’t think anything of it. I mean, fairies are always looking for someone or something special. But the next day, when I was watering the garden, I saw the fairy again. ‘Have you found the person you’re looking for yet?’ I asked him. ‘Not yet,’ he replied. ‘She is a little girl with a pure heart,’ he said. ‘Oh, you’ve come to the right place. We’ve had lots of little girls here,’ I answered. ‘Yes, but I haven’t found her yet.’

“‘And what will you do when you find her?’ I asked the fairy. ‘Why, I will let her catch me in her hand, and then I will ask her to put me in the pocket of her dress where I will make myself a home, and then I will live with her always.’ ‘What will you do when you live in her pocket?’ I asked. ‘Why, I will be her magical helper!’ the fairy replied.”

“And what happened next?” Lola asked me.

“Why then the fairy drank his buttercup ale, and I finished watering the garden, and then Joel and I ate some of his delicious butterscotch cupcakes!” 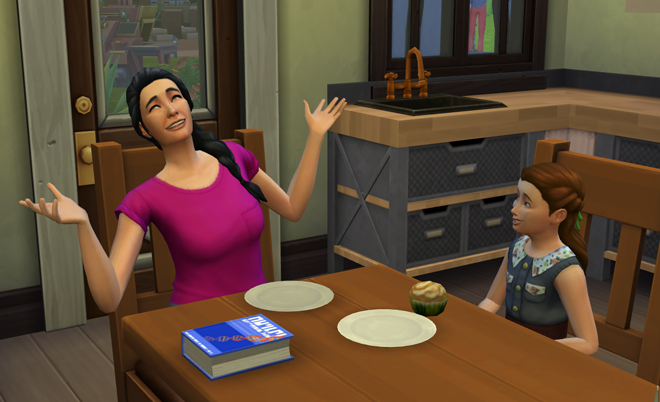 I got up to clear the dishes.

“Don’t look now, Miss Cathy,” said Lola. “But I think there’s a fairy here! In the kitchen! And I think I have the little fairy in my hand!” 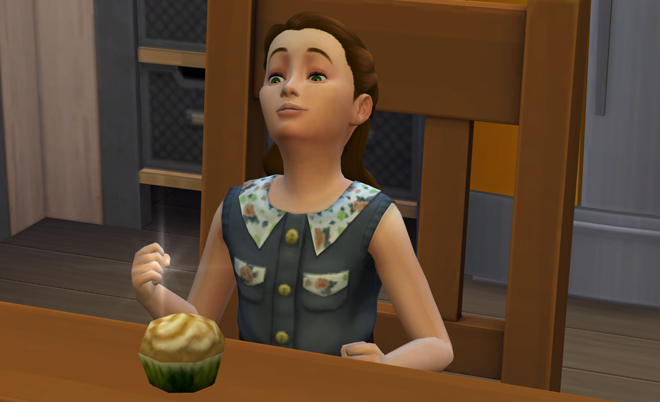 “Quick! Put him in your pocket!” I said. “And you will have your magical helper with you forever! You must be the girl with the pure heart. The one he was looking for!”

While Lola helped the fairy make a home in her pocket, I went around to check in on the other kids to make sure everyone was settling in ok. There was Joel, eating with Felicity.

“Do you think I can hire a maid?” she was asking. “I saved up my allowance and I brought all my money with me.”

“Oh!” said Joel. “I don’t think that will be necessary! The Cathy Team does a pretty good job keeping this place clean and fixing stuff that breaks. And you kids can always help with the dishes–so I think we’ll be able to keep everything tidy and neat.” 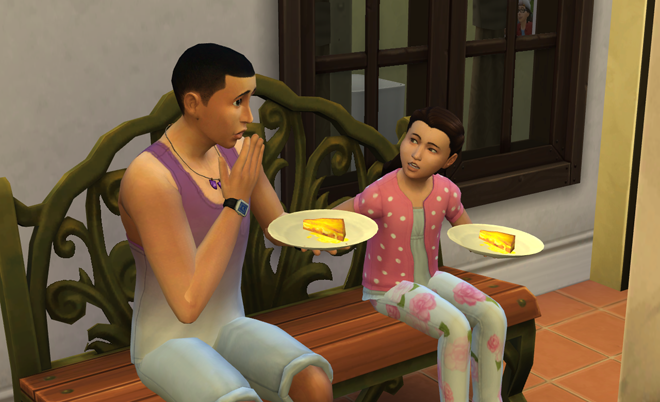 Violet brought her lunch out to join Fiona.

“Heh!” Violet said. “You are the exact same color as the flowers. Exactly exact. Want to know the hex code?”

I was impressed. I’ll need to make sure that Violet’s around next time I’m doing web design work. I bet she’d be the perfect one to advise me on my color palette! 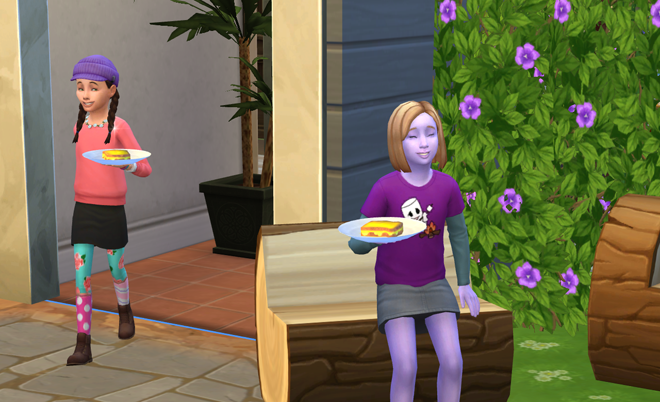 Amelia and Dillan were sitting together on the log bench.

“Do you think we’ll see any bears?” Amelia asked.

“Bears?” said Dillan. “You mean the big furry ones?”

“Yeah. Like big brown ones. Or white ones. Or even panda bears!” 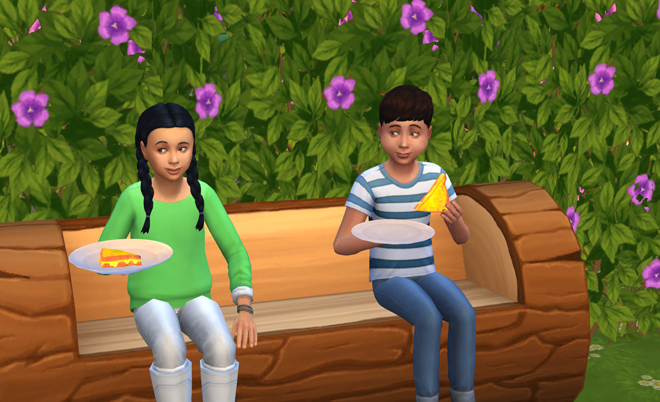 “Don’t look now,” Dillan answered, “but there’s a ginormous bear right behind you in those bushes!” 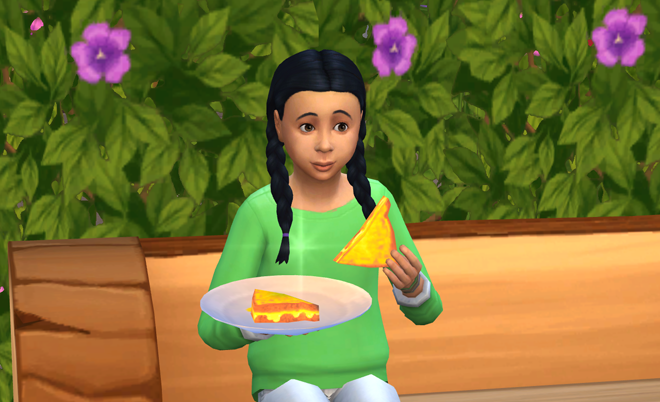 After lunch, I followed the sound of raised voices, and I found Dillan and Felicity making faces in the mirror and scolding. 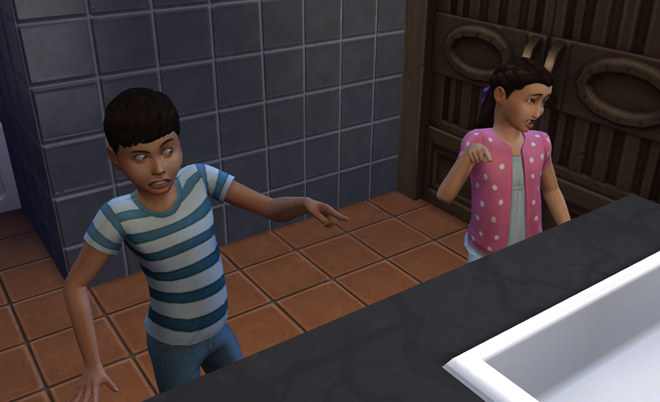 I was about to intervene, when they started cracking up.

“That’s just exactly what my aunt sounds like!” Felicity laughed.

“My mom scolds just like that when she’s all high-strung nervous from too many dirty dishes,” Dillan said, and they laughed and laughed. I don’t like to encourage the kids to make fun of adults, but I realize, too, that it can feel liberating for them to do so. We adults hold so much power of the lives of these little ones–if they can cut loose now and then, it’s just what their spirits need!

I headed back into the kitchen for seconds on the grilled cheese sandwiches. There was Joel, looking around at all the kids.

He’s right. We’ve got five girls and one boy! Joel and Dillan are a little outnumbered! “I don’t mind,” Dillan said. “These girls are kind of silly. And I always like a joke or two. Plus, this way, it won’t get confusing for them.”

“You know,” Dillan answered, “they won’t have to wonder. When they need a prince to come and rescue everybody, they’ll know exactly who to ask. It’s just me!” 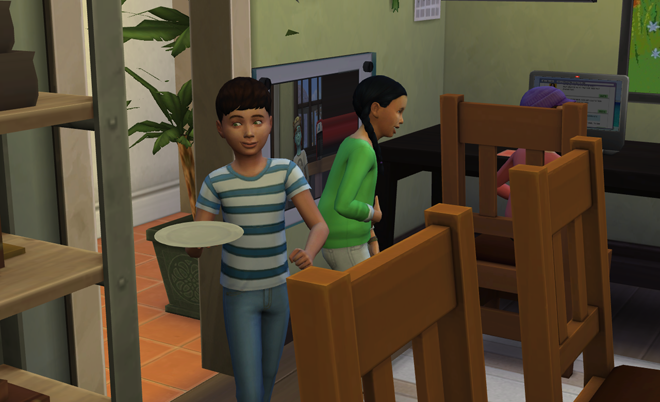 I’m feeling good about our first day of the new session. All the kids are making friends with each other, everybody had a good lunch, Dillan cleaned up all the dishes on his own accord, and we had plenty of time to dance and play.

On my way to practice yoga, I walked past the Tesla cousins at the doll castle.

“Oh, no!” Felicity was whispering to her princess doll, “you don’t say! Cobwebs in the attic? And dust bunnies under the throne? Quick, Fiona! Call the royal maid and the royal maidster!” 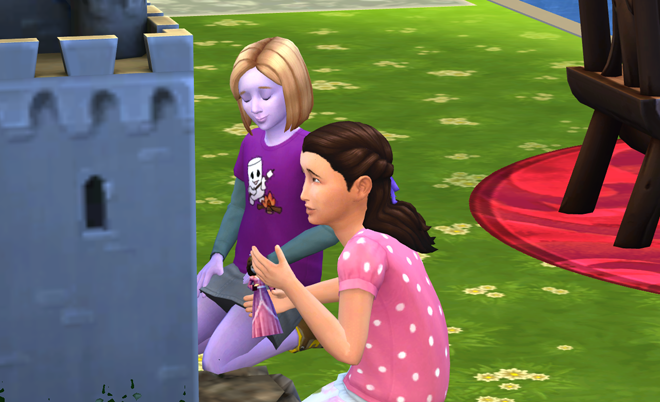 Behind the yoga mat, Lola swung on the monkey bars.

“Miss Cathy!” she called. “Look at me! I’m getting so strong! It must be my magical helper!”

“It could be!” I replied. “Or it could be that you’re getting strong all by yourself.” 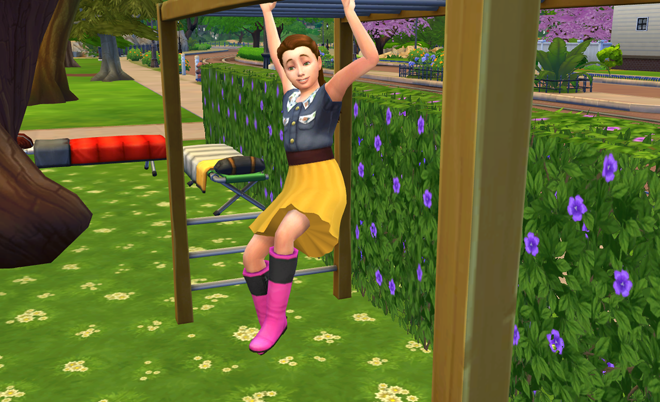 It’s funny: when it’s a first day, we always feel that it’s a special day. But when I look around at these six kids, each one so unique and funny and perfect in his or her own way, I feel that every day is going to be a special day.