Late one night, while she was preparing a meal for herself after work, Sugar felt her aunt Poplar’s spirit.

I remember what it was like, Sugar thought. Only Poplar wasn’t my mom. Just the family aunt. 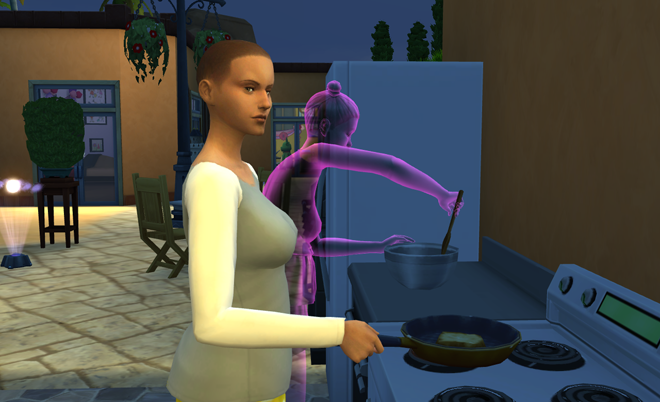 So many memories are returning.

Earlier that evening, Tam cam home from a day at the art studio with mischief in her eye. This wasn’t unusual–her chief of mischief aspiration often lit a spark under her naturally playful nature. Sugar headed off for her gig as entertainer while Tam joined Redbud for some practice at the chess board.

“If this piece really is a rocket ship, like Alder says, then I should probably put it on the square that looks the most like outer-space.”

“I can’t believe you just made that move,” Tam said. “Did you really mean to leave your queen undefended?”

The mother and daughter played together for a while, often laughing and joking. Tam described the painting she was working on for a commission–a large symbolic piece with swirling blues and greens, interrupted here and there with slashes of red. “It’s like a family,” she said, “all these contiguous colors with wild sparks of rare events!”

Red talked about her first day at school. “We had fun, pretty much,” she said. “I mostly talked with this teenager, Tani. She’s nice. And Alder talked to her, too. Can we go to the park afterschool tomorrow?”

“Sure,” said Tam. “You both need to make kid friends for Social Butterfly, right? And then, you never know! One of the boys you meet at the park just might grow up to become your husband! Don’t laugh! Happened to your grandma, and it happened to me. It could happen to you, too!”

“I’m not sure I want to get married, Mom. I’m going to be a writer, like Aunt Shug.”

Then, Red moved her bishop.

“Do you even see the chess board?” Tam yelled. “How can you leave your king exposed?” 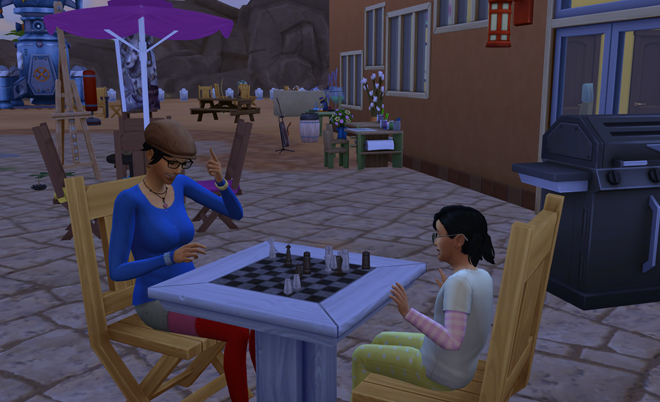 Just as soon as her frustration rose, it faded, and Tam began laughing and joking again, telling Redbud about when she, Doug, and Aunt onezero met Nathanael at the park, back when they were kids.

But for Redbud, it was harder to shake the effects of her mother’s explosion.

As soon as her mother’s stories were over, she excused herself and went inside to eat alone. A cookie helped.

“Yeah, I’m fine. I’m just learning what moves are ok in chess and what ones aren’t. There’s a lot to learn!”

“It’s not so important,” onezero said, “to remember all the rules and all the principles. It’s ok to make mistakes. You know, your mom is my best friend. She has been since we were about as big as you. And do you know what? Your mom makes a lot of mistakes.”

“Oh, yes!” replied onezero. “Especially when it comes to knowing how to talk with those she loves best.” “You mean I’m not a bad kid for moving my bishop to that square?”

She remembered how she felt as a little girl when she heard Poplar yell. Then she remembered the day that she realized that this was all Poplar’s stuff. It was never anyone else’s fault when Poplar yelled. It was never prompted by anything. It was just Poplar’s mess bursting out over whoever happened to be around–and often, those she loved the most.

Once she realized that, the sting went out of Poplar’s words. She was able to feel compassion, even, for this family member whose own challenges limited the feelings of affection that her sisters felt for her.

I guess it wasn’t all bad, Sugar thought. I learned compassion.

She remembered the day she told Poplar no more.There were be no more yelling in that house. And I learned how to establish healthy boundaries. 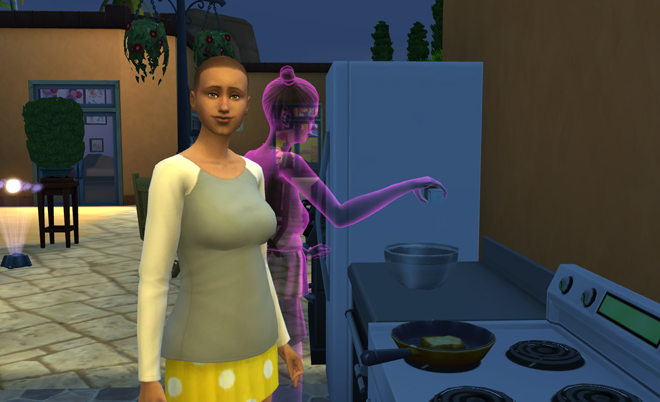 Maybe my grandniece can grow stronger through this experience, too.

Sugar took her meal into the kitchen, where Salix and Redbud joined her at that table where so many generations have sat so many times.

“Sal,” laughed Sugar, “Remember when we were growing up? Remember how Aunt Poplar used to yell all the time?”

“Do I ever!” said Salix. “Our aunt would really let loose anytime she felt like it! It made her happy!”

“Really?” Redbud asked. “Why would someone feel happy after yelling at somebody?”

“I’ve never been able to understand that,” Sugar said.

“But it did!” said Salix. “Your great, great aunt was not only mean, she was hot-headed, too!” 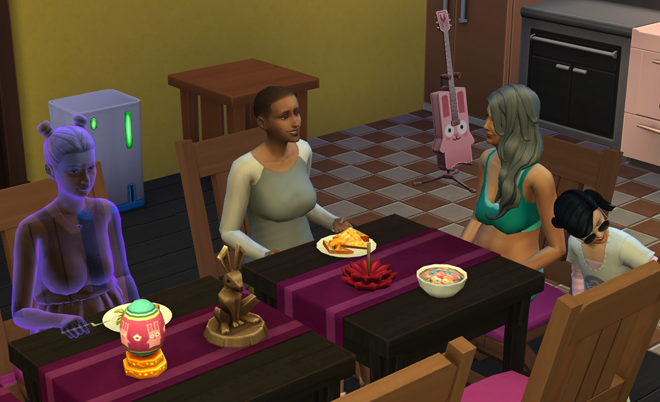 “Remember how happy she’d be after she told off one of our friends?”

“Didn’t she love anybody?” Redbud asked.

“Oh,” replied Sugar, “I think she loved pretty much everybody!”

“She just liked to say what was on her mind,” said Salix, “and she never remembered to check in to see how her words made the other person feel.”

“No,” said Sugar, “she was well aware of the power of her words. She just enjoyed being mean. She wasn’t mean because she didn’t like somebody–usually she was the meanest to the ones she liked the best. She just liked yelling!”

“Do you know who was my best friend when I was growing up?” Salix asked her granddaughter.

“Didn’t she ever yell at you?” Redbud asked. “You know, when you were bad?”

“Isn’t it bad to leave your king exposed?”

“Even my chess play?”

“So how did you stay friends with Great Aunt Poplar when she would yell at you?” Redbud asked.

“Well,” continued Salix, “I realized she didn’t mean it toward me, for one thing. And she always apologized. And I just saw it as part of who she was. I guess I just never took it personally.”

“But it still wasn’t right, was it?” Red asked.