“What did you decide, Mom?” Redbud asked at breakfast on Tamarind’s birthday.

“I’ve decided I’m running away to join the circus,” she answered.

“You’ll never know until it’s too late,” she answered in her best Jimmy Cagney voice. “My parents are nuts.”

“You look… wow,” Nathanael said, as Tam strolled past in her party dress.

“I’m still thinking about the circus,” she said. “I hear there’s a train runs past at five o’clock!”

It was a great party. Nathanael’s sister Selina happened to drop by just as the party was getting started. She and Doug danced all afternoon out by the bar. Doug’s been a confirmed and contented bachelor all his life, but seeing him dancing with Selina made me smile. Both elders seemed confident and sure in themselves. Their jokes rested on an understanding that can form between people who’ve lived for a while and have learned about themselves and life.

Nothing beats the old songs.

Sugar baked a chicken and whipped up two cakes. Then, her catering duties complete, she painted a masterpiece, a landscape with a row of cypress before a clouded sky.

Maybe we’ll take our cue from Shug and name one the gen 9 kids Cypress. 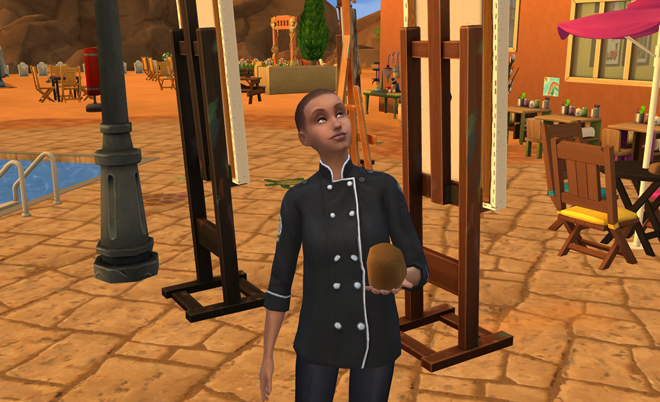 The time came to blow out the candles. Tamarind, like Doug, had had the entire party to drink the youth potion, if she had chosen to. It stayed in her inventory, and she composed her wish.

It must be a great wish with a smile like that.

She spun into a resemblance of her grandma Aspen. She never knew Aspen, except as the ghostly figure who held her on her first day here in this world.

“There’s no reason to complain about getting older,” she said, “when it’s what one chooses.”

She’s as beautiful as ever.

Late that night, after Tam went to bed, Nathanael and the kids sat in the kitchen with a midnight snack.

There wasn’t much to say, but somehow, it just felt good to not say much together. Their food tasted better in good company.

Two of these three are gluttons!

“Won’t be long what?” Alder asked.

“Till we pass the torch.”

Sugar sat outside in the starlight. She wasn’t that close to her niece. They’d been close, before Tam rolled the mean trait. Sugar was unable to abide meanness. She couldn’t stand it from her aunt Poplar, and she wouldn’t tolerate it from her niece Tam. She loved Tam–as much as she’d loved any member of the family. But they were not friends. Every time Tam made a cutting comment, it snipped the string of their friendship shorter and shorter.

And still. To watch her niece choose elderspin. That was something. Sugar knew there was wisdom in both: in drinking the potion and in spinning through the sparkles. Both required courage. Both had power. What mattered was the choice, more than the outcome.

Each has its own rewards.