I can’t say that I’ve ever seen Doug happier than he was on his last day. Dancing on your last day is a beautiful thing.

He shared a hug and a joke with his aunt Sugar.

And a joke and a hug with his niece Redbud.

“You live a good life, little Redbud. Make us proud.”

Early that morning, before the kids went to school, Doug joined them for breakfast.

“What a family we’ve got,” he said in his gravely voice. “We’re quite the crew!”

“Zoom!” said Alder. “I just wrote an essay about our weird and quirky family! Got an A- on it, too!”

“I took a geopolitical approach, Alder. What approach did you take?”

The day before had brought its share of sadness. Grim came for Alvaro, the formerly red-haired entertainer, who had dropped by for his daily visit. Preston and the former ranger, Alvaro’s roommates, happened to be over, too, and they, along with Alder and Adrian, another family friend, witnessed the appointment.

At least if he goes here, we’ll get to see his ghost now and then.

He had a cup of youth potion in his inventory, and he could drink it any time. That wasn’t his choice, though. He’d had a full life, and he wasn’t all that sure there was that much left here for him.

He painted his last painting with joy.

His last painting expressed his reflections and feelings. In the center of a field of soft colors that made one think of spring, a dark hole. What was it doing there? It was finality. 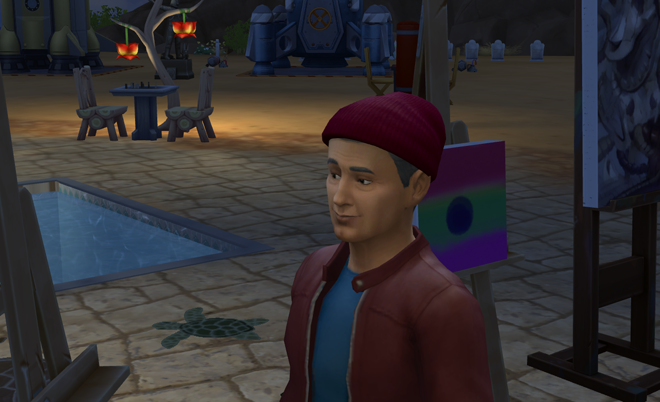 After Doug put away his palette and went to bed, Chandler’s ghost stopped by to check in on his daughter.

“Are you gonna be ok, after your brother goes? You know, you’ve got a little while yet before you’ll be joining him. You gonna be ok here without him for a while?” 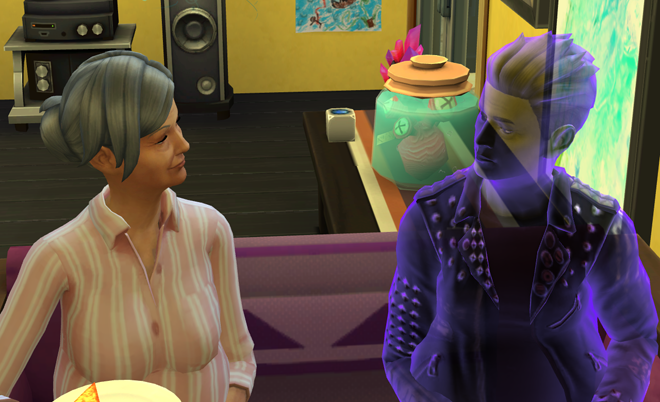 “Thanks for asking. I can handle it.”

That was all the reassurance he needed. He left his daughter to think about what was coming and to remember what had been.

In the evening of the last day, after the shared meals, the hugs and jokes, and the dancing, the time arrived.

“I’ll be right there!” Doug said with a smile.

Though he’d been dancing alone, everybody came running, even the neighbors, already heart-broken from yesterday’s reaping.

“I’ve seen so many of these. It doesn’t get easier.”

Grim was quick. One swipe and it was done. I don’t know whether to write, “No mercy,” or simply “Mercy.”

Afterwards, he joined Tam in the outside kitchen.

“Let’s not rush things,” she replied. “I may be fitter than you think. Or at least, ornerier.” 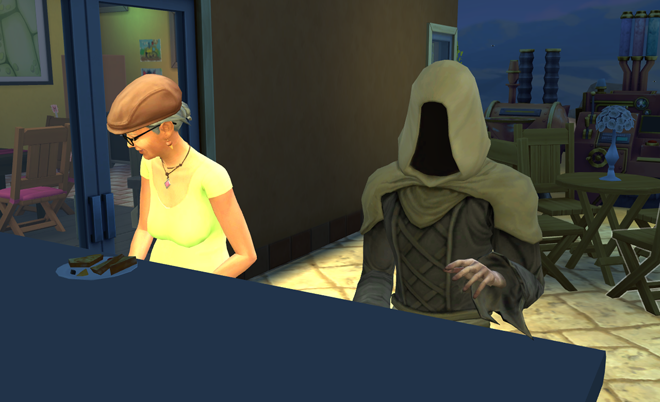 “Ornery I can believe! I’ve been watching you!”

The following day was Sugar and Nathanael’s elder birthday.

Sugar met the day with a glad heart, and Tam joined in her spirit of celebration.

But Red missed her uncle too much to comprehend how anyone could think about the happiness in a birthday.

And onezero felt disturbances in the emotional waves and emanations. Harmony was not here.

“Avast, ye unsettled thoughts and feelings! Away! Away!”

The kids called school to claim vacation days, the morning progressed, as mornings do, and when ten o’clock rolled around, Sugar organized the party.

It was a quiet gathering, with brunch in the kitchen, and New Age music on the stereo. Just as the caterer put candles on the cake, Sugar reached into her inventory.

“So that’s how you do it,” Nathanael thought.

Young again, she danced alone, surfing the zest that’s been her sustenance since she burst out of the bassinet, already full of her own powerful style. When she finished her dance of celebration, Red claimed the dance floor, bringing along the Park Boy Clarence, wearing a clown hat, and their neighbor Preston. Nathanael joined them, too. It was a contemplative dance, a way to think while moving. They chatted a little, but mostly they thought. 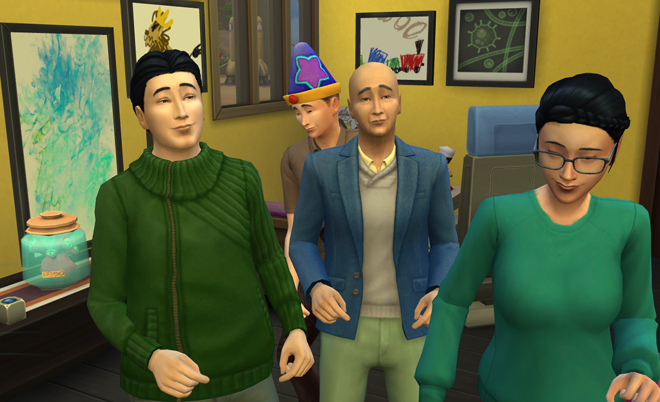 Nathanael’s thoughts led him to make his decision. This time, he wasn’t aging up.

He and Tam had talked about it, back when she was deciding whether she’d go through with elderspin. She’d told him then that she would be fine with him drinking from the cup, even if she didn’t.

“I don’t want Doug to go alone,” she said. “I know it sounds weird, but he and I are twins. I’d feel like half of me were missing if I stayed and he left.”

“But how do you think I’ll feel” he asked, “if you’re gone, and I’ve still got all this time?”

“You?” she laughed. “You’ll be fine! You’re a loner, don’t forget. And independent. And you’re a glutton, don’t forget, who always wants more, with a creative person’s love of life. You’ll be A-okay, if I’m here or if I’m in the nether-there.”

“If you do, I’ll be genuinely happy for you and for the children,” she’d said.

She watched him now, at the party, as he pulled it out of his inventory and drank it down. He’ll get to meet our grandkids, she thought. She is genuinely happy.

Staying is a lonely decision and might require even more strength than the alternative. But if you’re a loner Sim, being alone isn’t such a bad thing.

In my foolish conceit, I like to think it’s out of regard for me, that she knows how many times my heart’s been broken: Cedar and Timothy; Acacia and Mesquite; Palo Verde, Cassandra; most profoundly, Willow; Aspen, Madrona, Poplar; and most recently, Salix.

I like to think Sugar’s sparing me more grief, and that she’s encouraging all the others to at least give this choice ample consideration.

In sober reflection, I’m sure it has not much to do with me, and everything to do with her own commitment to the cause of Sim self-determination.

I am just grateful to be the unwitting recipient of her bold acts.

Live on, Sugar, and spread the word.