Sugar thought about the long day. Her great grandnephew’s birthday had been a success. He deserved a good birthday, she thought. Jeffrey Pine is a great kid. Make that, a great teen.

Sugar loves to listen to the sound of the dishwasher. It helps her think.

J.P. had been quiet at supper the night before.

“What are you thinking about?” onezero asked him.

“We’re studying life in school!” Cypress said. “It all starts with gametes.” 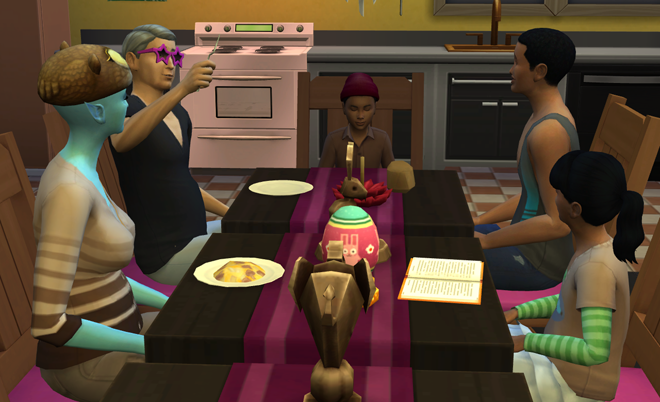 After supper, Sugar played an impromptu concert out under the mesquite.

“I feel it’s a night for Bach,” she said, before launching into the partita for solo violin.

The logic of Bach’s music appeals to J.P.’s mathematical mind.

Before bed, Redbud gave her son a big hug.

“For all sorts of things,” she answered. “For being such a good kid. For completing all four aspirations. For being my dad’s best friend. For being the next to last kid who will become a teen while the legacy’s still underway. And most of all, just for being you.”

Cypress couldn’t skip school for her big brother’s party. She had to earn her A for her Whiz Kid aspiration.

She didn’t mind. School’s got all things great: the park boys of the G generation (that’s for Great!), lots of new jokes to learn from the funny kids, and lots of jokes to tell to the new kids. Plus, she’s got a nice teacher. 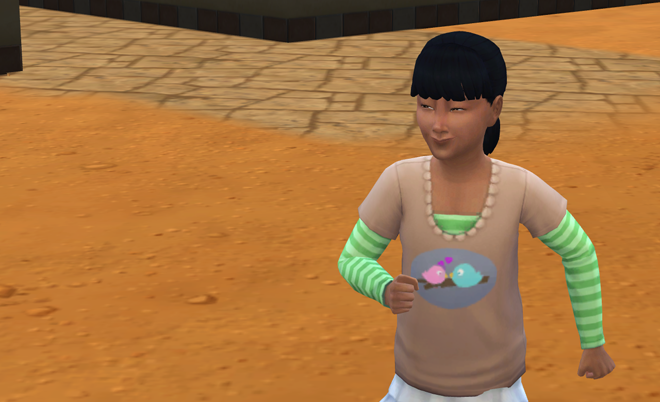 The party started early with dancing by the poolside.

Father and son morning dance. It always throws me off to see the son gray and father still youthful. That’s what happens with free-will youth potion guzzling!

J.P. was upstairs, finishing the extra credit that he didn’t have to do.

“It’s just so fun!” he said. “It’s interesting. My sister was right! It all does start with gametes. And then, you get the zygotes! Now that’s coolness awesome sauce in a cherry nut bowl!”

“J.P.!” Redbud called from the kitchen. “It’s your birthday!”

He took a moment just to feel what it’s like to be a kid. Remember this, he thought. Right now, this moment is perfect. Remember it, so anytime that life gets tough, you can know what “just right” feels like. 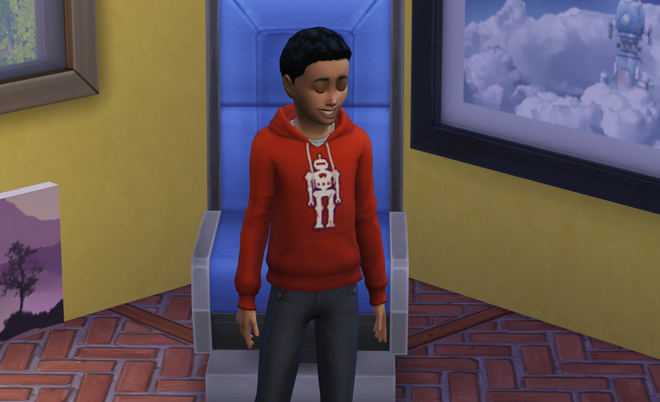 Since the party happened during the day, all the kids were at school, and that left grown ups for the only available guests, and by now, all the grown ups that the family knows (namely the Gen 8 park boys) are all old men.

They still know how to have as much fun as they did when they were kids, though.

onezero looks so adorably amazing in her caterer’s outfit.

One of the park boys helped himself to the chocolate cake before we put candles on it, so onezero quickly made the sugar-free carob cake, but the party ended before the cake came out of the oven.

No matter–Nathanael was there to cheer for his grandson’s birthday wish.

“To my best little friend! Who soon won’t be so little! But you’ll still be my grandson!”

And Redbud took a moment out from the after-party clean-up to watch. 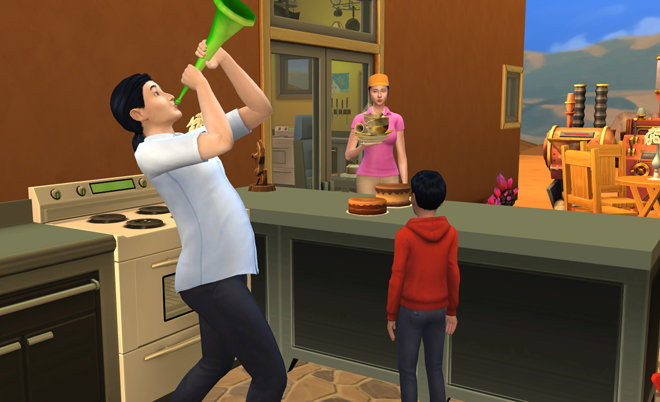 He aged up hungry, with crazy hair.

“Ha! You look awesome!” said Nathanael. “Is this what you call awesome sauce on an ice cream cone?” 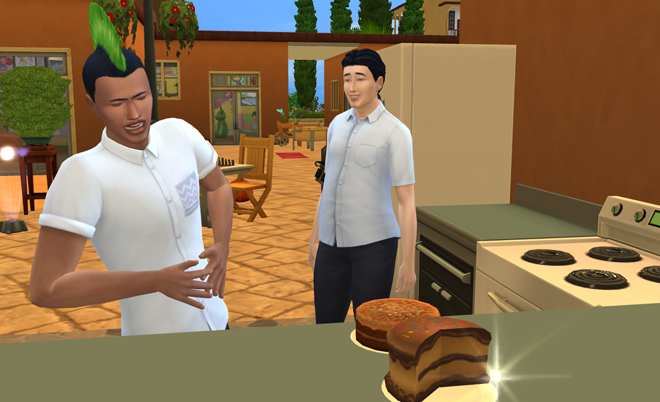 Just get a piece of cake! It’s ok to eat cake on an empty stomach! It’s just digital!

J.P. took his cake inside to join Sugar.

“I hope you can teach me all about cooking,” he said.

“I’d be delighted to,” she answered.

“And I want to learn how to fish, too,” he continued.

“Can’t help you there,” she said. “None of us can. We’re not really a family of anglers.”

“This cake smells amazing,” he said. “What, is it date-sweetened? Awesome sauce!” 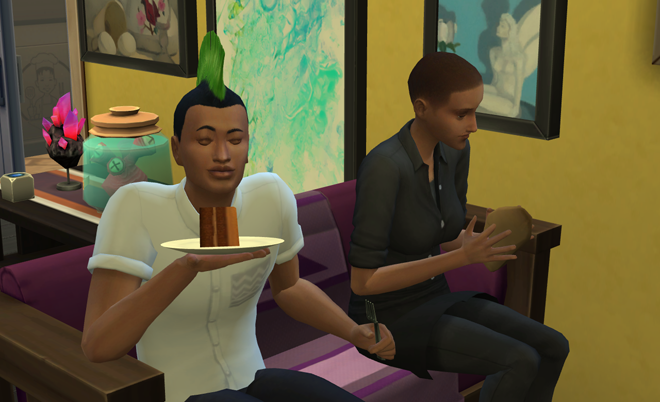 Oh, yes! He rolled foodie. And isn’t he gorgeous?

“So. Interesting hair,” Tomas said, joining J.P and Sugar. “Is it a social statement?”

“Sort of,” J.P. answered. “More like a tribute. I wanted to do something to honor the family names. You know. How we’re all named after trees.”

“Well, you did good there, son,” replied Tomas. “Looks like a bunch of pine needles! From a Jeffrey pine, no less!”