I’ve been tempted to rush Cypress into love. I want Tomas to be around when the gen. 10 baby is born, the legacy ends, and we turn off aging to begin something new.

Hearing that gardeners are the new mailmen, I sent Cypress to the park on her first morning of young adulthood, the day before the family headed off for their short and fateful vacation to Granite Falls.

In the gray light before dawn, Cypress joyfully settled down to a solitary game of chess.

“So many options before the first move is made!”

The park was alive with the sounds of the approaching morning. Song sparrows sang from the shrubs, warbling vireos from the branches, and in the pond, fish jumped.

Relishing the vibrancy of wood and meadow, so different from the high desert where she’d grown up, Cypress slid into bliss.

As the sun rose, Sims filed into the park, and an older man joined her at the chessboard.

“That’s ok!” Cypress replied, and she patiently taught him the moves. By the time the game was over, she had a new friend.

Later in the morning, she spied the gardener, making her way through the flower beds.

“Can you join me for some grilled fruit?” Cypress asked. “I want to learn all the secrets of gardening!”

While they enjoyed brunch, Cypress told her of her plans to build a community garden and form a garden club.

“I have so much to learn, though!” Cypress said.

“I’ll be happy to share what I know,” said the gardener, “and, besides, learning is half the fun!”

Though this gardener clearly can’t be the one to help bring about the gen. 10 nooboo, she makes a good mentor, and every young gardener can use someone to share what she’s learned through years of experience.

“Have you learned to read the weather yet?” the gardener asked, and when Cypress confessed that there wasn’t much weather where she came from, the gardener offered to teach her all about the clouds and what they can tell about the jet stream, high and low pressure fronts, and other factors that matter to those who tend the earth. “So, that one indicates that the jet stream is north of us?”

“This is so much fun!” Cypress said. “Thank you so much!”

“No, thank you!” said the gardener. “I’m so happy to have found someone who shares my enthusiasm for strato cumulus cloud formations!”

It’s so much fun to meet someone who shares your enthusiasm!

The younger generation of park boys played on the pirate ship, and then, one by one, stepped off just in time to spin into teendom.

Each one is gloomy, and as I reflected on the natural match that goofballs provide for gloomy Sims (for goofballs can listen to the “sharing of gloomy thoughts” without losing their own buoyancy, and their natural playfulness shines through the gloomy Sim’s gray clouds), I started to wonder if Cypress would follow in her mom’s footsteps and wait for one of these boys to become a young adult before falling in love. 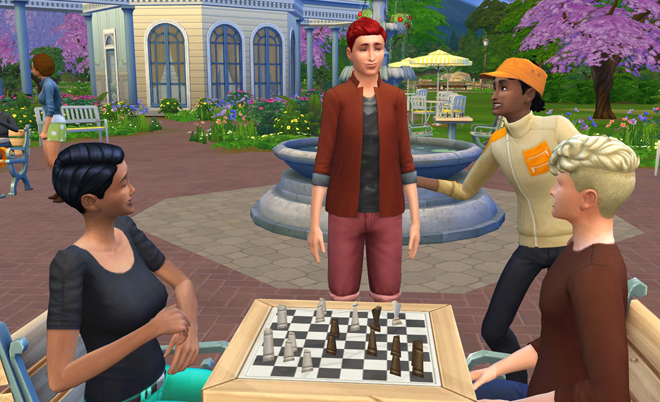 Come to think of it, two of the older park boys, Jade and Anderson, were also still teens, though Wade had already aged up. If we had to wait for friends to age up, I figured, we might as well take that vacation to Granite Falls that Cypress has been wanting, ever since reading the camping trip chapter in Dust to Dust.

And at Granite Falls, maybe we’ll discover that rangers are the new mailmen.

The first ranger we met had potential as an outdoor-loving friend, though she couldn’t help to sire gen 10. And later that night, Sugar met another ranger that offered more potential for closing out the legacy. Sugar was happy to introduce him to Cypress. 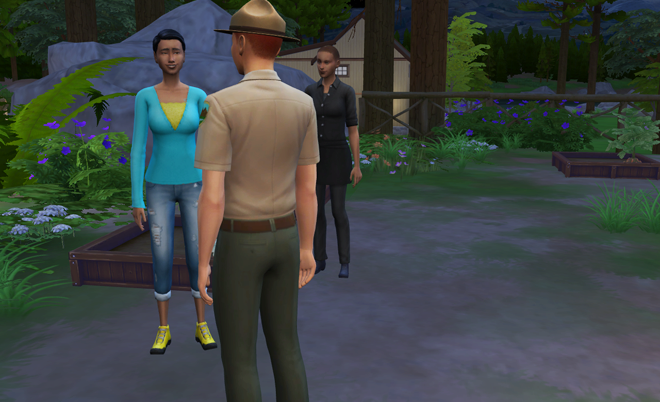 He’s gloomy, too, and they hit it off well, sharing stories about squirrels, hummingbirds, and dragonflies.

But Grim’s first visit cut their vacation short, then when the family got home and began to recover from the shock and grief of Grim’s second visit, Cypress discovered that Anderson and Jade had aged up.

Jade, the materialistic geek, gained loner as his adult trait. 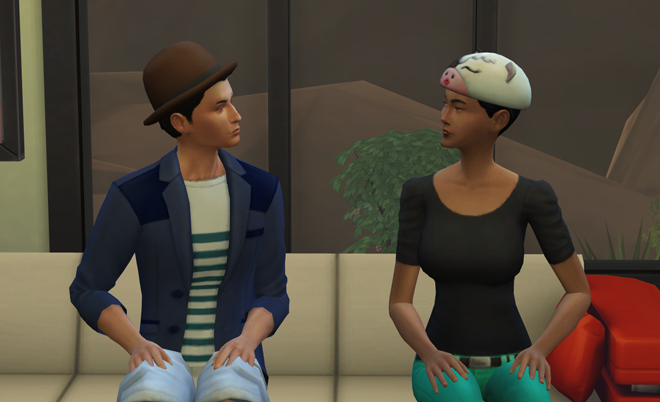 They’re best friends–could they be BFFs with benefits?

Cypress took a steamy shower, borrowed Mom’s flirty hat, and went upstairs with Jade to see if the sitting nook in her mom and dad’s bedroom, full of flirty decor, might help them discover potential for romance.

They both felt the mood.

“So do you wish you were alone now?”

Just not specifically for each other.

Sugar, who really is the one in charge here, not me, joined them.

And Cypress seized the opportunity to head outside. 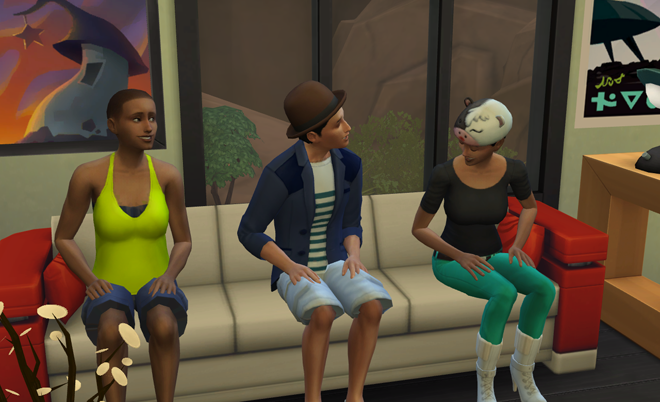 When Sugar followed to ask Cypress what flavor of ice cream she wanted, Jade sat alone, contemplating the position he wanted to fill in the family. At the moment, friend-of-the-family felt like a time-honored role that he was ready to assume.

“If I’m the Park Boy Friend, I can come over every day and still get plenty of time alone.”

Cypress realized it was just too soon for her to pursue romantic relationships. She was still deeply grieving Uncle Alder, her first best friend.

“My heart just hurts too much.”

It’s hard to think about moving on yourself when such a big part of you has moved on without you. “This is where we sat when I did my homework.”

Redbud let Cypress sleep in her bed that night. She wished there were something she could do to ease her daughter’s pain, and all the while, her own heart was broken for her twin who chose to let time move through him the natural way, rather than stay young like she had.

“Go ahead and cry. We’ll feel better some day.”

J.P., who knows that we can let grief pull us apart or use it to bring us together, found his mom and assured her that she wasn’t alone, no matter how lonely she felt.

The next morning, Cypress had another visitor. He said they’d met at Granite Falls, but she couldn’t quite place him, until he growled.

Oh! He’d been in the bear costume when they met!

Maybe bears are the new mailmen.

He’s a gloomy goofball who loves the outdoors. You’d think that, sharing two traits with her, he and Cypress would be very compatible. But they’re so similar that they’re actually a little combative.

“That joke is funnier when I tell it.”

As soon as Andy the Bear left, the ranger stopped by, coming down here all the way from the mountains.

“What did you say your name was again?” Cypress asked. She always thought of him as Mr. Ranger Guy.

“I like the way you look without your ranger hat. Kinda hip.”

He’s a gloomy glutton who loves the outdoors.

“You know,” said Cypress, “I come from a family of gluttons! And I hear we’ve had a streak of melancholy run through our ancestors, too!”

“Is that right?” Knox said. “I’ve always held that any family worth its salt had both the zest for life and the good sense to know that every silver lining’s got a cloud attached to it!”

I don’t know if it was something about him being a ranger, or the effects of Redbud’s borrowed hat, or all those ice buckets of champagne stashed up there, but Cypress complimented Knox on his appearance a few times, and by the time he left, a little line of pink had sparked up in their relationship meter. 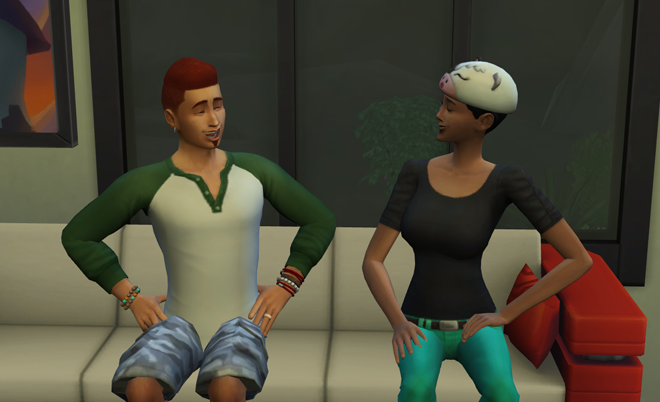 “Why, thank you! I’ve always held that a man can never wear too many accessories!”

On her stroll the next morning, Cypress ran into Andy the Bear again, who just happened to be pacing up and down her street.

“Are you in town for a bear conference or something?” she asked.

“You’re kinda cute when you growl,” she replied.

And a few sparks of pink flew up into their relationship bar, too. “Just trying to remember what you look like as a bear.”

But before they had a chance to share another flirt, the new mailman wandered over to introduce himself.

Andy couldn’t resist blowing her a kiss, but how awkward! Not while the mailman is there! And the pink in their relationship bar withered to red.

“I’ve always thought it must be awesome to be a mailman,” said Cypress. “You’re outside, you get to hear bird songs and watch for hawks riding the thermals…”

“And meet pretty young girls along the route,” said the mailman. 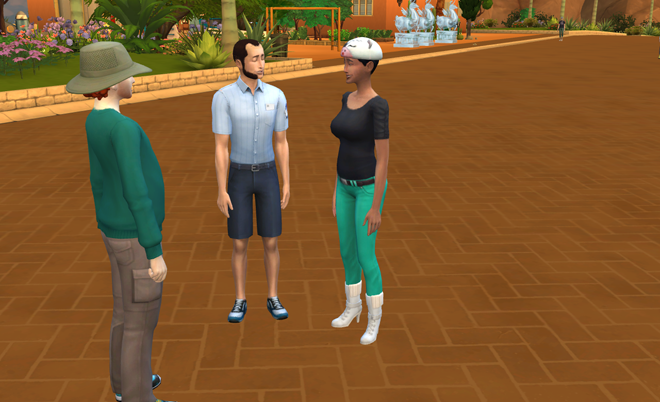