I decided that, if I was going to be serious about becoming a performing artist, I needed a new look. My innocent girl-next-door style just wasn’t going to cut it. I was tired of feeling naive and being talked to like I was twelve years old. I needed a look that’s more serious, more hip, and a lot more tough.

I thought I did pretty well.

“What do you think of my tough, street-smart new look?” I asked Emma.

She laughed in my face.

“Oh! You were serious!” she said, still giggling. “Well, it looks to me like you traded in the Volvo station wagon for a Mercedes two-door!”

“Not a Corvette? Or a Mustang?” I asked, feeling hopeful.

She chuckled. “Not quite. You look elegant, not tough.”

If only they knew how I felt on the inside. I feel like the daughter of a Marine who’s decided on her mission, which is exactly what I am. Nothing’s gonna stand in my way.

I’ve got callouses on the fingers of my left hand from playing guitar and violin that are tougher than any callous you’d find on the finger of any carpenter. I’ve got gymnast callouses. Now that’s tough!

“Do you think I look tough?” I asked Nathan.

“You ever see a little duck just hatched out of one of those speckled eggs?” He asked back. “Do you think they look tough?” And he just cracked up.

“It’s just that I’ve been reading about what it takes to succeed as a professional musician!” I said, fighting back my feelings of defensiveness.

He laughed. “I’m a Wonder Child! I grew up on that study!”

As we talked, I started to relax a bit.

“Look,” Nathan said, “You don’t have to look the part. Grit’s not something that shows up mostly on the outside. It’s in here.” And he tapped his chest.

“I think it’s cool that you look really beautiful,” he said as I was heading out the door. “Grit is the new sexy.”

I didn’t really have time to hear that.

I wanted to be on-time for my practice session with our dean.

Turns out that she is an accomplished violinist herself, and she’s offered to mentor me!

“Now I usually don’t do this for students in the residence hall,” she said. “But I’ve been watching you, and I think you’ve got what it takes.”

She worked with me on my bow angle. It’s not that simple, but it’s something that I can feel. When I get the bow just right, it feels steady and taut, like a fishing line, right as the trout is starting to run with it.

“You need to work on your intonation,” she told me, “and to do that, you need to be able to hear when you’re in pitch.”

She sent me inside to the piano, which she keeps in tune. My task: hear a note in perfect pitch, then sing it, then play it. 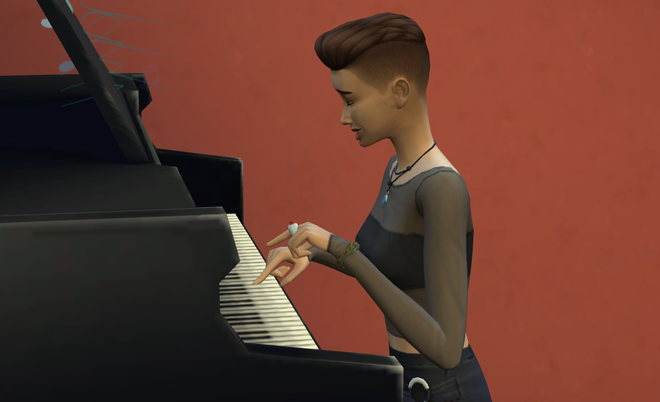 I can get 440 A every time. Next step: C. Then, keep going until I can hear, sing, and reproduce on my fiddle every single note, even the half-tones. Even quarter-tones. Even those funny slides that you can get as you transition from one tone into another, which is pretty much exactly what I’m doing right now, sliding from one tone that’s not quite in tune into another that will be in perfect pitch.