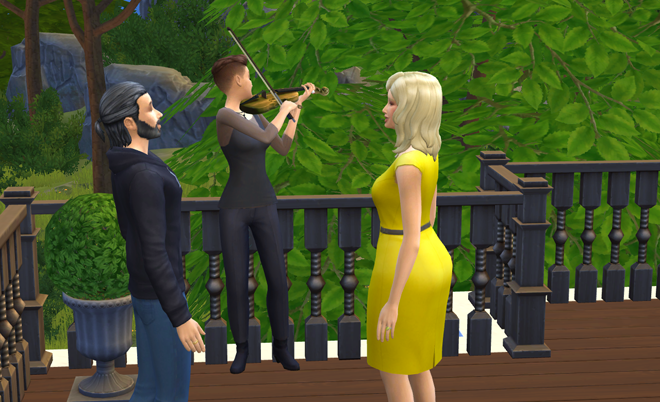 Mom and Dad are here! They arrived a day early.

“Listen to you play like a virtuoso,” Dad said, when he found me practicing up on the deck.

“More time with you!” she continued when we headed downstairs so I could dish up supper. “Plus, it’s like a second honeymoon for us, right, Bear? We’ve always wanted to come to Windenburg!”

I’d forgotten what my parents were like, always hanging on each other like a couple of teenagers!

Max joined us at the table, and he didn’t seem to mind my parents’ constant flirting. Since his own mom left when he was just a little kid, he’s probably never been around parents like mine, I realized.

“But your beautiful hair!” said Mom. “I mean, you look very fashionable, I’m sure, very avant garde, but don’t you want a look that’s a little softer? More feminine?” 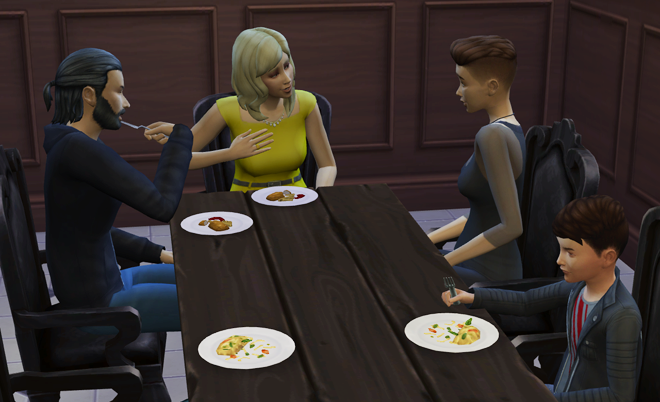 “Oh, I forgot to tell you,” Mom giggled. “Before we left, Princess said to tell you, ‘rawr-rar-rar,’ which translates to, ‘Come visit real soon, Honey-paw!'”

That’s Mom, always deflecting any potential conflict or disagreement with a joke or a reference to Princess! I can’t tell you how many declarations of teenage rebellion she staved off by chanelling Princess, our faithful golden lab!

While I was washing the dishes, Mom and Dad disappeared for a while.

“Where are your parents?” asked Max. “I want to say goodnight to them before you read me a story!”

I followed the sound of banging of closet doors as it echoed through the house, until it led me to Mom and Dad, emerging from the wardrobe like a couple of newlyweds. 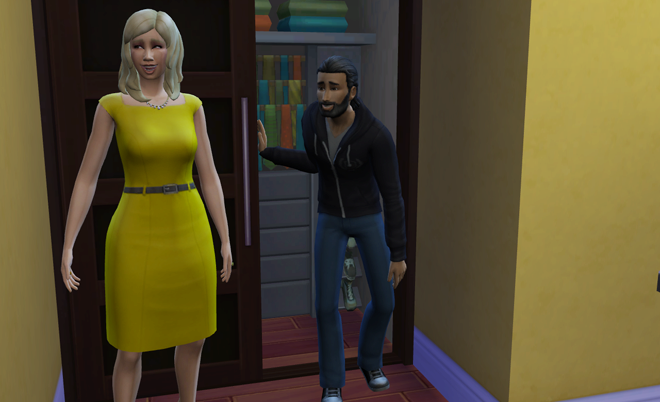 It would be more embarrassing if they hadn’t been like this forever. It was only once I moved out and got to know more people that I learned that this isn’t normal parental behavior!

Next morning, I headed over to see them at their rental cottage across the bay.

“Hey, there’s my girl!” Dad said. “Your mom’s still getting the house up. She wants to surprise you with the decorations. Sit out here with me for a bit, and we’ll give her a little more time to finish up.”

It felt so good to sit out there with Dad. It was like no time had passed at all–just like we’d been sitting together yesterday.

“Tell me what you’re learning,” Dad said, “only leave out the hard parts.”

“Just recently, I’ve been learning about how music works as a structure–like a container–for something else! Call it energy. Or beauty. Or maybe even spirit.”

I told Dad about the conversation I’d had the other day with Darin, my new best friend, the gardener.

I saw Dad’s eyes light up when I started talking about what Darin said about the part of the plant that we can’t see–the essence–and how it fills up the structure of the plant and makes it alive.

“I get that,” he said. “That’s what brings me to gardening. That and growing stuff we can pick so your mom can cook  it up for supper! Nothing like an ear of corn right off the stalk! So that’s what music’s like?”

“It is! It’s this structure of notes and rhythms, but it’s really just a container for what can’t be seen–for essence!”

I headed inside so Mom could show me the decorations. There were presents everywhere! 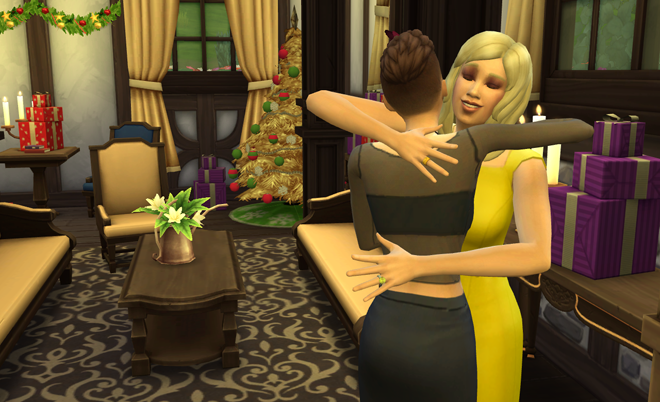 “So tell me all about college,” Mom said. “Have you met anyone interesting?”

I told her about my maestro who wants me to befriend the world and my new friend Darin who finds connection in everything. 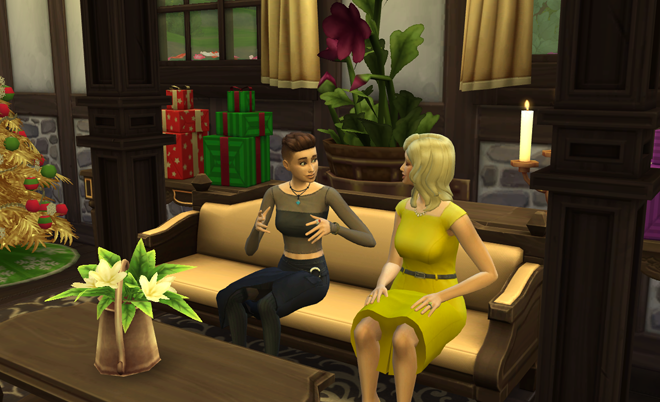 “Those sound like really neat people, Honey,” Mom said. “And I’m really glad that you have a chance to meet some diversity. But you know that’s not what I’m asking about. What about boyfriend material?” 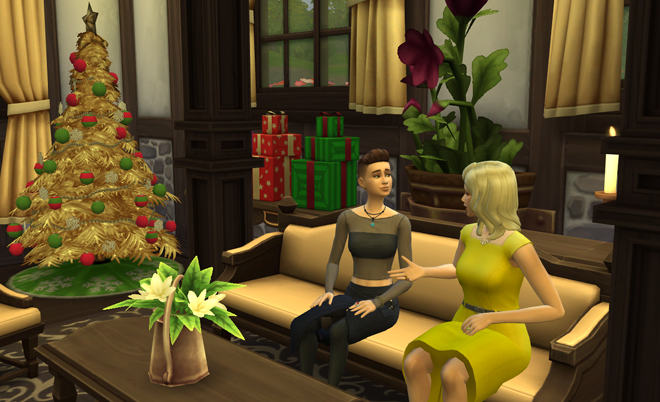 “Mom! Weren’t you the one who told me that college isn’t about meeting boys?”

“Sure,” she said, “but that was just freshman year advice! I just didn’t want you to meet somebody right away, drop out, and disappoint your dad. But he’s so proud of you now that he can’t be beat! So it’s ok if you meet somebody now.”

“How’s breakfast coming?” Dad called, and Mom headed into the kitchen to scramble eggs. I was thankful for a moment to sit, relax, and remember myself.

“What about that friend of yours?” Dad asked over breakfast. “Think I could meet him?” 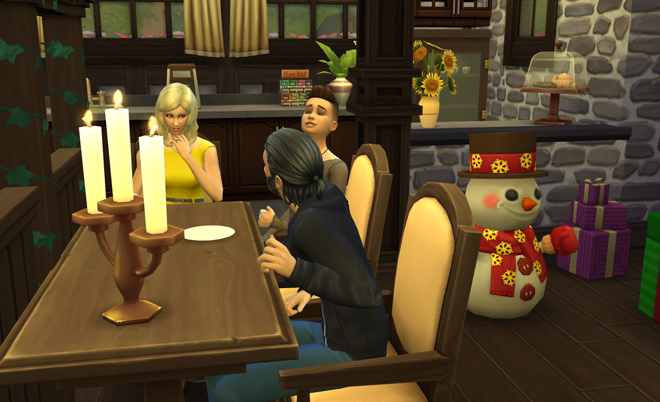 I called up Darin, and he said he could drop by. He’d done the landscaping for this cottage, and he loved any occasion to see it.

Dad wandered off, leaving me and Mom at the table alone.

“I’m glad your dad brought up that subject,” Mom said. “This is the gardener fellow, right?”

“Uh-huh,” said Mom. “The same one you were telling me about a little while ago? Don’t sell yourself short, Honey Bun. Don’t settle.”

“It’s not like that, Mom,” I replied. “Or if it is, it’s too early for me to know. I like him, ok? He’s a great guy. And besides, a person’s worth isn’t measured by what he does. But anyway, we just met and formed a connection. That’s all.”

When I start defending myself like I’m twelve again, that’s my signal that I’ve had enough Mom-time. 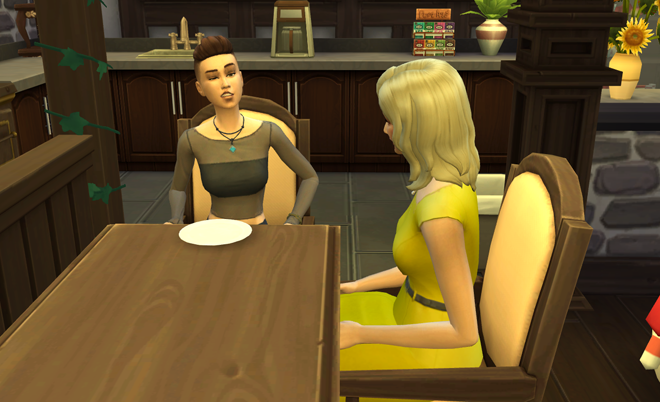 It was my old ploy, and I wasn’t proud of resorting to it. I’d sort of hoped I’d outgrown that trick. I’d hoped this time that Mom and I could just talk, like two people, the way I used to talk with our dean at Casus Dulces. No big drama. No prying. No secret unspoken questions. Just two women, sharing.

When I got to the front porch, I saw Dad sitting with Darin.

Dad was launching into some story about when he and Mom first met and what it took to keep a relationship alive for twenty-two years, how to “hot it up,” as he said, and Darin was listening with a big grin on his face.

They aren’t alike, right? I mean, sure. They’re both romantics, and they both have beards and a little bit of a hippie-beatnik style. But after that, the similarities between my dad and Darin end.

I mean, Darin is my best friend. And best friends aren’t supposed to be clones of Dad , are they?