All the Boughs were there. Jaclyn came, and so did the members of Cypress’s garden club. Sharon Pope came–you’ll get a chance to know her better later on down the road. She shows up everywhere, all the time. She’s great friends with the Boughs, and her kids are beautiful. They’re in Jaclyn’s merry band. Here’s a picture of one of her daughters: 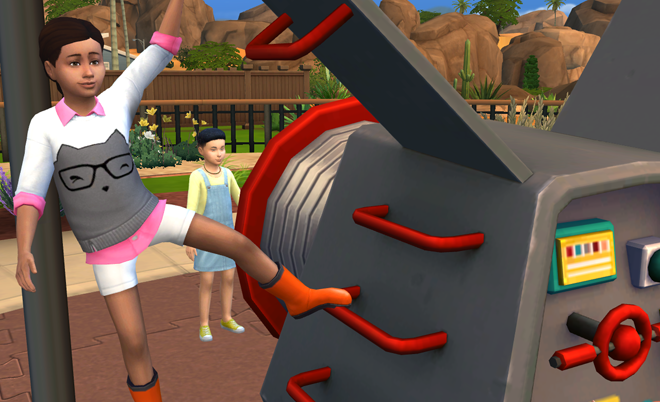 Sabreene came, and so did Eddie and Shannon SimsFan and her husband, John. JRose catered. Of course, Miss Penguin was the guest of honor. With all the Boughs, we couldn’t fit any one else in! We’ll have other parties for other friends.

Even Mesquite came to play the piano.

“Are you gonna make a wish and spin?” Cypress asked Miss Penguin. We all waited for her answer.

“No,” she giggled. “I like this age just fine! This is more an honorary birthday than an aging-up birthday!”

The day before had been Sabreene’s birthday, and I invited her over for tea.

“Banana slugs!” she said, when she arrived, referring not to the slug making its way through my flower beds at that moment, but to the mascot of our beloved alma mater.

“You really both graduated from the same college?” Cypress asked Sabreene over the roar of laughter and music.

“We did!” shouted Sabreene. “It’s such a wonderful school.”

I think the Boughs would love UC Santa Cruz, especially Cypress and J. P. Well, all of them really! The university has eight colleges within it, each with their own style, and so there’s one that would be sure to fit each of the Boughs.

This was the first time the whole family had been together since Sugar and Ren’s reception. Soon, they’ll gather again for J. P. and Floyd’s wedding or reception.

“Where is your other brother?” Nathanael asked J. P.

“You mean the man soon to be my husband?” J. P. responded. “More lover than brother,” he added, under his breath. “He stayed home. He’s looking through baking books, trying to find a good recipe for marzipan for the cake.”

onezero and Sugar took advantage of the party to catch up with each other. Since onez had joined ZenPines, J. P.’s wellness club, they’d been seeing each other more often, but onez was realizing that she missed seeing Sugar every day.

“I always go around looking for you,” onezero said.

“And do you find me?” asked Sugar.

“Yeah, I do,” said onez, and I think she’s right. Whomever I’m playing, if I take them to a community lot, first we see Sugar, and then, in the opposite direction, we see onez. They don’t often find themselves in an actual conversation, but these two have other means of communicating.

At the party, they kept each other laughing, while Miss Penguin and Shannon SimsFan danced in the crowded kitchen.

“I might need to get a bigger house if I keep throwing parties like this!” I said to Miss P.

“I don’t think you need to,” she replied. “Just look! We’re having a great time!” 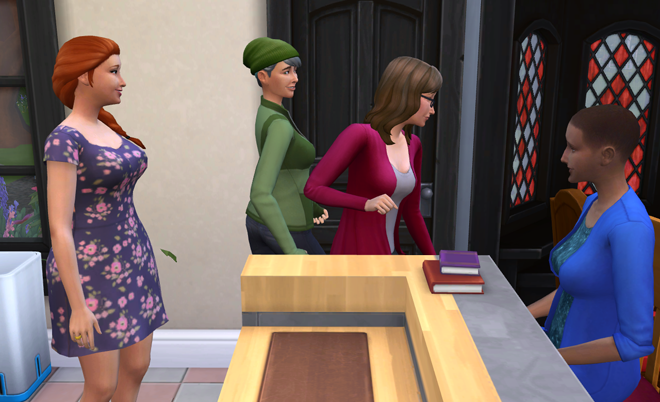 Cypress stayed behind after the party ended and everyone else went home. Since she and I share two traits–goofball and loves outdoors–we have become fast friends.

“I just want to thank you,” she said. “You made my dream come true.”

She spent the golden hour out at the easel.

“You recognize this, don’t you?” she asked, as she completed the painting.

It was one of Cedar Bough’s favorite subject matters: The magical owl.