I wrote the last three chapters because I wanted to explore the lives of some of the children that are in Jaclyn’s magical merry band.

Starting with Jennifer Harmonson was a natural choice, since she’s Squid’s best friend. When I went to play her family, I was so surprised to see that Jennifer was at Cradle Rock, and even more surprised to find her standing at the fridge with a big plate of breakfast scramble. She then, quite happily, marched to the back bedroom, where Redbud was sitting, and sat beside her. It was then when I noticed how much alike they look.

So that’s where her story came from. I remembered as a child sometimes when I’d find myself with a woman–maybe a friend’s mom, maybe a neighbor–with whom I felt a sense of the kindred: maybe we looked similar; maybe we both loved the outdoors; maybe we both just understood each other and fell into a natural sense of sympatico. When I saw how happy these two gluttons were with each other, I thought that maybe Jennifer would wonder if this was her true home and her true family. That would explain to her why she and Sempervirens became best friends so quickly, and it would explain to me why she was hanging out at Cradle Rock on her own.

Of course, she isn’t really related to the Boughs–that’s just her imagination. She is the daughter of Jayden Harmonson and Solomon Portillo; she is indeed the twin sister of Bridget. I was happy to see that Solomon was her dad. He was one of the Park Boys of Cypress’s childhood, and I’ve always had a soft spot for him. He and Jayden are soulmates, with completely full pink and green relationship bars. While I was playing the family, though, I received notification that Solomon married Christian Parker. There’s an MC Command Center complication for you!

No matter, I figured. He can still be a good dad to Jennifer and Bridget! Bridget has the insane trait, so maintaining close relationships is a challenge for her. Like many insane Sims, she will periodically yell at those she loves the most. Jennifer is very loving and patient with her: she takes her supportive role as a sister seriously. Jennifer and Bridget really do look alike: just give them similar hair, and they will look like twins.

I was curious to learn more about Christian Parker, the new wife of Jennifer and Bridget’s dad. I knew her as the mixologist with the two-toned braid, and I was surprised to see that she’s Mikaela’s mom. Mikaela is one of my favorites of Jaclyn’s merry band.

I adore the way she looks, and she is every bit as sweet. Like most slobs, she’s got a rambunctious enthusiasm for life.

I had assumed that Solomon was her dad, but when I played the Parker household, I discovered that Craig Cho (who is married to Alysia Carey) was her dad, and Solomon was her stepdad. That put Mikaela at the center of a very complicated family configuration. On top of all that, one of Alysia’s traits is jealous. When I first went to play this household, Solomon was visiting the Harmonsons, and Alysia was very tense about his absence.

I discovered, too, that Solomon hates children. His other traits aren’t bad: Loves the outdoors and loner. But because he hates children, he’s often tense when kids are around. Mikaela picks up on his tension, and then she feels tense, too.

It was interesting to see the sudden change that Mikaela went through as soon as she left the house and ran outside–she just felt free and happy, with all the complicated dynamics left behind! I found it a curious coincidence that Jayden Harmonson happened to be fishing near their house.

The bit at the park with Jaclyn happened when Mikaela wanted to send a happy text; I had her send one to Jaclyn, who then called her up to share an outing at the park. At the park, I was only playing Mikaela, so all the others who showed up were there on their own accord.

Poor Pierce! His and Mikaela’s dad, Craig Cho, is mean. Even when I tried to cancel actions from his queue, he still persisted in mean interactions with Pierce. There seemed to be no reason for the meanness: one moment he’d be hugging Pierce, and the next, yelling at him, while whimming to help Pierce with his homework. No wonder the little boy doesn’t believe in magic and does believe in dragons!

Pierce’s mom, Alysia Carey, is lovely: she’s an art lover, materialistic, and something else that I don’t remember, but which isn’t malevolent. And Craig Cho is crazy about her. 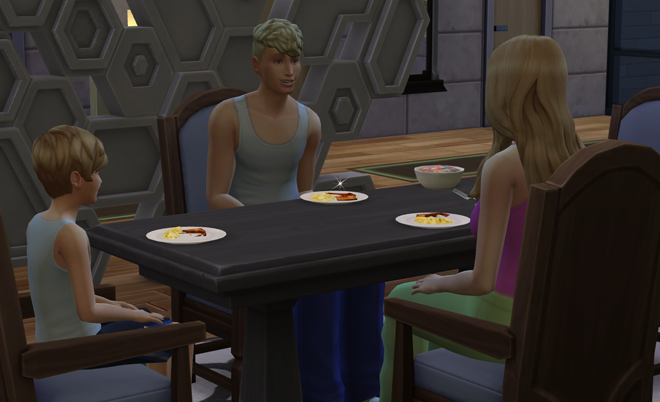 The kids, as kids do, seem to pick up on the tension. No wonder Jennifer feels that she belongs to the Bough family, which, though it has plenty of its own complications, is simple in comparison.

By the way, all this complication was created through the settings I’m using in MC Command Center. Blame it on the mod!