The pink cloud carried the intoxication of love. Who’s to know what’s true and what’s illusion when the fog of romance obscures the view?

Slowly, the fog settled, and Cathy found that she was very much in love.

But with whom? The object of her affections was obscured by the vapors of love. Love hardly needs a shape or form when it’s this strong–that it exists, that one can feel that heady spin, that rush of pulse, that skip of heart! That’s enough. 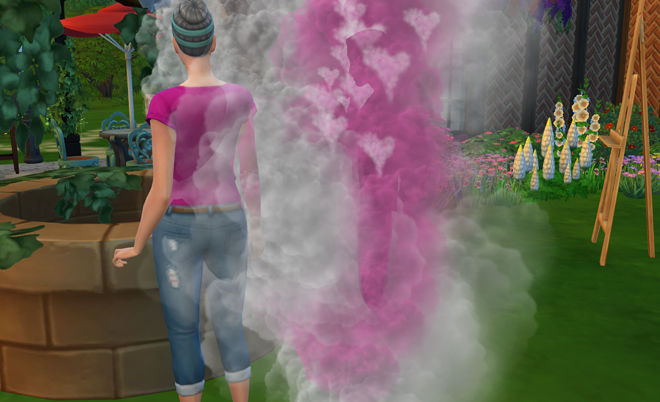 In the midst of sulfur and rose-water fumes, Brennan Stuckey found himself. Where was he? Who was he? Ah, that’s right! He was Brennan Stuckey, 38 years old, computer programmer, single. With a girlfriend. A girlfriend? As the fog evaporated, he recounted the facts that he knew about himself: He had a master’s degree in art history, though he worked as a software engineer; he’d been raised by an aunt with a harsh view of discipline in a Southern town; he had no family, to speak of, few friends, and he was the boyfriend of Cathy Tea.

Of course, none of this, except the last, was true.

The garden he found himself standing in smelled like mud and mulch, a place where he’d find creeping things. “What’s that over there?” he asked.

“No, on the ground. That wiggling thing.”

“Ugh. It’s wet. Slimy.” He shivered. “Do you think we could go inside, sweetness, where there are fewer germy things?”

“Is that a spider web?” he asked, looking in the corner of the bay window.

“Oh, yes,” replied Cathy. “A shamrock spider! I watched her spin her web yesterday! She helps to keep the fruit flies out of the kitchen!”

As they chatted and shared endearments, two things became clear to Cathy: first, Brennan seemed to believe every detail of his backstory. Cathy understood that it was all a fabrication that came part and parcel with his sudden manifestation into form, but he clearly believed in the aunt, the Southern town, the harsh discipline, the master’s degree, the programming job.

Next, it became overwhelmingly clear how poorly suited they were to each other. When Cathy mentioned the pollywogs in the pond, he flinched. “They’re disgusting!”

When she suggested they take a walk, he said it was more comfortable sitting inside. “My feet are tired, and this chair is comfy.”

When she began to describe how happy Sharon’s daughter had been to qualify for the spelling bee, he said, “Kids here are lucky. I was reading the other day about kids in this little village in Africa. There’s been a drought, so nobody can buy food. They’re starving. Everyone.” And he smiled, a genuine smile. He might have even wrung his hands.

She also realized, with a start, that though he was created out of rune, he was, in his views, nomdish through and through.

“You’re always talking about magic,” he said. “It’s so cute! Even when you talk about apples ripening. ‘It’s magic!’ It’s not. It’s chemistry. But how sweet that my girlfriend thinks it is magic.”

And yet, she loved him. She felt connected to him at a soul level. He answered her wish, somehow. Clearly, they were totally, completely unsuited for each other, and still, she loved him.

“No. No offense, but your couch isn’t very comfortable. I’ll call you.” And off he sauntered.

She had so much. She had her violin and her garden. She had Bach and Mozart.

She had plenty of friends who did call and whom she enjoyed spending time with.

She had afternoons at the bluff with Wade and members of ZenPines. She had suppers at Cradle Rock, sampling new recipes for veggie burgers.

She had long talks with Tomas about existence in the great beyond.

She had friends that were magic, each and every one.

Sugar Maple, whose mastery of instruments didn’t yet extend to the keyboard, asked her to mentor her on the piano, and though at first Sugar played with two fingers, she was very soon using all ten and playing actual music, with expression, of course.

When she looked up from the keyboard, Sugar motioned to the bar.

“Check out the new bartender,” she said. “More rune.”

“Are you sure?” Cathy asked.

“Do you think Jaclyn knows about her?” Cathy asked.

“Oh, I’m sure!” said Sugar. “She’s likely the reason she’s here. This one’s got dwarf and wood nymph ancestry, if you ask me.”

When days passed, and Brennan didn’t call and Cathy continued to forgot to think of him, she spent more and more time with Wade and her other friends. 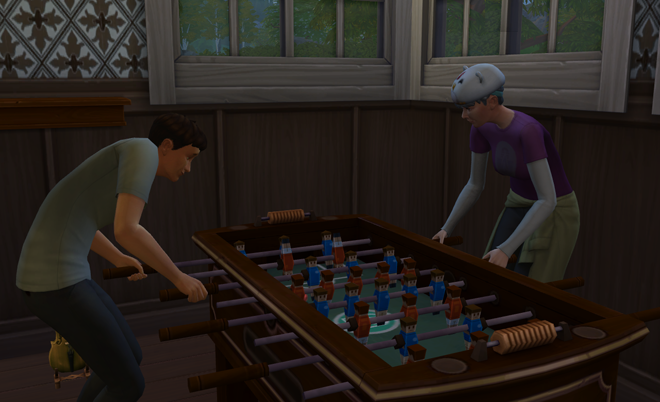 Somehow, it just felt right to spend time with the old family, the Boughs, and all their family friends.

She found it hard to miss a neglectful, incompatible boyfriend when onezero sought her out for her new best friend. In the garden, she realized that she had it all: music, a library, the sunshine, flowers, a puddle-pond full of pollywogs, rune for friends, and rune in the everyday matters of life.

She even had romance, in the form of a boyfriend who was made out of magic, though he didn’t believe in it; who was incompatible with her, though she felt a connection to him; who never called or dropped by and whom she never really wanted to see–though she loved him through and through. He was her soulmate. Even if he was nomdish, their love was rune.