Charlie came home from school wearing the craziest outfit. When he gets home, he has this thing he does: he stands at the entrance to our front yard, closes his eyes, and swings his arms.

I asked him once what he was doing.

“Getting home,” he said. I think he means that he’s letting go of all that happened at school so that he’s ready for the next thing.

So there he was, standing out front in his new pirate outfit that I have no idea where he got or what it means. 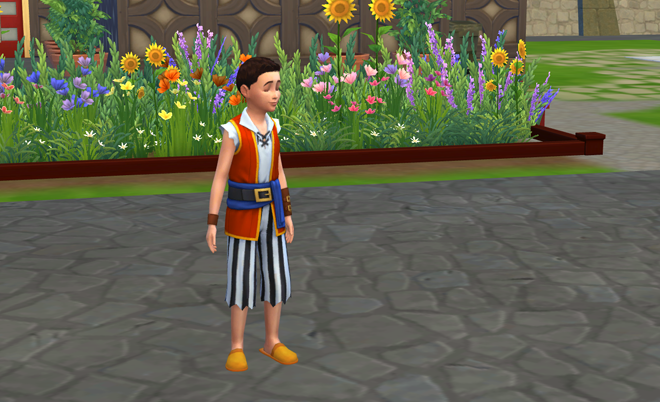 “I had a good day at school, Mae,” he told me when we sat down for supper.

“What was so good about it, Charlie?” I asked him.

“Three guesses,” he said. “What could be the best thing that could happen at school?” I thought about his crazy costume. “Are you in a play?”

“Um. Did your team win at kickball?”

“No. That’s two wrong guesses. You only get one more.”

He thought for a moment.

“Or you won’t have guessed what might be the single most importantest thing ever to happen to me at school.” “One more guess, huh? Ok. Did you do well in school today?” I ventured.

“Did you get your term grades?” “Bingo!” he said. “So that’s why I’m dressed up like a scurvy nave. All us A kids got to go through the big costume chest and choose. Maria chose a princess suit. Of course! And Samantha also chose a pirate outfit, like me. But mine’s the only one with the red vest. Hers is yellow.”

I chuckled. “That’s a crazy custom!” But I was happy. Some things at Charlie’s school they do right, and letting the kids choose their own costume after a success is right up there with the best traditions, I thought. “Can I go outside?” Charlie asked when we finished supper.

He left on his pirate costume and ran outdoors. After I washed up the dishes, I saw him lying on the ground with his little pony beside him, pointing at the purple and orange clouds of sunset. He was still out there when the moon rose, playing his fiddle like a boy on a pirate ship.

Oh! These magic moments! Savor, savor. Turn around twice, and he’ll be grown up.