AN: Orion Fuchs and his two mothers are a game-generated family. Their home was built by TheKalinotr0n.

Orion watched the globes of light: blue, violet, green, tan. One shimmered like a rainbow. The little globes shone brightest and bounced down the sidewalk. Did everyone see balls of light surrounding people? Orion would never know, for he hadn’t the words to translate what he saw. He could only see, smile, and wonder. And wasn’t that life, to watch in wonder as it spun itself around you?

Orion stood in the street and the songs of mockingbirds spun waves of blue and purple around him.

“Orion! Come eat!” called Love-Love. Orion felt a hand on his shoulder. It was his mother, who led him in to the kitchen.

Love, his other mother, sat with a bowl of beans that he had cooked himself that afternoon. He felt her watch him, and he giggled. 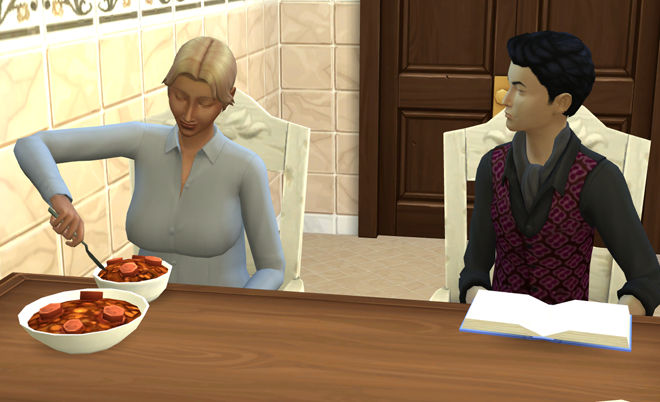 “Are you writing about popcorn?” Love asked.

“Peasants and laborers,” he said.

“Peasants and laborers?” she asked. “Oh! That’s right! Your History of Feudalism class! How is it going? Do you like the teacher? Is it interesting?”

Orion had enrolled in the community college. Classes there suited him. The academic load provided structure and focus, and being relieved of the social pressures of high school had helped to heal the ulcer that had begun to form last year.

“What’s your paper about?” she asked.

He looked at Love, wondering where to start–with his thesis, which was that baroque music replicated contemporary social structures through the form of counterpoint, thus reinforcing the belief in the providence of feudalism, or with his conclusion, which refuted his thesis by hinting at Bach’s secret, and largely undiscovered, subversion of social norms? His thoughts were slowly tracing their pathways to his tongue, when Love began to speak.

“You know,” she said, “I wrote my dissertation on feudalism in Northern Europe!”

After supper, they sat together in the living room, and Orion closed his eyes to better see the yellow swirls, green diamonds, and blue orbs spun by laughter and conversations.

Love-Love’s laugh spread gold light. She never poked with questions. She sat and listened, and when he couldn’t find the right word, she smiled without hurry.

At the piano, he told the story of his day: the colored lights that spun around each person, the flow of energy through a tree, the cadence of his history teacher’s voice, the click in place as his words found their way through his pen and onto the paper.

And what did they hear when they listened? Love-Love saw happy pictures of streams, jumping trout and swallows that dipped to the surface.

Love felt the emotions that her son’s music carried: happiness, curiosity, bliss. When Orion played, she found, for a moment, understanding: when he played with beauty, she set aside all worry.

Orion woke in the early morning, well before dawn. He had dreamed of the Bach partita. The blue line of the soprano voice danced with the green swirls of the alto. It was right–with Bach, it was all right.

The man, the one from earlier, was in the kitchen.

The man said nothing. Orion had made these beans himself. He cooked them on the grill.

“Did you eat a bowl of beans?” he asked the man.

“Yeah,” replied the man. “They were pretty good.”

“I cooked them!” said Orion. It was a conversation. 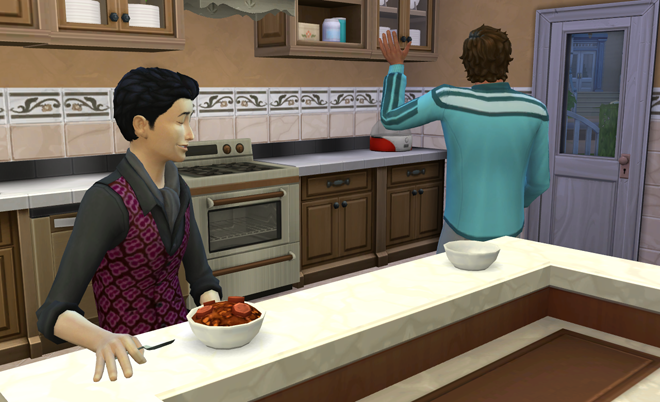 Green swirled below the blue, and the patterns danced together.

The empty bowl was filled with light–with energy! Nothing was empty. Everything filled with space, and everything had its place.

In the dream, the voices combined: they formed a single voice, yet each was unique. Blue, indigo, violet, and green dance together, and the pattern is complete. Everywhere he looked, Orion saw the completion of patterns. The pieces fit. Nothing was out of place.