Jaclyn’s been writing to me. In fact, I get a letter from her nearly every day. I’m not going to ask her to stop writing. I’m not going to reply directly to her letters, either. They’re just little things: “You looked so cute concentrating in class.” “Maybe we could study together–do you think?” “You should give me a shot.” I just smile, fold them up, and put them in the back of my sock drawer.

It’s not that I’m not interested. I’ve thought she was beautiful since the first time I saw her. And she’s got a style that draws me in. The thing is, even if Shannon and I don’t have the simplest or most straightforward of relationships, I kind of want to be true to her. My mom was true to Dante even beyond the grave–she was forever faithful. And growing up, I always admired that. I think it set up an expectation in me: I want that same thing.

The other night after class, Jaclyn walked across the quad towards me. I got the feeling she might make a move. 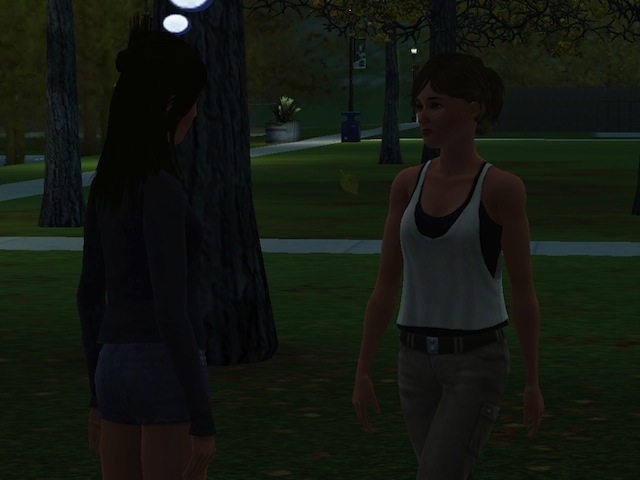 I was wondering how I’d respond if she did. I mean, I really like her, so I didn’t want to out-and-out reject her. At the same time, I was thinking of Shannon. Still, I thought, if Shannon has lost interest in me, it would be a shame to deny a chance to get to know Jaclyn on a different level.

But before Jaclyn had a chance to do more than say hello, a woman approached to ask me for an autograph.

I felt so relieved!

Saved by the fan!

And then, as soon as I handed her notebook back to her, I got a text from Shannon, inviting me to a party.

I was so excited–she wanted to see me! I told Jaclyn I’d catch her in class tomorrow, said goodbye to the fan, and dashed off to where I’d left my bike.

When I arrived at Shannon’s, she was talking to a young guy I’d never seen before. He didn’t look like he was from around here. Maybe he’s Swiss? He was wearing lederhosen. 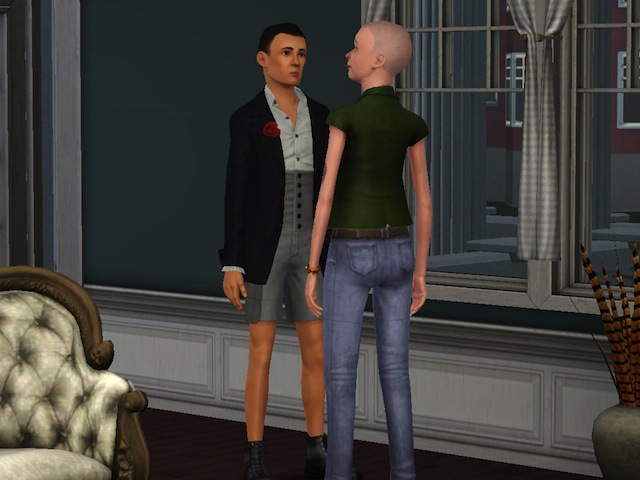 “Is your name Franz?” I asked him.

“This is Kristoffel,” Shannon said, and she chuckled under her breath. “He’s here for his Junior Year Abroad.”

Shannon was doing everything she could to keep from breaking out in laughter, and I was torn between trying to say the most ridiculous things I could think of, to see if I could get her to lose control, or to keep it together out of propriety.

My manners won out in the end.

Eventually, Kristoffel wandered into the kitchen in search of beer, and Shannon and I were alone.

She seemed actually glad to see me.

“I really thought I was going to lose it there,” she said. And we both laughed. 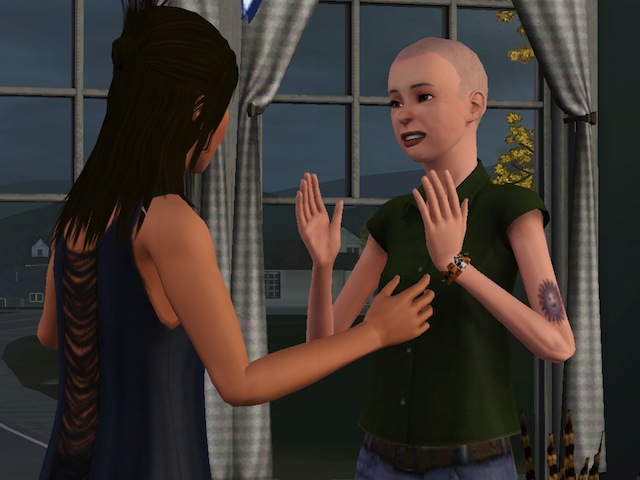 “I thought you didn’t want to see me,” I confessed. I told her everything: how I felt disappointed at our reunion, when she didn’t seem at all excited I was there. How I was hurt when she told me not to write anymore. How all the signs seemed to point to her not caring for me.

“Oh, crud,” she said. “It’s not like that at all. It’s just–Oh, man. I’m so bad at these things! I don’t know how to do this. I’ve never had something like this before. This is all so foreign to me. I’m sorry. I didn’t mean to hurt you.”

She explained that when she saw me the first time, it just felt natural to her–like this was where I belonged. So why make a big deal of it? And then, why write? When I’m here, and we can talk, why bother writing?

I really tried to see her perspective. I decided not to try to explain mine–at least not at this moment. You see, I was able at that moment to realize that her way of looking at things is so different from mine. She’s not a romantic. She doesn’t like flirting or big showy gestures. But that doesn’t mean she doesn’t feel love.

She told me I was the first person she’d ever loved in this way. I knew that. She was my first, too. But then she told me that that was different. I would have lots of others after her. She wouldn’t. This was it, for her.

“I’m so sorry I hurt you,” she said. “You gotta know that wasn’t what I meant. You’re such a part of my life that being with you is normal now. It’s not that I take you for granted. It’s that I’ve…” She searched for the right word. “… I’ve incorporated you.” 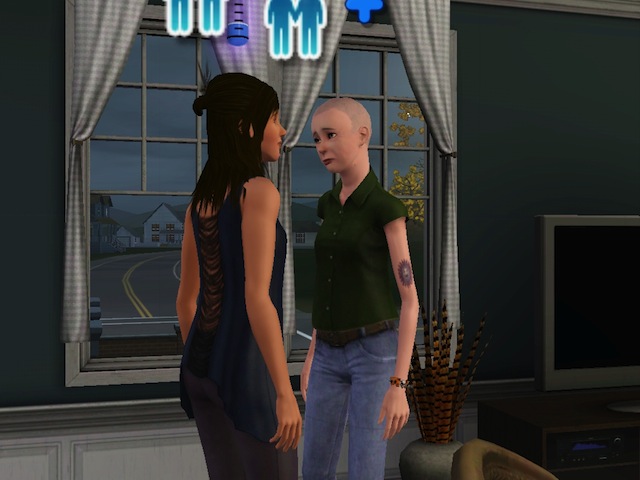 I didn’t really get what she meant. I still don’t exactly get it. But I definitely picked up that this meant something to her. It was significant.

Later that night, I was out skinny dipping in the moonlight, and Shannon came down to the pool.

“KaZAM!” she yelled. “Marigold Tea! You rock star, you! Light of my life! Everybody! Listen! Listen, you old Moon! I love this woman!”

She watched me while I finished swimming and put my clothes back on.

For the first time, I finally realized it. Shannon Arkers loves me, and I was a fool to have ever doubted her.