A bunch of days passed. I don’t know how many. I lost count.

I sort of forgot about everything except picking saguaro fruit, prickly pears, and cactus barrel fruit. I thought of catching crickets, too, and eating them for protein, but I decided not. One evening, I was playing my guitar, and I noticed that a cricket was chirping in tempo with me. I kept varying my speed, and the cricket kept matching it. When I’d stop, it would stop. I’d start, it would start. So I decided against eating crickets.

I picked mesquite pods and ground them with a rock onto another rock that I used for a mortar. Then I mixed the ground pods into a paste and dipped the grilled fruit and nopalitos in it. It was delicious.

At one point, I found that I had to roam further and further to get the fruit I needed.  It took all day of walking to find enough to eat.

I remembered how, when I camped here with my dad, we returned to the main lodge sometimes. They had a fridge there, and whenever there were events, like barbecues, people would store the leftovers in the fridge with a big sign, “Eat Me.” One day, Dad and me had been hiking all day. We were starving. When we checked the extras fridge, we found some steaks and corn on the cob. That was the best meal.

When I got to the lodge, I held my breath and closed my eyes as I opened the fridge. When I looked, there was a box of veggie burger patties. The expiration date was for December, and I knew it was still fall. They smelled fresh enough. I found a package of buns in the pantry, too.

While I grilled them, I thought about how stuff shows up when we need it. Not always. But sometimes. And when it does, it feels really, really good.

I took my meal inside. There was a gardener there, reading a joke book. I was confused. I hadn’t met him, I didn’t think. But I’d seen him around a few times.

“I overheard you telling some tourists you were studying the saguaros?”

I launched into telling him about what I’d observed on my treks. I was developing a theory about how higher elevation saguaros seemed to have greater chlorophyll.

Then he said, “You’re kinda young for a university student. What are you, fifteen?” “I was going to guess fourteen,” he said. “You look really young, if you don’t mind me saying so. But you’re so smart about plants, you seem a little older.”

He didn’t ask me anything about myself after that. Instead, he launched into a long story about his own background. He ran away when he was not much older than me. Abusive home. Alcoholic step-dad. He called it “that old story.”

He said he lived all over–in cities, in the mountains, on beaches.

“It was tough going,” he said, “but I learned a lot. I learned about myself and I learned about others. Picked up some good skills. Eventually, I got my GED, went to community college in horticulture, and now, here I am, working for the parks.”

I felt like he was trying to give me hope.

“I’ll look out for you,” he said, “while you stay here. You know you can’t stay forever. One thing about this life, you gotta move on, eventually. But while you stay, I won’t rat you out, and I’ll let you know if there’s anything you got to watch out for.”

I don’t know if I can trust him. I want to. He’s been where I am. And he’s got a really nice smile and his voice is warm. If I listen to my gut, it says, trust him. But my brain says he’s got rules to follow, as a government employee, which he is, working for the parks, and one of those rules probably says something about not letting people live at the park, while another one probably says something about reporting kids on their own to the authorities. 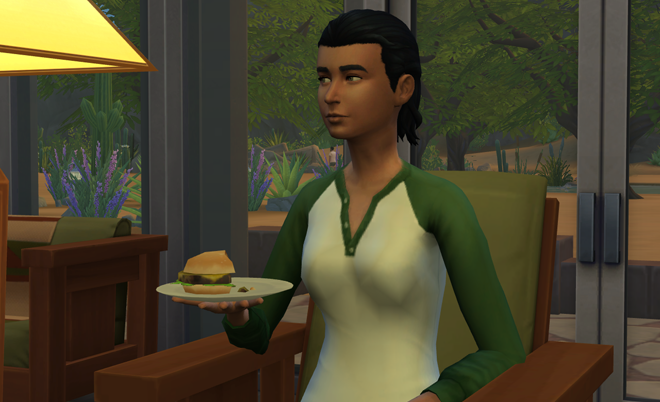 “I appreciate that,” I told him. I decided I wouldn’t completely trust him, but I would partway. So that’s what I’m doing.

For example, I didn’t tell him my name. I told him I was called Jazz. I wasn’t going to tell him where I was staying, but he knew already. He’d seen my camp when I was out walking.

I asked him about the campsite, about whose it was.

“So, I guess I can stay until it snows up north?” I asked. “Fine by me,” Deon said. That’s the gardener’s name. “Maybe longer. That fellow was getting pretty old, and for years now, we’ve been expecting a winter when he wouldn’t show.”

“How come you let him live here in the winter,” I asked, “instead of reporting him?”

“What good would reporting him do?” Deon said. “He’s not hurting anybody or anything. We kind of like looking out for him.”

“Me and the other gardeners.”

“You won’t tell them about me, will you?”

“Honey,” he said, “you can’t keep yourself a secret from them. You may have yourself convinced that nobody sees you, and sometimes, nobody will see you. But you got to learn that everywhere you go, there are people like me, who’ve been there, who will notice. Stop trying to hide, and you’ll have better luck blending in.”

I wondered if he was right. I mean, he’d been there.

So that day, I decided I’d spend the whole day there at the park center, not hiding. I played my guitar, right out in front of the lodge for everybody to hear.

And then at suppertime, I ate my meal with a family in the picnic area.

The dad and his daughter were on a vacation, just the two of them, driving through the Southwest gathering fossils.

When his daughter ran off to play on the space ship, I wondered if she had any idea how lucky she was.

When I was falling asleep, I felt really sad for some reason. My cricket was chirping, and the moon was out, and millions of stars were shining, and I’d made a friend that my gut told me I could trust.

But inside, I felt like a little girl, alone in the world.