Deon called me up and asked if I wanted to meet him at the lounge. It was Saturday, end of track season, and just a few weeks before the end of school. He invited some of our friends, too–Clara Bjergsen and Adriene. It was a type of celebration.

They serve food, so I was allowed in, even if I am a minor. I smiled, remembering when Deon showed me that place that served free tapas all those long years ago. Feels like another life.

It had been a pretty successful track season. I didn’t break the mile record, but I got to compete. I set a few track records, and I won a lot. I also lost a few times–or, rather, placed second or third. Once, even fourth. But I’ve qualified for States at the beginning of summer. And Tracy and the USM coach told me they’re proud and looking forward to next year.

I’m doing OK in my classes, too, if you consider all A’s OK. Which I do. I’m not graduating Valedictorian or Salutatorian. Nadja is the the valedictorian for her high school. She’s gonna deliver an awesome speech. She’s been practicing it on me.

I’m just gonna walk the aisle, take my diploma, move the tassel to the other side, and throw my cap up in the air.

It’s enough that a kid like me made it this far. I’ll be graduating high school. I ran track. I got accepted into college. I got a place lined up to live in San Myshuno, sharing that flat with the violinist, and I’ve even got money to pay my share of the rent, which isn’t much, because of the YOTO connection, but still, it’s something.

My days of free-loading are over.

At the lounge, when I took my guitar out to the courtyard, that really buff woman from the San Myshuno gym showed up.

Man. She’s so awesome. Her arms are sculpted. She wears a men’s hair-cut, like me, but then she wears all this buff jewelry and a long skirt and a little shirt that shows her incredible abs.

I can’t imagine myself ever having the confidence to dress like she does. But that’s OK. I like my style. 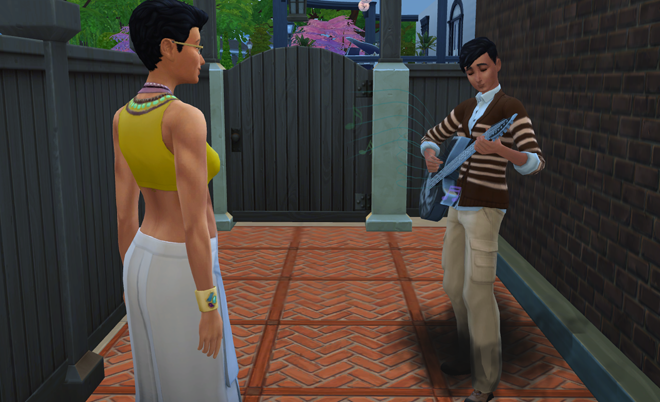 While I was playing, a bunch of other people came out to listen.

“This is Jenny Trevalyn,” she started telling them. “If you follow track, like I do, you’d know her. This girl is going places. She led the San Myshuno High team this year, and next year, she’ll be running with USM. Take my word for it. That’s the team to follow.”

I felt really shy and embarrassed.

But I also felt so proud.

I went inside, and Adriene was asking Clara about opportunities for older, nontraditional students at USM, and suddenly, it hit me. I’m Jenny Trevalyn. I’m gonna be a student at USM. I’m on the track team. I’ve got a life.

“How’s that protein drink?” the bartender asked me. “I heard you’re an athlete. You still in training?”

“It’s good,” I replied. “And yeah. I’m still in training. I gotta feeling I’ll always be in training.”