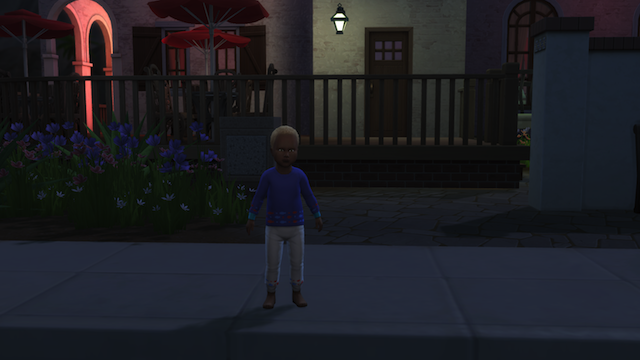 Eyes store power. Even babies know this. Watch them track the gaze of an adult. They understand it’s through our eyes we shoot energy, and they haven’t forgotten that energy is pure light.

Cathy returned from her conference with onezero’s one thousand mothers carrying the knowledge that her and Brennan’s son Rocket had come here for a reason. When worlds connect through rifts in oak and granite or lines forged from steel, sometimes an unexpected hero answers the call.

It would likely be years before he’d be pulled into action, this she understood, but nevertheless, it was time now to get him ready for what would come.

Cathy spent hours each day with him. While the twins formed their own universe of stories, jokes, and make-believe, Cathy taught Rocket to dance, sing, talk, count, name the birds, chase the crickets, and follow trails in the morning dew.

He required extra sleep each day to absorb all he was taking in.

While Rocket napped, Cathy spent time individually with Sparkroot or Florinda. Even then, the conversation often turned towards Rocket.

“Can you guess what he do, Ama?” Sparkroot asked.

“He Rocket. Know what he did? He climbed the tree.”

“Did you ask him what for?” Cathy asked.

Sparkroot took his big brother duties seriously. He read to Rocket from his homework book while Rocket slept, “so he’ll get a head start on history.”

One afternoon, when Cathy needed to take Sparkroot in to San Myshuno to pick out a new violin, Brennan offered to watch Florinda and Rocket.

“That would be great,” Cathy said. “Give you a chance to see your other kids.”

Brennan, who made no secret that Sparkroot was his favorite, spent little time with his daughter and youngest son.

He didn’t tell Cathy he’d be taking his children to the Rattlesnake Lounge for Guys’ Night Out.

She got the story from Florinda the next day.

“We had a blast, Ama!” Florinda said. “There was this guy with no face in the monk’s robe. And Jade was there! He’s got a cool hat. Do you think Rocket should get a hat like that?”

“He could if he wanted,” Cathy said. “So what did you do there?”

“And did they like your jokes?” Cathy asked her daughter.

“Oh, sure. I told the one about ‘How did the vampire die? He accidentally ordered stake and eggs for breakfast!'”

“Well, Jade thought it was stupid. ‘They don’t die by eating,’ he said. Then the no-face guy said the undead can’t become dead but they can become nothing, and J.P. said nothing is worse than death.”

“Then, I asked the no-face guy how someone becomes undead, and he said, it wasn’t really the kind of question a little girl should be asking, but if I wanted to check back with him in ten years, he’d be glad to explain.”

“And where was your ada during all this?” Cathy asked.

“Oh, he was at the bar, laughing with guys,” Florinda answered.

“And where was Rocket all this time?”

“Oh, I didn’t see him when No-Face and I were talking. I think maybe he was outside running around. But No-Face told me something interesting. He said my little brother was the one who understood better about undead, dead, and nothing than anybody. And if I really wanted to know, I could ask him, once he learned how to talk. But when I asked him how he knew my little brother, he wouldn’t answer. He said some mysteries best stay mysterious. What do you think, Ama?” 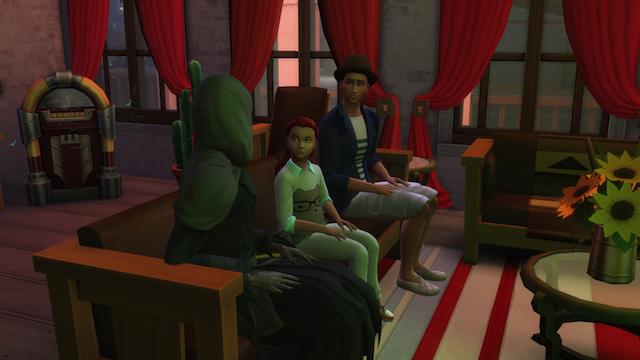 “I think I should call your ada and have a word or two. I’m not sure about Rocket running around unsupervised.”

“But he wasn’t unsupered all the time!” Florinda said. “He came inside and said, ‘Aba too kay’ to Ada, and Ada understood and got him milk in a sippy cup!” 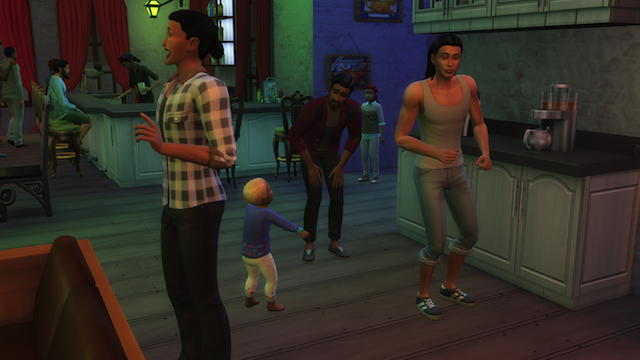 “Then Rocket came and sat by me and Anderson–you know him, right? He’s a friend of Little Green’s mom from way back.”

“Sure, Anderson, Wade, and Jade were the park boys,” Cathy said. “And did Rocket behave?”

“Oh, yeah! He told us a story about something. I could only understand ‘Quacker doo-doo’ and ‘puffer stuffy.'”

“It must have been a troll story,” Cathy said.

“Yeah, that’s what I figure,” said Flor. “So Ada came with his coffee and I told the story about the troll under the bridge, and everybody loved it!”

“Did you have fun, though, Flor? It sounds like kind of a weird evening.”

“Oh, Ama!” replied Flor. “I had so much fun! I never had funner! And Rocket had fun, too, even though he was outside running around half the time. I told Ada that I want me and Rocket to come to every Guys’ Night Out, and next time, you and Sparkie can come, too, and we can have the Stuckey-Tea Family Night at Guys’ Night!”

“Well, that could be our new tradition, I suppose,” Cathy said.

“And maybe No-Face and J.P. will be there,” said Flor, “and all the guys. And it’ll be just as great as it was last night.” 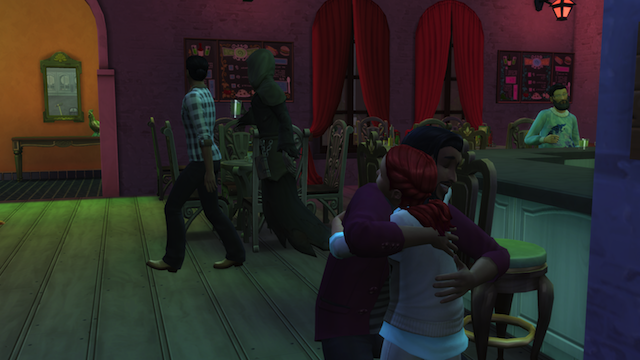