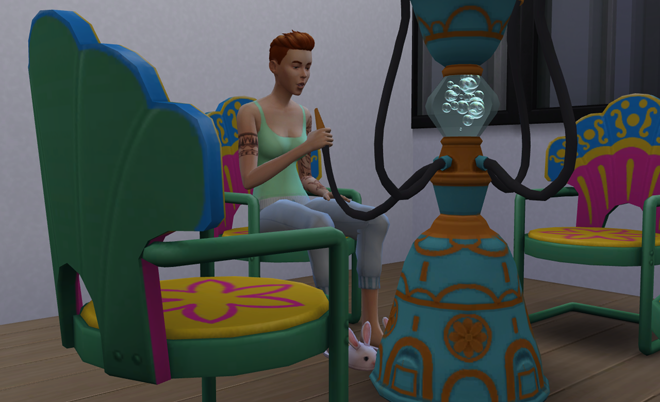 I had a lot to think about in the early days. I wondered about wish-fulfillment: I would desire something, a bubble-blower, for example. I’d hear a few clicks, and then never-used items (mirrors, extra chairs, end tables, and lamps) would disappear. Life would freeze for an instant, and when the freeze thawed, the object I desired waited somewhere in my apartment. I hadn’t mastered manifestation: Sometimes it worked, more often not. Sometimes, even the wish itself disappeared with a click.

I encountered Death within the first week. As luck would have it, I was in a bar, ordering my first drink, when it happened.

Spontaneously combusted is more accurate. She collapsed a mere few feet from the entrance to the bar. It was too late for help.

I sipped my Dim and Gusty. Music played.We waited. And we experienced the first glitch this world had seen. I didn’t realize it was a glitch. It felt rather like the frozen pause during manifestation. Except not all was frozen. Time still ticked. We could talk. I could drink my Dim and Gusty. But Grim was stuck, and I couldn’t leave the lot. Death was in progress.

We waited suspended. I finished my drink.

A series of rapid clicks, and the sombre chord sounded again. Grim materialized before Lilith’s urn and wept. 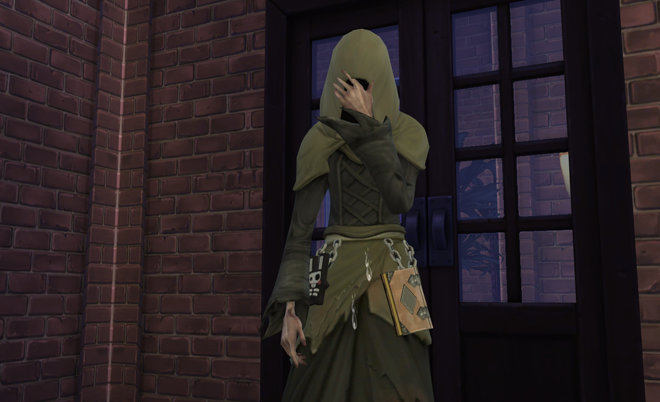 “Damn,” he said. “Be right back. There’s her brother. Wasn’t expecting a two-fer. This really sucks.”

Sure enough, just as the sun set, Caleb Vatore collapsed a few yards away, right before our eyes. Grim refused. “Can’t be done.” He wasn’t angry, only resigned to his task. 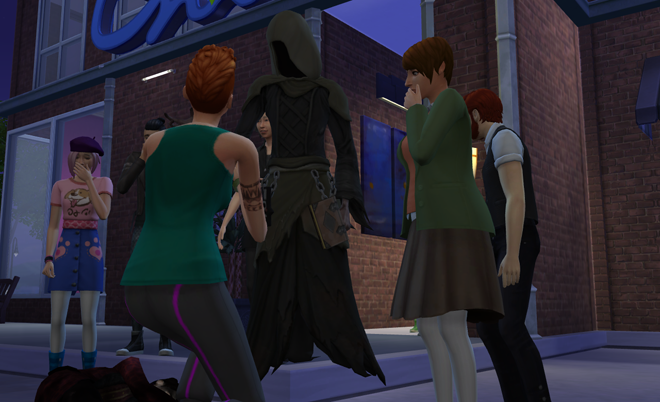 We gathered in a circle, all the Sims I’d met that day, and we wept. Some cried for a sister and brother departing within minutes of each other. Some cried for unspent youth. Some cried from dread. I wept at irony–so close to shelter from the sun, yet so far.

“Oh, hi, everyone!” said the bartender, joining our circle too late to be a witness. “Drinks on the house!”

Grim and I remained outside while the others filed in. He wept before Caleb’s urn.

“It’s not your fault,” I told him. “You were just doing your job. It was just a tragic mistake, or something.”

At the time, I felt even sadder to see Grim’s tears. I realize now that this was his first reaping, too. The first time has to be hard, especially when it’s siblings, and it seems so needless.

“I’ll be OK,” he said, as his tears continued to fall.

“If anything,” I said, “it was my fault. If I hadn’t come here, they wouldn’t have showed up, right? They’d still be safe and sound wherever they were before they popped up here.”

“Don’t be so sure,” he said. “Even when you stay inside your apartment, others materialize on the sidewalks, in the square. You can’t stop it. With your arrival, we get life, and with life, we get me, part and parcel.”

Grim left with smoke. I felt too sad for company. I headed home.

That night, I opened my blog and wrote. Here’s an excerpt from my entry from that day:

I learned Death’s name today, and he learned mine.

I thought that witnessing death would make me sad. And it did. But what made me sadder was seeing Death’s tears. I felt better after writing.

The next morning, Salim dropped by as I was finishing up breakfast. I told him what had happened. “I have never seen a dead body,” he said.

“These ones had bat-tops,” I said “Little cast-iron carvings of bats on the top? Kinda cute, if it wasn’t so sad.”

“But the undead cannot die!” he exclaimed. “It is an impossibility!”

Pondering the death of the undead led us through the esoteric.

“What do you think happens when a person dies?” I asked Salim. “Do you think they end up back in the Blue-Green Density?”

“You know. Where we all started.”

He didn’t know what I was talking about. I described the blue of the sky and the green of the ocean and the merging in light. I talked about the single point in space and the timelessness and the complete absence of wish or desire that can only be called bliss.

He looked at me like I’d been smoking bubbles.

“I have no memory of this place,” he said.

“No, no,” I insisted. “You must! Before you came here. What’s your earliest memory?”

“You mean your grandma’s fruit cake? When she used to make it for you?”

“Not that,” he said. He squinted his eyes, looking back into the past. “When I stood in the hallway, right before we met, and held the plate of fruitcake in my right hand while I knocked on the door with my left.”

“That is your very first memory?” I asked.

When I thought about it later, I explained it to myself by figuring that he must have experienced traumatic memory loss. I could understand that. The experience in the Blue-Green Density, without time, or space, or desire, is so close to paradise–such total, complete oneness. Leaving that and finding oneself here in a world that makes even Death cry, that would be trauma enough to block the sweetest of memories. My theory brought me a sense of gratitude. I would do everything I could to keep my memory intact. Little did I realize then that the memory of that bliss was mine alone.