I spent so much time alone when I was young that whenever the opportunity arose to be with others, I took it.

It’s not that I don’t spend time alone now: I do, lots of it. I simply find I need less time with others.

At any rate, that’s how I found myself out at the bluffs on the Isle of Windenburg one Sunday afternoon. Salim said, “There’s a party. Let’s go!”

And off we went!

The mixologist arrived at the same time we did. 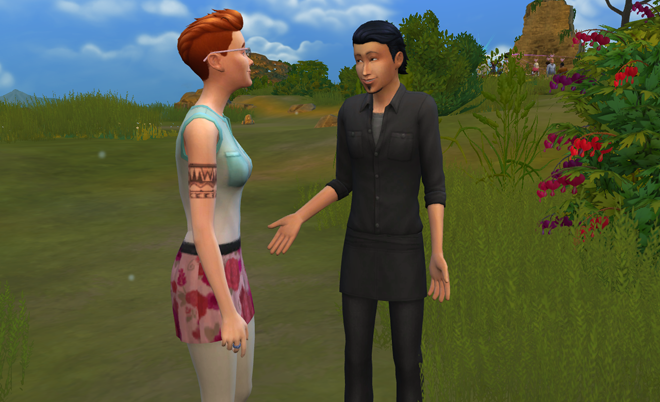 “You been here before?” he asked.

“Awesome! Did you come from the Blue-Green?” 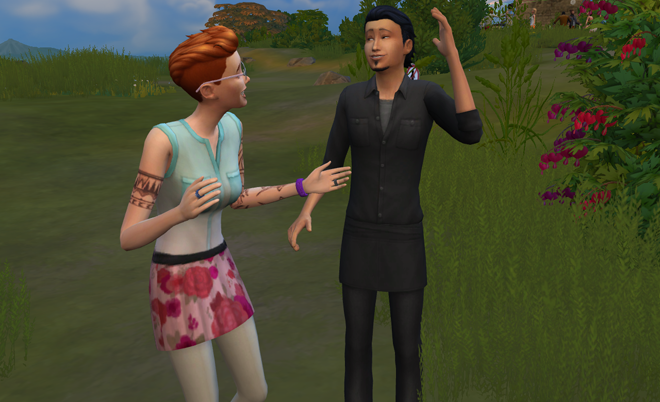 Well, he was open to talking about almost anything. Of course his memory started with stepping onto that grassy meadow at the entrance to the bluffs, so my question about the Blue-Green Density was met with incomprehension that led to awkwardness.

At the time, I was still unfazed in my pursuit of someone whose memory which matched mine.

He headed off to the portable bar. I followed him to the dance area, where Salim was striking up a conversation with Nancy. Now that I recall, the DJ, the mixologist, and I were the only ones there who weren’t premades. But back then, I hadn’t yet begun to make these distinctions.

I did notice, though, that one of these Sims was not like the others. 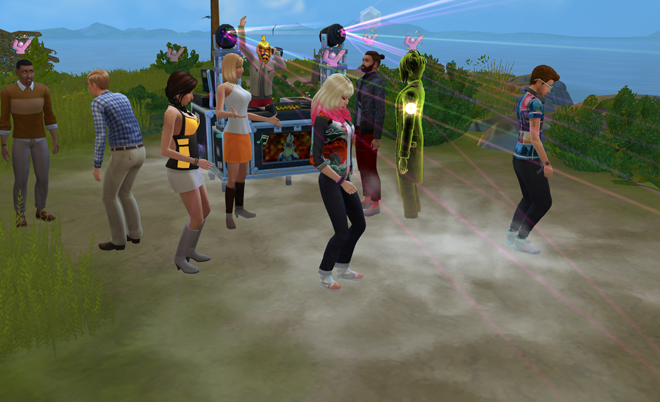 Caleb was there. Caleb Vatore. The same Caleb I’d watched being reaped the week before.

He wasn’t the same. I could see through him, and a bright light shone in his chest. 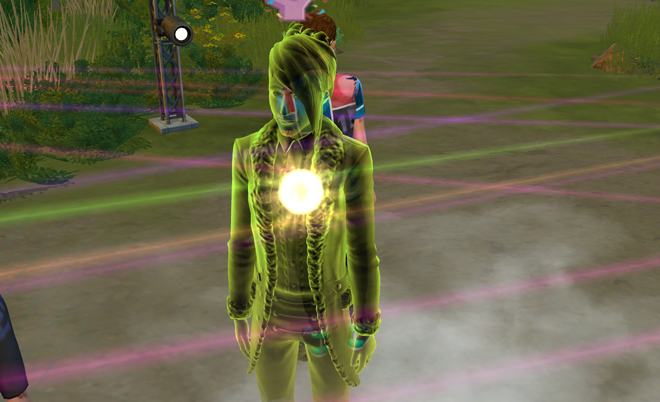 We all danced until sunset, and then I had needs.

When Salim and I got back to our flats, my key-holding buddies dropped by.

They joined me at the table while I ate, and I told them about Caleb.

One of my friends said, “I’ve heard about this. They’re called ghosts.” 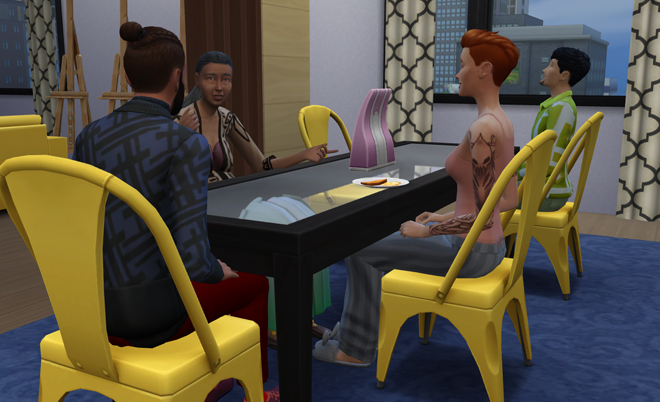 “But what does that mean? How are they different?”

“You can see through them!” she said.

But no one could explain in what ways, besides being translucent, they were different from opaque forms.

I began to realize that if Caleb could continue in this way, with what seemed to be the same personality and the same mobility, then that meant that death wasn’t the end. 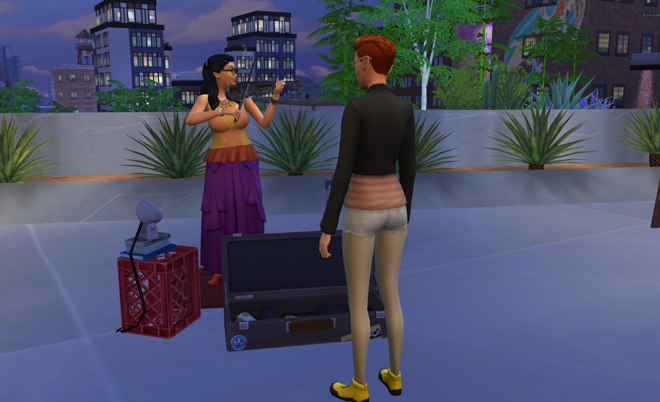 In fact, I started to wonder if there even was such a thing as “death.” I remember a painting I composed during those days of questioning. It was murky, dark, unformed. I felt very inspired as I worked on it.

I couldn’t get my mind around the concept of “death”–not in words, anyway. But this painting somehow seemed to speak in a way I could comprehend.

Salim dropped by while I was working on it.

I took a break and we sat together on the couch. I remember that Salim seemed happy.

I was not happy. I was inspired, but mostly, my mind kicked up into overdrive.

All the ideas I’d been painting suddenly started expressing themselves to me in words. Salim began humming under his breath, singing along with the radio. I remember the inane pop tune that was playing. I often listened to pop when I painted in those days. I believed it helped with the inspiration, but really, I think my mind liked the bubblegum effect of the one-four-five cadences. Plus, it had a good beat.

Finally, I was ready to talk. The words had formed themselves. 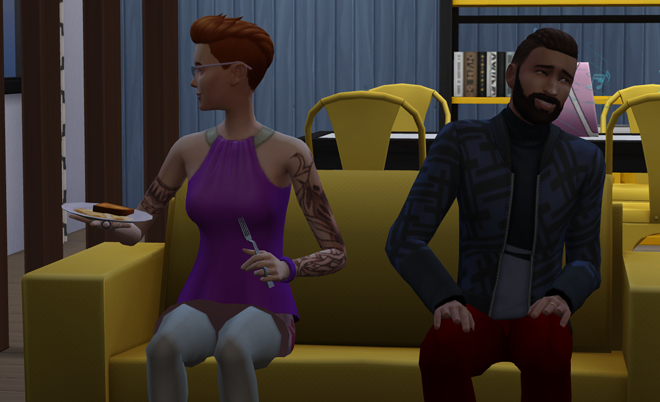 “So there is no death, after all!” I announced. “When he died,” I said. “And not only me. Everyone who saw him cried. Even the Grim Reaper cried. Why did we cry if there’s no death?”

Salim didn’t have an answer.

“Why have you been smiling since you came in?” I asked him.

“Could you stop if you wanted?”

We laughed, in spite of ourselves.

“It doesn’t explain anything,” I said.

“Does this?” he asked. And we stood and hugged each other. “You’re my best friend,” he said.

“You’re mine, too.” I replied. “Is it because of my scintillating conversation?” He laughed. “It’s because of your silly grating conversation!” he said.

I didn’t answer my questions that night. Emotions were still opaque to me, more controlling than controlled.

I wouldn’t say that I control my emotions now–I tried that. It didn’t yield a viable harvest. But I would say that as I’ve gained in understanding, my emotions don’t control me, not all of me. I feel them. I cry, laugh, or smile. I allow their expression as the emotions get triggered by events or the environment. But I realize there may not be much rationale to them. After all, if we cry when we witness the reaping of an acquaintance, knowing full well that this is not the end–that there is no death, only transformation into a new form–then the grief that stirs those tears is a reaction of our bodies, not the result of the understanding of our spirits and minds.

I’ve come to view emotions as a physical response: crying is what my body does when I witness a reaping; grimacing is what my mouth does when someone insults me; smiling is what I do when I walk outside on a beautiful day. In a way, none of it really matters. And in another way, it all does, even in its arbitrariness. It’s symbolic, after all, created to help someone else make meaning of life, even if, for us, our responses mean very little.