When I tell the story of my life the way I have been, shaping the tale around discovery and epiphany, it seems that each moment traversed mountaintops.

My life has been built on ordinary days. I write a book. I publish it. I collect royalties. I watch a street performer for work. I paint a mural. I write a review. I get a promotion. I earn money. But not much, most of the time–not enough to buy anything new very often. Not enough to do much more than pay bills.

Not much will interrupt the steady traipse of the ordinary days in an ordinary life.

Of course, in the Art District in San Myshuno, what is ordinary?

A man in a garish floral suit, sipping a latte while he prances in his red shoes down the sidewalk.

A guitarist in a purple turban playing flamenco tunes. Don Lothario disguised in glasses to put a move on Penny Pizzazz.

Maybe a city dweller’s ordinary is a suburban Sims’ extraordinary.

“I’m trying to convince Eric to move here,” Alice confessed. “It’s not that expensive, is it? If we sold our home–have you seen our home?–if we sold it, we could probably afford a nice loft somewhere. How are the schools? Are they good? I’ve heard they’re good.”

I didn’t have advice for Alice Spencer-Kim. I didn’t know about schools or selling homes or finding bargains on lofts. 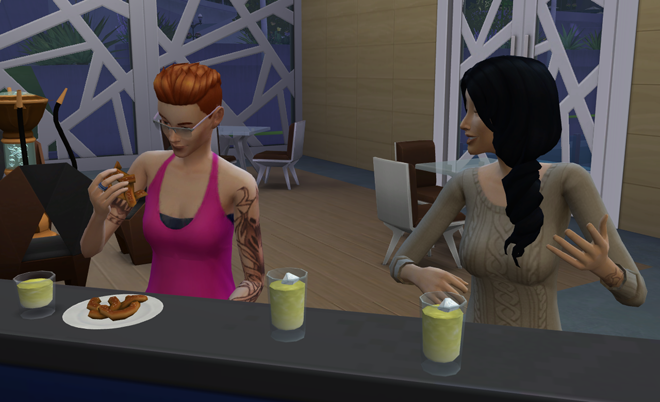 “We don’t have any vacancies in my building.” That was all I could tell her. “And I don’t know very many kids.”

But it was interesting to see through her eyes and discover that even an Art Center pretzel could be exotically delectable.

With neighbors, we built the fabric of our everyday culture. It included the aromas of grilled cheese sandwiches, green tea, and taco casserole, the sounds of fighting and  making up from the couple in apartment 305, and the silly stories Salim told about the weird dreams he had during his afternoon naps while said couple was fighting and subsequently making up. For Salim, all of it was boring. It was home. It was everyday. It was ordinary.

I never grew tired of it. You’d think, after reading my accounts so far, that I was always seeking the stimulus of learning through new experiences. But that wasn’t the case at all.

During the early days, new experiences happened because everything was new. But later, it wasn’t my first conversation with Salim and the neighbors: It was the twentieth. And while Salim was bored out of his socks listening to me share my ideas with them yet again, I enjoyed the conversation. I like the quiet smiles of my happy neighbors. I like the ordinary round of complimenting outfit, brightening day, and talking about cooking.

I liked listening to the neighbors, too.

“Why this old jacket? It’s nothing. Just something I spun into.”

We’d have the same conversation again the next day, and I’d still enjoy it.

Salim had a better time when it was just him and the other key-holders hanging out in the apartment.

Something about the apartment–maybe it was the pop music we played or the endless glasses of water he drank–always put him in a good mood, even if he was bored, tired, or frustrated when he first arrived.

We didn’t always talk about esoteric subjects, Salim and me. Sometimes we talked about squid. Or favorite authors. Or computer games.

Sometimes we had contests to see who could tell the weirdest story.

“The raccoons,” Salim said when he began one of his favorite recurring stories, “they are not really raccoons. They are government agents.”

I would counter with my favorite story about the masked swimsuit marauders, which never failed to infuriate Salim.

“No. Not the marauders!” he would say with a shudder. “They give me the creeps.”

“True,” he’d reply. “But raccoons are cute. Even if they are conducting surveillance.”

I had one friend that I especially enjoyed talking to. Maki. No conversation with her was ordinary. She was extraordinary.

She was the mixologist I sang karaoke with on one of my first days, and we remained friends. When she wasn’t working, she dressed in a pink turban, a purple halter-top, and ochre gloves with beaded spangle bracelets.

Maki was a prime vampire. Whenever she was in the neighborhood, I got the urge to talk with her. I gave her a key so she could come up anytime she needed to get out of the sun. I didn’t want her getting scorched.

“There’s not much to know.”

But there must have been. Because after every conversation, I found myself wondering more and more about her.