At this point in the game-play, the challenge, which ends on the extra-terrestrial child’s Young Adult birthday, was nearly over, but I still had so much story to tell!

I decided that on the eve of the YA birthday, I would turn aging off, play according to challenge rules up until 3 p.m. on what would have been the birthday, and then declare the challenge done, while continuing with the save, challenge-restrictions lifted, until this arc of the story reached its conclusion. (There is a sequel planned to pick up after Sept becomes a Young Adult.)

During the challenge, we can’t click on the extra-terrestrial child’s portrait, check his needs, assess his skills, or direct his actions. So once 3 p.m. Sim-time came, I was curious to see what I’d find!

I’d directed Sebastion to do a lot of character-building interactions, from “teaching about…” to “influence to…” to “reinforce.” And the approach worked, leading to four values within the traits level, and the fifth very close to it.

With “influence to…” do homework combined with “reinforcing doing homework” and “reinforcing getting good grades,” Sept was a great student. Another trick I used was to “influence to work on school project,” then once Sept started, I had Sebastion help him. This way, even when Sept stopped working on the project five minutes later (Sim-time–usually to go check to see if there were any dishes to wash! 🙂 ), I was able to have Sebastion complete the project, yet since Sept initiated it, he received full credit for it! I used that technique twice and Sept received some generous grade-boosts from it.

One thing I love about doing homework is that it increased responsibility–of course, the flip-side to that is that higher responsibility contributed to Sept’s persistent dishes-doing activities, even with no dirty dishes on the premises! 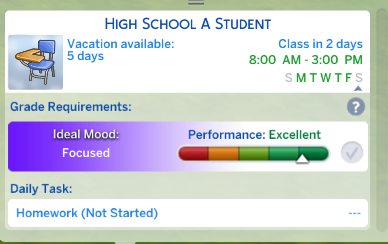 Sept rolled Soulmate. It fits! I was really pleased and surprised to see that he’d gained 1,075 satisfaction points! I decided to save up to 2,000 and buy “Incredibly Friendly” with them. I will be switching aspirations temporarily to have him complete “Friend of the World.” That’s one of my favorite early aspirations to complete, since this way, with the reward trait, we don’t have to worry about the Sim losing friends when he gets too busy to socialize with all his friends. (Note from Future-Me: It’s harder than expected for Sept to complete this aspiration–we’ve run into a batch of xenophobes, at present, and so the usual “Friendly Greeting” + “Get to Know” + “Brighten Day” = Instant Friend isn’t working.) 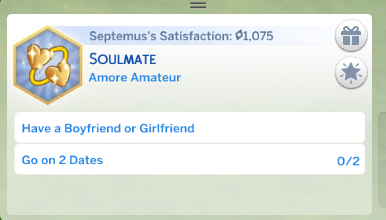 I’ll switch Sept back to Soulmate after Friend of the World is done, and I might have him also work on Body Builder and maybe the writer aspirations simultaneously. (I love switching between aspirations!)

Sept’s skills aren’t bad for an autonomous Sim. He seems naturally gifted in Logic and enjoys it greatly. Fitness accompanies his “Active” trait, which he acquired as a teen. Rocket Science was achieved quickly through helping his dad build the rocket. The lot traits facilitate that!

Reflections on the Challenge

I love this challenge. It’s obviously another Pinstar Classic! (I mean, look at all the awesome stories it’s spawned!) This has several features which I adore in a challenge:

Plus, the single-most enjoyable aspect of this challenge, for me, are all the heartfelt moments between care-giver, child, and the Simmer. TS4, like no other iteration of the game, can create rich emotional interactions. I have fallen head-over-heels with Septemus–and I don’t feel I’ve invented him. He is, in game, the way he is in story. Truthfully, I feel it’s an honor and privilege to get to have him in my game and to get to know through their stories all the other pagotogo!

Get ready for more! The story continues! Thank you, readers and collaborators, so much, for being part of this! 🙂