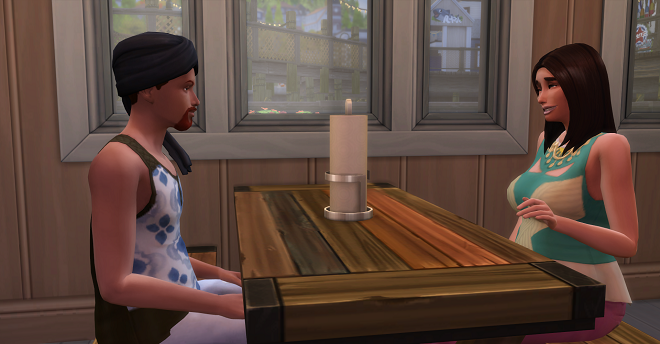 My neighbor Khaled spotted me strolling along the waterfront.

“You always say no,” he said, “so I don’t even know why I bother to ask, but you want to join me for drink?”

This time, I did. I had so much sexual energy pent up inside me since I found out that Max wasn’t strictly gay, I didn’t know what to do with myself. My safety valve failed, and I careening into dangerous territory.

Maybe if I had another outlet, like Khaled, I could pull my feelings for Max back into the happily unrequited safety zone.

I’d known Khaled for a while. He was a regular at the Culpepper, so we saw each other almost daily. We were friendly. I knew he had a long string of girlfriends, so I felt secure that nothing serious would come from meeting him for drinks and whatever came after.

We went to the little bar near the docks.

“So, what’s been keeping you busy, sweet-pea?” he asked.

I told him about my novel. 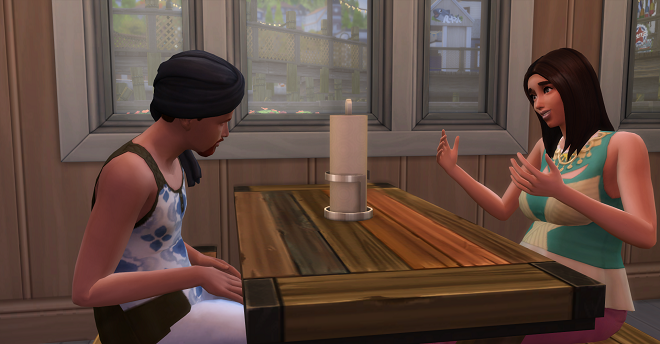 I detailed the challenges I was facing with the project. The main one: How do I express in words the perspective of a creature who is nonverbal?

“Are you telling me that your narrator is a woolly mammoth?” he asked.

“Well, not exactly the narrator, but I’m writing from limited third person, and the perspective is that of the woolly mammoth.”

“But didn’t they have people back then? Why not write from the perspective of a caveman? I’d read a caveman novel, especially if he had a hot cavewoman hunting at his side. Like a character based on the author. Strong. Athletic. Hot.”

I didn’t go into it then, I didn’t want to kill the mood, but I was thinking of switching up the narrative perspective. Only I wasn’t considering a human perspective; I was considering the perspective of anaerobic bacteria.

Somehow, after my recent experiences of “I am not…” and the ensuing sensations of connection, a bacterium’s perspective felt more accessible than a complex mammal facing genomic meltdown.

In my research, I’d stumbled upon the idea of bacteria cloning: Within a colony of what seemed to be multiple organisms might exist only one genetic individual. Each of the millions of bacteria within a single colony might represent a single genetic pattern–that is, until conjunction, when a newly introduced bacterium transfers its genetic material to another through direct contact. The idea thrilled me. What excited me even more was the notion that clones of some of the exact same bacteria that existed during the time of woolly mammoths might exist now, right alongside those which had, through the millennia developed into genetically distinct individuals.

I was, at the time, considering introducing a new thread to the novel which would explore this, extending the perspective into the modern day. The role of bacteria in the development of fossil fuels came into play in some way, too, but I wasn’t yet sure exactly how.

I thought of all this while Khaled chatted about the Paleo diet, waxing on about the advantages of meat-based diets, although he was, and had been all his life, a vegetarian.

People strolled in and out while Khaled compared the benefits of meat and vegetable proteins. I looked up when he asked me how I liked eggplant prepared–roasted or grilled–and that’s when I saw him.

“Look!” I whispered. “At that table! No! Don’t look! Is that him? I think that’s the author of a blog I follow over there.”

He looked. “You mean Septemus? He’s an old friend of mine. You want me to introduce you?”

“What are you doing tonight?” Khaled asked as we paid our tab and headed out into the street.

I told him I was thinking of riding the ferry across to San Myshuno. I’d read they were having a romance festival. I thought maybe he’d take the hint and ask if he could come, too.

When he didn’t, I still held out hope that maybe he would surprise me and show up. I was still looking for a way to release some of this pent up energy.

While I waited in line at the festival gates, I heard a high, echoing, flute-like voice. I turned to see who spoke like that. Septemus stood behind me, talking to a man I’d seen a few times in the Culpepper. 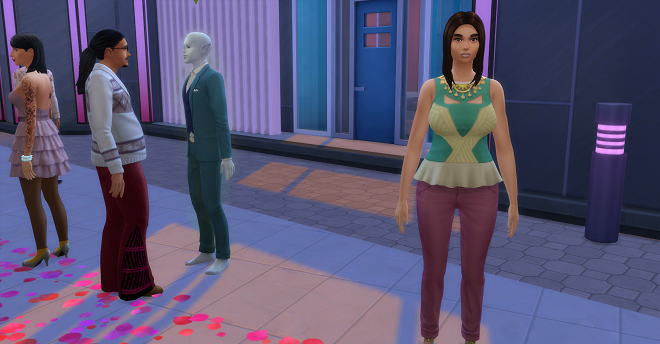 I felt a moment of doubt. It couldn’t be him, here in San Myshuno, could it?

I checked his blog on my smart phone, looking at his author photo, for confirmation. Yes. it was definitely him.

I ducked into the karaoke bar, flushed and excited. Maybe Khaled was here. He wasn’t. I checked out the vendor booths. No Khaled. I browsed the canvases of artists painting beneath the stars in the rose garden. I was showered with petals, I sipped sakura tea, I flirted with strangers, and all along, I kept half an eye out for Khaled, who never showed.

Shortly before the last ferry was scheduled to depart, I decided the best I could do was a last-ditch effort to ask the Love Guru to tell my romantic future.

I waited in line. Septemus was talking with her. He turned and broke into a wide smile when he saw me.

“Byu Kiya!” he said. “Badastaliyu.” He took my hands in his and kissed them, and all the while, the Love Guru looked on and chuckled.

“I need to catch the ferry!” I blurted out, when he released my hands, and off I ran, out the plaza, down the alleys, all the way to the dock where the last ferry blew its horn as it pulled up to let on the passengers, eager to return home. Septemus Sevens had kissed my hands.