We went through a long stretch with no new arrivals. Ritu helped Luna and Morning Joe settle into Sebastion’s old house. “Like Abbot and Costello,” Ritu said, “that’s how they get along!”

“Minus the slap-stick, I hope?” I asked.

“Sometimes. Sometimes not,” Ritu replied with a chuckle.

Still, one of us kept post at the Culpeppers. We never knew when someone might show up.

In those days, when I was just getting a feel for this type of work, I spent a lot of time wondering who could be trusted and who not. The Culpepper nearly always filled with a crowd. Some of the people, his old friends, like Caleb, Ritu, and Anya, knew Sept, of course.

There were the regulars: Diego; Gavin; Don and Nina, who seemed to Caleb’s coworkers, since they all wore the same uniform.Then there was Mitchell. I didn’t know what to make of him, for he was always there.

I asked Sept. He knew who he was, of course, but he’d never been introduced. “It’s kind of funny I don’t actually know him,” Sept said. “I’ve seen him around ever since I was a teen. I don’t think I’ve spoken even one word to him.”

“I have no idea,” Sept said. “He’s curious enough. I don’t think he’s friends with any of my friends, though.”

Mitchell had me worried. I tried to remember the twenty-fifth truth: There are no enemies. But at the time, when the Cookiestadores loomed as an ever-present vague threat, I was unable to integrate it into my reality.

One evening, as I was trying to get a feel for Mitchell’s stance, I began talking about current news while we crowded around the counter. In the space of a few minutes, my conversation spanned the risk posed by climate change to over fifty percent of bird species on this continent; the refugee crisis; tax hikes posing as tax cuts; and the fractures in Pine Island glacier. I was in the midst of describing shifts in glacial calving patterns, and rapidly losing everyone’s interest, especially Mitchell’s, when a stranger walked in. 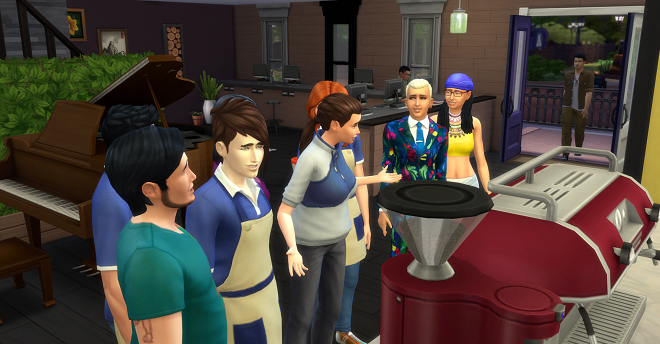 Even though I’d only been at this for a few months, by this time, my stranger-radar was well developed.

This one gave every indication of warranting attention: stopping before joining the crowd, obvious signals of tension, and a distinctive physical appearance.

He had the eyes and gaze of an extra-T. I knew, by then, what it felt like to be seen clear through. 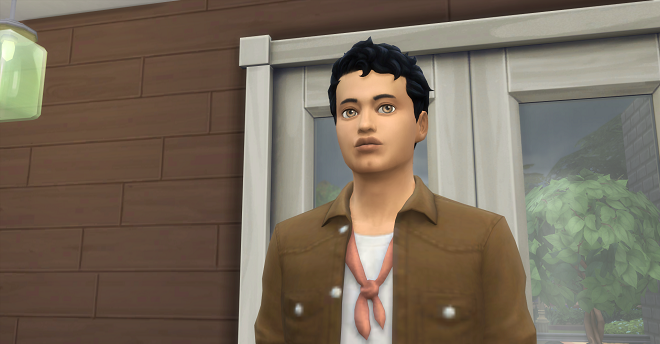 I pulled Caleb to the side on the pretense of showing him a Pine Island video. He and I had become close friends, almost as close as he and Sept were, and I felt safe with him. I liked  the cover of one or two trusted friends when making first contact with the strangers who entered Culpepper.

He greeted me first.

“Of course not!” I replied. “Make yourself at home!” I’d been trained: Welcome everyone.

He walked past us and sat at the piano. The crowd clustered again.

I took note of the position of my supports: Caleb stood before me. Ritu directly behind. I mapped the location of the others: Nina was lost in conversation with Diego, Don was spacing out, and Ulrike seemed ticked off about something. Mitchell was staring mid-distance, as if he were listening in to a specific conversation. I got the feeling he was listening to Caleb and me.

Caleb and I chatted about nothing much–just small talk–until the crowd thinned.

I moved closer to Ritu when the stranger approached.

He looked at me with a grin. I couldn’t get a feel for him. I had such little experience by that time–only Morning Joe and Luna Kari had come through, and both of them spoke the code immediately.

I kept reminding myself, No leading questions. No hints. He’s got to volunteer it. I didn’t even think, “Cookie store.”

It’s a lucky thing I kept my mind as blank as I could, for the next moment, I felt him in my thoughts.

It’s a weird sensation, being mentally probed by an extra-T. I’d felt it a few times before. Sept and Xirra generally asked first. Even with permission, it felt odd, like an egg-beater, or something. Scrambled. That’s how I felt afterward. 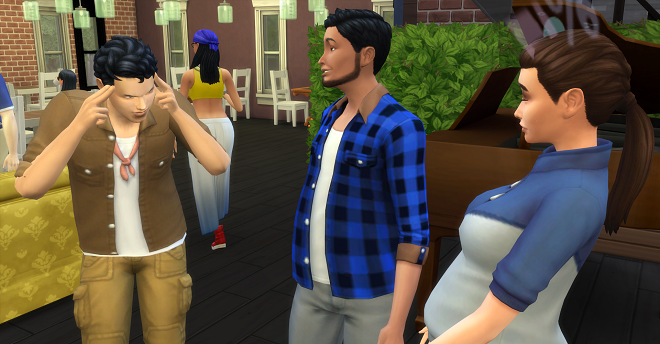 “I’m sorry,” he said. “I’m looking for someone, but you don’t seem to have seen him. You don’t happen to know someone who might have, do you?” 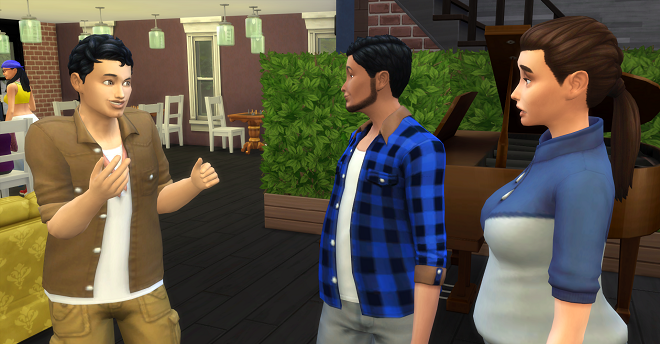 “I might have seen him?” I said. “If I knew who he was?” No leading questions, I reminded myself.

Anya interceded, “Here, dear. Have an espresso. Will you take sweets with that?”

He took the demitasse and joined Caleb on the couch.

We looked across Caleb at each other. 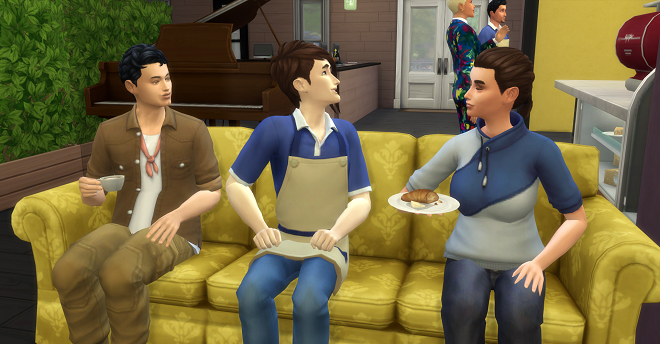 Warmth flowed through me, from the crown of my head to my toes. He felt familiar. He felt like Sept.

Now I didn’t know who he might be, if he were one of the rebels, or Cookiestadore, or a visitor. I didn’t even know for certain that he was extra-T, but the situation was definitely beyond me.

“I’m sorry again for my intrusion. I’ve not spent time with moishkajotu in a long time,” he explained. 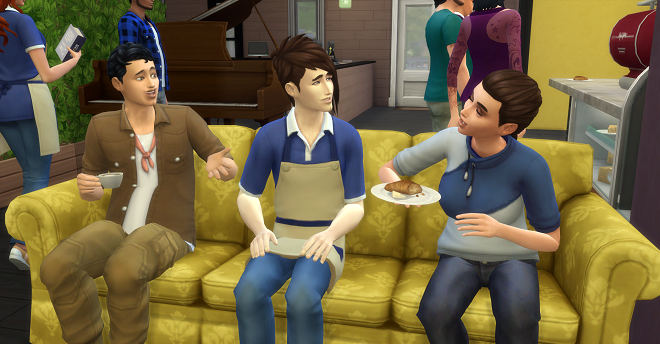 I recognized the word “moishkajotu”. Sept had begun teaching me Vingihoplo. Literally, it means strange people, which extra-Ts call the rest of us.

We’d been practicing the numbers. It’s a base-twelve system, which gave me no end of difficulties, until I started thinking in dozens. Lui was sixty.  And E is the first person pronoun.

“Will you excuse me for a sec?” I asked. “I need to make a quick phone call.”

I called Sept. “Can you get over here immediately?” I asked. “There’s somebody you need to meet.” 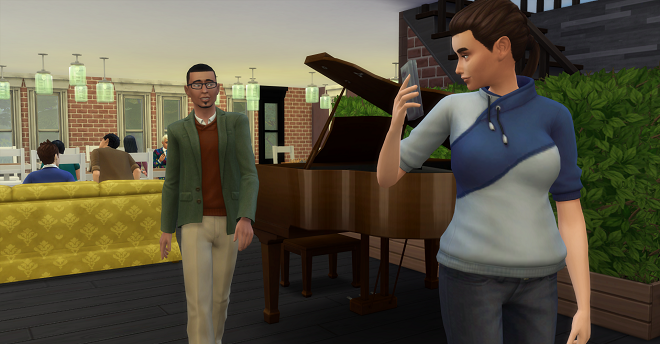 Author’s note: Curious about Elui? Read Potatoes and Carrots by Xantheanmar. Many thanks to Xan for sending Elui our way and for cowriting this and the next few chapters with me!