It happened just like in the movies: The chime of a bass chord. The sensation of a distant someone calling. The collapse of the body. The separation of the light. The shadow of the scythe.

But I’m getting ahead of myself. That’s not the beginning of the story.

The story began at my retirement.

All my acquaintances said I was a fool to adopt a puppy at this life-stage. I had no friends, so I didn’t have to listen to them gripe that I was too old. I had no family, so I didn’t have guilt-trips. All I had was former colleagues, past clients, and distant neighbors, and who cared what they thought? Yes, I was old. I knew that. Yes, I’d likely pass before the dog did. But so what? I’d leave everything to him in my will and hire an executor to ensure he was cared for.

I got the puppy, Bobie the pomeranian.

Then we got a cat, Majora the calico stray, found wandering down by the wharf.

Then we adopted another dog, Nibbler the beagle.

Then we had puppies, Bosko, Bartholomew, and Babe, my little dingoes. 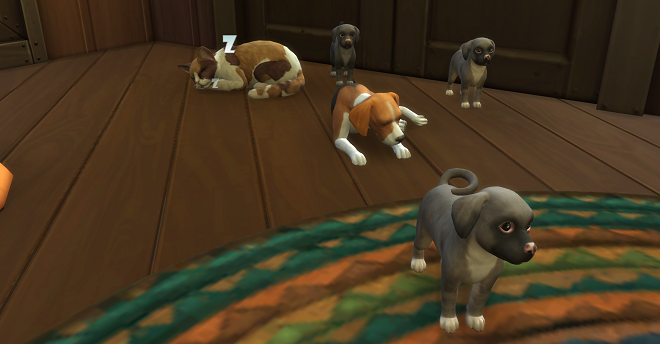 I was still alive. We had a full house. I could barely keep up, but I was happier than I’d ever been. I was in love six times over.

I still remember puppy breath and Bobie’s soprano howls when he was tea-cup sized. 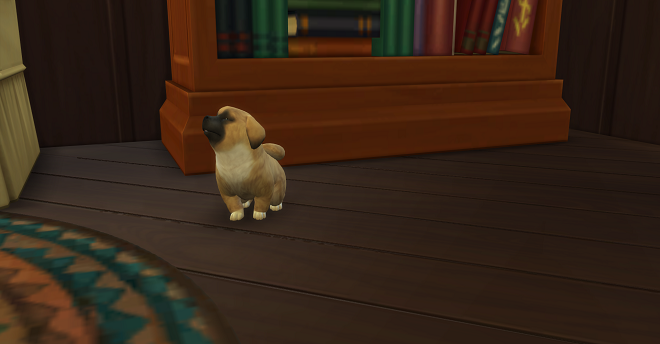 For a while, we tried training. Bobie learned to sit and fetch, though he was too lazy to show off either very often.

The puppies learned a smattering of obedience skills: Bosko learned to sit; Bartholomew to heel; all three learned not to drink from or play in puddles, not to wake us, and not to fight, something their mother never learned.

One day, the doctor told me I wouldn’t be long for the world: an aneurysm lay waiting to strike. I would have no notice, the doctor said. Maybe a blinding headache for an instant, but that would be too late.

Who would care for Bobie, Nibbler, Majora, Bosko, Bartholomew, and Babe when that coiled snake bit?

I’d hired a gardener when my plants began to suffer due to the time I gave the puppies. When she finished the garden chores, Tanvi would stop in to play with the pups, and we struck up an acquaintanceship

I explained my predicament.

“You want me?” she asked. “I’d live here and help out? And could I continue with the garden, if you wanted?”

Of course, but we hired another gardener, just the same.

I hadn’t had a close friend since high school. I’d forgotten what it was like to share secrets, to lay schemes, even to dream!

Imagine me, in my elder years, with the prospect of death waiting at the break of every day, hiding behind each sunset, sowing dreams like I was sixteen!

The puppies, clearly, were not eternally youthful. One day they were little.

And the next we knew, they’d grown! Now Bobie had competition for his chew toys and Nibbler had to feast quickly before one of her children would steal the beef.

Such good dogs, even when they were rascals!

Bosko and Bartholomew look nearly identical, with their coiled tails and beagle snouts.

Every day was like the next: Fill the food bowls, walk the dogs, sit and chat, paint, garden, sip tea, play music. Life cruised along a happy route, with a squeak-toy soundtrack.

I had more friends now than ever in my life, and it didn’t bother me that six of them had four legs a piece.

Bobie and Nibbler were very much in love. That’s what I blame it on. Tanvi said that I should be giving them credit, not blame. But I laughed and said they were to blame nonetheless!

Tanvi assured me I wasn’t too old.

“You’ve beaten the odds,” she said. “The doctor was wrong. Besides, who of us has any guarantees? The only guarantee I can give is that I think you’re pretty sweet.” 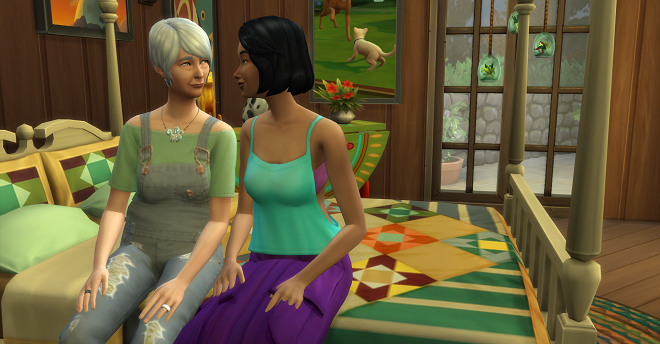 Neither of us were cut out for romance, really. I valued my solitude too much. She feared commitment. Yet somehow, while I felt crowded in, and she felt smothered, we still remained sweet on each other.

I dreamed of us getting engaged, but even still, the first time she asked me, I turned her down.

“I’ve told you that I’m leaving you everything,” I told her, “and we don’t need to get married to make it legal. You’re already in my will.”

But half a year later, I was still alive. This time I asked her. She turned me down.

“I won’t be purchased out of guilt!” she said. “You’re just feeling bad you rejected me before. This doesn’t make up for it.”

Bobie and Nibbler grew white hairs on their snouts, and their joints were stiff when they crawled out of their puppy beds.

I was still alive. I began to contemplate that I might outlast at least some of my four-legged companions. I hadn’t counted on this.

I saw a selfish angle to my desire, in my old age, to have a house full of dogs and a cat and a younger friend who loved me.

I’d been trying to cheat grief, hadn’t I?

Until I was old, I’d arranged my life so I would never have to care, so that no one would ever leave me. Had the deaths of my parents really upset me so much that I could bear living through no more goodbyes?

Then, when I was the next in line, and only then, did I open my home, my heart to let others in–so that I could leave first.

The night I had that realization, Tanvi asked me again if we might get married.

“Not for anything practical,” she said. “Not for any reason. Just because. Because my heart hurts when I see you walking and think you might someday leave without being my wife.” 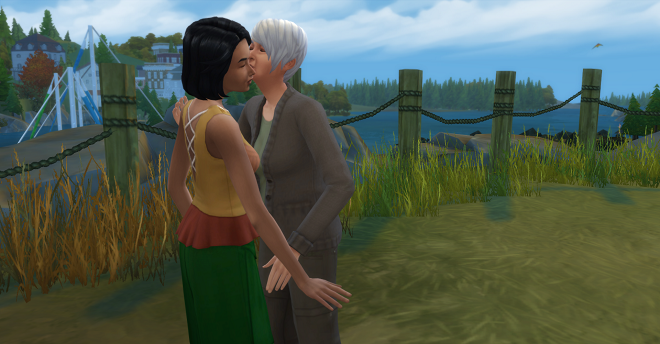 We congratulated each other on our brave hearts.

“I’d better be!” she replied. “I want you warming my soup when I’m old and gray.” 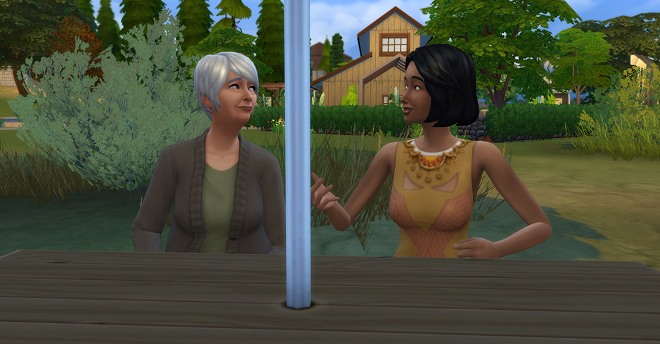 It would never happen, I thought, but it did.

Years and years passed, and I stayed alive while Tanvi, my sweet young wife, grew old beside me.

The years mellowed us, with so much to be thankful for. 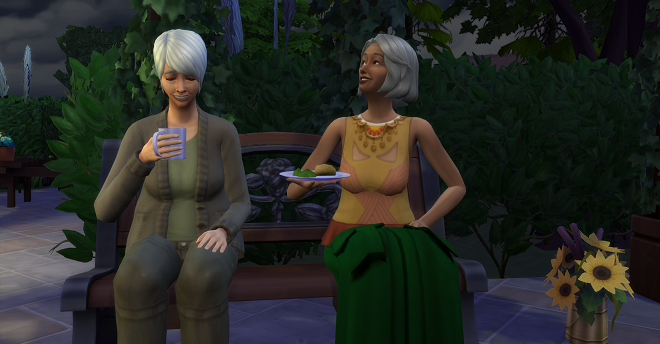 Bobie and Majora lived on, too.

We fiddled through the day. 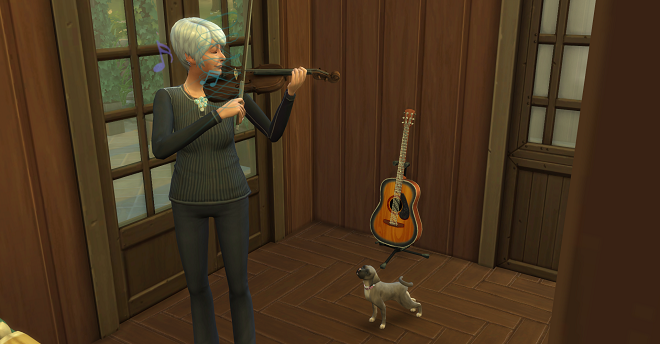 I practiced stretching my heart in case someone would depart before me.

Some days, Tanvi complained of ocular migraines. “My hormone’s are whacked,” she said. “I’m not cut out for old age.”

But we kept on, and most days were full of blessings.

And then it happened, like in the movies: The chime of the bass chord. The shadow of the scythe. 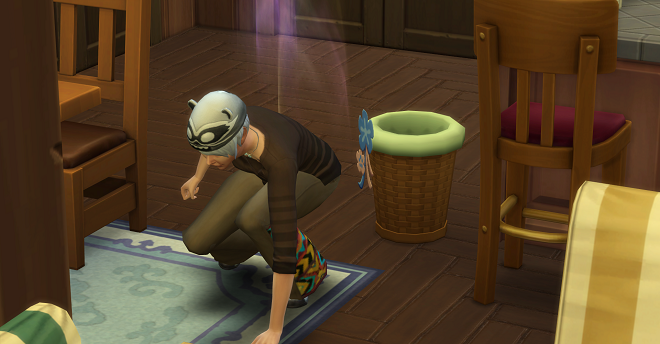 I did not know that I would have witnesses.

I did not reckon on their grief. 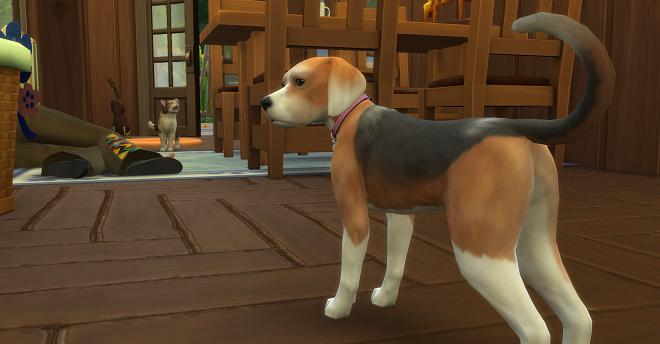 I looked down from great heights on Tanvi keening.

Death’s hands gathered my life-spark, pulling me together into a tight ball.

“To remain,” cried every spark that was me. “To remain!”

“So it is,” he said, pocketing my spirit to carry to my resting place, and then, he took time out of his duties to pet the cat.

Tethers bound me to the tombstone, perhaps so I might witness my mourning.

I had never stopped to think that I might be missed. 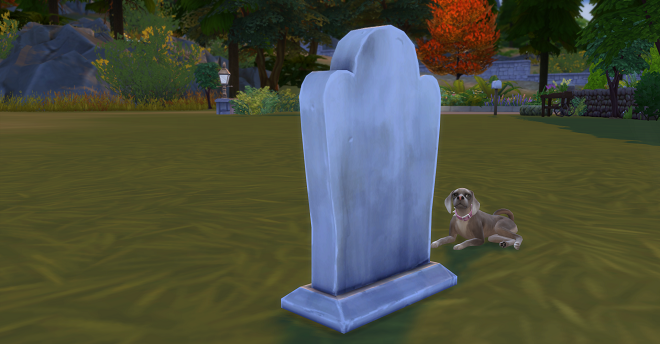 And Babe, the biggest rascal of the all, ran to the meadow at nightfall.

She slept curled beside my grave.

Author’s note: What’s this? It’s chapter one of my ten-gen dogacy! Follow along as we trace the generations of Bobie’s pups. (I’ll post the challenge rules soon!)