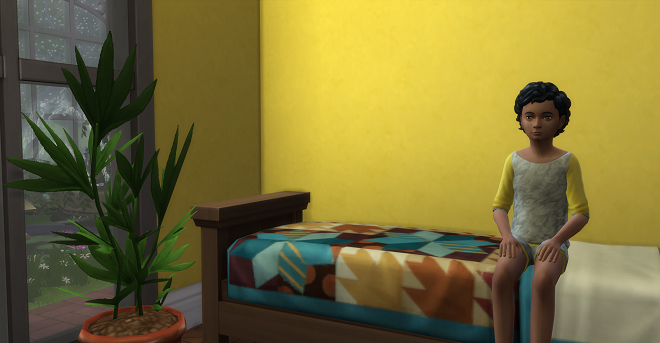 She woke to music. She hadn’t heard music like this except once, when her mom took her to the concert hall with the golden chandelier in the city.

The room she slept in had a tall window, all the way up to the ceiling. It looked out on a jungle, with flowers and ferns and a wild white panther with a black tail racing down the path. 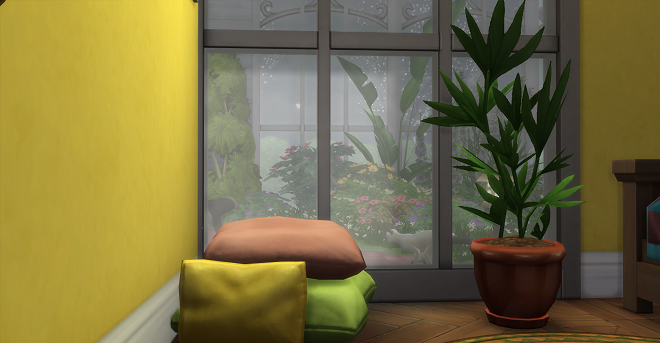 She supposed she might as well go find some food. She’d skipped supper the night before, and she felt so hungry that she thought maybe she was ill. 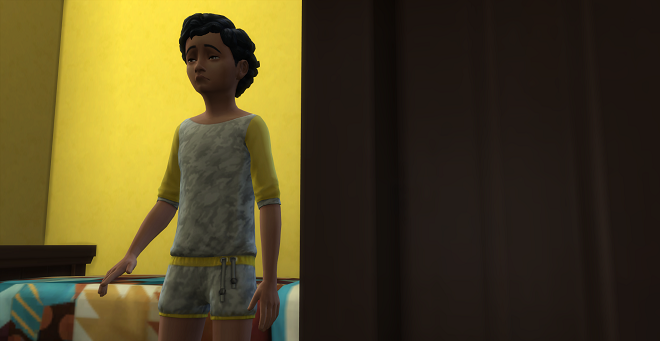 She followed the music, thinking it would take her to Great Uncle Jacob.

A fluffy white cat with a raccoon tail sat on the edge of the couch, glaring at her as she walked past. A fluffy orange cat, with an orange raccoon tail, sat guarding the fridge, giving her the stink-eye. 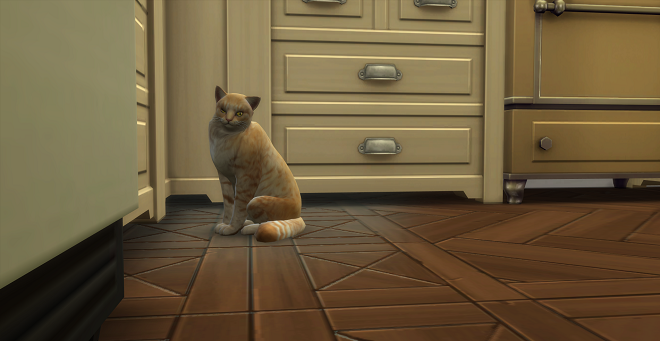 The black-tailed panther sat on the kitchen high-back, looking at her with curiosity. 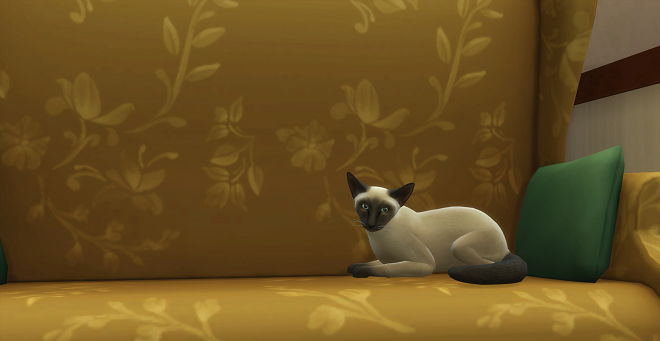 Great Uncle Jacob sat at the piano in the front parlor. Sarah knelt on the high-back sofa and peered over the back at him. 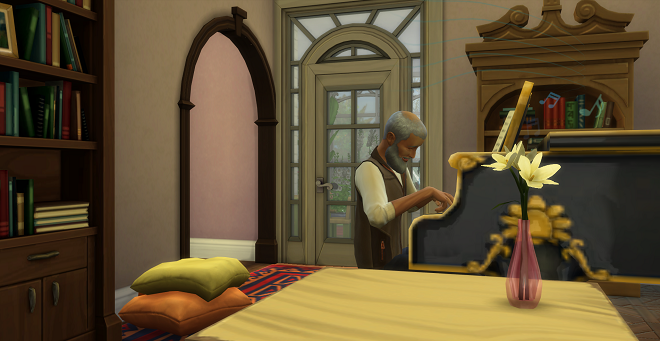 She didn’t know what fancy music it was that he played, but it did funny things to her ears. If ears could taste, then this would be sweeter than the sweetest salt-water taffy.  She closed her eyes to see the swirling colors: pink, purple, green, blue, with starbursts of yellow and red. 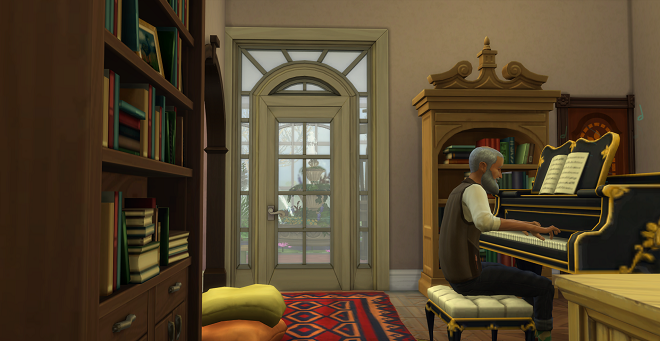 He stopped when he saw her peeking above the sofa back.

She nodded. She wanted to ask him about the music, but he was already making his way to the cupboard.

She sat on the couch, and the panther followed her and jumped up beside her. 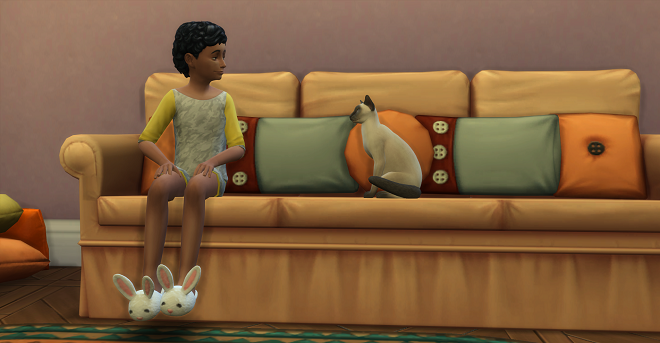 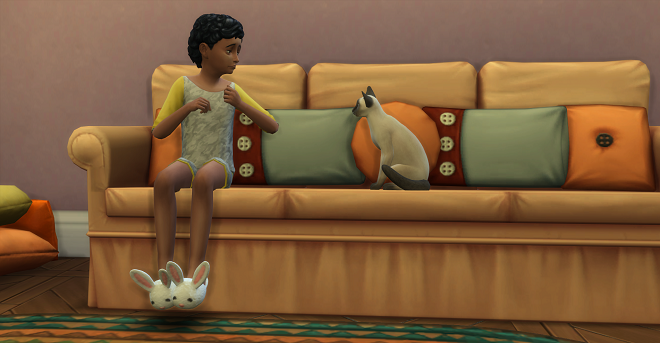 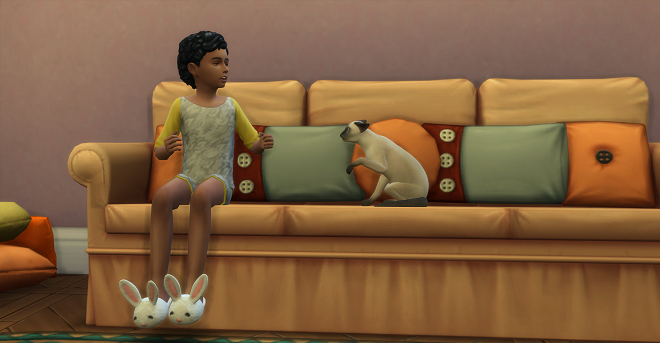 The panther grumbled and lay down.

“Not used to company,” he said. 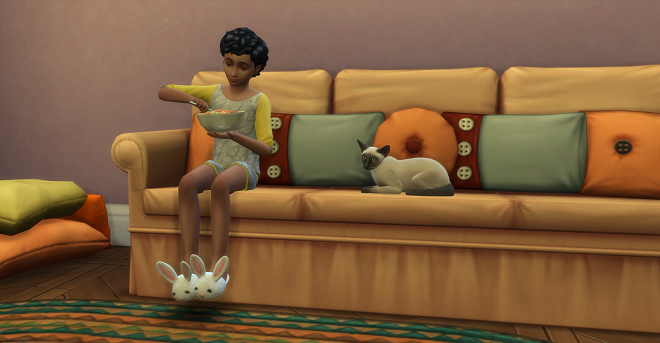 When Sarah finished her cereal and washed her bowl, she asked Great Uncle Jacob, “What are my rules?” 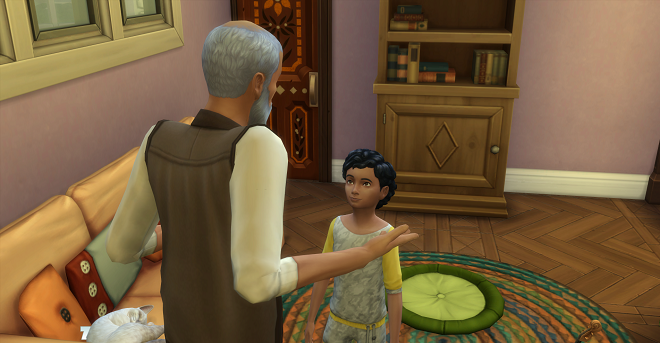 “Captain, we’re on an island. No other people around. Anywhere you can go, you can go. ”

“Aren’t you scared I’ll fall and break my leg?”

She breathed it in for a moment: No rules. 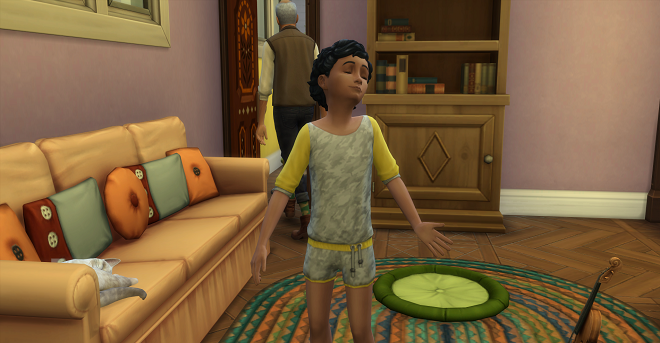 That meant, she was free! 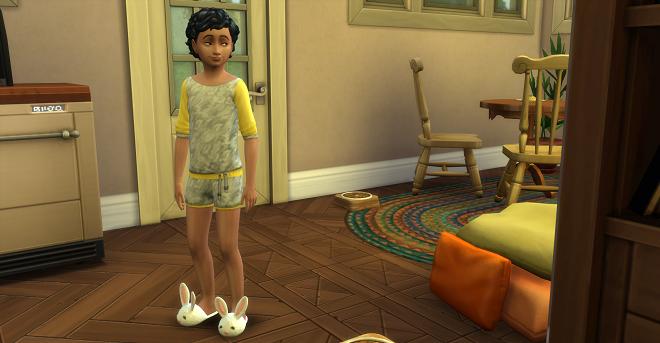 The panther and the white raccoon pounced on each other in the kitchen. They didn’t seem quite so frightening when they played like kittens. 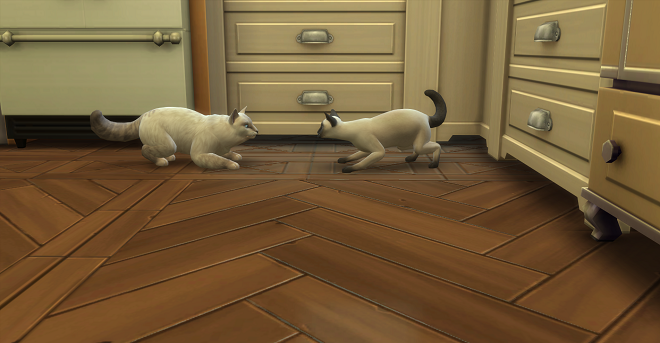 Then Pippa turned and hissed at her.

“All right! I was just leaving!” Sarah ran through the front parlor and into the jungle.

The fountain roared like a waterfall, and the air was warm, heavy, and moist. 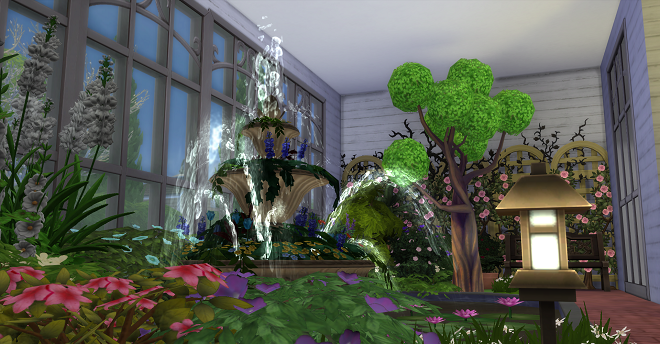 It smelled like candy left overnight in a wet pocket: sweet and musty all at once. 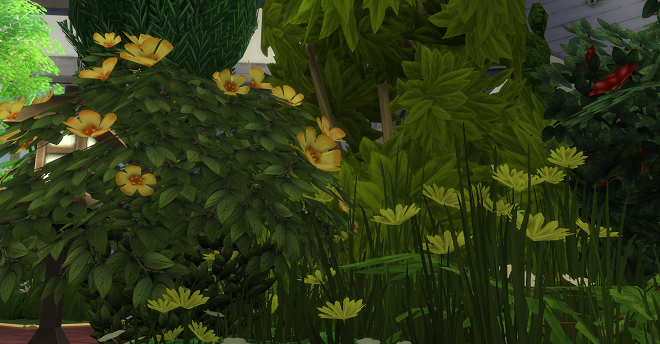 Crickets chirped, even though it was winter outside. 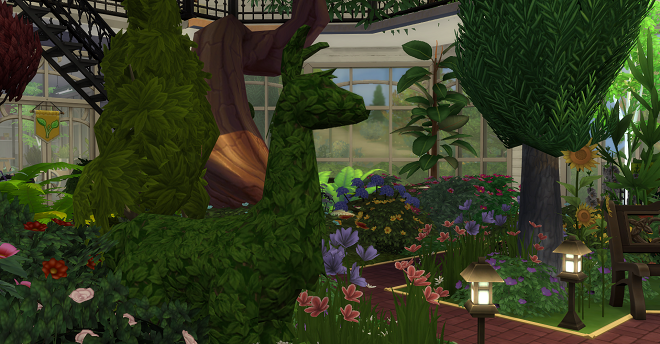 She followed a red brick path around and between the flower beds. Fairy lanterns lighted the way.

One path led to a long room, lined with work tables and all sorts of potted plants.

“This must be the plant hospital,” she said. She walked to each, offering some a sip of water, others a kind word, and still others a song. 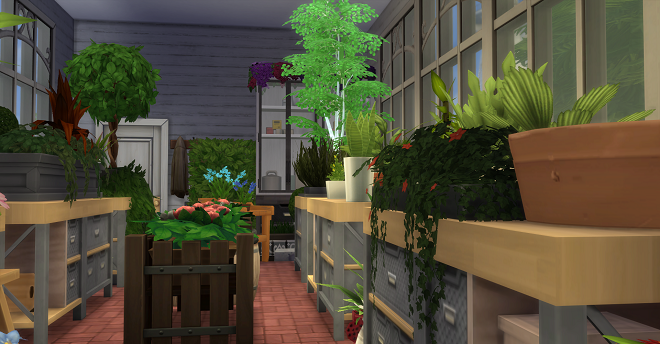 A funny green dwarf looked at her bossily. “Don’t worry!” she said. “I’m not breaking any rules, for I haven’t got any to break!” 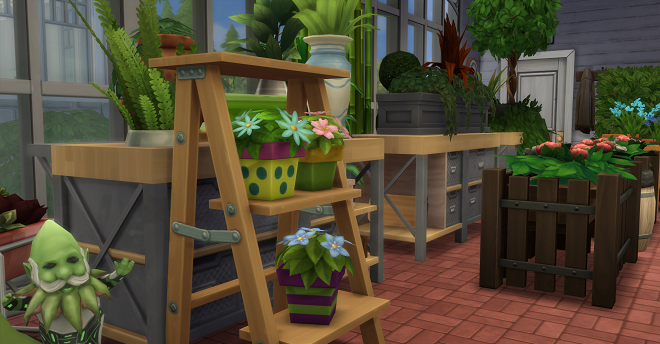 When she left the room, Pippa stood guarding the door leading back to their living area. 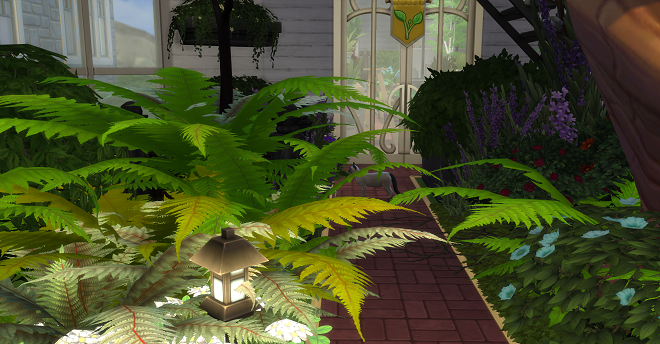 “Shoo, cat!” Sarah whispered. The panther sat down in the middle of the path. 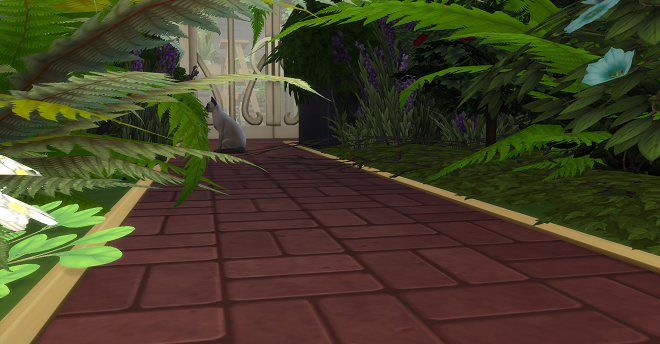 A tall madrona grew in the center of the tower, its limbs spaced like ladder rungs. 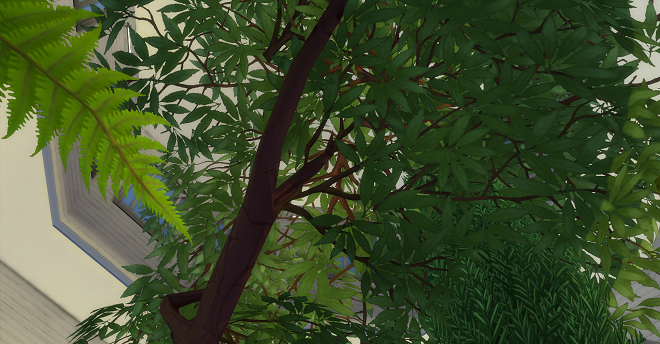 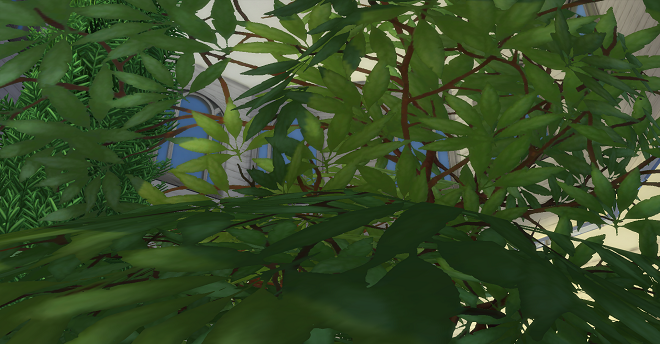 Soon she was up in the tree’s crown, higher than the neighboring hemlock,  where the hot air smelled like dried apples and cinnamon, and when she looked down, the panther was no bigger than a mouse. 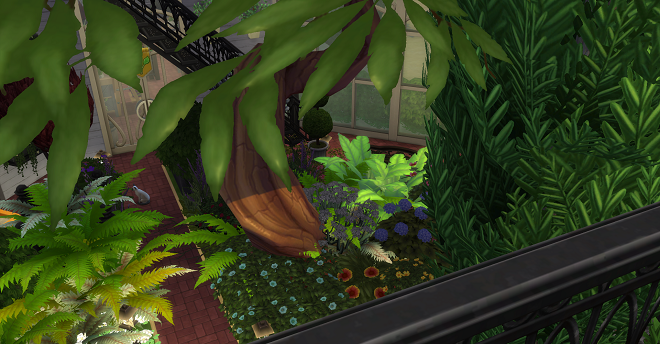 She climbed until she could climb no higher, and she looked out the tower windows, out past the dock, past the breakwaters, across the straights to the mainland then over the hills, imagining that she could see the city beyond, and out past the city, down a quiet road, where the white hospice stood under the beech trees, and where her Gran lay beneath a log cabin quilt, while her mother sat beside her, singing softly and talking.

“Oh, come back!” Sarah prayed. “Come back before Christmas, with Gran, too, all well again!”