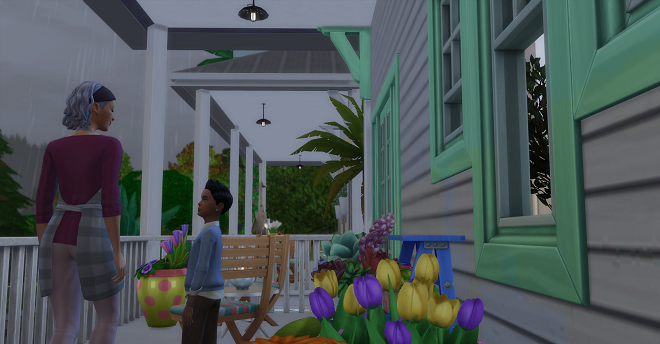 Sonya and I sat at the kitchen table with a pot of tea and the ledgers, going over the figures from the first week’s sales, while the rain from a summer storm rolled down the windows.

“I think we’ve covered the expenses,” I said.

We added the columns again.

“All except the cost of sugar,” Sonya said.

“Maybe it’s the storm?” I suggested.

Sonya pulled out her phone. “Crap. That’s not it.”

She switched it off as Elise stomped in.

“Can I use your computer?” Sonya asked me.

A few minutes later she was back.

“Well, that’s that. He’s closed our mobile accounts. I can’t afford this right now. Honey, what do you need a phone for? I haven’t noticed you calling kids back home.”

“Duh, Mom. My clients? How do I know if I’m supposed to babysit if they can’t call me?”

“You can use my landline,” I volunteered.

“But you never answer your phone,” Elise said.

“But I would answer if I knew you were expecting a call,” I said. “And you could answer, anytime you heard it ring.”

“Then you could take a message.”

“And tell them you’ll never call them back, right?”

“Well, yes. That goes without saying.”

We had a deal. One crisis averted.

Later that afternoon, during a break in the rain, Sonya and I put on our boots and slogged down the puddled paths to harvest mesclun greens for the market. Sonya thanked me again.

“Seriously, it’s nothing,” I said. “Might as well get some use out of  the phone.”

“You don’t know what your help means,” Sonya said. “But you might one day. You see, this is significant, what he did.”

I looked at her with my questions in my eyes.

“It means something,” she said. “It means he’s cutting us off financially.”

“Elise suspected he’d do this all along. I was holding out hope, I guess. But this pretty much spells it out. We’re on our own now.”

She picked up her harvesting basket and headed inside to rinse and package the greens. Some people find relief when they talk, but I’d learned that Sonya didn’t. When she spoke of their troubles, the wounds opened up. Maybe in the long run, that would be the way to healing. But I could see that she felt she had to stay strong for her two kids and for herself. I guessed she feared that once she opened up, it would be a while, maybe a good long while, before she could find her way back to strength.

I finished the harvesting, mulched a few beds to keep the rainwater from evaporating, and joined her in the kitchen. She kept her eyes on the greens she was layering into the plastic bags.

“Bernard asked if he could do some painting, like you offered. You think maybe you could help him find the paints and such? He’s up on the porch.”

I passed Elise sprawled on the couch, Tiger and Crystal lounging on either side of her, an old Jean Arthur movie on the TV.

“Is that Arizona?” I asked.

“Yeah,” replied Elise. “She’s tough. She’s not taking it from anybody.”

Bernard leaned against the railing of the porch looking out over the puddles. He raised his finger to his lips when I approached.

“There’s a nest,” he whispered.

He pointed to the rafters where a pair of mourning doves had built their nest of pine needles and marsh grass.

“I know!” I said. “This is their third batch of the summer!”

His eyes widened. “How come there’s only the mom?” he asked.

“I’m not sure that is the mom,” I said. It looked like the male to me. “They both take turns.”

“Sure enough. They take shifts.”

We sat and leaned against the wall, looking up at the dove, who cocked his head and looked back at us.

“Nope. He and his wife know me,” I said. “His wife grew up here, in that very nest, and so did her mom, so they know me from way back.”

We heard the whistle of wings, and the female flew up to the porch, landing on the railing.

The female tilted her head to see us better, took a few steps along the porch rail, then flew up to the nest. Just as she landed, the male flew out, and we felt the rush of wind from his wings.

“They take turns,” Bernard said. “I wonder maybe. The babies stay there, right? I wonder maybe, could my mom and dad do that?”