I’ve begun to suspect that Lucas has become too familiar with Death.

Living here, he’s endured too many visits by the Hooded One, and now Old Bones is taking liberties.

I keep track of the Dark Shepherd. I want to be there whenever he stops by for one of the old dogs. So I’ve come to develop a type of second sense to alert me of when Lucas is in his proximity.

But I never expected to see what I witnessed at the Yacht Club. Sulfur, smoke, rags, and all, Mr. Old Bones was flirting with our boy.

I shared the view of Lucas’s friend–best look away. This is not something easily forgot.

But Lucas didn’t seem to mind. “I guess you were waving at me?” he said. 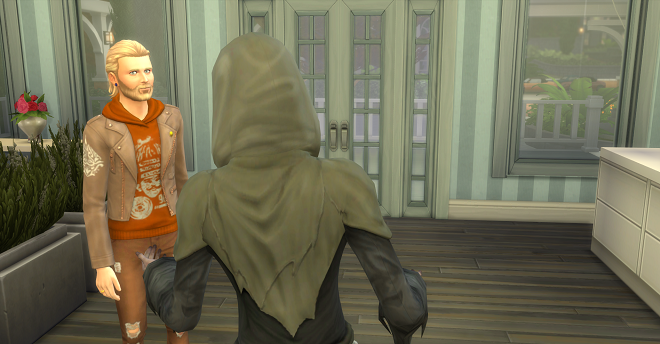 “Thanks?” Lucas said. “I’ve been keeping fit? The dogs keep me busy?”

“But not too busy for an old sack of bone, eh? If you catch my drift…” 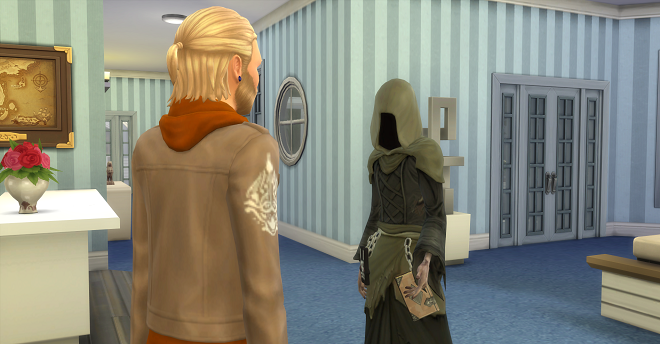 Do I look away, do I not look away? I didn’t look away. I can’t help feel protective of Lucas. I circled around him, whispering, “Isn’t it time to go? It’s time to go.”

“I guess I should be going,” Lucas said.

“What? So soon? But I haven’t even done what I’ve come for!”

“Actually, yes. But you know me. I never mind mixing business with pleasure.”

If the Bones had eyes, he’d have winked.

“Everything all right, sir?” The maître d’ asked.

And then ensued the commotion. A vendor staggered in, gasped, grabbed his throat, his chest, and collapsed.

It was Don, a vendor I’d known from the fish stall on the docks. He’d been a young man when I met him, back when we adopted Otter, all those years and decades ago.

How strange that now he’d be collapsed at Lucas’s feet!

I suppose the world is small, just as they say, and we are all connected. When one goes, whether we’ve met that soul or not, it’s only a few degrees that separates us from someone who knew them. We are all connected, and the passing of one affects us all.

“You won’t take him with you, will you?” asked Lucas when it was all over.

“Well, yes, that was the plan,” the Shepherd said.

“But you’ve done the reaping, now let him stay with me?”

I felt a tremor. What had Lucas learned, watching me collect the dogs’ spirits all these years? Had he learned that Death was one to be bargained with? That a soul could remain, after the body were reaped?

“If you insist,” Mr. Bones replied. “I’ve done what I came to do. The rest is immaterial.”

He handed Lucas the small ball of light, Don Lothario’s spirit. “Be sure to erect a headstone,” the Reaper instructed. “It’s a necessary portal.”

Then thunder rumbled and smoked swirled.

Lucas added another tombstone to the long row. I swirled around, and Don, when he saw me, let out a hearty laugh.

“I always heard we’d meet old acquaintances!” his spirit said. “Guess what they say is true!”

I showed him around. “You aren’t really supposed to be here,” I said. “Lucas overstepped his bounds.”

“And a good thing he did,” said Don. “I may be ready to try something less corporal, but I am not yet ready for a final farewell.”

Oh, what will Tanvi say when she sees who’s tagging along with me! We surely are a motley crew.

Let the tombstones shine in the setting sun! We spirits have clouds to caper through!