I’ve got from 1.3 to 3.2 million viewers on my various SNS sites–I mean on my own verified sites for Sierra Summer. Yes, there still are fans of old folk singers out there, especially when we get a little politically active and outspoken on social media.

I figure a portion of my fanbase will slide over to support the S-Boys. The hard-core fans will, for sure, those that call themselves MountainHeads.

The curious will at least check out the boys’ teasers and first releases.

And then the fans-who-love-to-hate. Of course, they’ll find something wrong with everything. Selling out. Capitalizing on creatives. Ripping off young talent. Copycats. They’ll come up with something to hate. But that’s part of the plan, too. Fan wars provide the best promotion any producer could hope for.

I’ve been posting teasers since before I started recruiting.

“Something big coming up!”

Everybody started guessing. Most guessed I’d stage a comeback. Nobody guessed boy-band.

On Instagram, I posted a pic of me painting.

“Guess what this is?”

But they’re all still thinking it’s a cover for my own release.

We haven’t yet decided which painting we’ll use. I kinda like the trees, since the album will be called Rainbow Apollo, but Vee-Jay and Akira like the absurd wit of the hat cat and the apple-nose dog.

Who knows? Maybe one of the guys will paint the cover we end up using. I posted this teaser of Joey with the caption, “More than one painter in the house.”

Akira’s had his V-Live, letting his fans know that something big is coming up. And I’ve been planning the release of teasers of each of the others.

I posted a selfie I took at the computer. I made sure to show Rylan in the background.

“No. That’s not a nephew,” I wrote in the caption. #SomethingBigComingUp.

I posted a pic on Instragram of Tony working out.

“Apollo loves the gym!” I wrote.

I’d let them guess whether Apollo was the godlike man or the sunburst dog.

On Soundcloud, I posted 15 seconds of “You make me feel.” 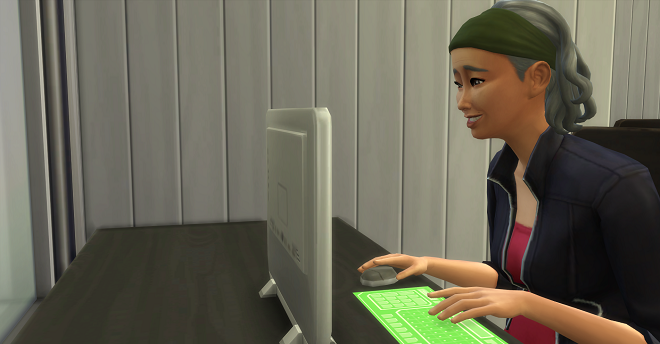 All the comments guessed that this was my backup band.

“If we fail,” Akira said, “maybe we really can be your backup band?”

“Akira!” I called him into the other room. “You can’t talk like that,” I said. “Even in joking. At this stage, you’ve got have maximum confidence. None of these guys have experience, like you do. They all look up to you! If you start doubting yourself, they’ll doubt themselves. Look. Your fans. My fans. You guys are gonna make it! You’re good!”

“You really think so?”

“I do,” I replied. Truth be told, I actually wasn’t sure they were good. But I knew they had something different, something unique. Something no one else could deliver. And right then, when we were gearing up for their debut, doubt would ruin it. “You’ve got be confidence. That’s what the boys need.”

He marched back into the kitchen.

“Heck. We aren’t no backup band, boys. We’re idols. Close your eyes and see it. Dream it, boys!”

“Here’s how it’ll be,” Akira said, narrating the dream. “For thousands of people, our songs will make a difference. Our songs will give them a reason to smile when they wake up. We’ll make them happy on their road trips! We’ll be their soundtrack when they’re doing their math homework! When they’ve got heartache, they’ll listen to us!”

“Well, I don’t know about millions,” replied Akira. “We’re not Sierra yet!”

But I had hopes, even then.

Tony’s voice was coming along.

He was even working on his moves. 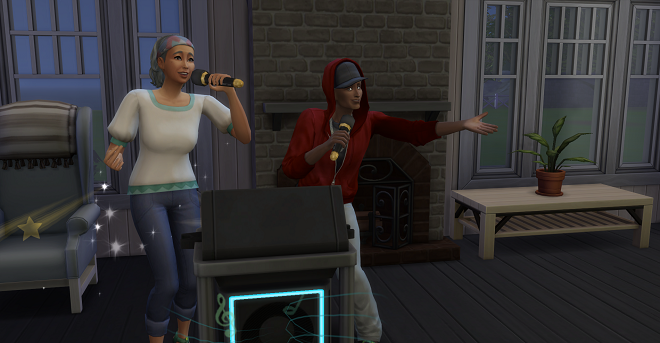 And Rylan? Quiet, thoughtful, sensitive Rylan… he could break a heart with that tenor of his… and then, he’d mend it, on the spot.

Yeah, I was thinking we were just about ready for the fan transfer. And then, we could think about attracting new fans, too. Pretty soon, we were gonna need a name for our fandom. Geekers? Nerdsquad? How about Daydreams!

Author’s note: Hi, everyone! I’m back! I wasn’t really gone… I was just taking a break from Sims and writing. I wrote over 1,200 posts over the past four years! I was due for a short break… I’ve been having fun with ElderScrolls Online, busy with work, and enjoying my garden. Now, I’m happy to be back writing Sims stories. I might be writing an ESO fanfic, too. Not sure how often I’ll be posting, but it’s the enjoyment, not the frequency, right? Happy thoughts to you, and I hope you’re all well and enjoying much-deserved breaks when you need and want them!