The baby’s here. I thought I’d feel jealous. I mean, he got to have what I’ll never have: an actual birth parent. Baby brother got his umbilical the honest way. He was born with it.

We are already talking. True, he mostly communicates feelings, but what feelings they are! There must be nothing more pure, more strong, than a baby’s love.

“Why do you love your big brother?” I asked him.

He cooed and giggled. Then he sent me wave after wave of memories he had while he was inside of Pops of me talking, singing, touching Pops’ belly. Ah, no wonder! We are already bonded. 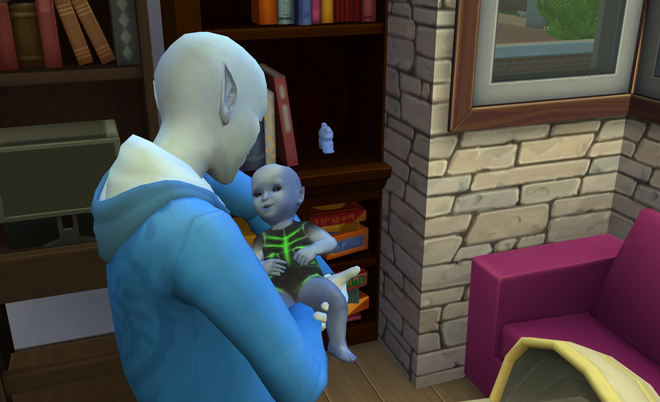 I can’t be jealous of a little guy who loves me!

“You’re gonna do great things!” I told him. “Even if all you do is sit in a chair and think, you’re gonna be great! You are great already.”

I love the color of his skin. It stirs memories in me–I don’t know what memories they are, or where they come from. Some feel like soul memories, from long ago lifetimes when I was blue like that, living in those wide purple meadows, singing with my gojotugo in a circle under seven moons!

Some feel like cellular memories, stirring in the spaces between the nucleus and the cytoplasm. Pabatuotuo awoke this body to the memories of its cells, and now, with this brother, these cells’ songs find lullabies from ages’ past.

It’s like everything I know: How do I know it? It’s lying latent in me, ready to awaken when stirred by stimulus.

The ancient song of wind and leaf:

I have a brother to sing the old songs with, and he is a blue I know in my soul, and he comprehends the old hoploho in his bones, in his cells, and he will sing with me in the spaces we share inside! You were so sad at dinner that I knew my news had to wait. I had to find out what was going on with you, first.

“Wolfgang dropped by today,” you said.

That’s nearly always bad news, as far as I’m concerned. I know you’ve got your reasons for being his friend, but if it were up to me, we’d let him stand on the porch next time he came knocking.

My guesses: 1) He didn’t get into college. 2) His brother Gunther didn’t get his manuscript accepted by a publisher. 3) Lucas joined the Merchant Marines.

None of these were correct. But the news did involve Lucas. You said you were so eager to hear anything about Lucas.

Except this. Nothing could have prepared you for this.

Lucas got married. To Raj.

You said you held it together until Wolfgang left, but once he reached the sidewalk, you lost it.

You nodded. Raj is a nice guy.

“That’s a surprise,” I said. I thought there was something between you and Lucas.

“I don’t know what it is! What’s the word for a bad surprise? A catastrophe?” you said.

Your heart was broken, I could see, and you were angry.

“I can understand that you might feel mad,” I said. “This came out of nowhere.”

“It sort of didn’t,” you said. “I could tell his feelings turned. It’s because of who I am.”

“You mean because you’re an extra-terrestrial?” I asked.

“That’s so lousy. What a stupid bias. How does he know you’re a bizoo?”

You said that he’d come over a while back, and the two of you had been sliding on the slip-and-slide. You were wearing your swim trunks.

“He asked why I didn’t have a belly button,” you said. “And when I told him, he went cold. Clammy. I repulse him.”

I tried to think of something to say.

Nothing sounded right in my head.

“Well, you know. I know this isn’t the time to hear this, likely, but maybe it’ll make sense later. Anybody really worth getting involved with will have an open mind. Your origin won’t be a deterrent. They’ll be able to see you, and how you came to be will simply be part of who you are, not something that puts them off.”

“I don’t think there are people like that,” you said, “besides you.”

You were ready to change the subject. You asked about my news. I took a deep breath.

“Did you know your people came for me last night?” I began.

You were laughing. And we said it together, “A baby brother!”

I realized I have no idea. How long do these things take?

You didn’t have any idea, either.

There is so much I don’t know about this. I think I’m going to have to write Brio.

At least the news makes you smile.

“I’ve got the coolest family,” you said. “What do I need anyone else for? You, me, and pagoto makes three!” 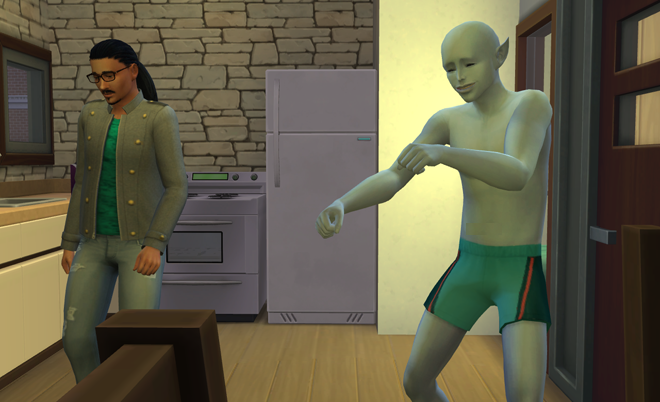 I loved seeing your smile, Sept. You might have a broken heart. You might feel hurt, But we’ve got family. That’ll pull us through anything.