Kristal’s stay was coming to an end. On Friday, the rental service would come to pick up her canvases and ship them back home. She’d arranged for them to be sent directly the the gallery. She’d been in contact with the gallery owner, a friend and former colleague, sending him snaps of her paintings.

“The light’s incredible,” he’d said. “I’ll take them all.” He’d already lined up a few customers who had first bids.

A new career opened, like she’d hoped. Even if she didn’t earn enough to live on through painting alone, it would help, and she wouldn’t have to return to full-time work.

She realized she’d grown homesick when she painted a landscape from the mountains where she’d spent summers as a child.

Her dogs were at the clinic. One had an ear infection, the other an eye infection, and the third, a urinary tract infection, but the vet was administering treatment and he assured her they’d be cleared to return with her on her flight Monday morning.

It had been easy, after all, to select the dogs to adopt. They chose her, in the end. 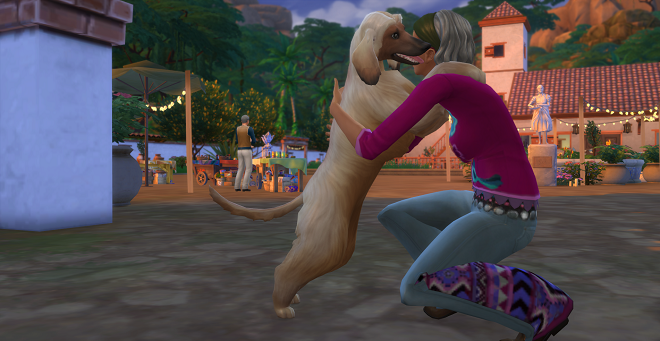 The Afghan was the first to befriend her, following her back to the casita. Then the spaniel, who seemed to be something of a pack-mate with the Afghan, chose to stay with them.

Two dogs? Kristal wasn’t sure she was ready for that. But it seemed cruel to separate them, and her big house had plenty of room. 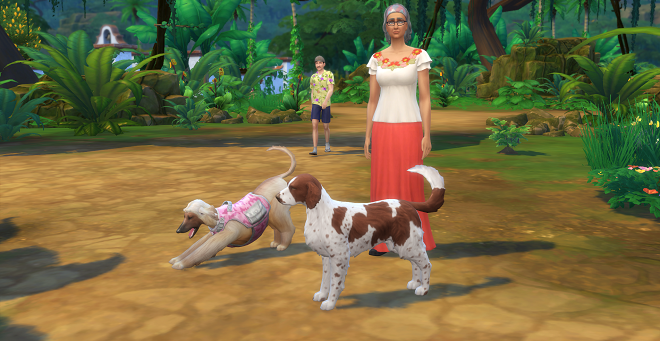 The chocolate mixed-breed began to hang about the casita, too. Could she handle three?

She waited for the chocolate mix to wander off, but she stayed, following her and her dogs to the vet clinic on the morning she took them.

“Might as well come along,” she said, bringing the third dog into the waiting room with her.

The cost of vaccinations, spaying, and the treatment for the infections added up. On top of that, she had to purchase three travel carriers, and she bought three more flight tickets, so the dogs wouldn’t have to be jostled around in the baggage compartment where it was noisy and cold.

Her paintings had better sell! But family isn’t cheap–it’s dear.

On the last weekend, she worked on a small canvas. This one, she wouldn’t sell. This would stay here, hung in the casita, a piece of her to remind her always of where she had changed, a tribute to the something that comes from loss, when we look inside to find what remains.

The colors of the painting danced up from a dark center, rising to open out into something that felt, to her, like hope and a new feeling of home. 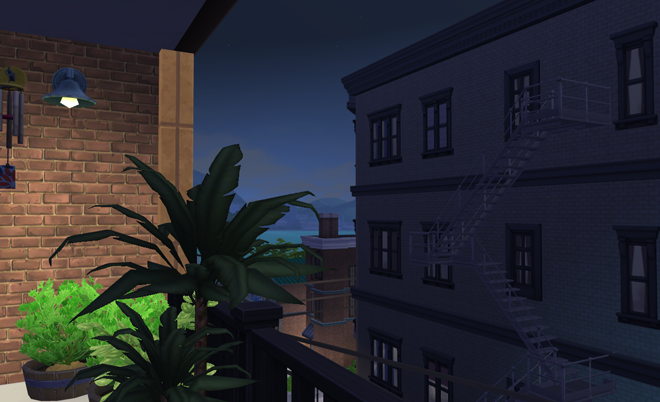 Evenings in the city brought nostalgia. With roughly 837,440 people living in approximately 47 square miles, it seemed strange to feel so alone. But after a day of painting and writing, CT often realized she’d spoken to no one. Surprisingly, when she stood on her balcony looking over the empty streets, no one in the apartment building across the way ever looked out at her, standing there. She felt invisible. Her neighbors in her small town always said hello.

Fortunately, her work drew her outside many nights. She had festivals to cover, new musicians to discover, and gallery openings to review.

Walking out of the Art Center, the night air felt bracing. And when she looked up, she was startled to notice that she could still see the stars. It was as if night imposed itself over the entire region. I am Night, more powerful than city lights. You cannot dampen my stars or the depths of my darkness.

And no matter how much noise the city let loose, Night somehow absorbed it all in the silence of its space. 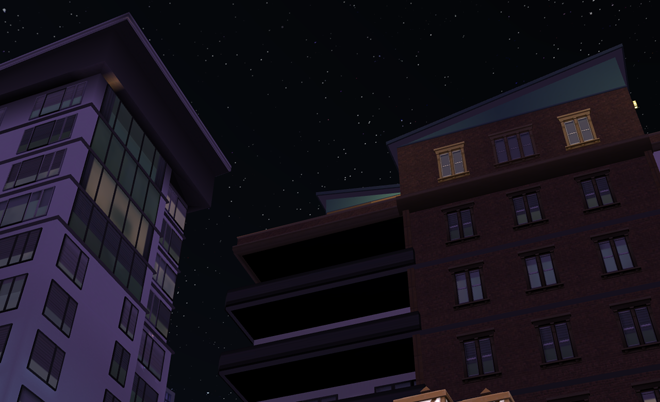 Paper lanterns spread magic through the squares, and the dragon-river mural on the brick tenement seemed enchanted, moving as if it were real.

The reviews CT wrote became touched with this magic. “It’s as if you’re describing a foreign land,” her editor wrote to her in an email. “Why! Your review of the food stands in the Art District garnered 125,062 hits! The commission reports that booth sales skyrocketed!”

“It’s not supposed to be about commercialism,” CT wrote back.

“Yeah, keep believing that  :),” the editor wrote in his reply.

CT longed to bring a bit of enchantment into her apartment. She picked up gallons of casein paints and began a mural on the studio wall. The sweet scent of caseins relaxed her. She was so focused on her painting that she didn’t hear the knocking on her door.

Her landlord let himself in with his key.

“Anyone at home?” he called. “I am here to check the suspicious smell in the hallway that the neighbors reported!”

“Back here!” she called back.

“Ah!” Atharv cried. “This is magic! And it smells like milkshakes!”

She apologized. Was the scent of the paints that strong? And was it OK she was painting the wall without permission? And she was sorry she hadn’t heard him knock.

“Too many worries!” he replied. The scent of the paints was not a problem, and the mural added beauty to the apartment, and when one is creating a thing of beauty, one cannot be expected to answer the door at any random moment.

“You’re a kind man, Atharv,” CT said, and he rewarded her with a warm smile.

A few weeks later, he dropped by unannounced late at night.

“I was walking by, checking on the kestrel nests under the eaves of the building, and I thought to myself, ‘Let’s see how that magical mural is coming along on the wall of the studio of my favorite tenant!'”

She invited him in to see the finished work.

“This is magic!” He said. “What do you know about color properties and the ways that colors, when used with skill,  create an environment that can keep a person cheerful?” 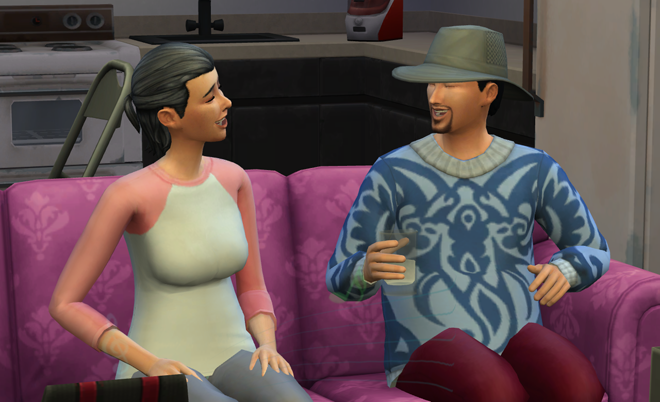 She didn’t know much–only what she’d learned through experience and intuition.

He shared the color principles he’d learned from his grandmother in India, who held that each color carried a specific frequency that affected mood and health.

Atharv told of summers he’d spent as a child on his grandparents’ tea plantation in Darjeeling.

“One summer, a tiger had been seen in the jungle surrounding the plantation. The field hands worried, keeping pitchforks and machetes always nearby. I was a wild thing, spending all my free time in the jungle. One afternoon, I climbed down a vine and there, standing right beside me was the tiger. He looked in my eyes. I looked in his. He saw the light of my eyes. I saw the light of his. It was like that.”

Atharv looked into her eyes so that the light sparked from his irises to hers. 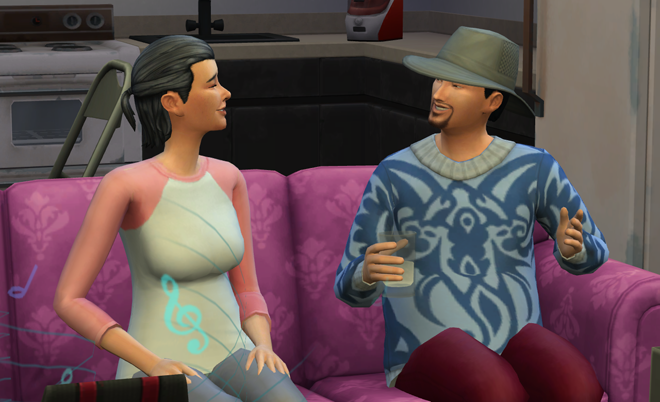 “But I got no peace!” Atharv said. “All the rest of that summer, people followed me everywhere I went! I was the boy who met the Holder of the Disk in the face of the tiger!”

Before the sun rose, the sky turned the color of a ripe plum. Atharv and CT walked out to the balcony, where morning felt cool and fresh.

“How long before this color changes?” Atharv asked, looking at the sky.

“Not long,” said CT. “An instant.” They watched silently. “An eternity.”

This is my first drawing ever.

Me to Tia Berry: What should I draw, Tia Berry? 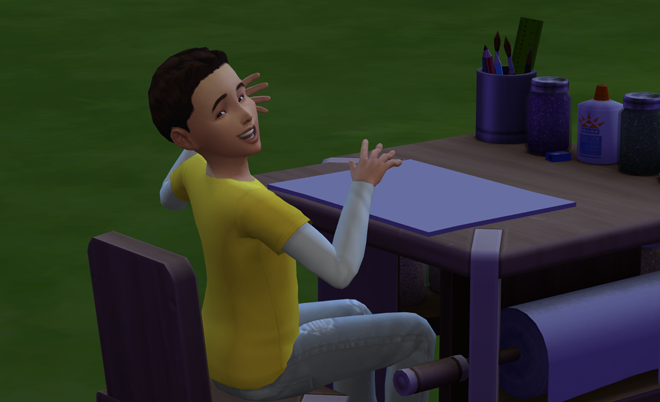 Tia Berry to me: Draw what you feel.

I felt kinda cold. How do you draw cold? A sweater? 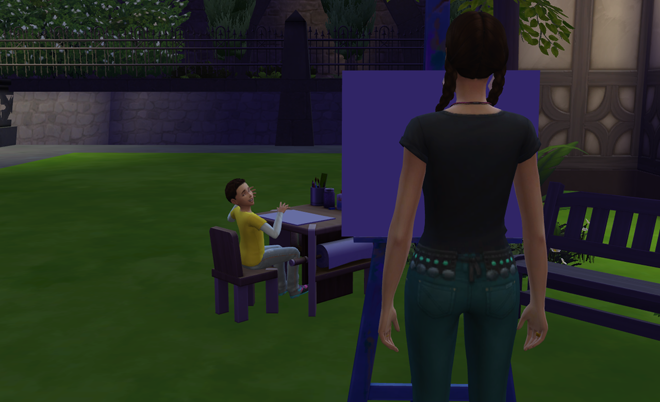 Tia Berry to me: That’s not what I mean. I mean what you feel inside.

Tia Berry starts talking about all kinds of colors like I don’t even know names of. I don’t feel colors inside. I feel hungry!

I want to eat the sky! That’s how hungry I feel! Draw what I feel? Ok, macaroni!

The sky is made of noodles!

Me to Mae: What does it mean to draw what you feel?

Mae to me: Well, I don’t draw, Charlie. I write. I never really write what I feel, though. I write the story. And through the story, I write what other people feel. What the people in the story feel. Me to Mae: Like if they’re hungry, you write that they ate a big old peanut butter sandwich?

Mae to me: Not exactly! But it would work! If I could draw what I feel after eating one of Tia Berry’s delicious and scrumptilicious bacon-better-sandwiches with fries-on-the-side, I would draw happy.

What color is happy?