Lucas (aka Mr. Munch-Rasoya–ha!) “dropped by” today. Wouldn’t you know it, while I, in all my navel-less splendour, was playing on the slip-n-slide.

“Oh, yoo-hoo! Septemus!” He really did say that. Fortunately, I was checking my texts, so I could take a minute to breathe, i.e. stew.

Does he really think he can pop on over like this? Does he not know how I feel about his married self?

I counted to tui.

He looked a little off, actually. And, in spite of myself, I felt worried.

“You doing OK, buddy?” I asked. “You seem sort of drained. Coming down with something?”

“I feel so weird,” he said. “I’ve been like this all day. Since last night. It’s the strangest thing, Sept.”

He told me an odd story. He and Raj took a day-trip to Forgotten Hollow.

“I’ve always wanted to go, ever since you told me about when you went there to meet your little sister, and Rajarooni likes old architecture, so we decided, why not? Fun little afternoon outing.”

They strolled the square, stopped by the library, and then–he can’t remember what happened next. Neither can Raj.

“It was like we just woke up, and we were still in the library, but somehow almost an hour had passed, and–it was one of those weird things.”

He said his arm really hurt. You could barely see it now, but he said that yesterday, it had these weird scratches on it. The strangest thing was how quickly they healed.

“Yeah, you look a little off,” I said. I lied. He looked adorable.

I thought over what he said about his trip to Forgotten Hollow. Panda’s mum felt so concerned when I came to visit–vampire attacks. But that’s not real. That’s just the stuff of late-night movies.

For some reason, Lucas invited himself inside. He followed me into the kitchen.

I wanted to say to him, “You don’t get to look at me with those eyes anymore. And maybe you should wear a hat when you’re around me. And what the yobasko are you doing in my kitchen, anyway, when you know how I feel about the idea of you in a kitchen alone with me!”

But I didn’t say any of that. I asked him if he wanted a glass of water.

Just for a moment, I let myself fall into the sound of his voice. I didn’t fall all the way, just into the vowels, and then I pulled myself out.

“Yeah, I’m sorry I didn’t have a chance to tell you about me and Raj,” he said. “We’ve been sort of seeing each other for a while. You’d like him. He’s a good cook. I like to wash dishes…”

I tuned him out. He kept talking. All I heard was the music. 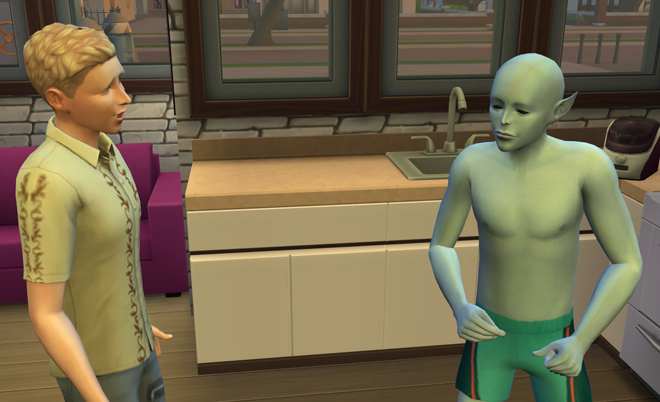 Pops came in and joined us. I shut my eyes and started to singing to my pagotogo. I just didn’t want to listen to him yammering away anymore. I wanted to remember who keeps me grounded: My pops. My little brothers. My sisters. Panda. Panda? 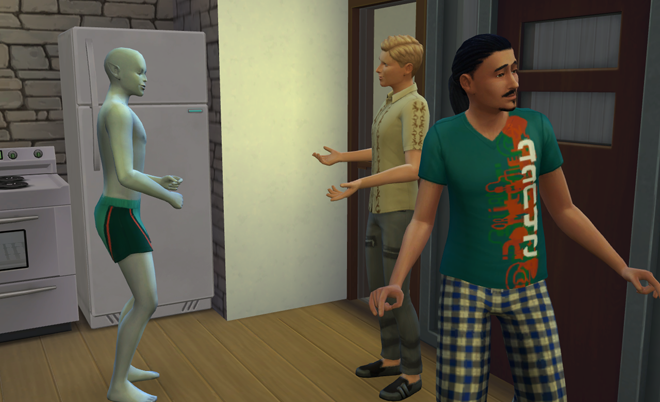 I had a strange image just then, when I thought of Panda, of red, gray, black, and something very warm and very wet. Panda? Are you OK, paPandagoto?

I got an image of her cleaning the bathroom, a little sad, a little quiet, but OK.

He stepped behind me and grabbed a pile of dishes off the kitchen counter. Lucas, why do you have to look so happy, like nothing happened, like you and I can keep on going as if you weren’t married, as if my dreams weren’t shattered, as if everything were OK?

“You’re kinda cute, do you know that?” he said to me. “For a kid. You’re gonna make somebody a fine husband someday.”

OH! Yobasko! Stupid nose! Just go wash your own dishes. I’m not sure I can have you in my kitchen anymore, Mr. Munch-Rasoyo.

Author’s note: If you’re wondering about what happened at Forgotten Hollow during the interval that Lucas and Raj cannot remember, check out this chapter of Pandora’s Box!

“Cowabunga!” yelled Rocket, after he ditched his clothes and ran naked towards the boardwalk in the Spice District.

“Oh, to be three and free!” said their ama. “Shall we join him?” And she made to take off her own shirt.

“No!” yelled Sparkroot and Florinda together, and everybody laughed. Everyone except their ada, that is, who looked on with a scowl and furrowed brows.

When Rocket turned and raced back towards them, their ama scooped him up in her arms and rustled him back into his otter t-shirt and orange dungarees. “That’s my wild child!” she said.

The family crossed the street to the square.

Their friend Semperviren’s grandpa was playing his fancy guitar, and Sparkroot and Florinda danced.

But before Rocket could join them, their ada hissed, “Where do you think you’re going, young man?”

Sparkroot ran towards his brother but was stopped when his ada yelled. “I’ll not have you dancing like a hooligan! You are still grounded for your antics, you renegade!”

Rocket looked up at their ada.

“You’re bad if I say so, ” said their ada. He laughed, and looked down at his youngest son who stood glaring up at him.

Sparkroot thought their ada looked proud. But their ama looked sad, hurt, angry, and disappointed, all at the same time. 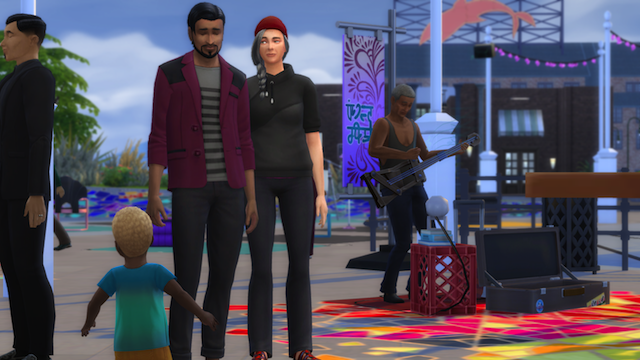 Sparkroot felt the black slug twist and turn and squeeze his stomach, and the badger started gnawing his heart again.

He remembered how excited he’d felt yesterday when he asked Ama if the whole family, even Ada, could go together to the Spice District.

He’d thought out what he’d say so carefully. First, he’d say that it was most fun when they were all together. And then, he’d say that, really, it was good for them to spend more time with Ada, and it was really good when they all spent it together, and couldn’t they please go? Rocket would want to.

After he said it all, just like he planned, Ama was quiet. She still looked at her book, but Sparkroot knew she was thinking.

“I’d be happy to take you kids myself,” she said at last.

And she was quiet for a while, and Sparkroot could see his ama thinking it through, and at last, she said, quietly, “Ok. Let’s give it a try.” 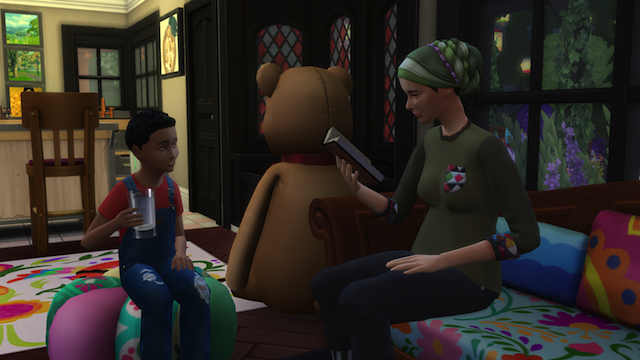 “Sparkie, will you take Rocket over to the vendor’s stall to get a snack? Anything he wants. He’s hungry, and I want to talk to your ada alone.”

She gave him some money, and he and Rocket veered towards the vendor, but slowly, so that Sparkroot could hear what his ama said.

“Brennan, I’m not happy with you yelling at our kids,” she said.

“That’s nothing!” said their ada. “Why! When I was a boy, that would’ve been a sign of affection, of caring.”

And then Rocket ran off towards the basketball court, and Sparkroot had to chase him, so he didn’t get to hear what else they said.

Their ada had left by the time Sparkroot and Rocket returned with their snack.

They didn’t see Ada for a while after that.

Then one afternoon, Ama took them all to Old Town to buy Florinda her first pair of ballet shoes, and when they went into the store to try them on, Rocket began racing around making a loud train noise.

“Do you want to play, Rocket?” Ama asked.

“I’ll take him out to the square!” Sparkroot volunteered. “We can play there while you buy Flor her slippers.”

Florinda stood transfixed by the display of pink, white, black, and red ballet slippers. “They’re so beautiful!” she sighed, stroking the leather of a sky-blue pair.

“OK, Sparkie,” Ama said. “Have fun and meet us by the café in half an hour, and we’ll have bread and chocolate!”

Sparkroot placed his hands on Rocket’s shoulders, and together they chug-chugged out of the shop and onto the sidewalk.

Rocket followed the lines in the pavement, like a good engine, huffing and hooting. And then, he stopped, right outside of the pub.

He ran inside, and Sparkroot ran after him.

Their ada sat on a barstool, talking to Anderson, a friend of Semperviren’s mom.

“You really should take the Loogaroo Express,” their ada said to Anderson. “There are plenty there in Forgotten Hollow who’d like to see you. Plenty.” 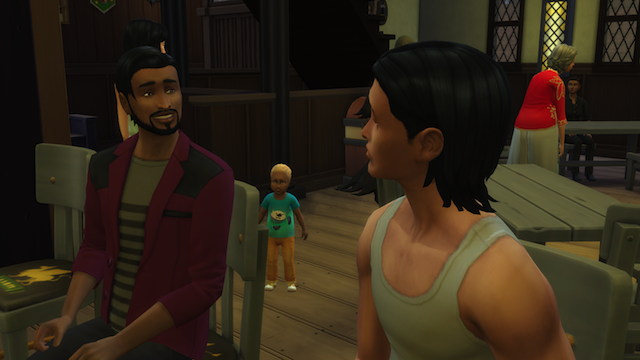 “A young person like you, you’d find a warm welcome, that’s for sure! In fact, there are some unique opportunities there for someone like you.”

Ada turned and opened his mouth.

They saw the hooded man that Rocket and Florinda had met before, sitting in a chair in the corner of the pub. He had been turned towards Ada and Anderson, as if he’d been listening in.

“No-face Guy!” Rocket said, and he ran towards him singing and clapping. “Dance, No-Face!” 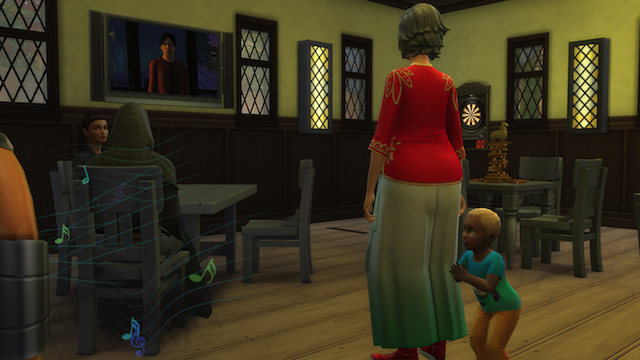 Sparkroot, Rocket, and No-Face danced until Sparkroot remembered the time.

“Bye, sons,” said their Ada, turning back to Anderson.

“No Loogaroo, Anderson!” said Rocket, as the boys left the pub.

When they met their sister and ama at the café, Florinda cradled a white shoe box. “I got the blue pair,” she whispered to Sparkroot.

“Do you love them?” he asked her, and she nodded. “You’ll dance like a princess,” he whispered.

That evening, Miss Penguin dropped by their home for a visit.

“Your husband has done the most amazing thing for this region,” she told their ama. “That Loogaroo Express is the best thing to happen in a long time! Why, I ride it three or four times a week! I just can’t get enough of Forgotten Hollow!” 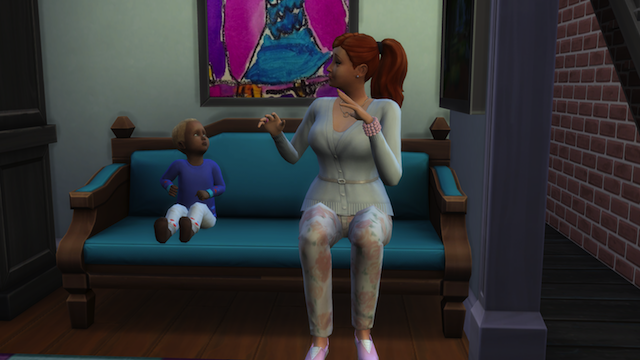 Miss Penguin described the quaint architecture, the dark woods, the interesting people, the culture, but Rocket would have none of it.

Sparkroot had to agree. The train itself was exciting, with the leather seats, zipping speeds, and, of course, the hot chocolate. But he’d be happy if he never set foot in Forgotten Hollow again.

Just thinking about it, connected to Windenburg by the line his ada had been in charge of constructing, was enough to get the badger biting.

He tried to forget about that dark valley, now a short ride away. Especially at night, when he lay down in the tiny room at the top of the stairs that he shared with Florinda, he tried to put the Loogaroo out of his mind.

When he had trouble banishing the image of the train and the valley it led to, he would imagine instead something he’d seen one day when he was walking back home after visiting Sempervirens.

At the bend in the road, he’d come upon his ama, playing on her fiddle a tune that Sugar taught her. He stopped to watch and listen.

It was a good song, full of old-fashioned riffs and turns, and it sounded like a cross between a jig and a promenade. And when he heard it, he felt brave inside and safe.

He asked his ama about the song that evening, when she tucked him in.

“Will you play it often?” Sparkroot asked.

She kissed him on the forehead, and hummed the song as she walked back downstairs to tuck in Rocket, and while Sparkroot fell asleep, he imagined her standing at the bend of the road, playing with all her heart, to keep the bad things out.