“I’ve got a dinner date tonight,” said my patient Bria Louis, “and I really want to go. Will I be well enough?”

“I think so,” I replied. “It’s just the early stage of a virus, and our herbal remedy seems to kick it out in an hour or two. See how you feel, and if you feel great, that means that the reishi and shiitake did their job, so you’d be good-to-go! If you feel a little tired or still have a sore throat, which is unlikely, then I’d suggest you rest up and postpone your date for another day.”

“I really hope the stuff works,” Bria said. “It’s not like it’s a romantic date–it’s just with a friend. But still. She’s an important friend, and you never know when a friend turns into something more.” I thought about what she said while I was on break. I don’t really get what more there is than friendship. To me, it seems like everything.

The day went well, but I still felt a little stressed and tired when I got home. I turned on some music and danced before I even showered.

Then, I heard some static from the living room and I noticed that the stereo was broken.

After fixing it, I showered and headed out back to the pool. There’s nothing more relaxing than a quick dip at sunset. When I got out of the pool, my phone rang. It was Sonia Burgos, whom I’d met at the café the day before.

I was hungry, and Sonia seemed like a nice, friendly person, so I said sure. I kept wondering what she meant that she couldn’t stop thinking about me. I finally figured that she was probably interested in my research.

I wore my “remember-not-to-take-myself-too-seriously” outfit. I didn’t want to bore her by going into more details about applanoxidic acid A than she really wanted to hear. When I’ve got my blue glasses on, I remember to toss in a joke now and then, rather than just rattle on as fast as my brain will take me. In the restaurant, I saw Bria. So she’d made it to her dinner date, after all, and her date was Yuki. They seemed to be having a good time. I didn’t even know they knew each other!

I laughed. “Nothing like bringing the office to dinner!”

“Mushrooms are fascinating,” Sonia said. “And I mean not just mushrooms, but all types of fungi, especially the mycelium.”

“Are you ready to order?” said the waitress. “The special tonight is smoked chanterelles on a bed of braised kale with pureed fig compote.”

“We’re skipping the mushrooms,” said Sonia.”I got a feeling that’s all we’re gonna be talking about tonight, and I don’t want us to be eating our words.”

We did talk about mushrooms all night. Sonia explained that the mycelium form a network of underground threads connecting all the plants in a forest community, and along those pathways travel chemicals which allow the plants to share information with each other. In other words, mushrooms facilitate plant communication.

Talking with Sonia reminded me of talking with Tia Berry. We could talk for hours and hours, exploring a subject from all different sides and angles.

I think I could be great friends with Sonia–and, after all, what is better than friendship? 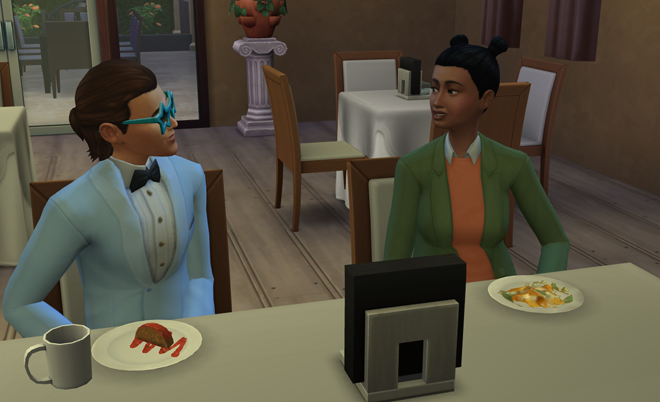 “How was your date?” Shea asks.

“Awful,” I say. I tell him about the rainbow, the geese, and feeling the hills receiving the universe’s kiss, and then about how Cid yelled at me when I told him about that.

“It sounds like a beautiful experience,” Shea says, “like transcendence and inspiration wrapped up in a lettuce leaf, just waiting to be devoured!”

“Cannibal,” I whisper, and Shea laughs.

“Look,” he says, gesturing towards the squirrel who plays by our feet. “There’s eeeIIshiiiiimaaaaiiioh.”

“Do you have a Plant name?” I ask, as we play hacky sack.

“Yes,” he says. “Do you want to hear it?  ooOoooshaaaaamayyyyiiiiiiiopapa.”

“Chemical. Feel…” and he emits a phytohormone wash that makes me feel like I’ve just stepped into a home made of light.

“This is how I feel every time I walk in the forest or among the plants in my garden.”

“That’s because the trees and plants know your name,” Shea says. “They greet you when you walk among them.” 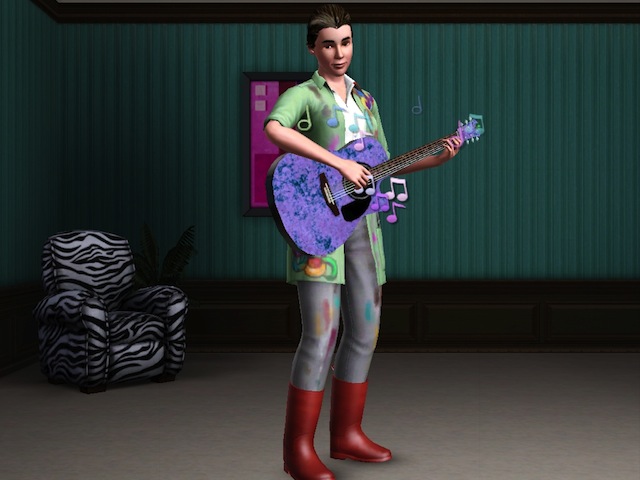 Before bed, I play the guitar, making up a song. Plant talk is like music, vibrations through the air, available to all who might receive them. I wonder if maybe I’ve been listening to Plant all my life, and just didn’t realize it.

In the morning, Shea tells me that he dreamed of eeeIIshiiiiimaaaaiiioh.

After breakfast, as I’m heading upstairs to my room, I see Shea and one of our dorm mates in the front room. He’s blowing her an alkaloid kiss. 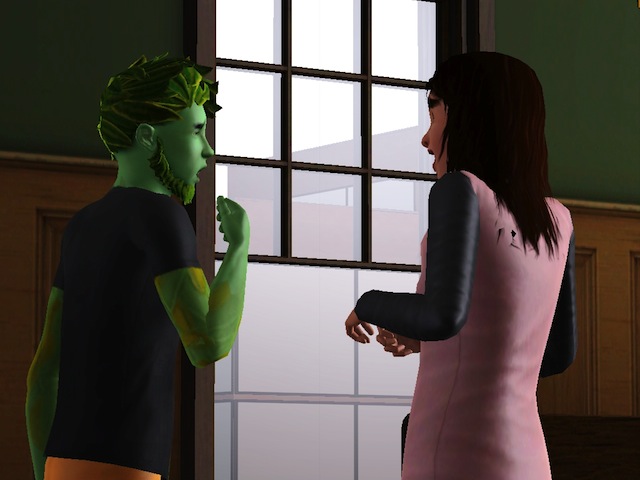 She seems to like it and they lean in to each other. I tell myself, “Don’t get upset. It’s not like Shea’s your boyfriend. He’s just your best friend.” 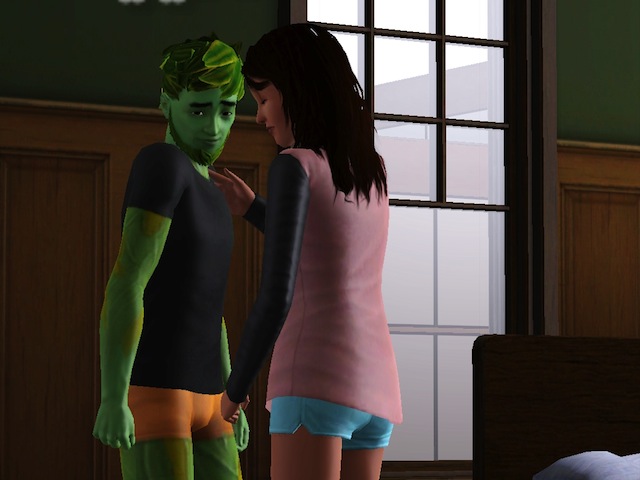 “Do plants marry?” I ask Shea when he and I play frisbee in the parking lot.

I think about it.

“The males just broadcast their pollen out for any open flower to receive,” he says. “That’s not exactly the type of thing that a marriage can be built on.”

Later, when he blows me a kiss and I feel my alkaloid high starting up, I remind myself that it’s different for plants–it’s not like it means anything.

After supper, when we’re heading out to play more frisbee, Shea says, “So, yeah. Plants just like to broadcast their love widely and freely,” he says. “But that doesn’t mean that we don’t have special relationships.”

“So if spousal relationships aren’t the special ones for plants, then what are?” I ask.

I think of mesquite trees that offer shelter to young saguaros, beans that climb up cornstalks, mugworts that thrive beside nettles.

I shake my head. 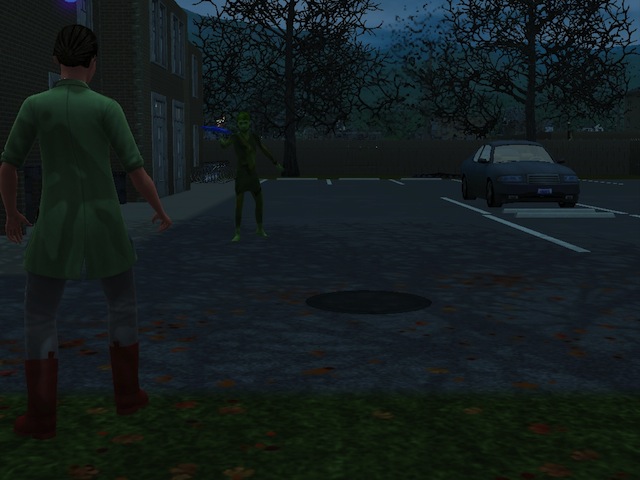 When we head inside, I get a text from Anoki. He’s having a party and he wants me to come.

Riding over there, I think about friendship. So, I’ve got two best friends now, Shea and Anoki, and they both seem to actually like me. Now that I’ve got best friends, I don’t feel like anything’s missing in my life. Maybe I don’t need romance. Maybe I’m like a plant, and friendships are the special relationships for me.

Anoki’s party is a swimsuit party. As usual, Anoki is surrounded by women, this time, by women in swimsuits, and I can’t even get close enough to say hi.

As I’m leaving, I get a phone call.

I’m trying to think who Ray Wise is.

“You know. I met you at one of Anoki’s parties?”

OK. I figure it out real quick. Little guy, glasses, kind of a nerd. Nice guy.

“Anyway, I wanted to know if you wanted to go out.”

“OK,” I say. I’ll never know how I feel about romance if I don’t give it a try, after all.

I meet Ray outside the comic book store. 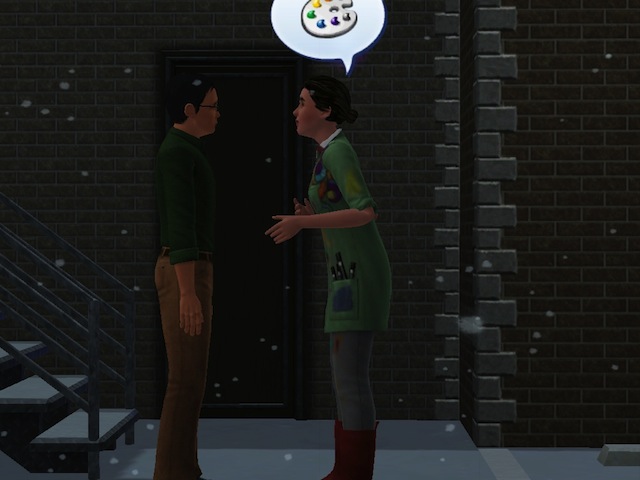 “It’s so beautiful, with the snow falling,” I say. “I could paint a landscape from this.”

We end up talking for a few hours. I don’t know that there’s much romantic potential there–I can’t imagine myself with somebody who hates art. I mean, I’m an artist! But Ray is a nice guy to have as a friend. I can always enjoy somebody that I can talk about books with for hours on end. 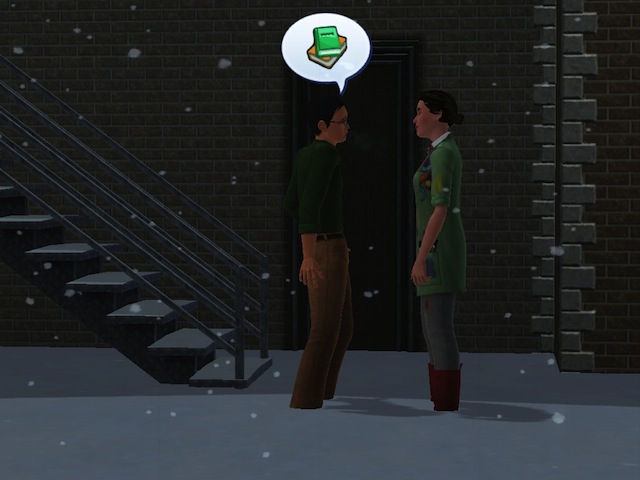 Then, just as I get ready to ride back home, Ray leans in and says, “I’m thinking of something. Fireplace, thick volume of Dickens, and you.”

Was that a flirt? 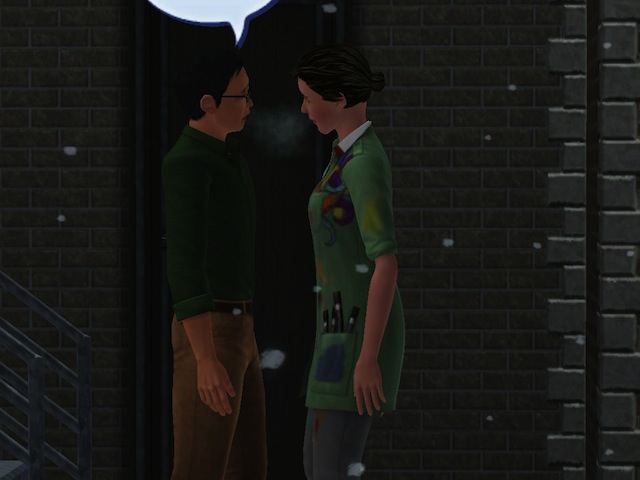