The next morning, Salix was working in the garden when Ted walked by. He was walking a little more slowly than usual, but Salix was so happy to see him that she hardly noticed.

She rolled the wish to ask him to be her boyfriend. He confessed that, because he was so much older, he didn’t feel it was fair of him to ask her, but it was something that he’d wanted and had hardly dared hope for. He was so grateful that she asked. Of course, he agreed. We have an extra cup of youth potion on hand. We were saving it for Miracle, whose birthday is the next day. But maybe Salix will want Ted to move in, and maybe, if we work really hard, we can earn enough points for another cupful before it’s too late.

Salix wanted to ask her new boyfriend for a date. After this date, she’d complete a milestone for her soulmate aspiration.

They settled for another home-date because Sugar was busy composing a piece on the violin and I wanted her to be able to continue working on it.

The date was mellow and happy, and I could see that Salix was falling more and more in love with Ted. It looked like he’d be moving in soon–maybe as soon as the date was over.

And then we heard the Reaper’s song. Ted stopped, with that look, that shrug, that abandoning moment that opens up the door so the black shadow can creep in.

Stop! I wanted to yell. Follow Salix! Go hang out by that crazy little brown jug so the two of you can be playful together and you can finish up this date with a gold medal and move in! Let’s start something, Ted!

But it was too late.

It’s spirit-purple all over again.

We have another chance, right? Salix will plead, the Reaper will take mercy–because it’s new love, right? New love always triumphs! We’ll drink the youth potion, they’ll become best friends, they’ll get married quick as can be, they’ll have a nooboo–even two? And the lineage will continue.

I almost couldn’t get Salix to stop mourning in time to plead, but she pulled herself together.

She gave it everything she had. She listed all the compelling reasons I listed above. She poured out her heart. She used her full 10 points of charisma skill, and her romantic nature, and her soulmate aspiration, and she moved my soul.

“You should have thought of all of this earlier” was the reply.

Of course we should have. You think we don’t know that? You think we’re not already saying all over in a hundred different ways, “What if?”

“What if” doesn’t count. “Should have” doesn’t matter.

It was that light she’d loved, all along. She knew that now.

I didn’t mean this to be sad. Haven’t we had too much sadness lately? Isn’t this supposed to be about the time when we start having happy chapters for a while?

“He was my first love. There’s so much that would have been.”

At least the game has a sense of humor, even if ours is stretched a little thin.

And at least the Reaper had a good time, as he always seems to when he or one of his many brothers stops by the Boughs.

The Reaper enjoys the Game of Death

Salix returned to tending the garden. Keaton, that mailman that I like, stopped by. He had so many ideas about his new music compositions and his paintings that he wanted to share.

Salix did her best to listen. It was hard to concentrate. 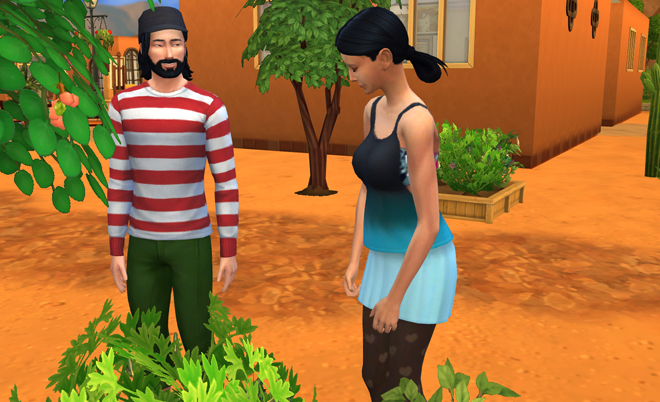 “You seem a little preoccupied, Sal.”

Something about having witnessed Ted’s death and seeing Sal’s valiant attempt to plead for him gave Sugar a new resolve. When Poplar began insulting her taste in clothing, Poplar insisted that she stop and told her that she wouldn’t put up with that anymore.

“There are limits,” said Sugar, “in families as between anyone. And I won’t have you insult me, Salix, Miracle, or our guests. Enough is enough.”

Poplar was surprised. No one had ever stood up to her before. She’d always assumed that other people appreciated her honesty.

“I’m sorry,” she said. “Genuinely. I can’t guarantee that I won’t do it again, for old habits die hard, but I’ll do my best to respect your limits.” 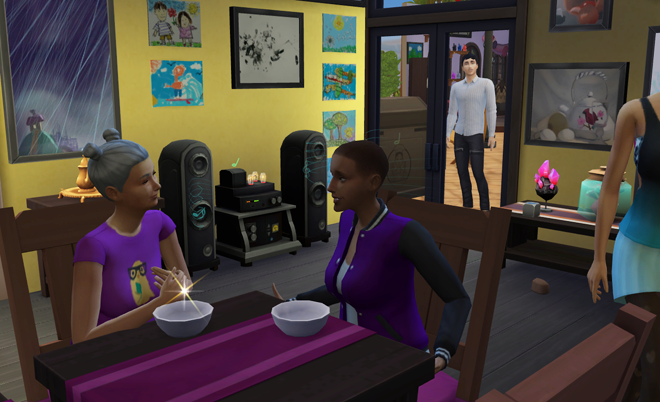 Quinn dropped by that evening. Salix shared her sadness. It didn’t really help much, but it didn’t hurt.

“I can see your heart’s broken now. It’ll mend.”

“When I feel sad,” Quinn said, “I try to listen to music. I let it fill me up, and then pretty soon, I’m so full of the music, there’s no more room for sadness.”

“Just let the music full you up!”