The small emporium was for sale–stock and all. This was a godsend for J.P., since recent zoning changes prevented him from setting up shop in the abandoned gallery across the street that he’d reclaimed for his residence. He’d planned on living above the gallery, but when he went for his business permit, they informed him that since that was his primary residence, he couldn’t open retail space there.

The place across the street would work, though. It, too, had a shop-owner’s apartment above the store.

The apartment had been used for storage by the previous owners, but a few cans of paint, some new kitchen appliances, some garage-sale furniture, and it would be cozy enough for breaks and on those long days when J. P. felt too tired to walk across the street to his “primary residence.” After a few days of hard work getting the upstairs apartment ready, hanging the art, and dusting off the old stock, J. P. was ready for the opening.

He combed down his Mohawk and tied it back into a bun. No need to risk poking customers with big spiky green hair, he figured, just in case the store got crowded. 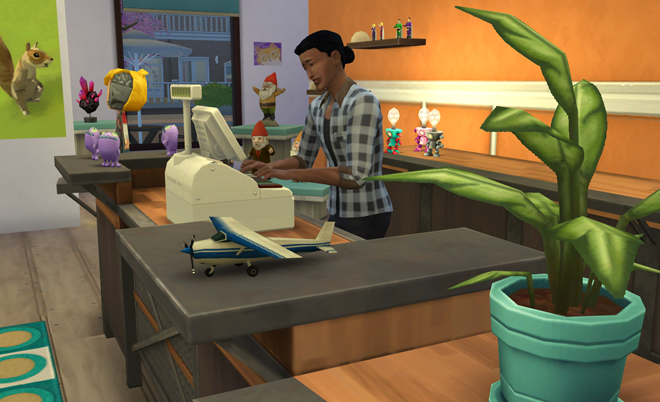 He powered on the Open sign, sent out a few tweets, updated the Simbook page, hired a barista for the espresso bar out front, and he was ready. The Family Gallery was open.

Cathy Tea, who took the opening shift at the espresso counter, was there to welcome the first customers, Grim and a neighbor. 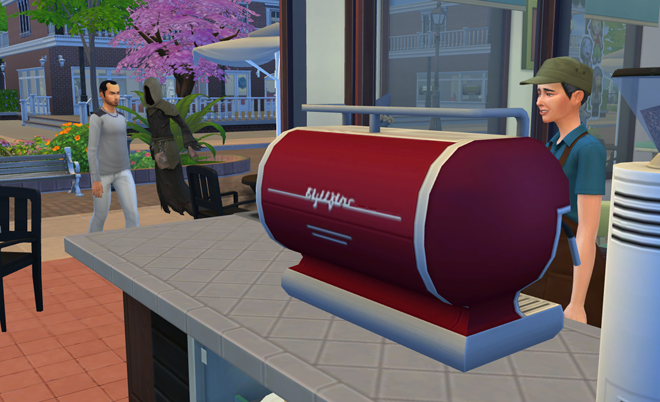 Sugar, the third one through the door, wondered what kind of omen it to have Grim as a first customer.

It would be all right, she figured. This was art that transcended time, space, and generations.

“It’s beautiful, J.P.,” she said. “The selection of work, the installations, everything!”

“Thanks, Aunt Shug,” he replied. “I’m really glad you like it.” It was all the family’s work displayed around them, a few generations of brilliance.

J. P. found himself standing in a circle of customers, as if they expected him to say a few words. It was the opening, after all, he realized. He hadn’t prepared a speech.

“I come from a family of artists,” he said. “Growing up with them, I realized soon it wasn’t just artistic talent that made them artists. It was vision, a way of living. We kept all their work–that is, what we didn’t sell– down in a basement, that hardly anybody ever saw.”

“I’ve seen it,” said Grim in his rumbling bass.

“True. I should’ve said, ‘hardly any living soul ever saw.'” 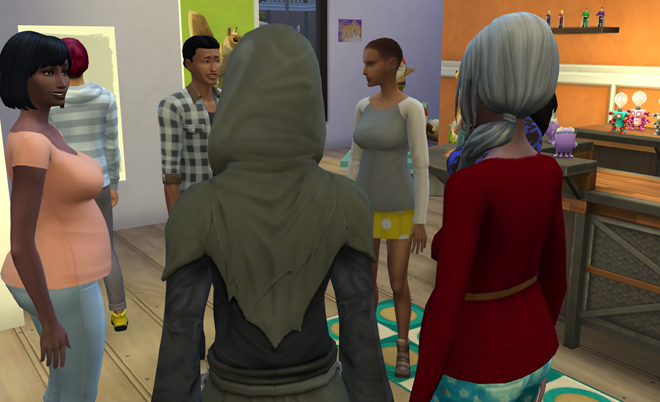 “Anyway,” J. P. continued, “I always figured that it would be nice to share this work. Why not make copies to sell to the world, so everybody can have their own Bough print on the wall?  I’m hoping some of the magic, some of the special way of viewing life and of living, that my family has will come through these paintings.”

Cypress arrived just as her brother was winding up the speech. She felt so proud seeing her aunts’, parents’, and grandparents’ work displayed.

“Not a bad legacy,” said her friend Grim.

Soon Sharon Pope called over to J. P. “Can you ring me up?”

He grabbed his tablet and headed over to complete the first sale.

“I’ve been looking all over for these gnomes,” Sharon said.

J. P. had to stifle a snicker. He’d kept the old merchandise as a joke, a hat tip to the store that had been here before, and he hardly expected anyone to purchase these trinkets.

One man’s junk, he thought, as he rang up Sharon’s treasure. 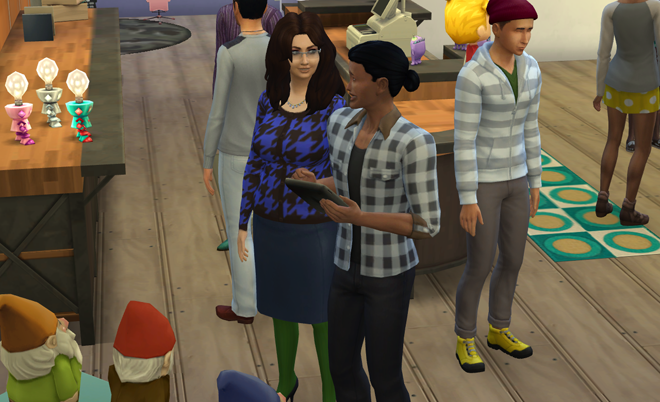 J. P. was just about to ask where Grim would hang it, when he decided better. No need to put a customer on the defensive. “I’m glad this squirrel will be finding a good home,” he almost said. But at the last minute, he simply thanked Grim for his purchase and rang up the sale. 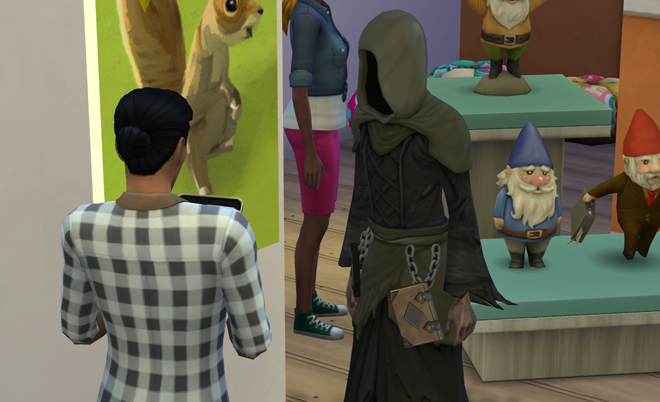 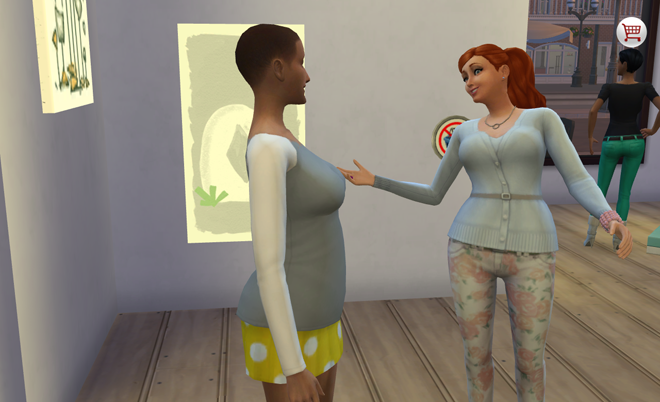 Cypress decided that one of the gnomes would look great in their garden. It took so long for J. P. to finish Grim’s sale that she just about left her purchase for another day, when J. P. ran over.

“I’m so sorry, Cyp,” he said. “That was the weirdest sale. Look, just take the gnome. It’ll look great in your garden.”

But Cypress insisted on buying.

“I want to be one of your first customers,” she said. “Please?”

Sugar also wanted to be one of the opening day customers.

“But you painted this painting, Aunt Sugar,” J. P. said.

“Yeah, but this is a print! We can keep the original in the basement, but I want a print for Ren. She loves this painting, and it’ll look great in our kitchen.”

The store was still packed with customers after midnight. J. P. barely had energy to stand. It had been a great opening day, but he was simply beat. Hungry, too, and his deodorant was starting to wear off.

“I stink,” he said, as he made his way up to the apartment. 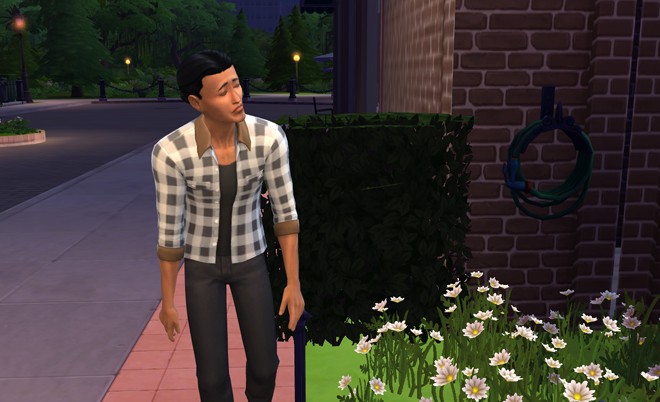 The next morning, he woke feeling starving, but enthusiastic. The apartment felt even better than a second home. It was a cheerful, cozy, and restful sanctuary.

He spent the morning restocking items. Maybe he’d leave the place closed this day and use the time to complete the inventory. But when he checked his twitter account, he found that his tweets had been retweeted, and people were asking about hours and new shows and wanting to find out when they could buy their own Bough.

Sales had been so good the first day that he hired a manager. Rae Rei showed up, along with Miss Penguin as the day’s barista.

“Rae,” he said, “I’ve been looking over your resume, and I’m lucky to hire you. You just do whatever you think we need to make this place run smoothly.”

“Tell you what,” Rae said, “if you’re open to listening to ideas, I’ll be open to sharing them!” 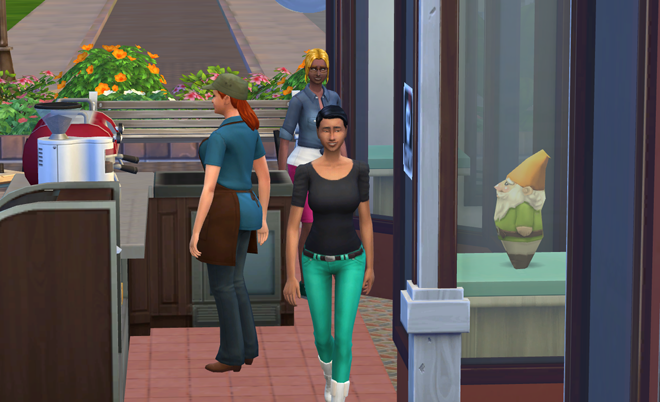 “This is such a cool store,” she told her brother.

Most of the same customers had returned, and they were all looking to buy.

Rae and J. P. ran into some confusion with ringing up sales. Did she have that customer, or was he waiting for J. P.?

“Tomorrow, let’s have one of us stock and the other handle sales,” Rae suggested. At the end of the second day, J. P. was as tired as he had been the night before when he finally made his way up to the apartment. But he was also a lot happier. He remembered what Rae had told him: “We learn by doing, J. P. We can’t expect ourselves to be master merchants instantly. But we’ll get there! We’re smart! And we’re a team.”

He loved his team: baristas, sales manager, and all. And he loved his customers, too: family, friends, and the friends he hadn’t yet met.

Running a store might not be as fun as just hanging out all day, but dang! It sure felt satisfying, especially when he got to share his family’s work with the world.