A few days before her young adult birthday, I noticed that Salix seemed to be especially enjoying the company of Minsk, one of Poplar’s childhood friends. Whenever he was around, Salix had a huge smile. And Minsk, who had never indicated romantic interest in anyone before, began showing up flirty. Maybe he knew that Salix’s birthday was just around the corner.

“I do like doing homework, Minsk! I find quadratic formulas fascinating.”

Ever since Poplar befriended him in the park while achieving her social butterfly aspiration, Minsk has been a favorite of mine. As a little boy, he had the highest squeaky voice, big over-sized glasses, and bright yellow rain boots. Plus, he loves the outdoors.

We moved him and his mom and sister into a house, along with Poplar’s other childhood friends, just like we did with all the wiener-head boys that Aspen befriended, so they’ll be around as lifetime friends. Like Aspen, the wiener-heads have entered their elder years. But Minsk, who’s younger than Poplar, will have his adult birthday the same day that Salix becomes a young adult.

I’d always secretly hoped that Poplar and Minsk would get together. When she rolled the Mean trait, it became clear that it wouldn’t happen. She was passably pleasant to him when he’d drop by, but it was obvious that there was no magic. He also seemed to know that the best way to protect himself from Poplar’s scathing tongue would be to maintain a little distance.

So when he started showing some interest in Salix, I started getting my hopes up–especially when she seemed to have her own schoolgirl crush on him.

Look at those smiles! And the physical proximity! And they can’t take their eyes off each other.

“I hear you have a birthday tomorrow, Salix. Funny thing–I do, too. We might be at different stages, but at least we’ll both be adults!”

I love the way that Minsk looks at her.

“Argh! Once a pirate, always a pirate!”

When he left shortly after Aspen’s birthday party ended, Salix looked so sad. Guess she wanted him to hang out a little longer.

No need for sadness–he was back within half an hour!

He hung out with the family while the sun set and the moon rose. 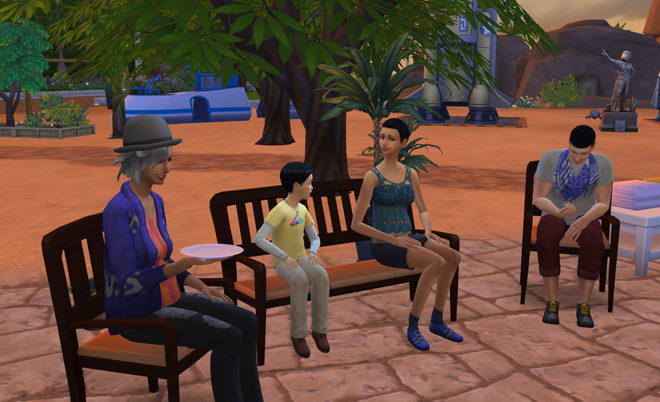 “This is about the best ending to a birthday I could even imagine.”

It was one of those long sweet Sims moments, when everybody’s relaxed, feeling good, and enjoying each other’s company. All the Sims are happy, and all’s right with the world.

“Aunt Aspen? It’s sort of like I live here, isn’t it? I mean, I’m right across the street, and I can come over any time!” | “That’s right, Irving. This is the family house, and you’re family!”

I was starting to think this was going to be what life at Cradle Rock would be like for this generation–Cousin Irving coming over to hang out every night, Minsk looking adoringly at Salix, and all the family sharing stories and sharing jokes. Good times.

Remember what I wrote a while back about the sweet moments? Yeah. As soon as I realized just how sweet this moment was, I remembered that the realization signals its passing. This isn’t the way it will be from here on out. It’s one sweet evening. Share the gratitude, sip that sweet nectar, let it go. What’s up next?

“She’s got to make her own choice, Cath. Don’t make it for her, no matter how sweet it seems to you.”

The next day was Salix’s and Niko’s birthdays. And Minsk’s, too.

Poplar and Aspen greeted the morning by dancing on the patio.

And when Poplar went to work, and Aspen started baking the cake for the birthday, Salix came out and danced alone, enjoying the feeling of movement on this day that would bring her to the next stage.

Of course we invited Minsk to the party. 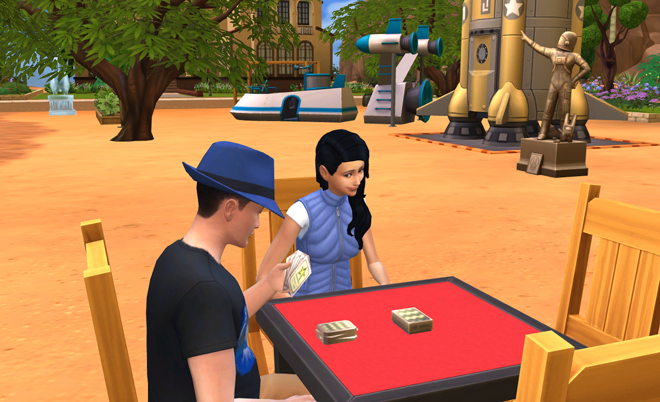 “How do your cards look, Minsk? Can you read the future in them?”

We invited all the family from across the street. Daryl’s never been back since the day he yelled at Grim, and he didn’t come over for the party, either.

But this handsome young man in green did.

“I had a birthday, too! Do you recognize me?”

And this handsome young man is none other than Irving Bough! Can’t wait to find out his teen trait! 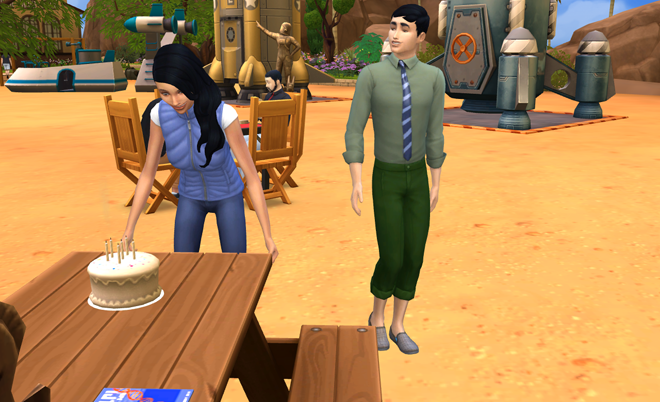 Of course, you know what we’re wishing for. A trait that begins with the letter G…

Salix rolled materialistic. That’s a new trait for the family! Not the worst, I suppose. Salix isn’t quite sure what to make of it. 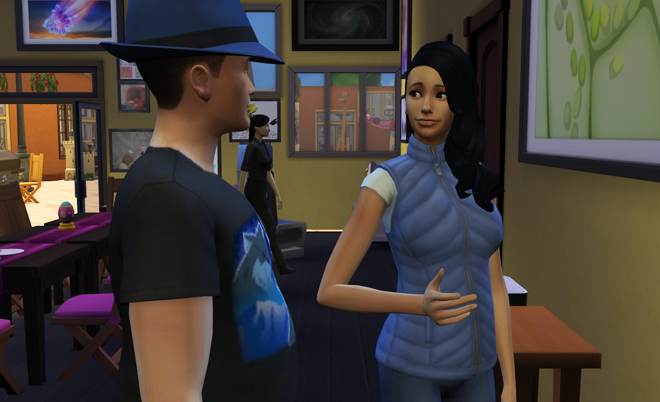 I’m wondering if perhaps the reason that she had such a crush on Minsk was because she has hidden “Loves the Outdoors” trait and she felt, like I did, that it would be her natural adult trait. Gaining the materialistic trait changes this. Minsk is ambitious for one of his traits–and it seems like that would be compatible. But Salix feels she needs a little time to discover what her feelings are now that she’s entered this new stage.

“I’m just not sure what I’m feeling right now. This sort of changes things.”

Over a chess game, Salix and Minsk became best friends. They celebrated with a hug, and looking at Minsk’s sweet face, I could see that his feelings hadn’t changed.

What a good heart Minsk has!

While Minsk and Salix were becoming best friends, it was time for Niko to join Aspen in elderhood. He gave the cake his typical Niko sideways glance while Mesquite looked on. 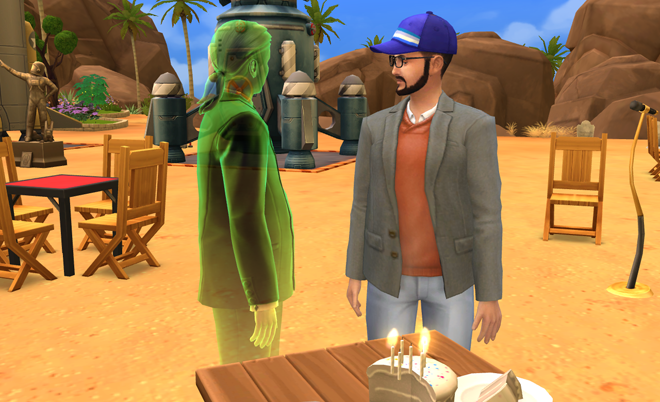 Niko is wondering if an already sliced birthday cake will work just as well–will his wish still come true?

And with the other mailman looking on, the mean mixologist throwing confetti, and Mesquite blowing the birthday horn, Niko spun around into elderhood. 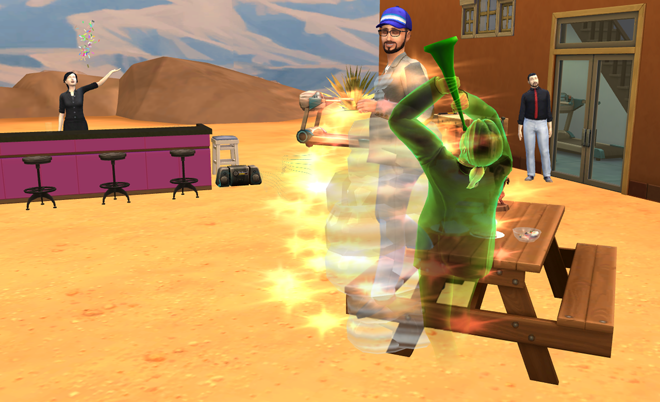 As the party ended, Sugar Maple came home from school–with an A! She completed her Whiz Kid aspiration! Over the weekend, we took advantage of the interval when we were waiting for the A by giving Sugar a head-start on rambunctious scamp. She was able to finish it within a few hours! And now she’s got three days left of childhood in which she’s going to work on the artistic prodigy aspiration.

About an hour after the party ended, Minsk dropped back over, feeling very flirty. Salix seemed happy to see him. They enjoyed their favorite pass-time.

“Do you like the black side of this position, or the white side best?”

Romantic Salix had a whim to flirt with someone, so we ventured a flirt with Minsk. 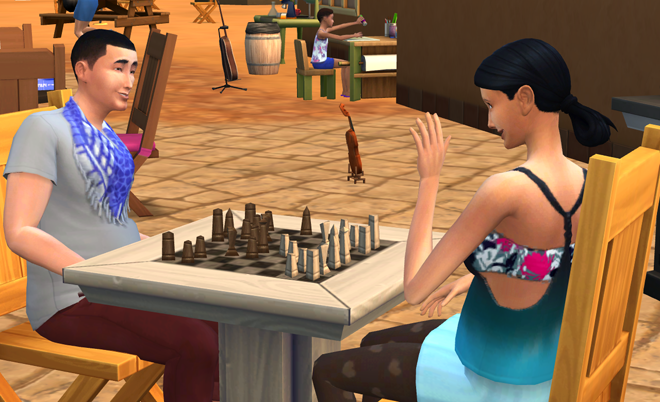 “You look so smart when you’re studying the next move!”

And then the two started batting flirts across the board as if it were a badminton court and their attentions were the shuttlecock.

Minsk really likes it when Salix tells stories with enthusiasm.

Salix told stories, Minsk complimented her appearance, she joked about his scarf, and he just about blossomed with happiness.

“You’re so cute when you tell stories!”

And about this time, Salix rolled the whim to flirt with… Eugene. Eugene? Who?

Eugene is another of Poplar’s childhood friend. Cute. Nice. But I’ve never really noticed him much. Salix, however, has.

Oh, boy. Romantic complications! Of course, it’s got to be Salix’s choice. And perhaps, rolling the materialistic trait has changed the chemistry between her and Minsk. But it looks like he’s already so smitten with her! And he is such a great guy.

After Minsk left, we invited Eugene over. He didn’t arrive flirty. He arrived very energetic.

“Hey, maybe we could work out together!”

Salix tossed out a flirt. He didn’t reject it. But he did immediately launch into a pep talk. Salix thought that was pretty exciting, if a little intense. They’re both active. 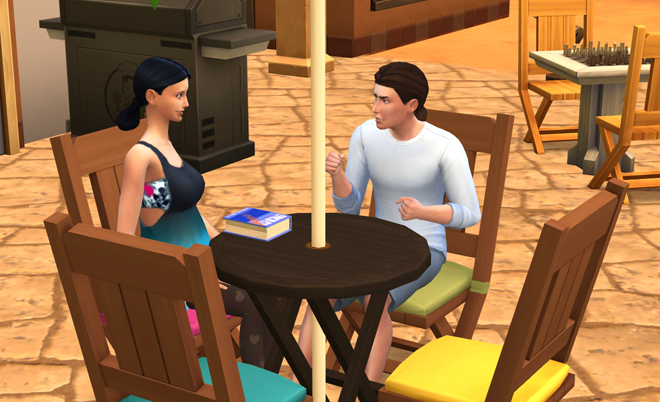 “Don’t just work out once! Work out twice! When you’ve hit the edge–push it! You can do it!”

Salix looks like she finds him really attractive. I’m not sure yet what he thinks. While they were conversing, he started talking about broken hearts. He and Minsk are friends, after all.

“I just like his intensity. He’s got this energy!”

Well, there’s no rush on Salix’s account. She’s got plenty of time–and we won’t even know if she’s the heir or not until her little sister Sugar Maple rolls her final trait. But if Salix is going to choose someone who’s already an adult, we’ll want to move in that person soon so we can monitor his life bar and have the serving of youth potion on hand when we need it.

“I’m gonna do what Eugene says and push it! Keep working out once I reach that edge!”

We’ll give Salix some time to adjust to her new trait and discover what she wants now that she’s a young adult.

Ever the optimist, I’m still hoping we get a goofball somewhere in the family. Will Sugar be our first exemplar-trait heir?

She’s not counting on it. She’s wrapping up as many aspirations as she can before she becomes a teen in three days.  And Cousin Irving, he assures me that he’ll be around to make sure that everything works out fine, no matter who ends up being the heir and who’s the spare. Like with life, there’s an awful lot that’s not in my control. And, as with life, it’s pretty fun that way.