Perfection isn’t never making mistakes. Even a masterpiece can have a “mistake” or two in it, like a line of gray paint that dripped down where it wasn’t intended. And yet the end result is something better than the original vision–that gray line near the bottom right corner adds movement and defines the focus, and if that “mistake” weren’t there, the whole would be somehow less.

This is the first masterpiece that Chandler has painted. I wonder if he’s telling me he’d like to go to Granite Falls.

We spent the day after Tamarind’s birthday trying to get a feel for how this new trait of “mean” will affect her and her relationships.

She does seem to show a new inner strength–courage, maybe.

She’s wearing her grin at a slightly different slant now.

It’s not too early for her to start looking for potential romantic interests, so when a new mailman strolled past Cradle Rock, Tam jogged out to meet him. I like his little Samurai-style bun. He’s got a cool name, too–Jebediah. Turns out, he’s a genius, a loner, and some other trait I favor–art lover, maybe? I like him. Will Tam? 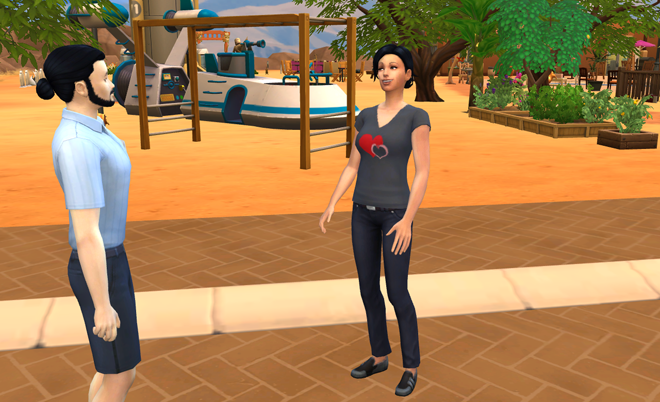 “Yeah, my granddad was a mailman. Great uncle was, too.”

Of course, in the desert, it pours when it rains–we get mailmen monsoons.

The curly-haired mailman is also pretty wonderful: romantic, art lover, and something else cool that I forget right now.

And what about the male maid? He’s got that cute shaggy hair. He’s squeamish–rather an awkward trait for maid, I would imagine. His other two traits (cheerful and creative, maybe?) offset the more challenging one.

Jebediah has a great smile, I think. Sometimes, I wish it were my choice, rather than the Sim’s. 🙂

Tamarind has no problems making friends–she’s got the Super Friendly trait, plus she completed Social Butterfly as a child, so by the time the service sector headed off to serve, Tamarind had befriended them all and become good friends with two. I have a feeling we’ll be seeing a lot of these guys.

Jebediah looks amazing in his off-duty clothes, and I have grown fond of the TS4 squint and smirk.

When Jeb came over after work that day, he could hardly take his gaze off Tamarind, even when he was answering onezero’s question about his preference: mail delivery or intergalactic space travel?

Not surprisingly, he chose space travel.

“Why, I’d choose space travel anyday! Why be pedestrian?”

On the morning of her birthday, onezero made sure she felt inspired: clay and the chicken hat did the trick in no time.

She took the clay into the sleeping room so that Doug Fir, when he woke, could be the first to wish her happy birthday.

It was a breakfast party. Chandler, dancing with his three grown children before the guests arrived, felt a little overcome with gratitude and awe. He and I always think, at moments like this, what if Ted hadn’t died at that exact moment on that date? What if he hadn’t been at the park that day when Salix and Sugar came to make friends? What if Salix hadn’t rolled materialistic but had rolled loves the outdoors instead, which is her true trait, and then she would have fallen for Minsk instead, without doubt? All of these “what ifs,” and each one would have been, for me–though not for Chandler–“perfect.”

But Chandler is here to show me that perfection isn’t necessarily getting what you want, or even what you think might be “perfect.” Sometimes, when it seems that things go wrong and opportunities are missed, something else is waiting that offers a result more miraculous and magical than one could conceive.

Chandler brought into the world the miracle of these three Sims.

The party wasn’t without incident. Tamarind gave in to her new mean trait a few times and mocked the birthday girl’s outfit and insulted her taste in music. I cancelled a few other mean actions, and queued Tam to apologize. Twice.

Just the day before, onezero apologized twice to Tam after a few insults of her own.

They’re still best friends, and Tamarind was onezero’s biggest cheerleader when she went to blow out the candles. It’s not perfect, by a long ways. But it looks like the sisters’ friendship might last.

“Happy birthday, dear chicken hat, may you wish for a new wardrobe!”

Perfect is what onezero rolled for her adult trait: perfectionism.

And it fits perfectly. As a teen, especially once she began meditating and practicing yoga, onezero has developed an elegance and thoughtfulness which seems the expression of perfectionism. Cassandra, Tamarind’s great grandmother, was a perfectionist Sim, and that trait provided her with a thoughtful, careful quality.

She took a moment to contemplate her hand in space after spinning into young adulthood.

Perfection isn’t having everything–even relationships between sisters–go smoothly every moment of every day.

Ask my cello: sometimes perfection require tension. If the A string is not taut enough, it will waver out of tune. Sometimes, it’s the slight discord, the accidental drip of paint, the little happenings that seem not quite right that contribute to the whole to create something that different than we imagined, something alive with perfection.

“Did she just diss my chicken hat?”