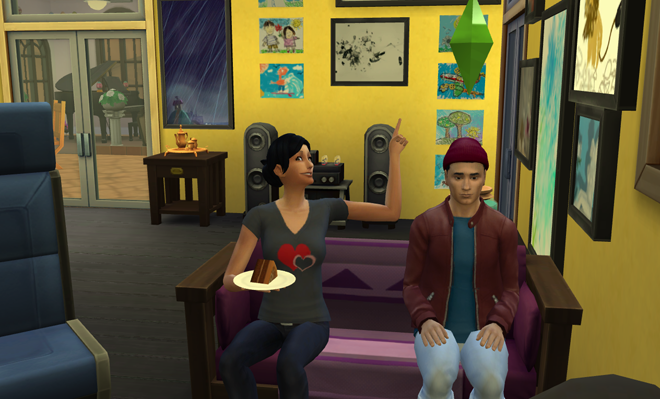 “Look! If it were any greener, he’d be platinum!”

“What are you doing now?” Doug asked a moment later.

“I’m checking out my own plumbob,” Tam replied. “Also green.”

Tam’s been doing this a lot lately, keeping tabs on her own and her family members’ plumbobs. I guess it’s one way to make sure the family’s doing well–after all, that’s one of the ways I check in on everybody, too!

Sugar, meanwhile, has discovered that the second time around, adulthood is twice as sweet. I often find her alone, sipping her inner bliss. She figures since both drinks feature slices of lime, they must go together!

“Inner bliss is one thing,” she tells me. “I’m more excited about sipping these drinks! It’s my own taste-test!”

Sugar’s making sure that she’s able to taste it all. Drink up, Shug! This is your life! “I’ve got a special fondness for white drinks now.”

While we were waiting on the newlyweds to roll a whim to “Try for Baby,” Nathanael went and got himself abducted. 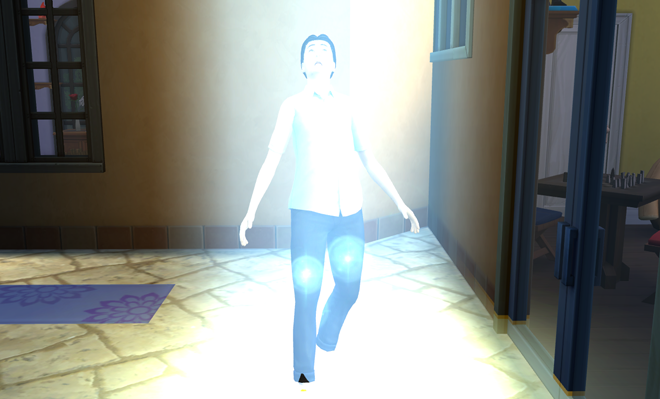 I’m doing quick calculations in my head–do we have room for an alien baby? Won’t onez be happy to have a new alien half-sibling? Will Nathanael be too dazed to be able to try for baby when he returns should Tam want to? 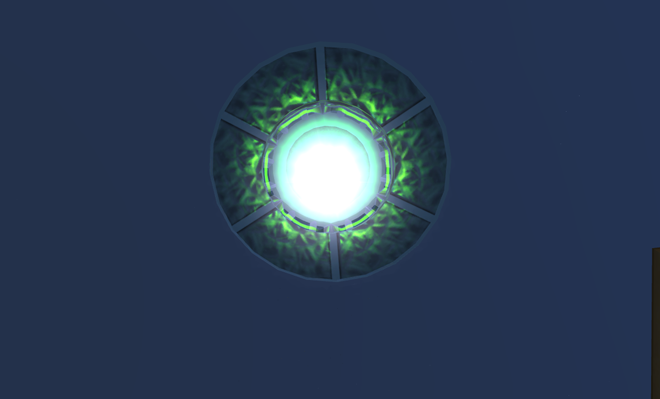 While he’s gone, I think about how very much I like this new Sim who’s joined the Bough family.

Before he and Tam were even a couple, on one of his visits, he went through the house and cleaned up all the dishes! This was before we even had a dishwasher! I love Sims who do the dishes with a smile!

And I finally figured out who it is he looks so much like–not Timothy–but Timothy’s son, the famous Mesquite Bough! Same pony-tail. Same eyebrows. Similar nose. Same narrow shoulders.

I feel that there’s a genetic pull–I know that I’m often attracted to Scotch-Irishmen, who look a lot like my great, great, great uncle. I wonder if Tam felt that somewhere deep in her coding a pull towards this man who in appearance and temperament, resembles her own great granduncle. “It’s kind of like looking through a dark mirror into the future.”

And before we knew it, Nathanael came back. I was prepared to give him a lot of extra care, remembering how Chandler suffered from PTSD after his abduction, but Nathanael was all smiles. He was a bit dazed, but he hardly even noticed. Mostly, he felt overwhelmingly happy from being newlywed and very inspired from the space adventure. Aliens! How exciting. 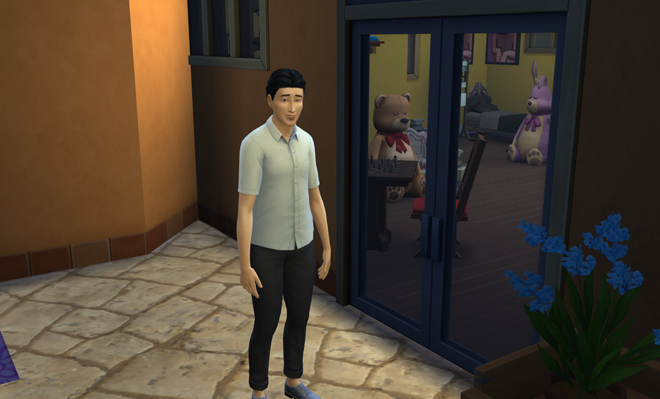 The next day was Tam and Doug’s adult birthday. I made sure they each had youth potion in their inventories, just in case they wanted to use it.

We decided we’d hire a different entertainer, other than Mesquite’s ghost, for I saw this interesting guy show up as a possibility. I think he was a childhood friend of Tam, all grown up and grown a beard. None of the other Boughs knew him. He’s cute, and I just had a hunch about him.

He was so excited to meet onezero–he’s an alienophile! I’ve discovered that it’s rare for Townies to love aliens. Most are afraid of them. But the entertainer was thrilled. 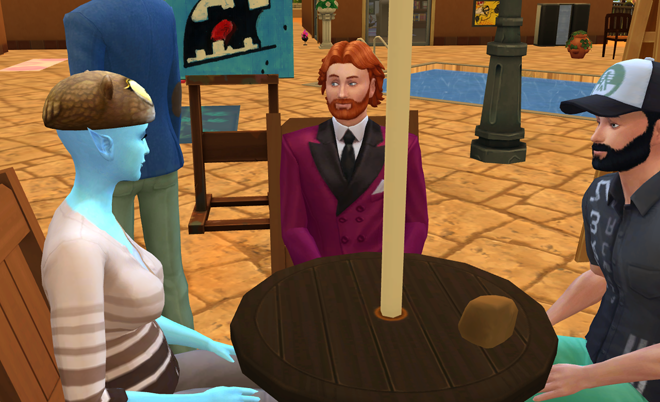 “You’re an alien? I’ve always wanted to meet an alien!”

“I worry about the musical notes sometimes,” onezero told him. “What happens to them? Where do they go after you play them? Will they ever be heard again?”

“Oh,” said the entertainer, “I never thought of it like that before. Would you rather that I never play? So you don’t have to feel sad that they fade?”

“No,” said onez. “It’s better to give them their existence, and for us to witness their fading into silence, than for them to never exist at all.” 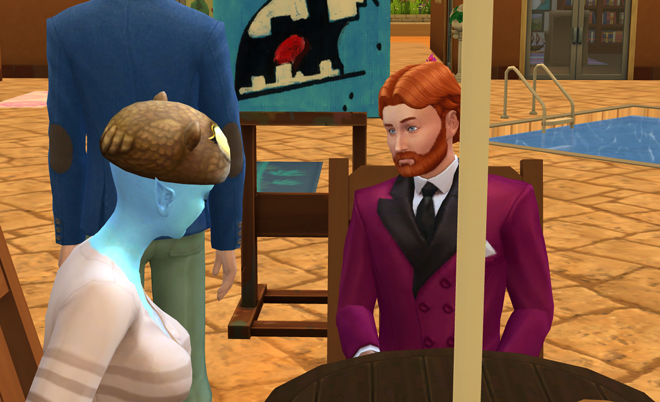 “My music will never be the same to me.”

I think he likes her. He was flirty all through the party. He’s romantic, but it just might take a romantic to be able to understand the poetry of onezero’s soul. I’ll need to remember to move him into the suitor’s mansion across the street with the other Townies who have shown interest in the Bough women.

Nathanael’s sister showed up during the party. Nathanael, we’ve discovered, was adopted, just like Chandler was. His sister didn’t seem to care much for this family that her little brother married into. She insulted Sugar and they got into a yelling match. Sugar laughed the whole time–I guess after Poplar, she’s not going to let someone else’s bad mood put a damper on her own good spirits. 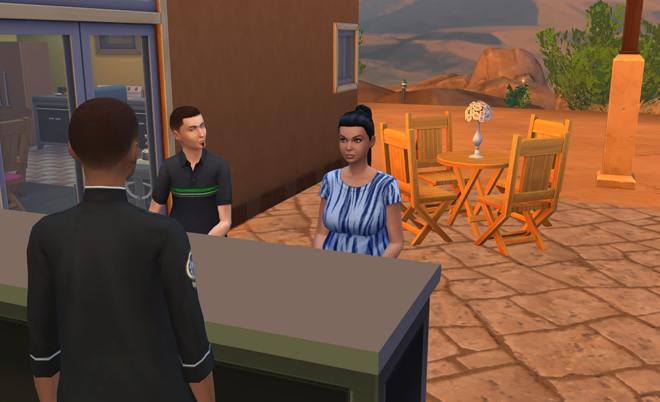 “You can’t even grow real hair. You call that fuzz hair?”

We waited until the last minute to have Tamarind make a wish. I wanted to give her ample time, just in case she wanted to drink that youth potion that was waiting in her inventory. 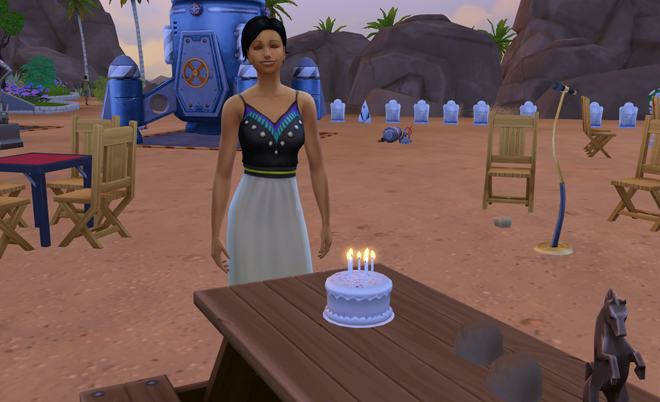 She’s keeping her wish a secret.

She looked so sure of herself after spinning into adulthood.

“I’ve been waiting for this,” she said. “I am so ready for this next step.” 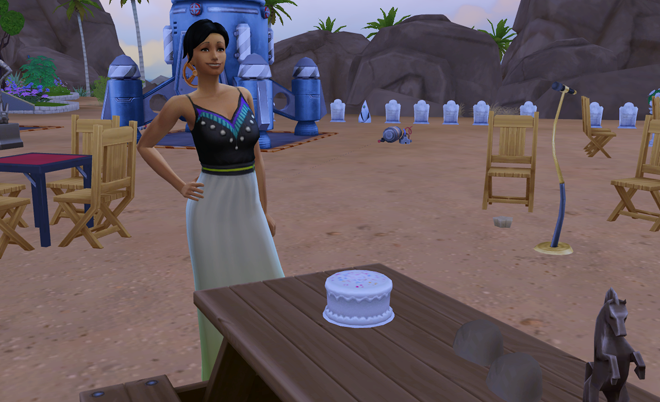 It was Doug’s turn next. He’s grown into such a fine young man. Yoga is filling out his upper body, and he’s got that gorgeous dimple in his chin, like his great grandfather I-dub.

Cassie seems to think he looks pretty sweet, too. Doug, can’t you see that Cassie is checking you out?

That evening, before bed, Tam found Nathanael painting at the easels.

“You mean the crickets?” he answered.

“No… though it’s got a regular beat like the crickets.”

“Oh, you mean the cowbell from our dancing cowplant out in the garden?” “I can hear… I can hear this distant buzzing! It’s been in my ears ever since I got back from space!”

“It’s my biological clock,” she said. “It’s ticking. I think maybe it’s time for you and me to start making an heir and a spare.”

He held her tight. “There’s nobody on this digital earth I’d rather make babies with than you, babe,” he whispered. Sometimes patterns repeat, sometimes we get a little variation. Right now, we’re just waiting to see if we’ve got one, two, or more nooboos queuing up to move into Cradle Rock.